We arrived at Seydisfjordur on the morning of July 23. Founded in 1848 by Norwegian fishermen, this is a very small town tucked between large mountains.  Its population is less than 1,000 and it is the easternmost port we visit in Iceland.  It was a base for US & British military during World War II, when Iceland was the hub of the convoy system for getting supplies to Britain from the US.  Iceland was where American escort ships turned back and British warships joined the convoys for the rest of the trip to Britain.  Today Seydisfjordur’s primary significance, as far as we could tell, is its status as the terminal for the ferry to Europe, which arrives and departs every Thursday. The name is pronounced SAY-dis-fyaw-der.

We left early on a shore excursion organized by our travel agents. It took us over the mountain pass above the town where there was still a lot of snow, even in July.  Our tour guide told us that they had a particularly large snowfall over the winter so the waterfalls were still flowing at greater strength than normal for this time of year.  This was good, because we have seen a lot of waterfalls on this trip, & more to come.  Before they built the paved roads through rural Iceland people travelled overland on horseback. Along side the current roads we often saw piles of stones in fairly regular intervals that used to mark the horse trails. Our guide told us that it was considered bad luck to use these paths and fail to add stones to some of the piles, so they were maintained in very good shape. 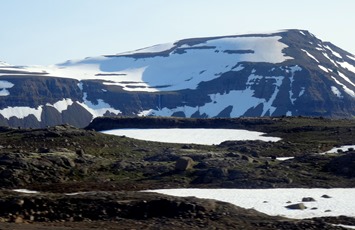 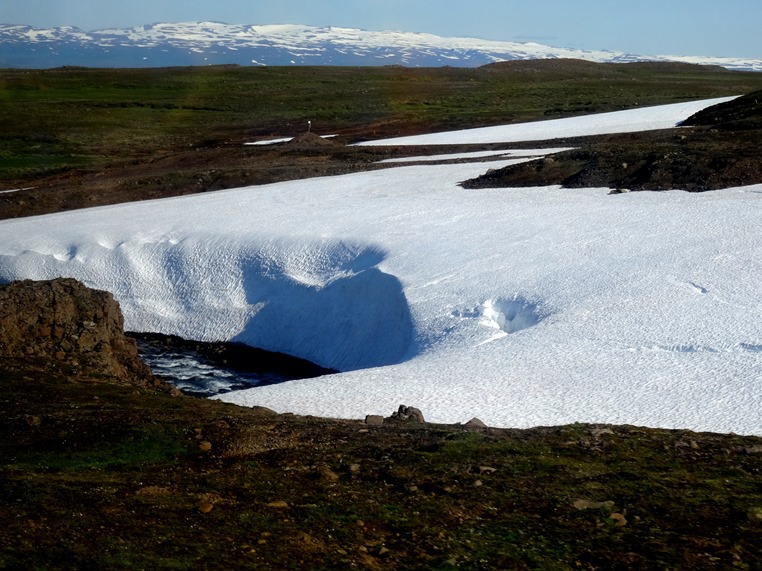 Descending from the mountains our first stop was in a little town called Egilsstadir. The bus was full & we had to sit in the very back where it was hot & stuffy, so we were glad to get out for a few minutes, but the purpose of the stop was a mystery. We parked in a parking lot by a supermarket & there did not seem to be anything of interest here.  We strolled through the supermarket & a gift shop, then we all got back on the bus & drove on. 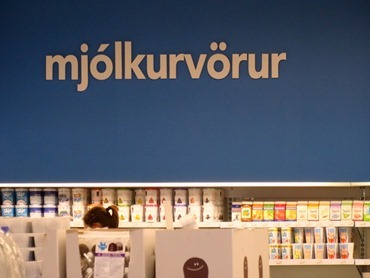 We drove along the river for a while, then stopped to view a waterfall . . . on the other side of the river.  We didn’t get out of the bus for that brief “photo opportunity,” since we could see it perfectly well from our seats. I believe the guide said this was one of the tallest waterfalls in Iceland. We also saw a mountain in the distance that our guide said was the biggest in Iceland outside the glaciers. 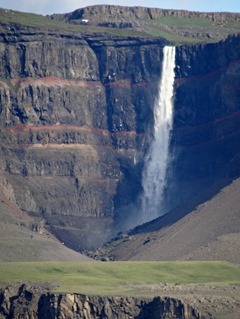 We drove on (and on) along the river. Finally we crossed over and came at last to . . . a nondescript little church. It turns out this is where our guide grew up. He said it is only used for weddings and funerals now, not weekly services. There was once a 13th Century (I think) church on this spot, but the one there now was built in the 1960’s & looks it.  Apparently its outstanding feature is its front door, which is a copy (!) of a very old carved door now housed in a museum we didn’t visit. Mary looked through the churchyard and found some very old graves though. 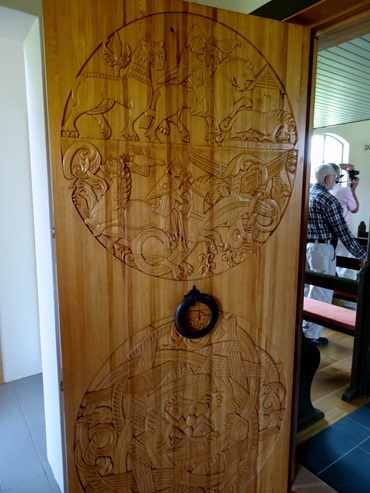 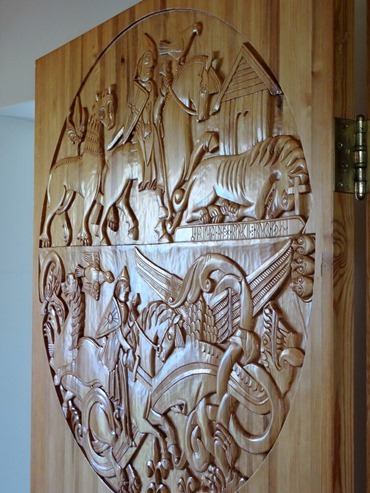 We continued further down the river valley to visit the house of Gunnar Gunnarsson, a writer well known in Iceland. His name means he was Gunnar, son of Gunnar.  Icelanders generally don’t have family names like we do even today.  Instead they are given a first name coupled with a patronymic (although it is permissible now to use a matronymic, especially for single mothers). Under this system my son would be Robert Richardsson & my daughter would be Carrie Richardsdottir.  In the phone book people are alphabetized by first name, then within that class by patronymic.  Its an odd system to us & it sometimes gives them trouble when abroad, such as when applying for visas, but it is well established here & is not really dissimilar to that used in other countries in centuries gone by.

I don’t know much about him, but we were told Gunnar Gunnarsson was nominated for a Nobel Prize (but never won one).  His first book was published about 100 years ago. This is a house he bought late in life & .never finished renovating. Its most interesting feature (to me) is its grass roof. We have been told that grass is an excellent insulator, but I wouldn’t want to have to get up there to mow it! We were given coffee and donuts & gingersnaps in a nice courtyard, but it was kind of chilly and windy.

Nearby we visited a visitor’s center.  It wasn’t too interesting, but had a deck with a distant view of the valley.  There were a lot of wildflowers on the hill & some ways away was a horse farm.  Icelandic horses are prized work horses because, although they are small, they are very strong & tough. I mentioned once before that Icelanders sometimes let them fend for themselves over the winter, which is not easy to withstand here.  They are descended from the horses brought over by the original Viking settlers and to ensure the breed remains pure it is illegal to import horses to Iceland from anywhere else. Even a horse born & raised in Iceland cannot be brought back here if it is once sent abroad.  We were told that Icelandic horses have an additional gait beyond those of other horses.  The most obvious distinguishing features we noticed are the very full mane of thick hair and pointy ears. 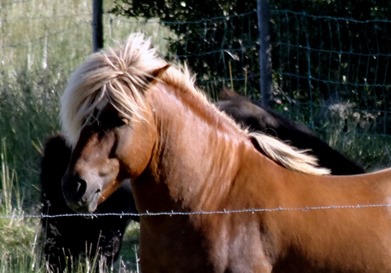 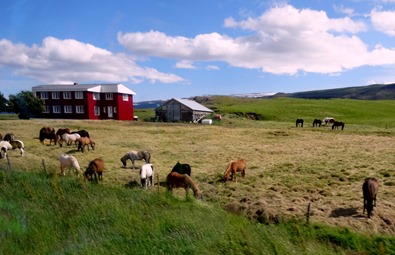 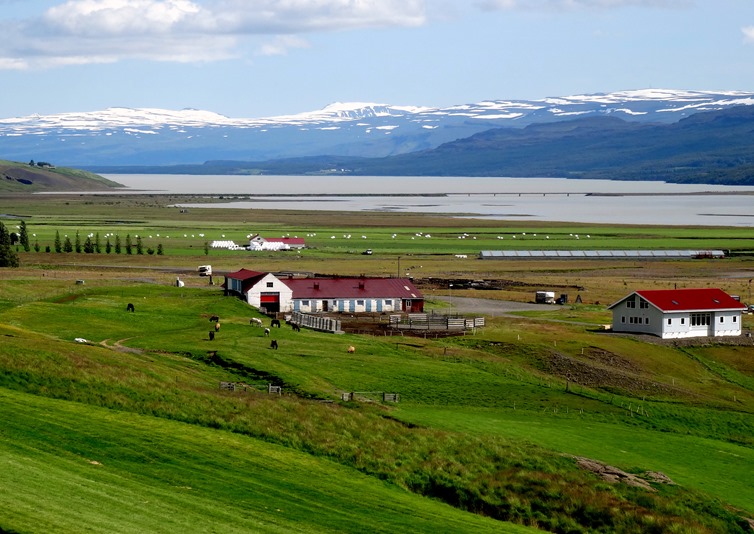 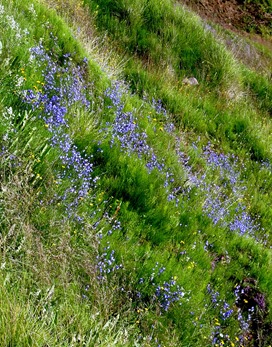 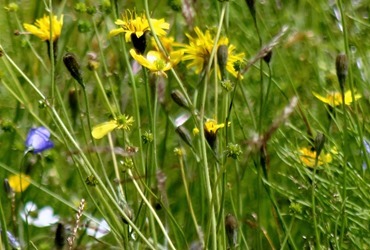 After this we headed back toward Seydisfjordur. We stopped at the top of the mountain pass where there was a waterfall & an overlook of the town. A dramatic view. 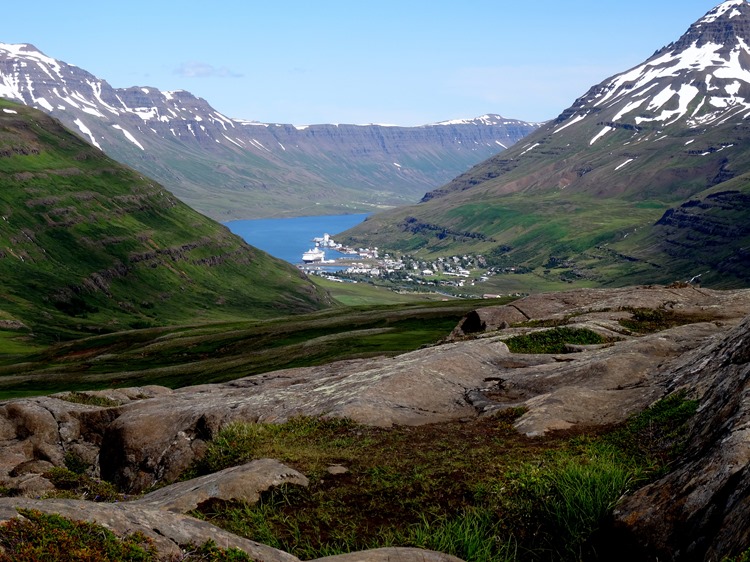 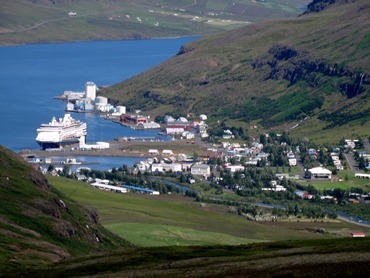 We descended from there into Seydisfjordur. The excursion was rather a disappointment, since there was little of real interest to see & the bus was hot & uncomfortable.  To their credit, in response to the general dissatisfaction our travel agency refunded a good portion of the cost. And its not like there was a whole lot to see in Seydisfjordur that we missed by taking the excursion.  After we returned we had time to walk all around the town & get back to the ship well before it was time to depart. So here are some views of Seydisfjordur from the ground. 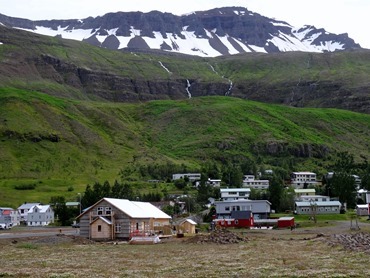 The one building in town that we entered was the blue church, a nice smaller church pleasantly decorated inside.  It also has an impressive pipe organ for such a small and isolated church. 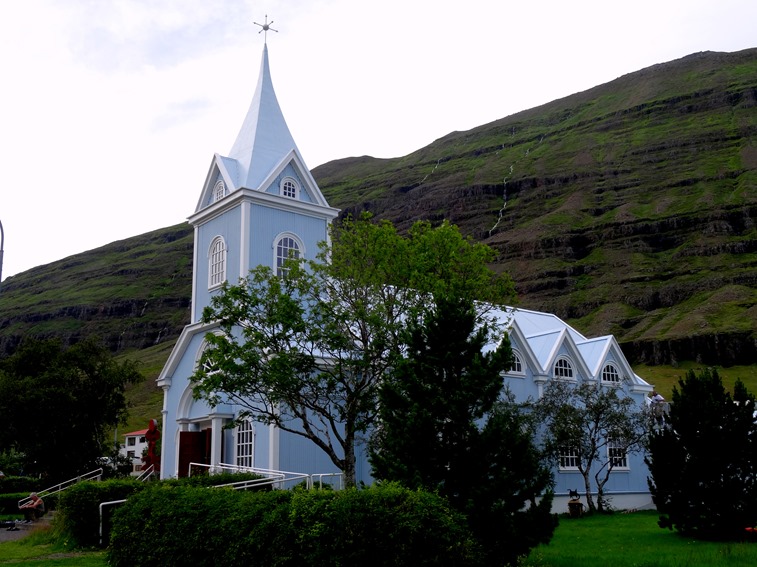 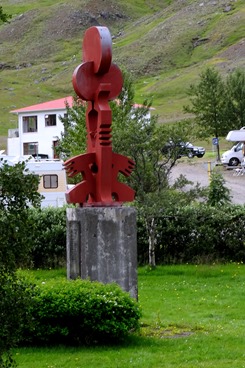 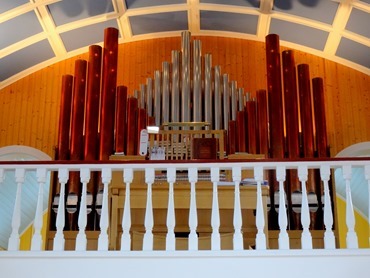 Last but not least was a whimsical collection of wood sculptures, most of which appear to be trolls, and one of the biggest & floppiest flowers we have seen so far on this trip..

And so we took our leave from Seydisfjordur, sailing out through yet another beautiful fjord and ending our visit to the northern part of Iceland.  But still there were towel animals, of course. 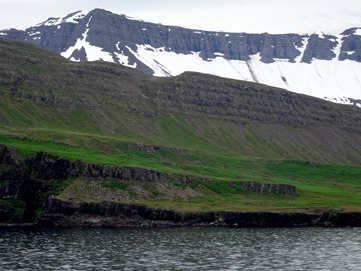