This is just a quick post to let our friends & family know we are still alive & kicking.

Since we last posted we have been visiting New Zealand & Australia.  The weather has not been kind to us, but so far we have missed only one port: Port Arthur, Tasmania (Australia).  We have had a lot of cold & rainy days and quite a lot of heavy sea turbulence, particularly rounding the southern end of New Zealand and now in Tasmania.  We visited Hobart, Tasmania, on the 13th with a very nice day. But the Captain decided to shorten the visit & “get out of Dodge” because a big storm was coming toward the west coast of Tasmania.

We turned around at 9:00 PM & headed out the river & then back up the east coast of Tasmania, then turned west at the top.  Winds and sea turbulence have been all that he predicted and more, with 26 foot waves that reached the 5th deck and winds that reached 86 mph, hurricane (or cyclone here) level.  So we have been rocking & rolling and doing our best to keep on our feet when walking.  The Captain says he still hopes to make it to Penneshaw on Kangaroo Island tomorrow, but at noon rather than 8:00 AM as scheduled because most of last night we “hove to,” meaning the ship was not moving because the turbulence was too bad to make any progress.  We are not convinced that a stop at Kangaroo Island, a tender port, is in the cards but we are keeping our fingers crossed.

Anyway, New Zealand was great & only one of the ports was a repeat for us (Auckland).  We cruised through Fiordland National Park on the South Island, and Milford Sound was especially impressive.  Unfortunately, Rick got sick the day before we reached Sydney, so other than the sail in (gray & cloudy, alas) & a night at the Sydney Opera House to see Carmen, he spent the two days in Sydney in bed.  One expects some setbacks on a four month world cruise, and this was easier to take because we had been to Sydney before & had seen quite a lot after a magnificent sail in.  If all this sounds too negative, we really don’t mean to complain because, after all, this is a world cruise; just giving a status report.  Even the rocky seas are something of an adventure!

So here are just a few pictures from this segment of the voyage. 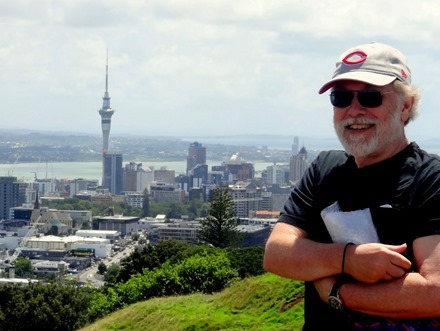