We spent our 2d day in Hong Kong, March 4, exploring a different part of central Hong Kong island.  We spent some time in two narrow shopping streets filled with vendors, Li Yuen St East & West.  Here you could purchase anything from clothes to souvenirs to food, at very reasonable prices. 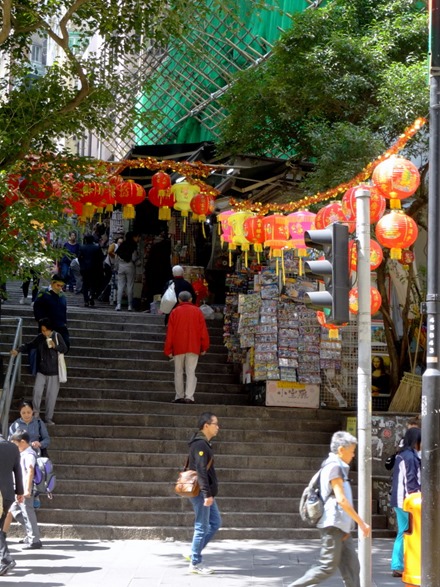 In 1994 Hong Kong opened the world’s largest escalator system.  It consists of more than 25 lengthy covered escalators set end to end in a continuous line up to the middle of the side of Victoria Peak.  Designed for commuters who live uphill & work downhill, the escalators run down for a couple of hours in the morning & up the rest of the day.  The lower escalators are really tilted moving sidewalks since they lack stairs but the upper ones are actual escalators.  We rode all of the escalators to the top of the system . . . but then we had to walk all the way down (on stairs next to the escalators) since the escalator only runs one way. 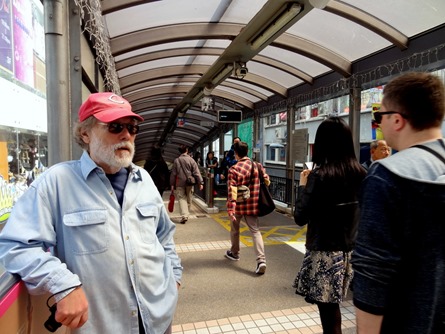 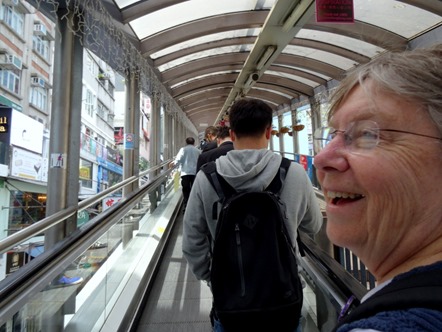 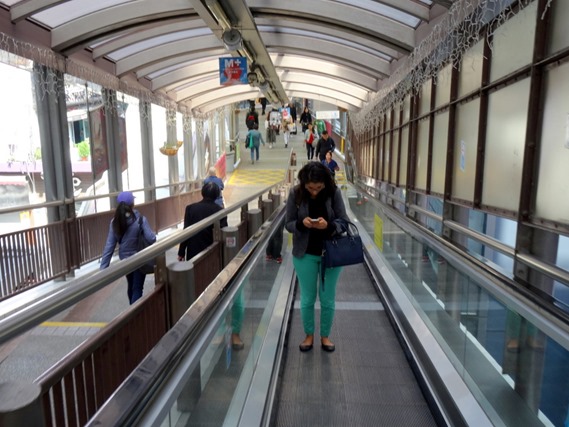 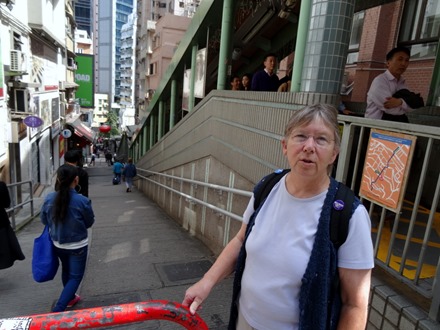 After descending the hillside we walked around a number of streets on Hong Kong’s west side.  The ambience here was quite different from Central, where everything is presented in two languages in a continuation of Hong Kong’s English heritage.  This section of town had little English and fewer high rises.  There are shops here selling food, ginseng, bird’s nests, live snakes (a folk remedy for cold weather), tea, herbal medicine & food.  Often we had no idea what was on display, usually in plastic bags, because they were labeled only in Chinese.  We did walk down one street populated by vendors who make “chops” to order.  A chop is a block of stone that is an ink stamp, & you can have one made with your name in Chinese characters (although I doubt many purchasers can tell if their name is correct on the stamp).  In this area we passed Western Market, a Victorian built in 1906 as the waterfront Harbor Office.  Nowhere near the water today, it has a tacky shopping mall inside.  We stopped for some coffee & rolls & to rest our feet in that old Chinese institution, Starbucks. 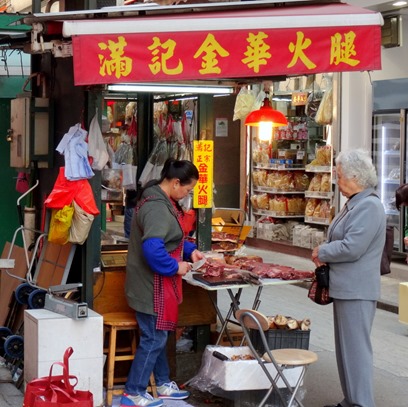 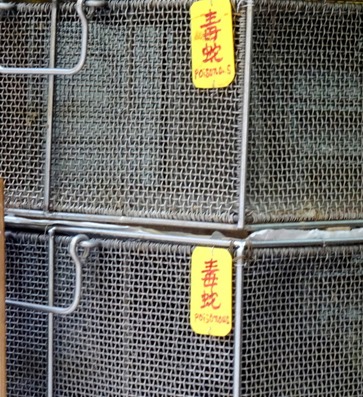 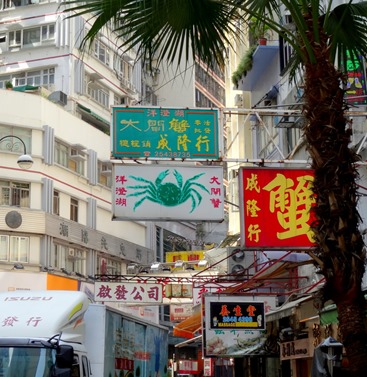 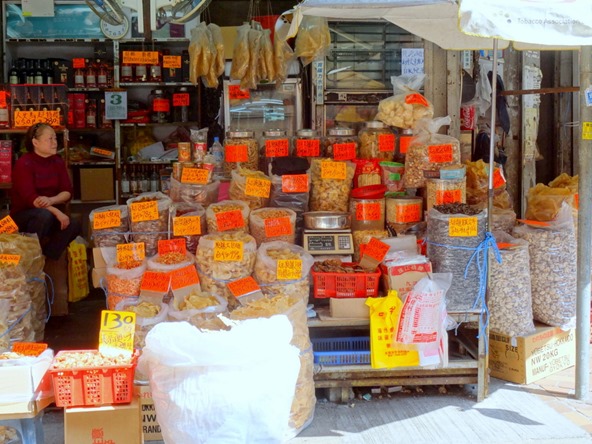 In this area were tall tenements, with washing hanging from the balconies. They didn’t look very pleasant. 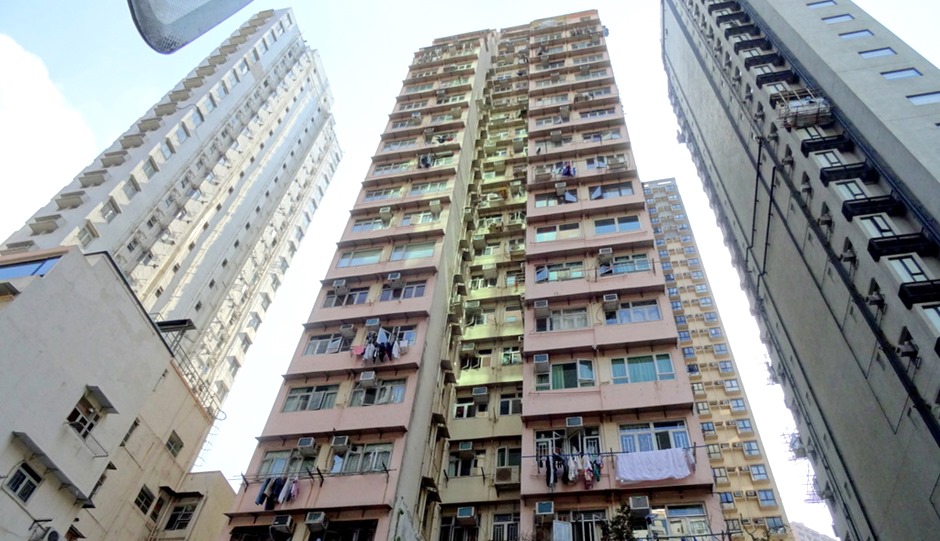 We walked up Hollywood Road to a park on Possession Street, which is the location where the British first landed in 1841 to take possession of Hong Kong after the Opium War.  It was on the water then but (you must be guessing this by now) it is far from the waterfront today. 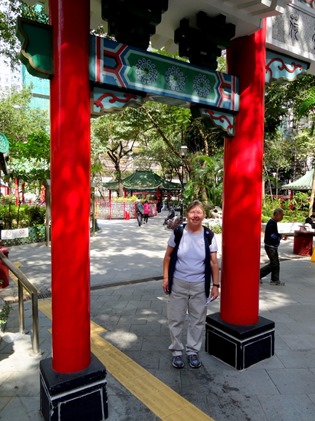 We walked through Cat Street and up Ladder Street (the whole street is steps up the steep incline) to reach the Man Mo Temple.  This area was lined with very expensive looking shops selling jade, antiques & silver & gold.  One silver emporium was catering to the Star Wars crowd.  Man Mo Temple was built in the 1840’s & is dedicated to the god of literature (Man Cheong) & the god of war (Mo Tai), the latter reputedly popular with both the police & criminals. The spiral incense coils hanging from the ceiling (purchased by worshippers) can burn up to 3 weeks, & all the smoke made us yearn for a relatively quick exit.

We walked over to see the old police station, originally built in 1864, which is located in a neighborhood with Victorian homes.  The homes were all undergoing restoration, so there wasn’t much to see beyond the police station.  We then walked back to the ferry, perusing some vendor streets on the way, & returned to the ship.

We were told there was only one junk left in Hong Kong’s waters, but in the evening we saw two of them from the ship.  We walked over to a nearby restaurant with our Sydney Opera friends Bruce & Cindy for a really delicious Peking Duck dinner.  When we returned the Hong Kong cityscape was lit up again, and tonight Debbie Bacon played and sang on the top deck with the city lights as a background.

Finally, tonight there was a show on the ship by Chinese performers.  There was a musical duet of two women playing string instruments, a dramatic dragon dance in which a very long paper dragon was operated by about 10 guys holding sticks attached to it & a pair of women dancing with long ribbons.  Finally a man whose superpower was changing masks while you watched without being able to see the change.  This worked & I don’t know how, but I suspect that there was some kind of mechanism in his elaborate headdress that made it possible.  Altogether a short but interesting & entertaining show. 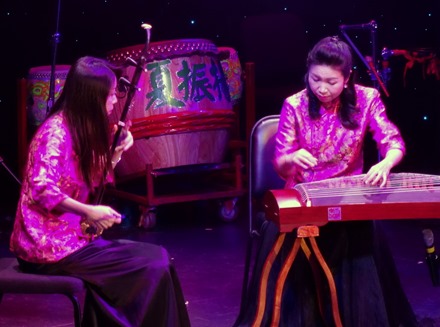 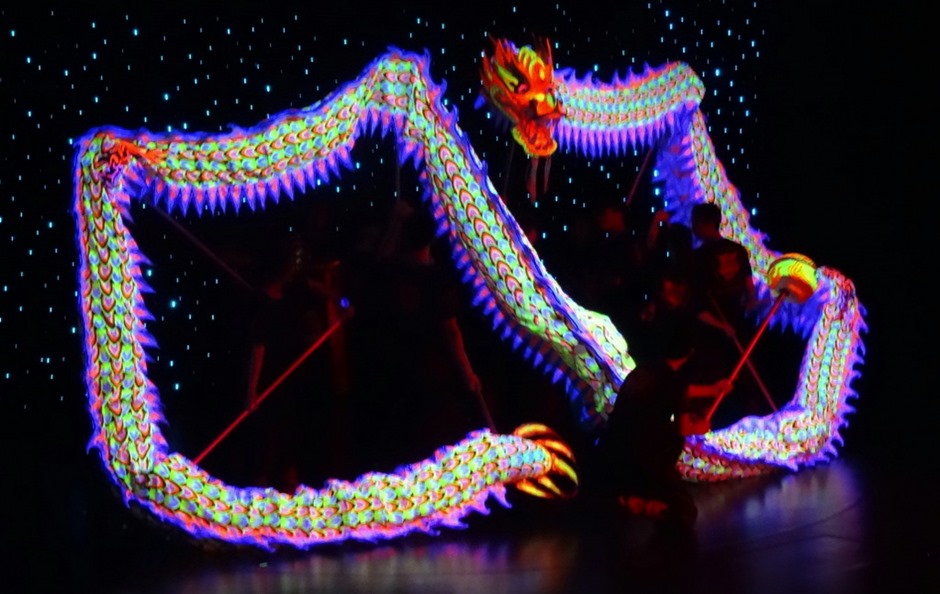