[Note:  As I write this we are at home.  As you can see, the blog fell behind a bit in the last portion of the trip, but rest assured that the entire thing will be completed, despite all the competing demands on our time here in our natural habitat.  Hopefully, it won’t take too long, although we are leaving town again in June for a few weeks.  It should be completed by then, but who knows?]

On April 9 we docked in Haifa, Israel.  When we visited here before, https://baderjournal.wordpress.com/2013/05/01/israel-day-2-jerusalem-to-haifa/, we arrived at night after a two day tour of Israel and thus had no time to see the city.  This time we took an excursion to the ancient cities of Caesarea and Akko that was promised to finish with a visit to the Bahai Gardens in Haifa.  But to our disappointment it didn’t.  So after two visits we have not had a chance to see Haifa at all beyond the view from the port.  Maybe next time.

Located on the coast halfway between Haifa & Tel Aviv, Caesarea was initially built on some Phoenician ruins by Herod the Great in the last two decades BC.  Named after Herod’s patron, the Emperor Augustus Caesar, it was an important port & served as the capital of the province of Palestine under the Romans and Byzantines. It was conquered by the Muslims in the 7th century & then by the Crusaders in the 12th.  The Crusaders were ousted in 1265 by the Mamluks, and the town then lay largely uninhabited until 1884 when a group of Bosnian Muslims settled there.  It was occupied by Israelis at the beginning of the 1947 war, when the remaining occupants were expelled and the village houses destroyed.  Since then the area has been largely devoted to archaeological excavation, and is owned today by a foundation.  A lot of these ruins have been reconstructed & it is difficult to tell what is original and what has been added.  There are about 5,000 inhabitants in the area.

Our first stop was on the beach outside the town where a Roman aqueduct traverses the beach.  This is one of three aqueducts that served Caesarea. It has two channels, built at different times, which are visible from below as a seam in the ceiling of the arches.  An impressive structure, it originally extended some 11 miles. 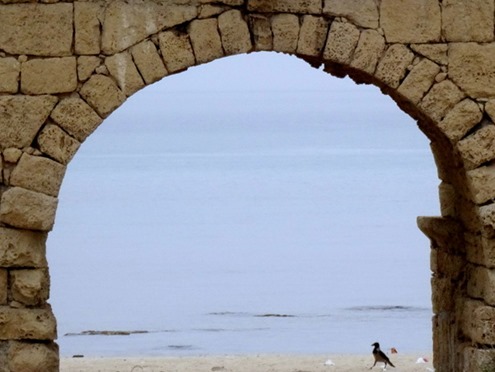 Our first stop inside the city was at the Roman theater.  It has been restored and often hosts concerts.  While we were sitting in the seats another group of visitors standing on the stage sang a hymn.  It was very nice, but seemed a little out of place in a Roman theater. 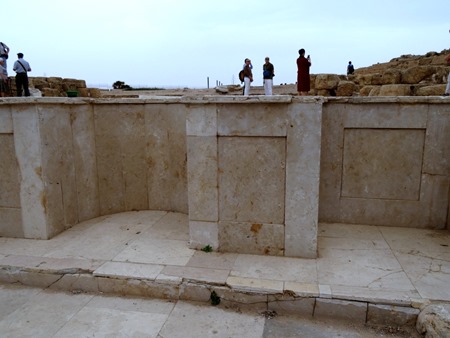 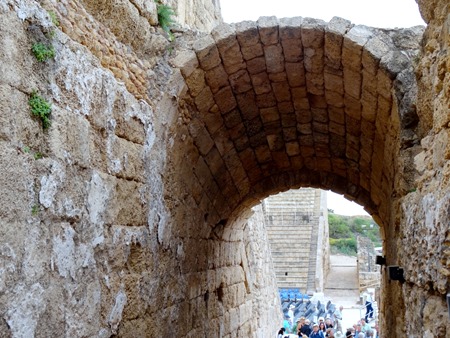 After viewing a movie we walked down to the harbor, which is broad and picturesque.

On the left of the harbor are the ruins of the palace built by Herod that was the residence of the Roman governors of the province.  Notably visible is the swimming pool built on the edge of the sea.  A stone was unearthed near here inscribed with the message that “Pontius Pilatus” had erected a building dedicated to the emperor Tiberius. Part of the palace was later partitioned into private quarters & the palace was abandoned entirely at the end of the Byzantine era. 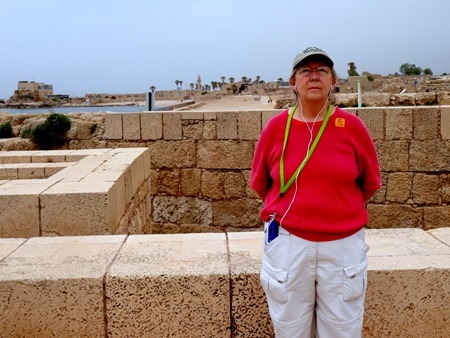 In the middle, facing the harbor, was the Hippodrome, built in 9 BC and described by Josephus.  The “Actian Games,” instituted by Herod & named for the naval battle in which Augustus defeated Marc Antony & Cleopatra to claim the empire, were held here every four years.  In addition to athletics & gladiatorial combat, they included chariot races that went seven laps of this track, one of the largest in the Roman Empire.  One part of the wall in front of the grandstand was covered by faux marble fresco, but we couldn’t tell whether that was original or a modern demonstration of something that might have been there. 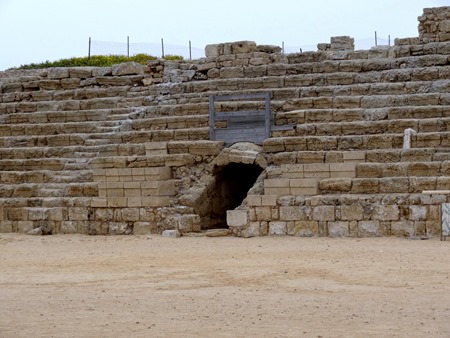 Beyond the hippodrome was a complex of walls of various buildings, some with (rebuilt?) archways. 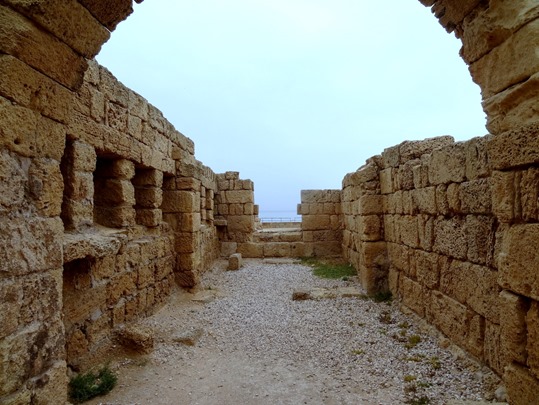 Some of the buildings in this area had mosaic floors (some reproductions?) that must have been beautiful when in use. 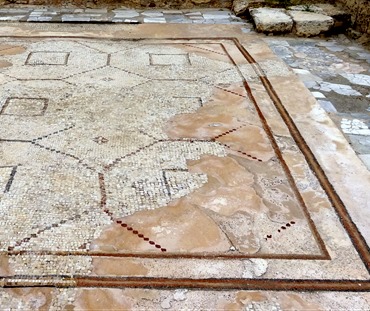 Of particular note is the public bathhouse, which is particularly well preserved (or restored), with marble columns & mosaic floors.  This was a public meeting place where, in addition to bathing, one could exercise & get a shave, haircut or massage. 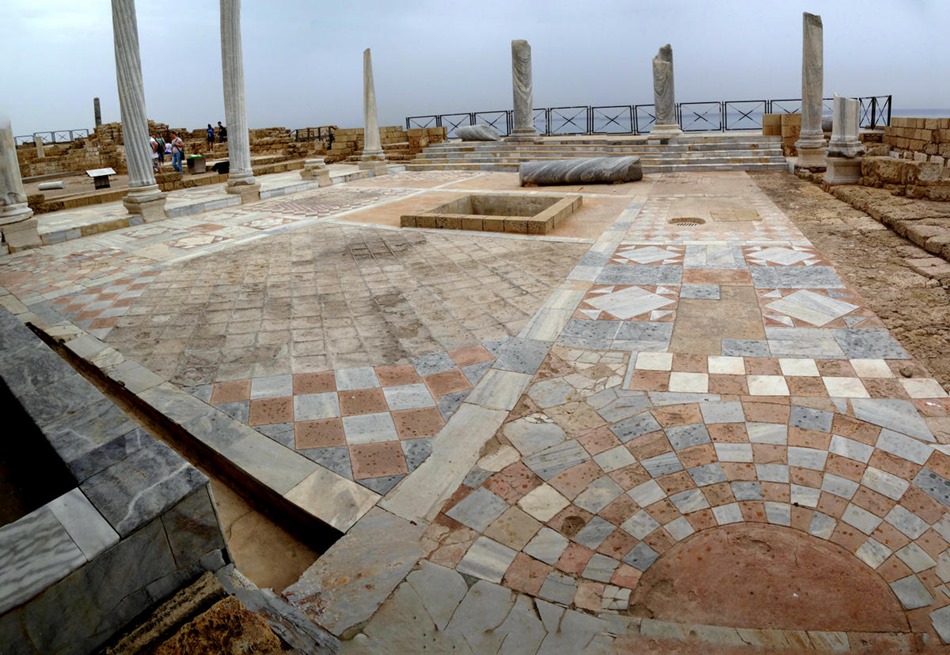 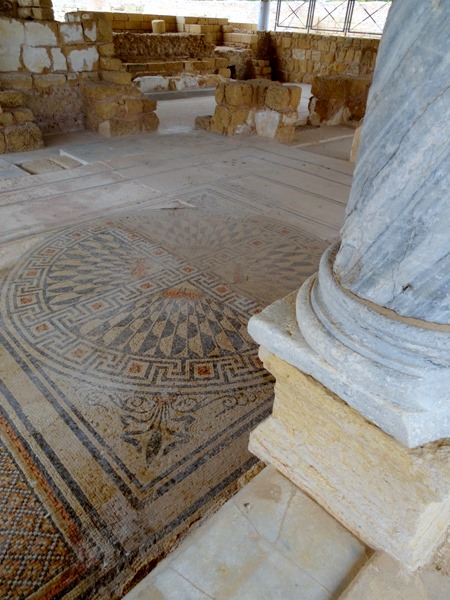 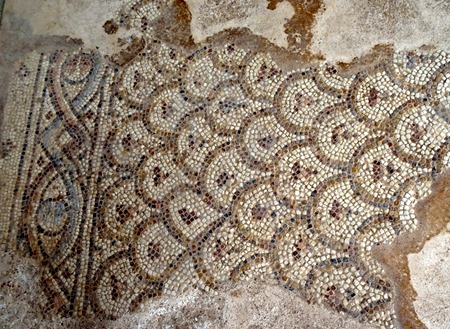 On our way to a huge & delicious lunch in a restaurant near the water we walked along the city wall built by the Crusaders, complete with moat.  Near the restaurant we saw some Roman sculpture & the minaret of the mosque built by the Bosnian settlers in the 19th century.  No work was being done because it was Saturday, the Jewish Sabbath.  Across from the restaurant was a hillside covered with ongoing excavations called the Crusaders’ Market, thought to contain houses & commercial buildings. 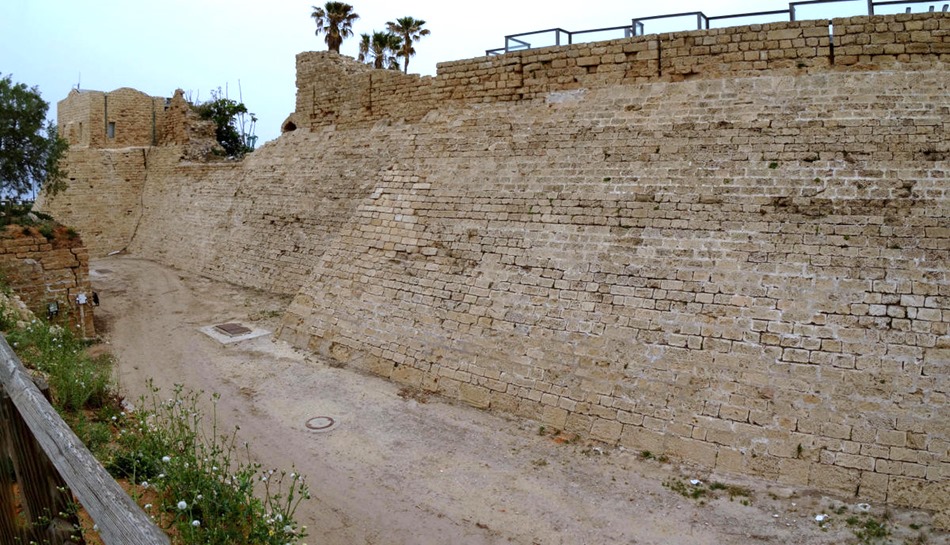 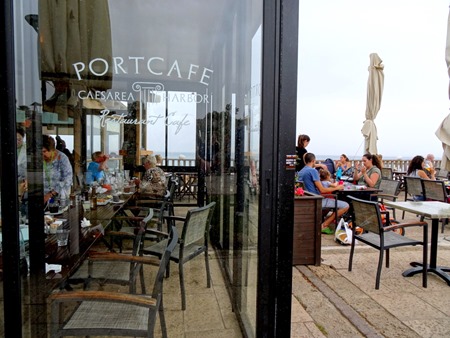 After lunch we left the city through a gate built by Crusaders, designed with sharp turns inside to deter invaders, and boarded the bus for the trip to Akko. 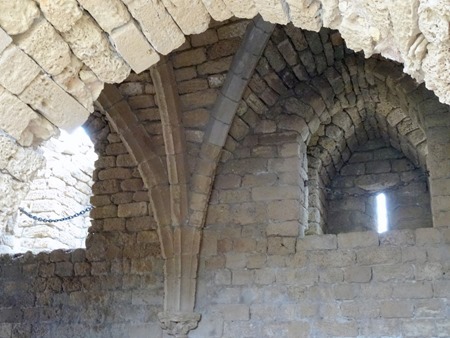 Before leaving Caesarea, here are some of the flowers we encountered there.

First settled about 5,000 years ago, Akko is one of the oldest continuously occupied cities in the Middle East.  During the Biblical period it was a Phoenician city.  While Akko is its official name today, it was known as Ptolemais during the Hellenistic through the Byzantine eras & as Acre during its occupation by the Crusaders.

Acre was an important port in the middle ages under Islamic rule starting in the 7th century.  It was captured after some four years of siege by the Crusaders in 1104 and became their main port.and provided great wealth to the Crusader Kingdom of Jerusalem.  Saladin recaptured it for Islam in 1187 but in 1191 it was restored to the Crusaders by forces under Richard the Lionheart of England & Philip II of France.  They retained it until 1291 when the Mamluks took over.  Acre was the last Crusader foothold in the Middle East.

Our first visit was to the ruins of the fortress built in the 12th century by the Knights of St John Hospitallers.  It was unearthed in recent times under a prison built by the Turks.  A number of Zionist underground fighters were imprisoned here by the British during the period after World War II when the Zionists were pushing for independence, and some were executed here.  Apparently in the movie Exodus Paul Newman’s character was imprisoned here.  In 1947 the Irgun, Zionist independence fighters, broke into the prison & released the Zionist inmates (and more than 200 Arab inmates as well).

Inside the fortress were several halls and/or chambers with vaulted ceilings, all nicely lighted with historical exhibits and some art on display, called Crusader Halls.  Our guide told us that before the underground fortress was discovered there were rumors of underground passage.  Some of the Zionist prisoners dug down through the floor of their cell & discovered a bit of stone ceiling of a room filled to the top with dirt.  Obviously this was no use for escape, but it was apparently the first modern evidence that the Crusaders’ fortress was still there. 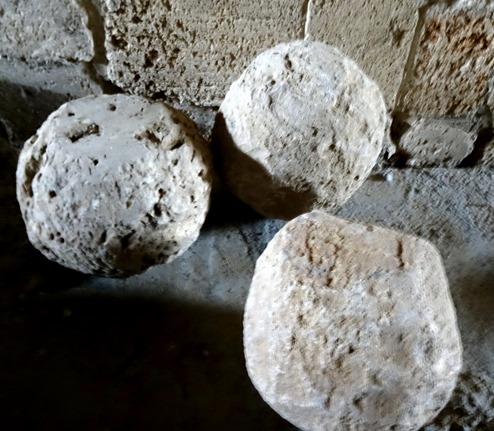 The largest Crusader hall is the Refectory, or dining hall. 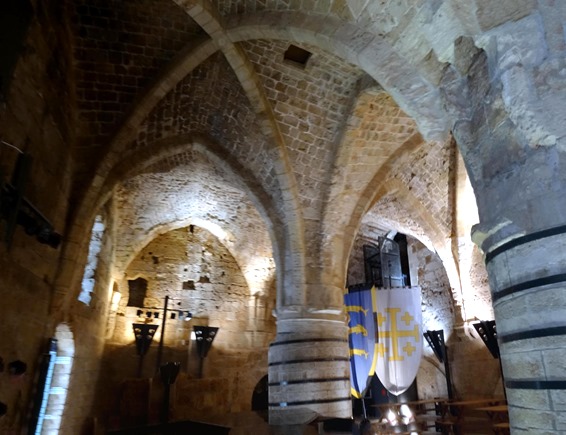 Under the Refectory is a tunnel.  There is a famous tunnel here that leads to the waterfront, thought to be a means of escape in the event of a successful attack, but this was not that tunnel since it ended in what was once the Crypt of the Crusaders’ Church of St. John.  The Turks used this area as a post office.  This tunnel was very narrow & there were parts where even short people like us had to bend over to avoid the ceiling.  It was fairly dark in the tunnel & we were moving the whole time, so the pictures are a little unfocused.  As should be obvious, Mary was in front of Rick in line.

We walked up some steps to the street level where we passed through a shop & into a corridor that seems to have been part of the old prison.  Today it is something of a shopping mall, with restaurants & shops (many closed for the Sabbath).  We left through the souk, teeming with vendors & shoppers, & walked back to the bus through the very crowded streets.  Then we drove back to Haifa, without stopping at the Baha’i Gardens.

We sailed that night to Ashdod, the port nearest Jerusalem.  But we had visited Jerusalem & Masada, the prime sites in that area, just three years ago.  https://baderjournal.wordpress.com/2013/04/27/israel-day-1-ashdod-to-jerusalem/.  We thought about going into Ashdod for a look around (it is a very ancient port city), but Mary was still not recovered from the desert fever she picked up in Dubai & we were both quite tired.  So we stayed on the ship & treated it as a sea day in the hope that some extra rest would prepare us for the port-intensive run through the Mediterranean (7 ports in 9 days).