After a rough day at sea, we arrived this morning at Castro, a town on Isla Chiloe (chee-loe-way) off the coast of southern Chile.

A sharp contrast to Santiago’s teeming millions, Castro has between 20,000 and 30,000 people and its green hills are a welcome change from the deserts of the last week.  It’s a small port so I imagine it gets few cruise ships, but it seems to have a thriving tourist trade since there are lots of hotels & restaurants.  Established by (who else) the Spanish in 1567, it was then isolated from all European interaction for 200 years after the local Mapuche people drove the Spanish out of the southern Chilean mainland in 1599.

Built on the landward side of the island (the 2d largest island in South America after Tierra del Fuego), Castro was pretty much destroyed by an earthquake & tsunami in 1960.  The buildings here are mostly wood, painted a variety of bright colors.

The cathedral, opening (as usual in South American towns) onto the Plaza des Armes, is painted yellow with a purple roof.  Because of the unusually high and low tides buildings by the shore are built on stilts and are called Palafitos. 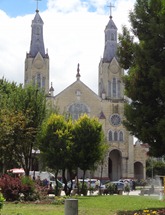 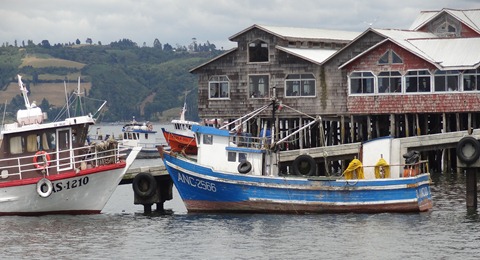 As you can see, it was very low tide when we were there; some boats were on the beach waiting for the water to come back to them.

We walked all the way up the very steep hill to the cathedral.  You can see how steep it is from this sidewalk up the hill, which is actually a stairway.  If you look very closely, there are two people walking up, near the top of the stairway.  They are not us; we took an easier route.  Walking back down we passed a couple of dogs in front of a restaurant having a great time chasing cars slowly climbing the street, trying to bite their tires, then returning to the restaurant to await the next driver.  Mary turned to me and said “valet barking.”  I wish I had thought of that one.  Also here are a few other random shots of interesting things in town, like a cow sculpture, some graffiti & a mime playing an accordion.  Finally, today’s towel animal, a cobra. 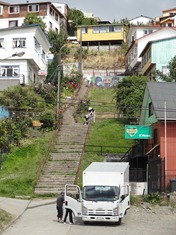 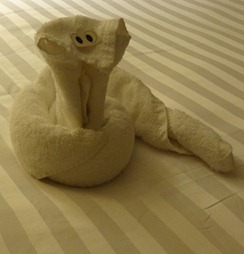