On Tuesday,  January 17. we visited a port called, poetically, General San Martin.  Its not much in itself, as you can see. 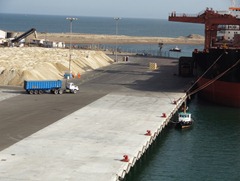 It is located on a sort of large rounded peninsula, described evocatively by the ship’s travel guide as a “carbuncle on the coast of South America.”  Up the coast a few miles is the city of Pisco, which was devastated by an earthquake a few years ago & is still not fully rebuilt.  But the big attraction here (at least for us) is Isla Ballestras, sometimes described as a poor man’s Galapagos.  While it is hardly the rich nature preserve that the Galapagos are, it is a wildlife sanctuary that is home to an unusually diverse and numerous collection of bird and sea animals.  One guide told us that this area of Peru has more diversity of species of wildlife than anywhere else in the world.  I’m not sure about that grandiose claim, but its pretty impressive.

We took a speedboat to Ballestras holding about 25 people from a little town not far from the port called Paracas.  It seems to be building itself into a resort town but is still a pretty sleepy place and, as you can see, it is on the edge of a rather bleak desert.  We did, however, enjoy its outdoor statues of a penguin & a sea lion. 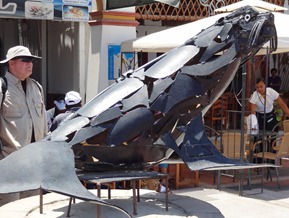 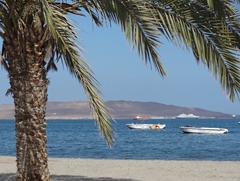 After boarding the boat & donning our life jackets the first place we came to was an ancient cliff drawing called the “candalabra” or “trident.”  It is quite huge and very old, created by ancient indians, but no one knows why it is there or what it is supposed to represent.  It seems to point directly to the Nazca lines (landscape drawings much further inland by the ancient Nazca indians, the shape of which can only be seen from an airplane) but it is not now thought to be related to them. 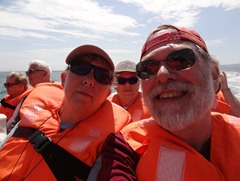 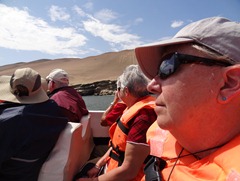 Then on to Ballestas, about a 25 minute trip at high speed over choppy ocean waters.

So now, before we get to the wildlife you are all waiting to see, my sad story.  We were told that we needed to worry about our hats on this trip.  You need them not only for protection from the sun but for protection from bird droppings.  There is a strong wind while speeding to the island so I put my Cincinnati Reds baseball cap on backwards to avoid having it blown off (as you can see in the picture above).  Well, when we got to the island there didn’t seem to be much wind anymore, so I turned the hat around.  Almost immediately a gust of wind came along & blew my hat overboard!  The guide tried to retrieve it with a pole but the waves were too choppy.  So now my hat sleeps with the fishes.  Worse, the lack of a hat led to a bad sunburn on my face & the top of my head where my hair used to be (I hadn’t put sunscreen there or on my face because my hat was always sufficient protection), which was probably made worse by windburn on the trip back from the island.  As a result I have been feeling pretty sick over the last few days, which Mary attributes to sunstroke, although now it is starting to get better.  Enough about me.

As you can see below, Ballestras is completely covered by hundreds of thousands of birds of many varieties.  Its a pretty impressive sight. 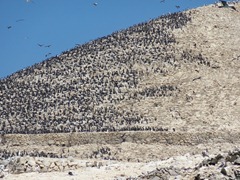 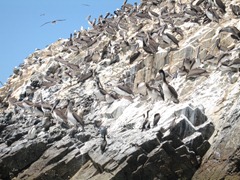 Herewith some photos of a few of the various species of which I managed to get pictures from a seriously rocking boat.  Pelicans & a Kelp Gull: 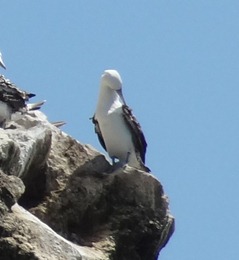 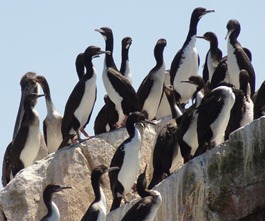 And my favorite name, Peruvian boobies: 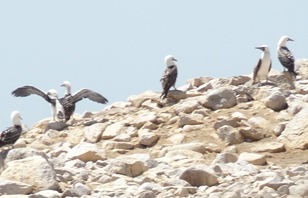 This striking red-headed bird was not in the bird guide we were given, but it looks to me like some kind of vulture.  The one on the right is eating what appears to be a fish. 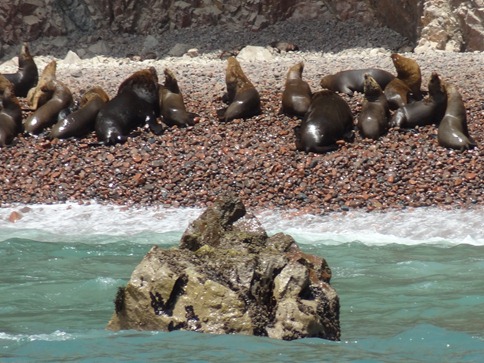 The sea lions are very loud; there is a constant bellowing coming from the group.  I don’t know if they do that all the time or just when there is a boat nearby.  In the next picture the shadows at the bottom are full of yelping sea lions & some birds, while the white rock is covered with birds.

Well, all these birds are gathered in one spot & you know what birds do best.  As a result, this island is very rich in guano (bird droppings) which makes excellent fertilizer (it also makes this island really stink).  So every 7 years they harvest the guano from the island.  There is a pier built for this purpose which, like everything else, is usually covered with birds.  When the Spaniards first collected and shipped guano from here to Europe it caused something of a revolution in agriculture there.

This area of Peru, and really most of the coastal area of Peru & northern Chile, is a desert area.  In this general area of southern Peru & northern Chile (mostly further inland) is the Atacama Desert, which is the driest spot on the globe.  It literally never rains here.  We were told that this is the reason all the Indian ruins are so well preserved, particularly the adobe mud bricks & the mummies that would have deteriorated badly in a more temperate environment.  But the desert hills around here are sometimes quite beautiful, showing a variation in color and light & shadow, particularly at sunset. 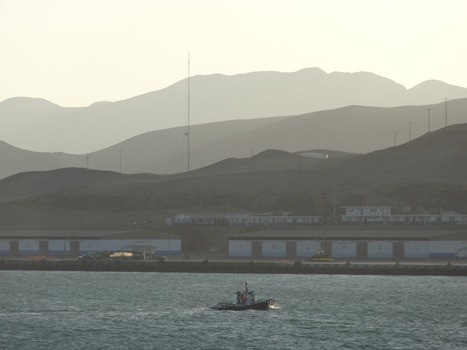 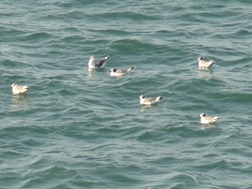 Looking out at the water before sailing we saw a whole lot of these huge brown jellyfish (left above) floating by; Mary thought they might be Men-o-war.  And gulls floating on the water; mostly they fly around, then suddenly dive-bomb straight down into the water after fish, but that happened too quickly & unexpectedly to get a picture.  We also saw a squadron of Pelicans flying in a V formation, just a few inches above the water.  They looked very military in bearing, but again no picture since I didn’t have my camera out in time (d’oh!).

I want to keep you up to date on the towel animals and bread sculpture as well, since we have been enjoying them.  Our best towel sculpture by far to this point has been the hanging ape, which we didn’t notice for several minutes after entering our room because it wasn’t on the bed like the others.  The cornucopia is all bread (with, I presume, some food coloring), despite what it looks like.

January 18 was a sea day then on January 19 we docked at Matarani, a very small port in southern Peru.  I think this is the first time Holland America has visited here & it appears that they get little or no other cruise traffic.  The port itself is pretty, but there is nothing else there except more desert.

The nearest spot of real interest is an old Spanish colonial city called Arequippa but it was an all day bus trip to see it, with 2 1/2 hrs on the bus each way, so we skipped that.  (Actually, with the way my innards were acting, I never would have made it that far without a rest stop.)  The cruise line was operating a shuttle bus to the closest town, a small town called Mollendo which really had nothing to distinguish it.  The shuttle took us through rather barren desert for half an hour, with narrow bumpy roads often hugging the sides of steep hills. 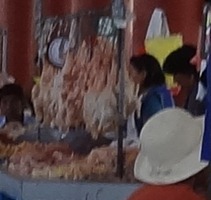 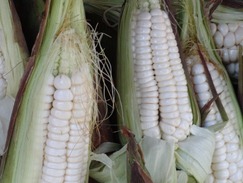 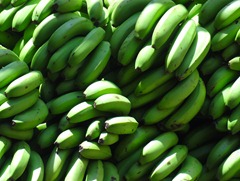 Mollendo also had the inevitable church and a central plaza.  Below right is a picture of Mary walking along a street of food vendors which is, as one of the passengers kept saying, “evidence that we were there.” 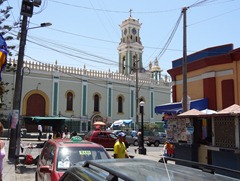 So basically nothing special here, but it was interesting to walk around a real Peruvian town that is not set up to cater to tourists.

That brings us up to date (today is a sea day & tomorrow we will dock in our first port in Chile).  Before leaving Peru, there is one thing I meant to show you earlier; it doesn’t have anything to do with Mollendo but I am going to put it here anyway because its the only place left.  For those of you interested in elections, it seems that they had elections in Peru last year.  A whole lot of people were running for President, it seems, and political signs were everywhere, in Trujillo & Lima especially but also in Paracas.  Peruvians paint their political signs on walls (there are walls along most streets and hardly any buildings have a front yard without a wall in front of it, often with barbed wire, broken glass and even electrified wire on top of the wall).  The signs are still there, of course, even though the election is long over, & I guess they will stay there until someone pays the owners of the walls to paint something else over them.  It makes you glad to have all the crappy little political signs we have in the US that look so bad but can at least be cleared away from the landscape once the election is over. 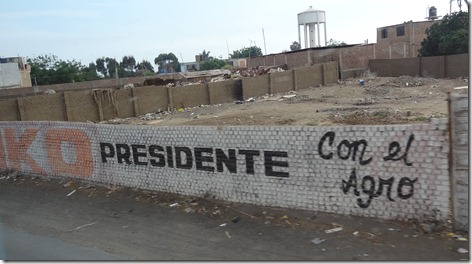 And one last interesting thing we saw all over Peru was a large number of these little 3 wheel cars.  We had never seen them before but they are everywhere here, quite often with this kind of original paint job. 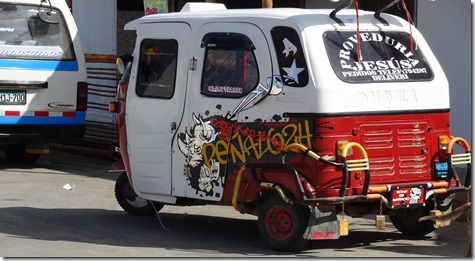 That’s it for now.  See you in Chile in a few days.