The morning of January 30 found us docked a couple of miles north of Punta Arenas, Chile.  Because another cruise ship was due in that day Prinsendam had to move out into the harbor to make way at the dock.  So while we left by the dock for our excursion to see the Magellanic penguins at Seno Otway (Otway Sound), we had to return by tender boat from the center of town, which suited us perfectly.  Punta Arenas means “Sandy Point,” which was the name of this place until the Spanish took it over.  It has between 100,000 & 150,000 people.

The main thing here for us was penguins.  You can’t come all this way and not see some penguins.  We went on a shore excursion to Otway Sound, about an hour from Punta Arenas (on a bumpy unpaved road), where there is a rookery of Magellanic penguins (named, obviously, after the Magellan Strait where they breed).  The place is on private farmland and you have to walk on a boardwalk for about half a mile across some pretty barren land to get to the penguins. 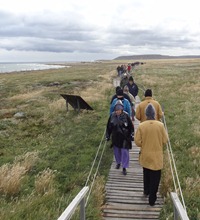 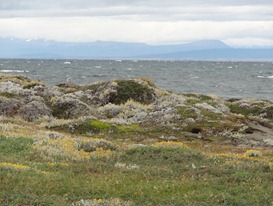 Magellanic penguins mate for life (which can last 30 years) so you usually see them in pairs.

Note that these are not all the same penguins; each pair is different, although they look remarkably alike.  There was also a penguin chick (this was near the end of mating season and all the penguins will be gone in another month or so).  He still has light gray feathers with a mostly white head and some fluffy chick feathers still on the back of his neck.  It was funny to see his parents chasing him around, scolding him (“You get right back here, young man!”), although because he was bigger than they he mostly ignored them.  The chicks have to grow up fast; in a few weeks all the penguins will leave & have to fend for themselves in finding food and swimming. 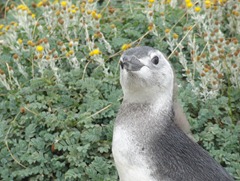 On the beach nearby a lot of penguins were gathered, presumably to look for food. 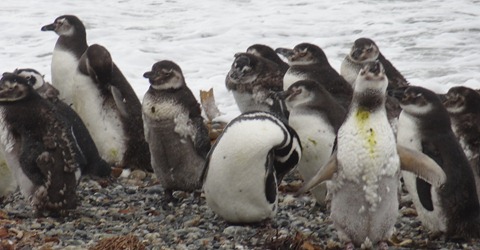 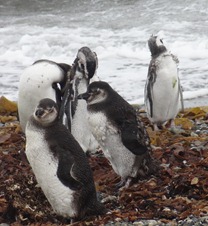 And here are a few more, just because I have them.  They look like they have big smiles on their faces.

Near the penguin rookery we also saw some Rheas.  They are relatives of the Ostrich and I am told that crossword puzzle fans will be familiar with them (or at least with their name). 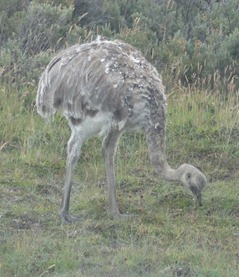 While the Otway Sound area looked pretty bleak from afar, with no trees or bushes, if you looked closely there were some striking wildflowers close to the ground. 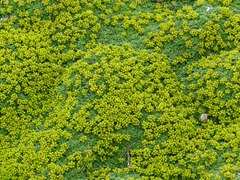 From Otway we went into Punta Arenas, passing on the way a forlorn looking  antique car museum in the middle of nowhere (literally); I can’t imagine how it gets any visitors.  In Punta Arenas there was, of course, the Plaza de Armas. 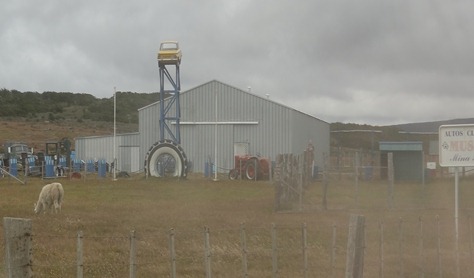 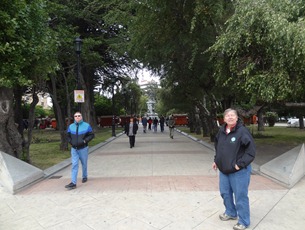 In the Plaza de Armas was a monument to Magellan (the city is, after all, on the Strait of Magellan).  Across the street was the church & around the plaza were a number of interesting buildings with vintage architecture. 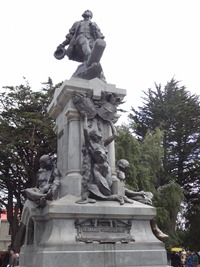 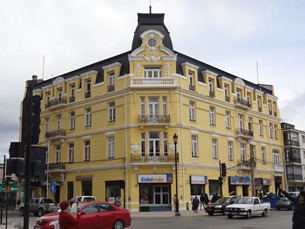 Two more statues: one of Bernardo O’Higgins, one of the leading generals of the South American independence struggle.  You will recall statues at previous ports of tuna and penguins & seals; here there is a statue of the tail of a whale, which can be found in the Strait of Magellan (but not by us, alas).  There was also a lovely rainbow over the harbor after we got back to the ship. 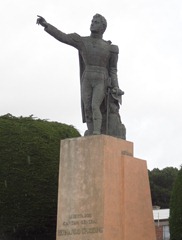 And finally for today, a look at some old pictures of the original inhabitants of this area, all of whom are long gone.  The pictures are outfitted with reproductions of the masks they produced.  You will note that they painted their bodies all over (I don’t actually know if that is paint or tatoos).  More interesting, however, is that they lived in this area stark naked (if you look closely, you can confirm this for yourself), and believe me it gets cold here (its summer now, & still pretty chilly).  Clearly, they were made of sterner stuff than we are.

January 29 was a ship day as we sailed through the Strait of Magellan toward Punta Arenas.  The Strait cuts all the way through the continent several hundred miles north of Cape Horn and, as you might have guessed, Fernando Magellan was the first European to go through it.

In the morning we saw our first glacier, called the Amalia Glacier.  Most of the glaciers down in this area have been shrinking for the last 200 years, but faster & faster over the last 30 years or so.  The Amalia Glacier is the biggest one we have seen in South America (I expect we will see more in Antarctica). 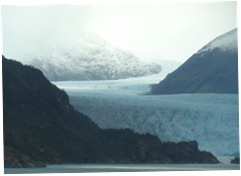 The front wall of the glacier, which you can see above, is about 200 feet high.  On the first small picture, after the one with Mary in it, you can see an island in front of the glacier.  If you look very closely, there are fairly tall evergreen trees on top of the island, so that gives you an idea of how high the glacier wall is.

We continued through the Strait of Magellan after that.  It is lined with impressive hills and mountains but it was pretty overcast & hazy, so the pictures really don’t show the mountains very much.  We could see them in person, though, & the swirling clouds around them gave a mysterious air to the whole affair. 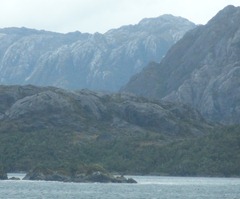 In the afternoon we came to a shipwreck from 1969.  The story (perhaps apocryphal) is this:  The convention at that time for instructing the helmsman was to say “all left” or “all stop” or “all right” or “all ahead.”  It seems that a crew member made a proposal about something to the captain, who agreed, saying “Alright.”  He said it a little too loudly and the helmsman immediately turned the ship to the right, directly into the big rock you can see in the first picture.  It reminds me of the people who follow their GPS directions onto a railroad track or into a lake.  I guess (hopefully) they now say “all starboard,” rather than “all right.”  Anyway, no one was killed in the mishap, but apparently no one saw any reason to clear it away either. 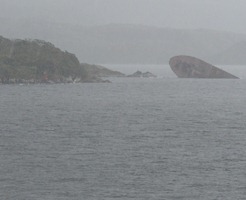 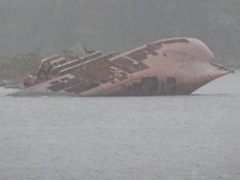 We spent the rest of the day cruising toward Punta Arenas, with some small lighthouses spotted on top of hills by the water. 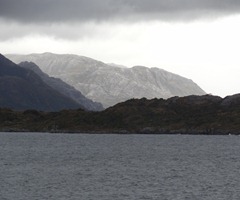