Madeira (day 2), Around the Island

On our second day in Madeira we were on a private bus tour that took us throughout the western portion of this beautiful island.  Madeira really has everything: seashores & fishing villages, cliffs & mountains, flowers rocks & surf.  This was a long (8 hours) tour & we visited a number of places, so this post is going to be mostly made up of pictures (I’m sure you are grateful to hear that).

First we visited the picturesque fishing village of Camara de Lobos, a favorite vacation spot during the 1950’s of Winston Churchill, who liked to paint the scenery here.  The town was full of beautiful plants & flowers.  I wish I could name all the flowers, but I can’t (as you will see from the captions). 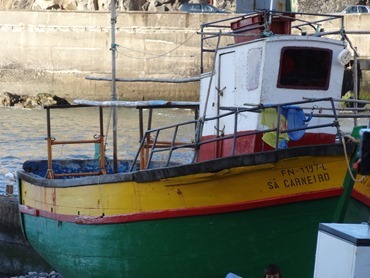 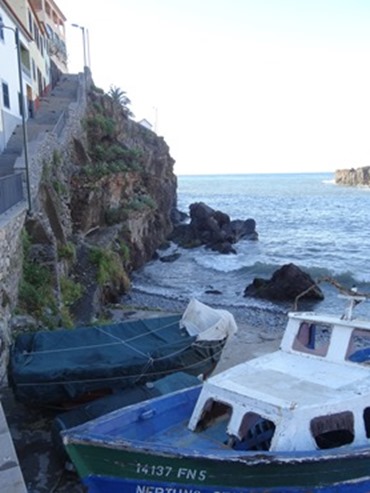 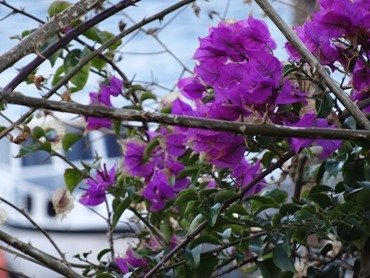 A little further along the coast we stopped at Cabo Girao, at 580 meters the second highest sea cliffs in the world (our guide thought the highest might be in Taiwan, but wasn’t sure).  There is a glass platform to walk on extending out over the cliff. 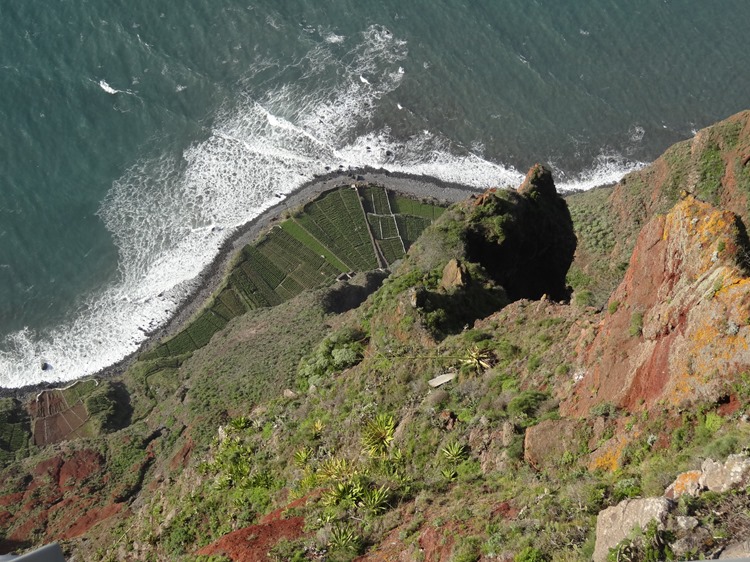 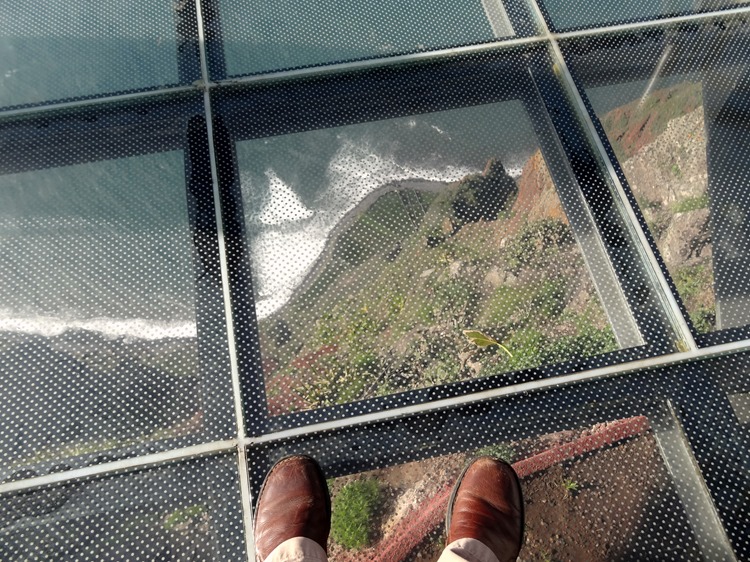 OK, next was Ribeira Brava, a small resort town (village).  They had a lot of construction going on, apparently moving rocks & rubble from the river to the shore, where they are building up the area behind their sea wall, which held off a roaring surf.  There was a lovely little 16th century church, all dressed up for Lent.  Mary bought a t-shirt here with an embroidered bird of paradise on it – less than half the price asked for the same shirt in Funchal. 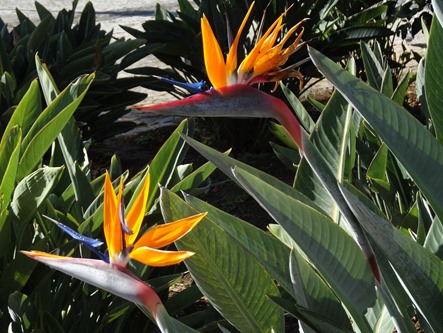 Next we drove way up into the mountains and, after a stop for some photos & to visit a tourist store, we drove across a relatively flat, soggy high plans called Paul da Sierra.  It was really foggy during this part of the trip, so very few pictures (and much sleeping).  I may have mentioned that, in addition to wine, Madeira is known for its fine embroidery.  Not cheap though: we saw an embroidered table cloth in a Funchal window selling for about $9000.00!  And you know that if you bought it someone would spill the wine the first time you used it.  In the mountaintop shop was some nice embroidery selling for hundreds rather than thousands of dollars, but we took a pass anyway. 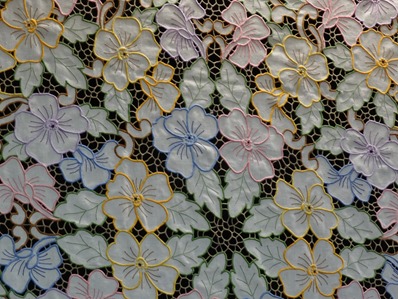 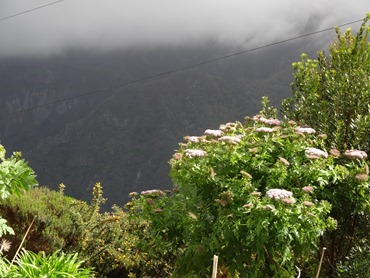 We stopped for lunch (marinated tuna for us) in the little village of Porto Moniz on the northwest tip of Madeira, about as far (47 miles) from Funchal as you can go without getting wet.  About 4000 people live there.  We stopped for pictures on the mountainside above the town, but the best views were at the ocean where the surf pounded some fabulous black rocks.  Madeira is a volcanic island (some say it is what is left of the lost continent of Atlantis) & we saw quite a lot of volcanic rock, natural and used to build walls & buildings.  I mentioned that the whole island is heavily terraced for houses and small fields, and you can see below some of the terracing above Porto Moniz with grape vines (not yet green) on some levels. 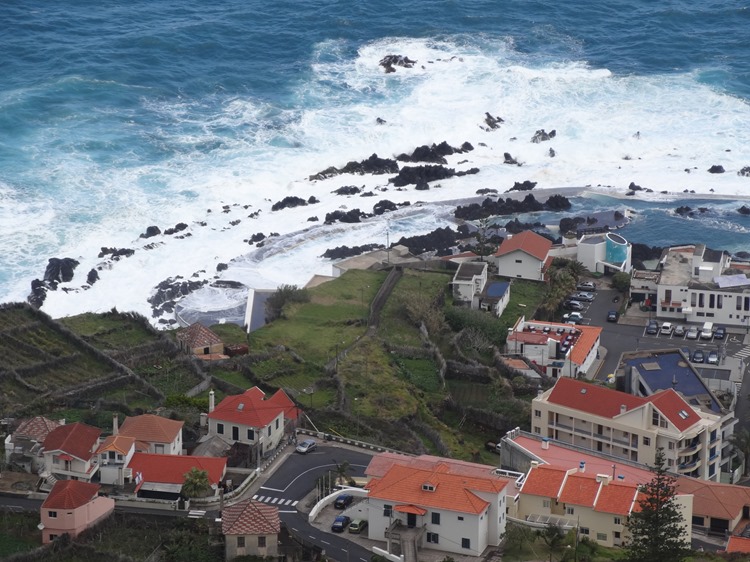 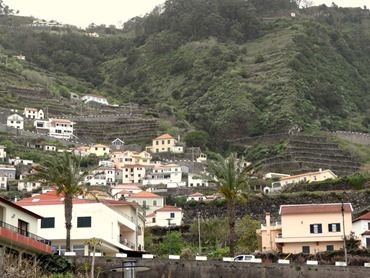 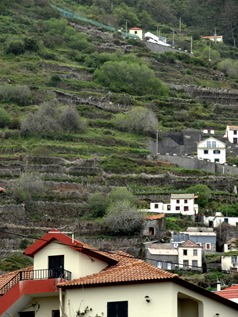 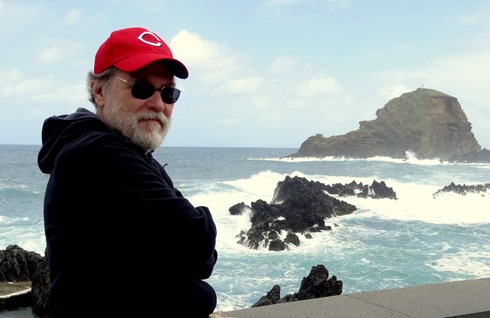 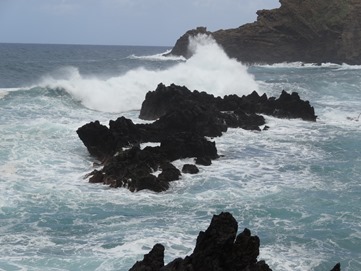 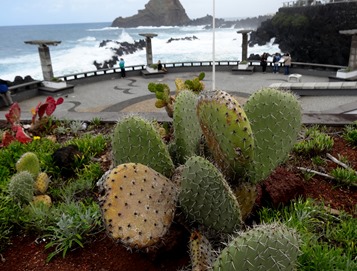 You are probably wondering by now how many more stops, but there are just two more.  Seixal is a very small village with a profusion of wildflowers on the hillside, including a whole field of wild lillies.

And finally, Sao Vicente.  This village was originally at the seashore, but was repeatedly pillaged by pirates.  So in the 16th century they moved the whole village inland about a mile & rebuilt it in a valley behind some cliffs & rocks where it could no longer be seen from the sea. 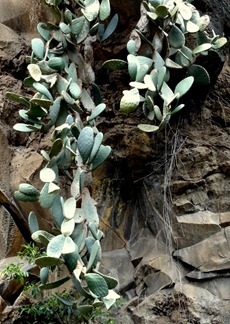 And so back to Prinsendam, well in time to make the all aboard deadline of 4:30.  But then the Captain announced that they were about to replace the capstan on one of the engines, a huge piece of metal that could prove dangerous at sea.  So our departure was delayed until 8:00.  And Funchal looked quite beautiful after dark.

But then departure was delayed until 10:00.  Then about 1:00 in the morning the ship was filled with a loud grinding sound that lasted quite a while, which seems to have been the testing for the work that had been again delayed.  So we didn’t set sail for Agadir until about 2:00 AM, but we still made it to Agadir Morocco on time early Monday morning.  However, that is another story.  I will close this installment with a couple of more towel animals.

Land! At last!  After more than a week with nothing to look at but water, the sight & feel of solid land is more than welcome.  The last few days at sea were quite rough.  We detoured to the south to avoid a big storm paralleling our path about 250 miles to the north.  We didn’t see much rain, but the sea was very rough.  Glassware was jumping off the shelves, plates were migrating across tables, chairs would move across the floor (sometimes with people in them), & wine buckets fell from their pedestals in the restaurant, spilling bottles & ice across the floor.  At night doors would move if not latched & everything had to be secured.  This also made walking difficult; it seemed that walking across a level floor was always an uphill climb as the ship rocked back & forth.  This was a big change from the first few days when we were crossing the relatively calm Sargasso Sea, where the water was deep blue & the ship remained mostly upright. 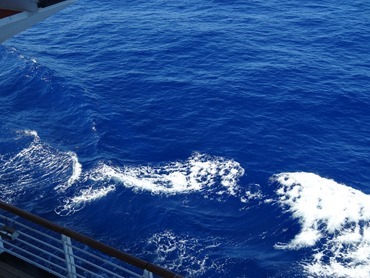 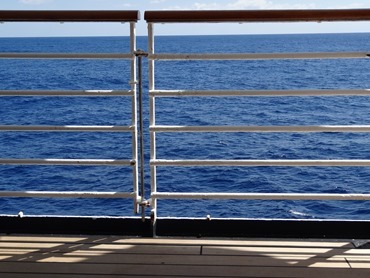 We arrived in Funchal, Madeira at about 3:00 on the afternoon of March 22, which was about 3 hours late.  This meant that most things were closed by the time we got into town.  Madeira is an autonomous region of Portugal, located off the coast of Africa.  It is an archipelago of several islands, the largest of which is (surprise!) Madeira.  About a quarter of a million people live there.  Madeira is most famous for its wine, also called Madeira, which is fortified with brandy or spirits & made with a heat process.  The heat process was discovered when the wine was left in a hold during a tropical voyage, and instead of being spoiled as expected it was improved.  After that discovery Madeira wine would be shipped in the holds of ships on tropical voyages just to cure it by the heat of the voyage, and later someone developed a way to duplicate the process by keeping it heated on land.  They began to add spirits to the wine to preserve it during the years when its delivery to Europe was interrupted while Napoleon blockaded Madeira’s shipping.  Madeira wine was often called “sack” (see Shakespeare’s Henry IV, in which Falstaff calls it that) because pirates routinely sacked the shipments.  Another term is Malmsey (the American founding fathers used Malmsey to toast independence), which is a factory that produces one kind of Madeira wine.  So much for drinking.

Madeira is very mountainous, and Funchal is situated on a harbor that is surrounded by high land.

So, with little time left on the first afternoon we headed right for the cable car that takes you to Monte, a mountain overlooking the city.  Its a 4 mile trip suspended high in the air; you could see the port & the ship, & also look down into people’s yards and patios.  As you can see from the picture above Funchal, and in fact most of the island, is extensively terraced so just about everyone has a view of the water over the top of their neighbors’ houses. 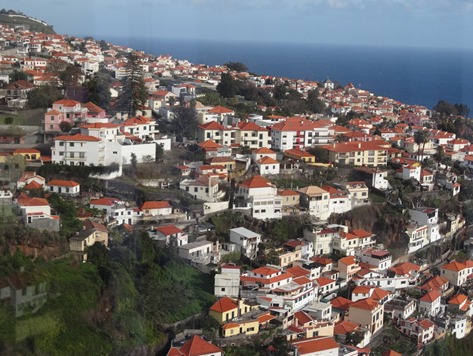 On top of Monte is a community with a church & several formal gardens.  The signature Funchal experience involves climbing into a wicker sleigh-type thing, and then a couple of Madeirans wearing white shirts & a straw boater hat push you down the hill at great speed.  By the time we got to Monte they were in the process of closing up for the day & no one was actually riding in the sleighs. So, we walked around for a little bit & then caught the return cable car before they closed up at 5:30.

We then walked around the town for a while.  It is a nice walking city, & we saw (inter alia) the legislature (no admittance), the cathedral (didn’t enter because they were having mass) & an interesting enclosed produce market.  The buildings were mostly white stucco with red tile roofs & a number of them had tile work as well. 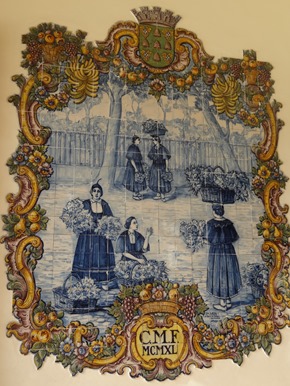 Among the most interesting features here were the mosaic sidewalks, similar to what we saw in Brazil last year, but very different patterns.  This must be a Portuguese thing, I guess.  Here are just a few of the interesting patterns we came across, along with a closeup that shows what the black & white stones look like. 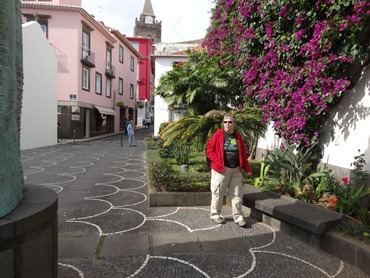 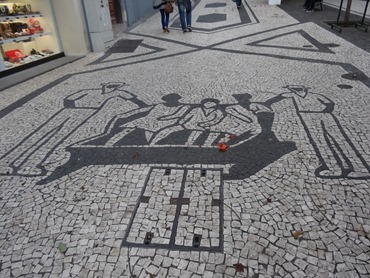 Madeira was discovered in 1419 by a fellow named Zarco (sounds like a space villain).  There is a statue of him and also a sidewalk mosaic tribute. 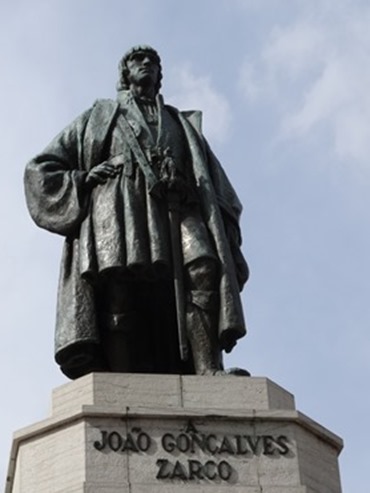 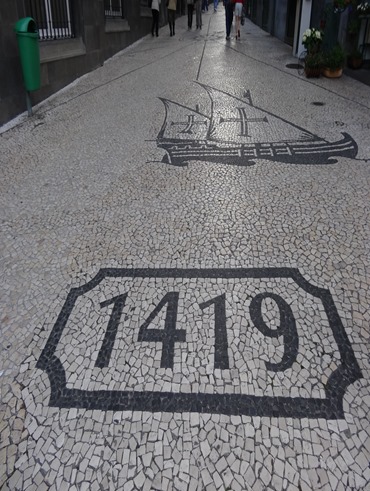 Another discoverer who lived here for a couple of years about 50 years after Zarco was Christopher Columbus.  He came to Madeira, married the governor’s daughter, who died in childbirth a year or so later, after which Columbus left the island.  Apparently nothing else is known about Columbus’s sojourn here, but that doesn’t stop enterprising Madeirans from maintaining a house that tourists can visit & imagine that Columbus lived there.  We did not visit that one.

While walking around town we saw a fellow with a golden eagle, some swans in a park, a sparsely attended political rally near the city hall (there seems to be an election campaign going on; we saw communist party posters several places), and many beautiful flowers. 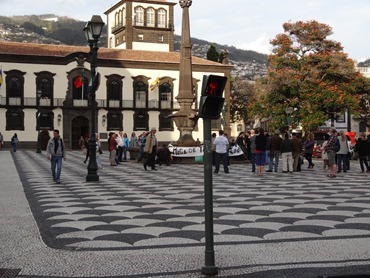 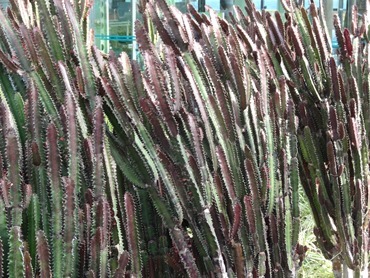 The first night there was a show on the ship by a Grupo Folclore da Ponta do Sol, a Madeiran folkdancing group from a village called Ponta do Sol not far from Funchal.  Very colorful costumes & an interesting performance (although it would have trouble living up to the Samba show we saw in Rio last year). 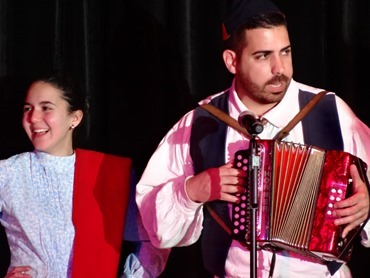 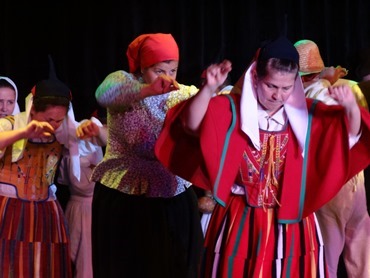 So ended our first (short) day in Madeira, and this post is already pretty long.  So I will save the second (long) day for the next posting.