We arrived in Almeria, Spain early in the morning on March 28, our fourth port day in a row (exhausting!).  Almeria is a very old city; the irrigation system in this area was laid out by the Romans, and improved but not really changed from that time.  It used to be a thriving port and, like all of this part of Spain, was under Moorish control from the 8th to the 15th Centuries.  During the Spanish Civil War Almeria was a trade union & Republican stronghold (while Granada, which we visited today, supported the Fascists).  Almeria has an impressive old Moorish fortress overlooking the harbor called the Alcazaba.  One story about the city’s name is that it was named after this fortress and means “Watchtower.”  The other story we heard is that it means “Mirror of the sea.”  I think I like the second one better.

We took a bus excursion to Granada to visit the Alhambra, the best example of Moorish architecture still in existence.  Built in 1013, the Alhambra is having its 1000th birthday this year (decacentenial? millenial? something else?), although most of it was only completed over the next few centuries.  It was the last holdout of the Moors in Spain during the reconquista (the Christian reconquest).  Its young king, Boabdil, surrendered the fortress to Ferdinand & Isabella on January 2, 1492 after a long siege (it was pretty much impregnable to attack) pursuant to a treaty in which they promised to respect the rights & religion of the inhabitants.  But the Jews who failed to convert to Christianity were booted out before the end of the year & the Moslems were expelled within 8 years.  So much for treaties.  After leaving the Alhambra, Boabdil reputedly turned for one last look & shed a tear (“the last sigh of the Moor”).  His lovely mother, seeing this, gently consoled him: “Do not weep like a woman for what you could not defend like a man.” Life must have been hard with a mother like that.

Anyway, it was a long bus ride to Granada but the various territories we traversed were quite interesting.  We drove through some sparsely vegetated hills with ridges & dry riverbeds (called Ramblas in Spain, like the Wadies in North Africa).  This country may look familiar to you.

If that looks like the Old West to you, it is because you have seen it playing the old west in many movies.  Almeria is a film mecca, and hundreds of films have been made here, most notably the Sergio Leone / Clint Eastwood spaghetti westerns (also Indiana Jones & the Last Crusade, Conan the Barbarian, & many more).  Not far from Almeria we saw some of the buildings erected for sets in the Leone / Eastwood films. 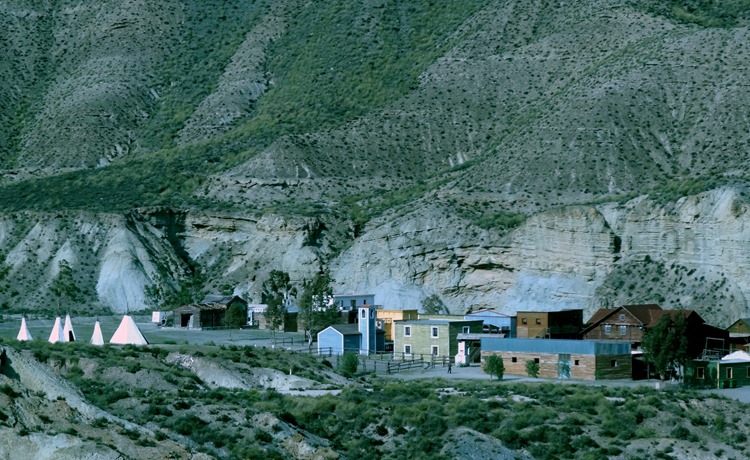 We also saw a whole lot of power generating windmills.  Spain is a leader in this industry because it has to import 100% of its oil.  We saw several interesting villages, a castle built by Christians during the Reconquista in the 15th century, and buildings that are built into the side of mountain cliffs.  This idea apparently started with the Gypsies that live in this area, but now it is very chic (& it saves on air conditioning, although I imagine most of the rooms don’t have a view). 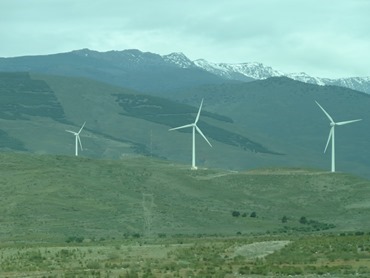 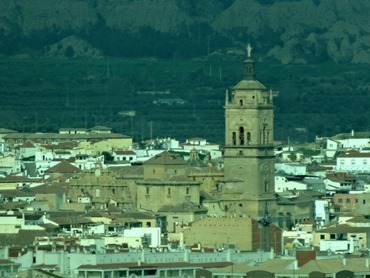 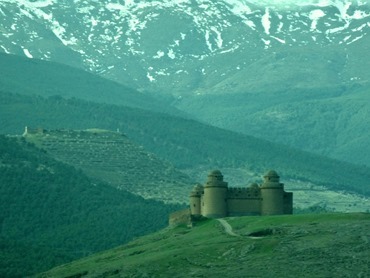 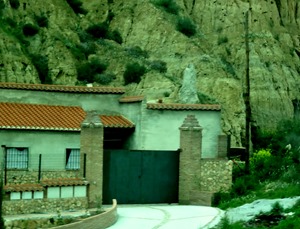 We also drove past the Sierra Nevada mountain range, whose snowcap provides much of the water for this region.  Some of the mountains in this range are higher than the Pyranees.

So finally we reached the Alhambra.  The Alhambra is not just a palace, but a citadel on a mountain overlooking Granada.  It has massive defensive walls, and housed military barracks and a small town full of civilians along with an elaborate palace complex for the sultan & his family.  We entered through the Gate of Justice which, if I remember correctly, was so named because it was the place of execution for offenders. 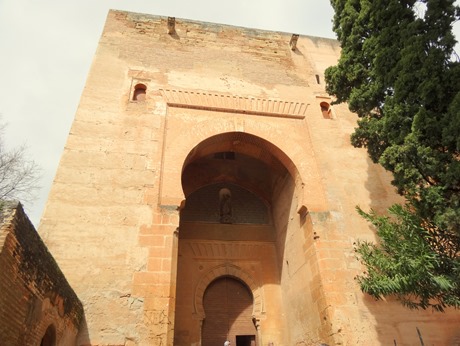 So now, another book.  In the mid-19th Century, American writer Washington Irving (of Rip Van Winkle & Ichabod Crane fame) lived in the Alhambra for several months.  As you might expect, he wrote a book about the Alhambra’s history and his experiences there called “Tales of the Alhambra.”  It was a huge success and led directly to a movement to save and renovate the Alhambra, which had fallen into abject disrepair particularly after Napoleon’s troops had demolished some of it & turned it into an army barracks & stable (they tried to blow up the whole palace, but fortunately one soldier removed all the fuses & saved the palace).  The work of renovation, which picked up steam at the beginning of the 20th Century, continues today.  I read Irving’s book a few weeks ago, and found it pretty interesting.  The first part is mostly history & a vivid portrayal of the people who lived there in his time (many people lived there; whole families were born & lived out their lives in the Alhambra at that time).  The last part contains some stories & myths about often supernatural goings-on, including tales of buried Moorish gold, an enchanted Moorish army underground waiting for the time to retake the area, etc., which I found less compelling (but you might like better).  Its certainly a classic & a book that had a large impact in its time.  There is even a plaque on the wall outside the Justice Gate commemorating Washington Irving.

The first thing we came to inside the Alhambra was the rather ugly palace built there by Holy Roman Emperor Charles V, the grandson of Ferdinand & Isabella.  He demolished part of the Moorish structure to build this Renaissance palace, which would look more at home in Vienna than Granada.  His plan was to make this his capital, but he abandoned it early on & never even visited it after its completion.  But we did, as you can see below. 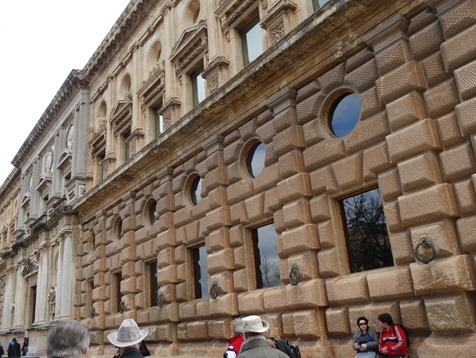 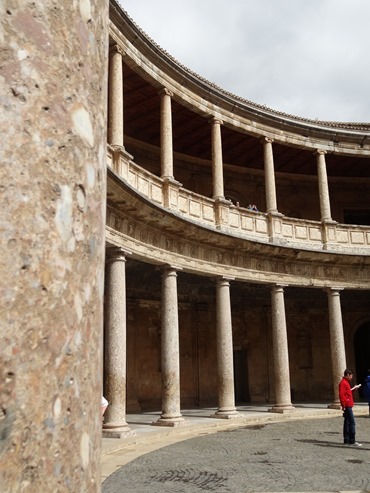 We visited the famous Patio de los Leones (Court of the Lions), named for a fountain in the middle surrounded by sculptures of lions.  This is a violation of Islamic law, which forbids artistic representations of people or animals.  A poem inscribed on the fountain says that they would look much fiercer if they were not so restrained by respect for the sultan. 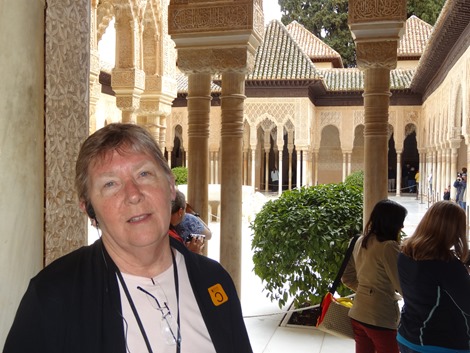 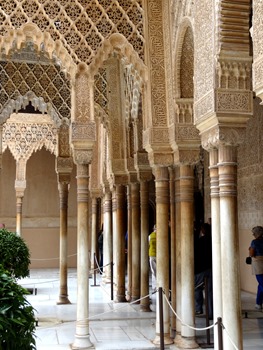 Off this court is the Sala de los Abencerrajes, where 16 members of the prominent Abencerraj family were murdered by the sultan (read about it in Tales of the Alhambra).  It has a particularly beautiful ceiling dome.

On the other side of the court is the Sala de las Dos Hermanas (Hall of the Two Sisters), the principal room of the Sultan’s favorite (full disclosure: I have lots of pictures & am having some difficulty remembering which picture goes with which room, so dividing these out is really just my best guess).  It has another ornate domed ceiling. 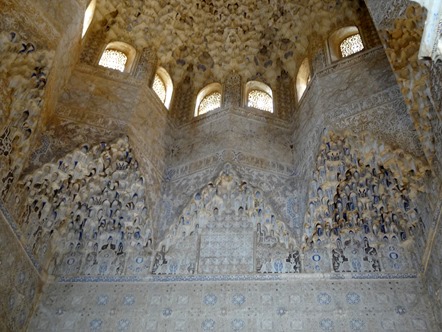 We visited another courtyard with a pool in the center.  Water was an important part of the Alhambra, and really to all Moorish architecture, since it was highly valued by these people whose history was largely in desert areas.  There are no pumps to supply the pools & fountains in the Alhambra.  The water was diverted from a river about 8 kilometers away, which in turn is fed by the snow atop the Sierra Nevada.  They used an elaborate system of aqueducts, above & below ground, to route the flowing water to the Alhambra’s fountains. 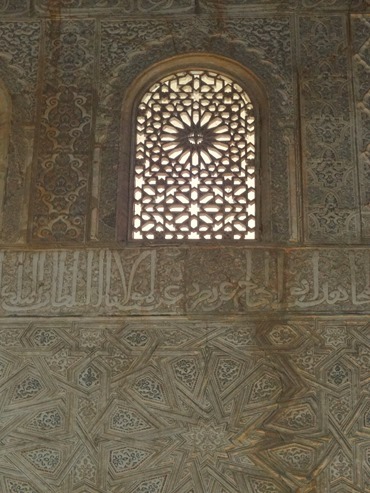 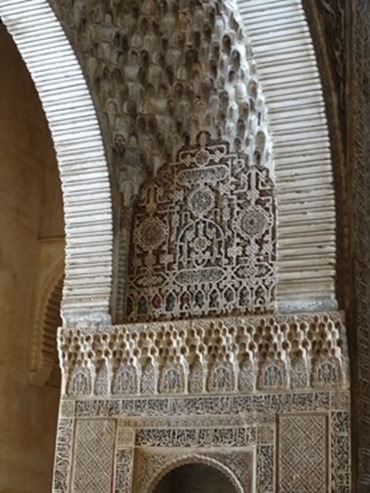 There was quite a lot of elaborate tile work on the walls of many of these rooms, sometimes topped with a border of stucco carvings to stunning effect.  Often the carvings contain sayings or names written in Arabic (We think the one above says “There is no Conqueror but God”).

There is a large open area between the Alhambra palace & the military fortifications, from which there is a great view of Granada below the hill on which the fortress sits.  The Alhambra was once a working town with many houses & shops, and even after its demise there were a lot of people living there (several portrayed by Washington Irving), so there are a number of other structures in that area that are of interest. 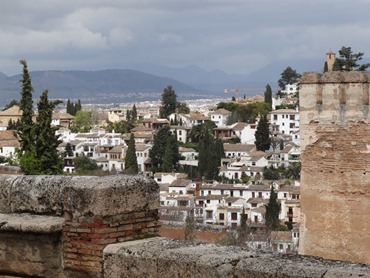 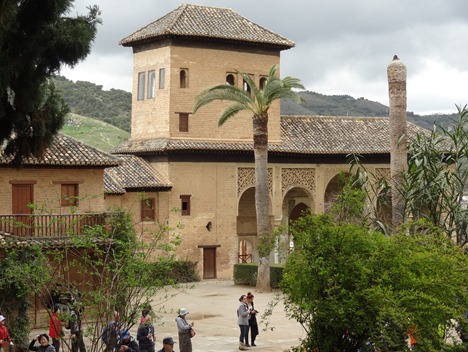 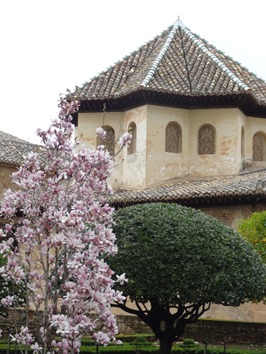 Next we walked up to the Generalife, which was the summer palace that included elaborate gardens.  Its an easy walk today because they have built a bridge to it, but when the sultans lived here you had to ride a horse down the mountain and up another hill to get to it.  Unfortunately, it was too early for the gardens to be in full bloom, but they were very interesting nonetheless.  They are divided into courtyards surrounded by cedars pruned into the shape of castle-like walls, some of which contain fountains.  The sidewalks were mosaic; our guide pointed out that the mosaic tradition was picked up by the Moors from the Romans, although the Iberian mosaics look very different from the Roman ones.  There is also a fabulous view of Granada beyond the Alhambra walls from the Generalife. 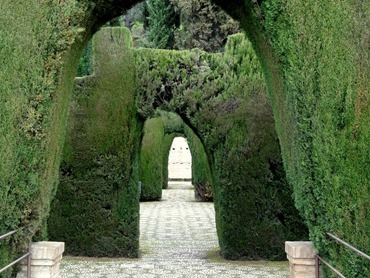 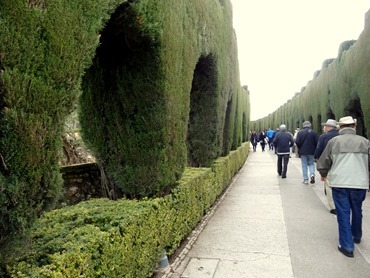 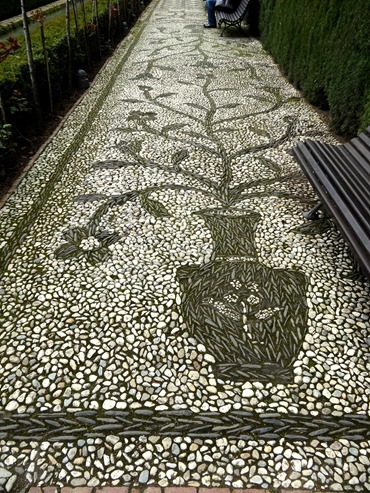 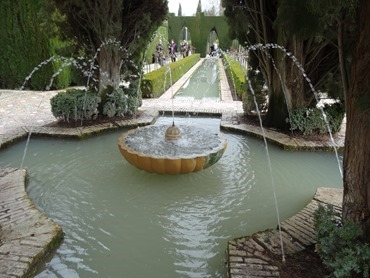 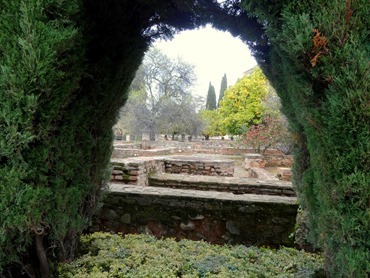 Inside the Generalife was yet another beautiful courtyard, this one with fountains bordering a pool the full length of the courtyard that is planted with flowers.  Remember that the water here is natural flow & not pumped. 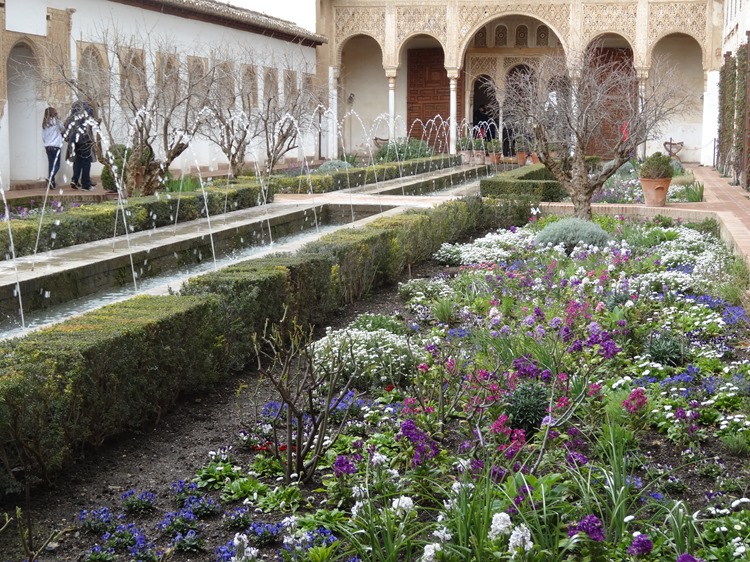 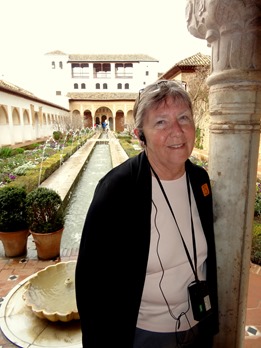 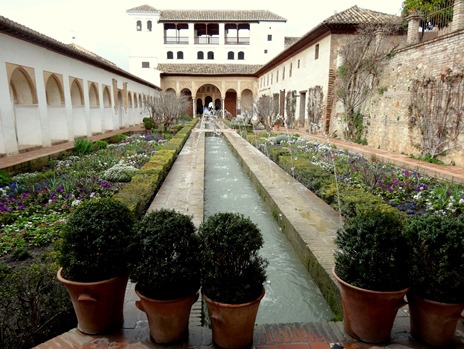 Well, that is really just a glimpse at the Alhambra.  There is so much of beauty everywhere you look, and there is insufficient time on a tour to really take in all the details or to contemplate the harmonious whole.  But some 3 million people visit it every year now, so crowds are inevitable even though tickets are restricted (you can’t expect to walk up and buy a ticket on the day of your visit).  It would be nice to be able to stay in Granada a couple of days for a more leisurely visit, but of course on a cruise that is impossible.  After leaving the Alhambra we ate lunch at a hotel nearby, with musical accompaniment consisting of well-worn Spanish flavored standards.  Also touring the Alhambra were some of our friends, John & Mary Ann Darcy & Ed and Mary Ritter.  So hello to the Darcy grandchildren from their grandparents! And because I have one more picture space to fill, here is the towel animal we received that night before departing for Malta.

This entry was posted on April 5, 2013 by Rick. It was filed under Mediterranean cruise .