Iraklion (also spelled Heraklion) was named for the Greek hero Hercules.  We arrived on the morning of April 3 after a particularly rough day at sea.  We had thought that once we left the Atlantic & entered the Mediterranean the seas would be much calmer.  But no!  This was the roughest day we have had this side of Antarctica.  I tried taking some pictures of the ocean, but because they are taken from such a high angle it really doesn’t convey the turbulence. So instead here are a couple of pictures of the aft swimming pool (you have seen this pool in earlier displays of ship turbulence) with the water shooting up as the ship rolls to one side.  The pool was almost empty by the time I took these photos; it was even more dramatic earlier when it had more water.

It was a gray & rainy day as we set out from the ship.  The two places we wanted most to see here were (1) Knossos, the archeological site of the ancient palace of the legendary King Minos and the habitation of the Minotaur, a mythical half-man half-bull that lived in the labyrinth in the palace’s lower level, & (2) the archeological museum that contains most of what was uncovered at Knossos.  We didn’t need an excursion for this (yay!) since Iraklion is relatively small & Knossos is easy to reach by municipal bus.

Knossos was the seat of the Minoan civilization, one of the oldest in Europe.  This site was inhabited since Neolithic times (7,000 – 3,000 BC).  The first palace here was erected around 1900 BC, and after it was destroyed (probably by an earthquake, the most common cause of destruction in these parts) a larger palace was built on the site, which was destroyed around 1450 BC, which is when the Mycenaean Greeks took over.

Almost as interesting as the palace itself is the controversial story of its modern recovery.  The site was discovered in the 1870’s by a local man, but in the 1890’s it was purchased by an English archeologist (who had worked with Schliemann at Troy) named Sir Arthur Evans.  He led digs here from 1898 until the 1930’s.  Archeology was in its infancy then, & unlike modern archeologists who carefully sift and preserve as much as possible, Evans decided to rebuild the palace as much as possible.  This has been done to decent effect elsewhere in more recent times, reassembling the fallen pieces of buildings at ruins according to a broader understanding of what had been there before (we will see some of this, for example, at Ephesus).  But Evens built the site according to his own imaginative “interpretation” of the site, and he used liberal amounts of cement, paint & newer stones & mortar to make it look like what he imagined.  The result is that today it is difficult for the visitor to distinguish what was original from what Evans added.  I know for sure that the painted parts are all added, because the original frescoes were removed to museums. There is an extensive ongoing archeological project to recover what was original and liberate it from Evans’ constructions, but it has a long way to go.  So with that caveat in mind, here are some pictures. 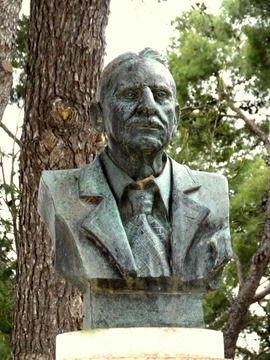 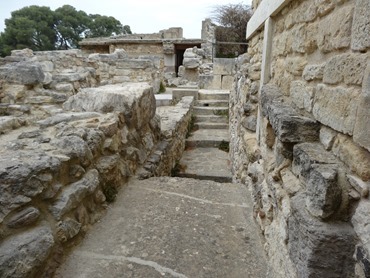 You can see the red and black pillar above, probably erected by Evans (I think) and certainly painted by him.  We are used to seeing Greek antiquities in natural white marble, which looks so elegant & “classical,” but in fact the Greeks usually painted their statuary & buildings in bright, sometimes garish, colors.  Evans apparently took the colors of the pillars from a fresco (which you will see in the museum section below) thought to depict this palace and including red pillars like this.  Here are some storage rooms in the palace (I don’t know if the pottery is real or new).

Visitors can no longer enter the most famous room here, which Evans called the “throne room” because it has a stone chair on one wall.  It is now thought to have been a reception room rather than a throne room in the modern sense.  The wall paintings are Evans’s, but still quite attractive. 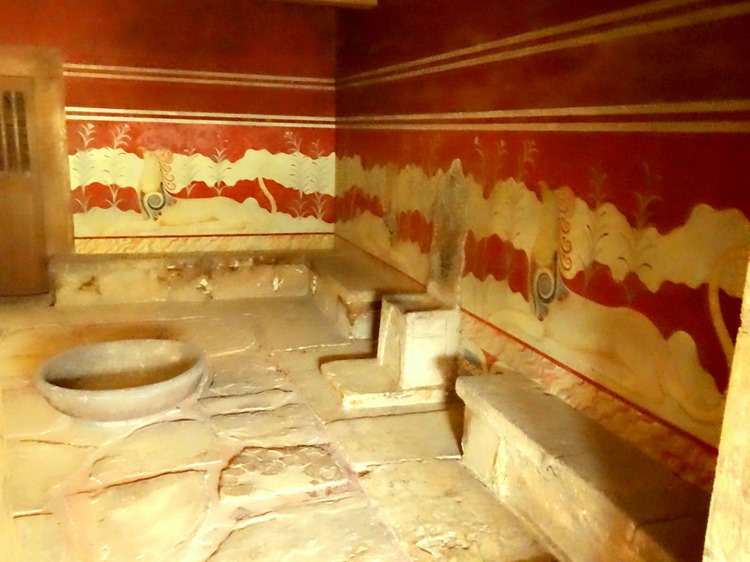 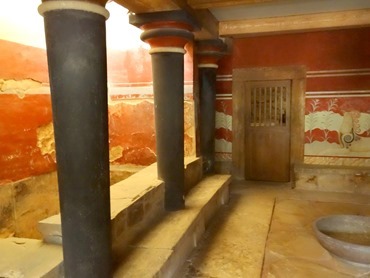 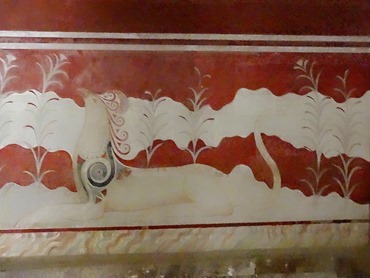 And here are some visitors.  The red bull’s head on the building in the background is a reproduction, but you will see the original below since it is in the museum. 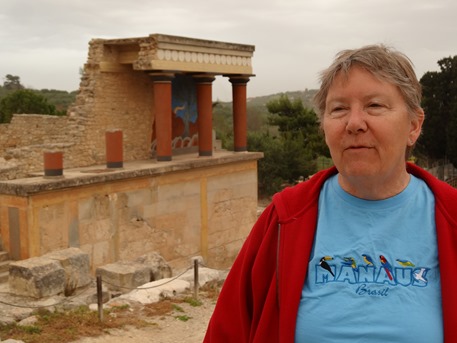 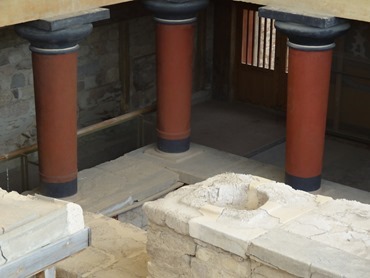 We saw some archeologists at work.  We were told that the current project is to repoint the original masonry with materials that would have been used at the time (Evans used modern materials, which they are now removing, along with his modern cement which turns out to be harmful to the old stone).

The palace had an elaborate water system for its time, some of which remains.

And here are some lower level rooms, which I suppose may have been the origin of the myth of the Labyrinth.  You can see pillars that once held up a higher floor (I suspect these were “restored” by Evans since the outside finish looks like cement) & an interesting pattern of mortar with small stones in a wall. 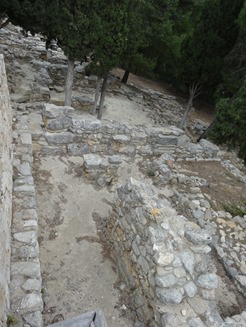 Finally, here is what we were told is the oldest road in Europe. 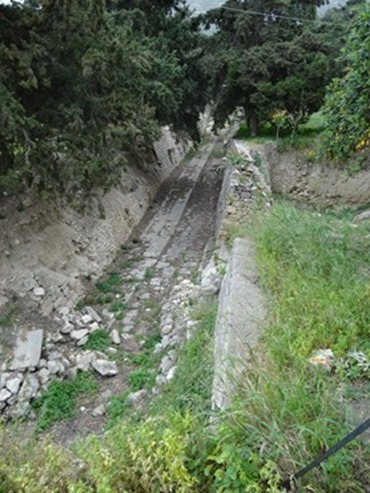 And while we were there we saw many beautiful flowers, and a very loud & raucous peacock sitting in a tree.  I had never seen that before; I didn’t even know they could fly! 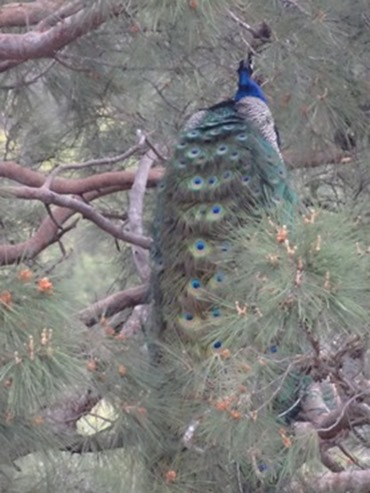 Then we took the bus back to town & got off at the Museum of Archeology.  This museum has been undergoing renovation for a number of years, so much of its collection is unavailable.  They have been showing some of their prize possessions in a small temporary exhibit space in the basement during the renovations, but luckily for us they recently reopened two of their remodeled galleries: statuary & frescoes. We visited the temporary exhibit & both galleries.

The temporary exhibit contained a lot of figurines & pottery from Knossos, some of which I had seen pictures of before.  I will just show some of it to you & put what little I know about it in the captions.  I really liked this stuff; it is surprising how sophisticated (and playful) some of the artwork created this early was. 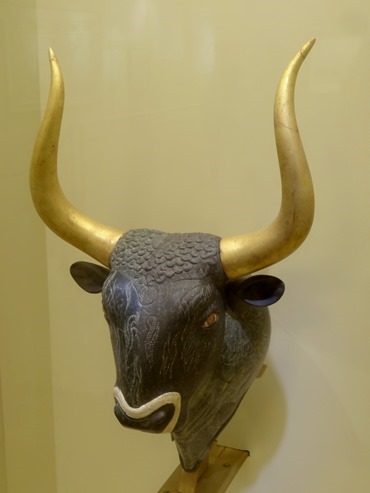 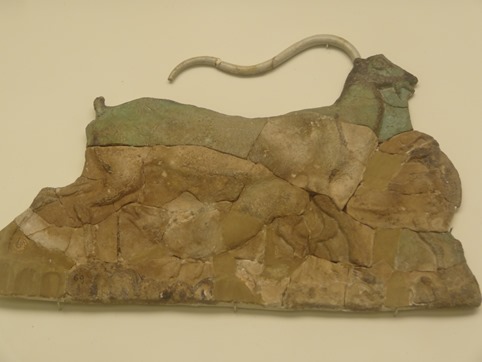 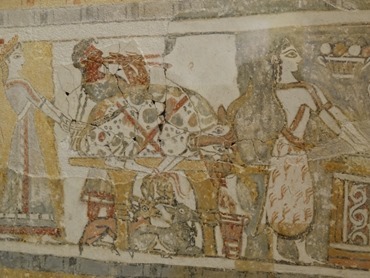 Of particular interest for the board game fans is one of the world’s oldest board games, dating from about 1,500 BC.  It is called the “chess board,” although it obviously isn’t that.  If anyone knows how this game was played, it sure wasn’t explained on the exhibit. 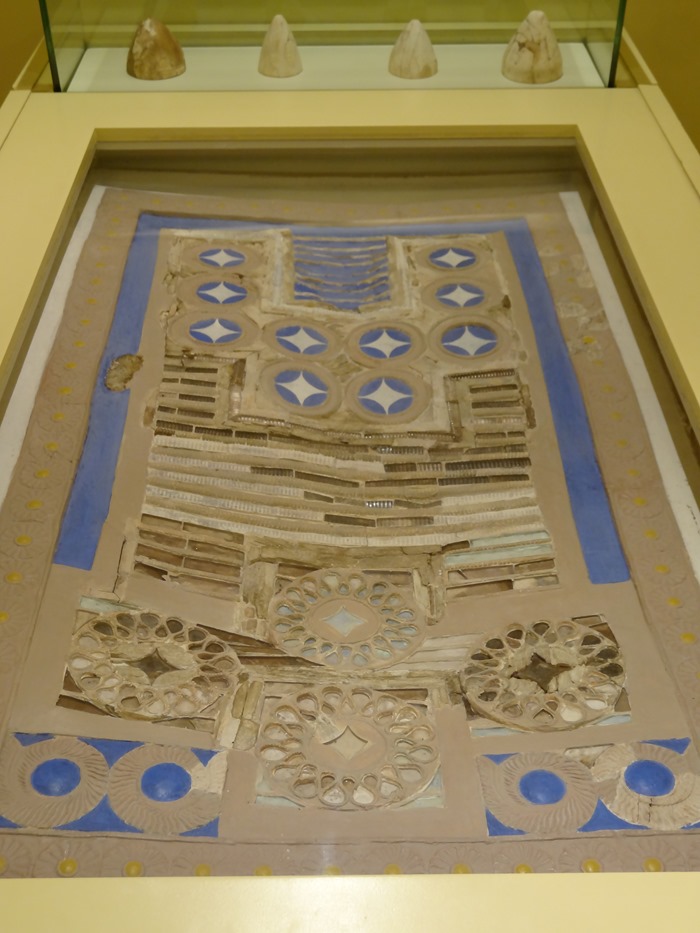 We didn’t find much of great interest in the statuary room, which mostly contained later Hellenistic & Roman-era works (although there was one statue purportedly made by Praxidiles[sp?], one of the great Athenian sculptors, but I doubt this was one of his best).  But the fresco room was fascinating.  Here we saw the originals of some of the reproductions we saw at Knossos.  We also learned that these colorful frescoes, pictures of which I have seen in books, are actually modern elaborations upon the fragments of the originals that were found at the site.  Some of these elaborations were informed by items found elsewhere, but sometimes it looks like parts of the elaborations are completely independent of anything in the fragments.  (It said that one fresco fragment was originally interpreted as the body of a boy, until they found another fragment nearby with the muzzle of a monkey, and then it was re-interpreted as the body of a monkey).  You can see the original fragments in the pictures, which look like raised sections, while the elaborations are the flat painted parts. 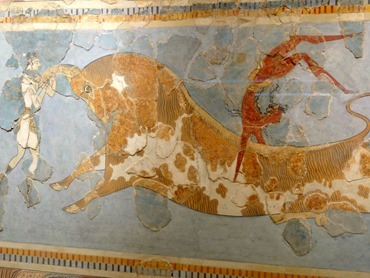 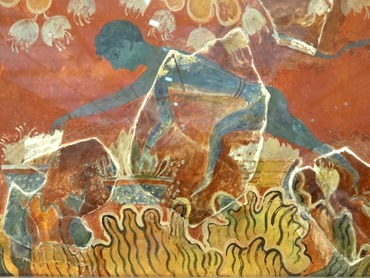 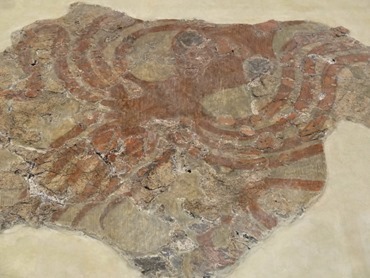 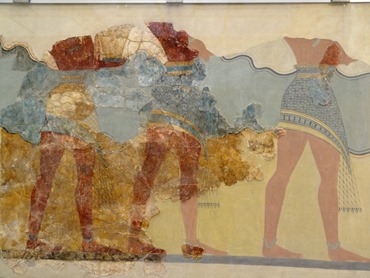 When we left the museum it was raining cats & dogs.  We had brought our umbrellas, which helped keep us a little drier, but they didn’t work their usual magic (if you carry an umbrella it won’t rain).  So we gave up on our plan to explore the city a little & instead headed back to the ship.  It wasn’t a very long walk to the port, where there was a sign touting their expertise in servicing cruise ships.  Just before we entered it the sun came out & it was beautiful for the rest of the afternoon. But we were too soggy & tired by that time to turn around & go back out, so that was the end of our visit to Iraklion.  From the Lido deck on the ship (where we went for refreshments) we noticed an impressive mountain standing alone on the other side of the city (I would tell you its name, but I don’t know what it is). 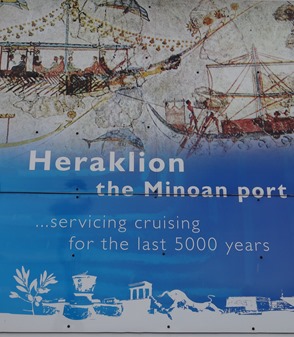 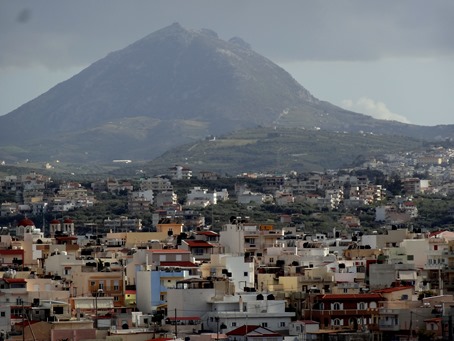 OK, I owe you some towel animals & fruit art that I promised at the end of the long Malta post.  And there were more here, so enjoy. 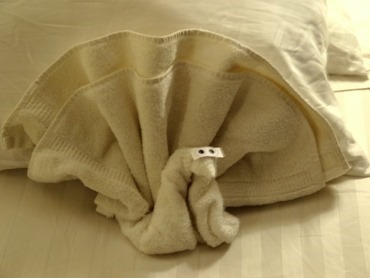 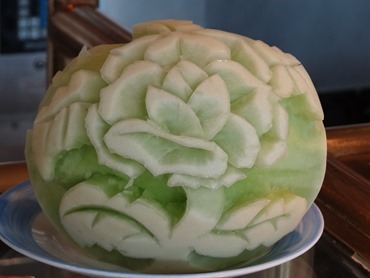 So we sailed away from Crete to make our way to Cyprus.

This entry was posted on April 14, 2013 by Rick. It was filed under Mediterranean cruise .