We arrived in Alexandria early on the morning of April 7.  Alexandria was founded by (surprise!) Alexander the Great.  It is thought that he was buried here, but archeologists have so far not been able to discover his tomb. Sounds like a job for Indiana Jones! As you may know, Alexander assigned provinces of his empire to his leading generals, & Egypt was assigned to a general named Ptolomy. The Ptolomy dynasty ruled Egypt from Alexander’s death in the last third of the 4th Century BC until it was incorporated into the Roman Empire by Augustus Caesar after he defeated Antony & Cleopatra at the battle of Action.  Alexandria  was one of the premiere cities of the Hellenistic world, unusually rich & cosmopolitan in its population.  It had important Jewish & early Christian communities & its library was renowned as the greatest center of learning in the ancient world.

We considered it something of a triumph that we even got here, since we have been somewhat worried that all the political trouble in Egypt & Israel lately would convince Holland America to skip some or all of these ports.  We actually heard a rumor after we finished all four of these ports (yes! we got to all of them) that Holland America had anticipated that we would need to cancel these stops & had made contingency plans to spend a few days in the Black Sea instead (I have no idea whether this is true; there are a lot of rumors on cruise ships).  Anyway, we were very glad to get here. This was the first of four long and exhausting tour days in a row.  Many passengers went to Cairo on this stop to see the Pyramids, etc., but we really wanted to see Alexandria.  So, since this is a notoriously difficult city to get around on your own, we signed up for a 12 hour tour (the only one offered that visited all the places we wanted to see).

Alexandria is a city of contrasts.  It has some beautiful older buildings & homes, but it also has many slums.  Although it has a reputation as a sophisticated & cosmopolitan city, many of the streets are littered with trash (sometimes in huge piles).  We were told that since the overthrow of the Mubarak regime two years ago the garbage men have not been paid regularly & that is why Alexandria (& Cairo & Port Said as well) is not clean.  Our Alexandria guide, a young woman who has little sympathy for the Muslim Brotherhood or the Morsi government, told us that her monthly utility charge suddenly went up substantially and when she inquired about it she was told it was for trash collection, even though she still has to dispose of her own trash. As you can see, many people hang their laundry on the apartment balcony to dry; we saw this all over Alexandria & Cairo. 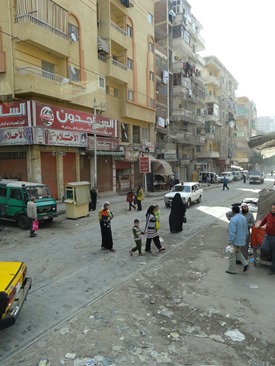 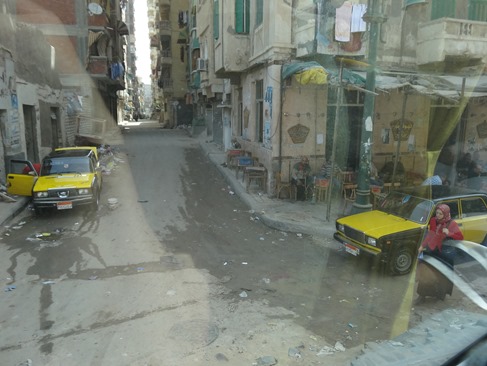 We also saw lots of men sitting around in cafe’s talking, drinking & smoking from large hookahs. It was Sunday, but we understand it is a common sight on any day, and we saw this in Cairo on Monday as well. If so, I don’t know how it fits in with working; maybe their wives do the working or maybe work days commonly include time for this.  The hookahs are provided by the cafes (for a price) & we were told they burn a combination of tobacco, straw & molasses.  This is common in Turkey as well as Egypt.

The first place we visited in Alexandria was the Catacombs.  We walked down a lengthy circular staircase(original) in the ground to reach a level full of crypts (mostly holes in the wall; the bodies have long since disintegrated from moisture).  There were some impressive reliefs & paintings from a couple of thousand years ago & a dining hall where friends & families bid farewell to their loved ones with a celebration of their virtues.  I would show you pictures, but they don’t allow cameras inside.  If you google “Alexandria catacombs” though, you should be able to find some.

Anyway, these catacombs had long been forgotten & were unknown when in 1900 a donkey fell through the ground into an underground chamber.  They have been excavating ever since, but it is believed that most of the catacombs have yet to be uncovered. 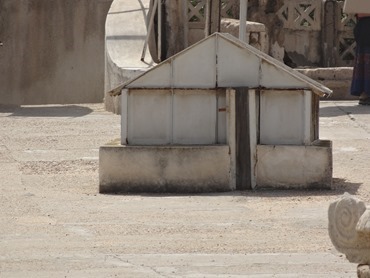 I was able to get some pictures of interesting old stone works that lie around the catacomb grounds, but we were told that these were all brought here from other sites, not out of the catacombs. 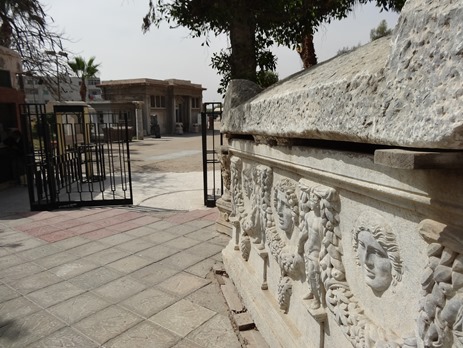 Next we went to the site of Pompey’s Pillar.  In fact this pillar had nothing to do with Pompey; it was built by the Emperor Diocletian and originally had a statue of him on top.  I have read that the Crusaders mistakenly called it Pompey’s Pillar, and our guide said it was someone else (can’t remember who).  The Roman general Pompey’s primary association with Alexandria is that he was murdered here by Cleopatra’s brother. There are sphinxes (man’s head on lion’s body) on either side of the pillar. 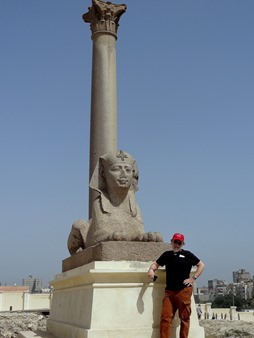 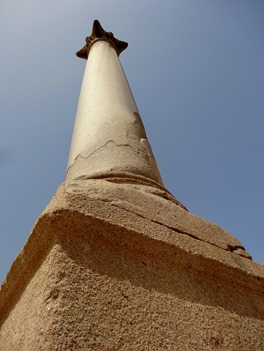 This pillar is unusual in that it is made of a single piece of stone, whereas most pillars are made of disk-like pieces stacked on top of each other.  We were told that the pillar was made at the quarry near Luxor (I think) & then floated down the Nile.  At that time there was a canal from the river to this hill, which was essentially the center of town.  Also associated with that canal was the “Nile-ometer,” which measured the depth of the river by the waterline on a stairstep construction that has been excavated near the pillar.  A lot of excavation was being done around this site & there were a number of large artifacts on display.

We next visited the Roman Theater of Alexandria.  There was a lot to see here, and it is a very active ongoing excavation site.  It seems that most of ancient Alexandria is under modern Alexandria, and so it isn’t available to archeologists. So the sites that are available are very active.  This is another site near the center of ancient Alexandria. There was quite a lot to see beyond the theater, which is in remarkably good shape.  On the hill above the theater a lot of artifacts were displayed, including a stone from the ancient Pharos Lighthouse (one of the 7 wonders of the ancient world) & some artifacts recovered from under the harbor, where a good part of ancient Alexandria lies. There is a plan eventually to either create a glass underwater museum for these extensive ruins, which include a good bit of the lighthouse, or to use glass-bottom boats for visitors to see them.  Even today you can scuba dive among these ruins, if you are into that sort of thing. 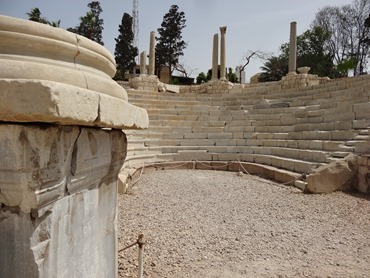 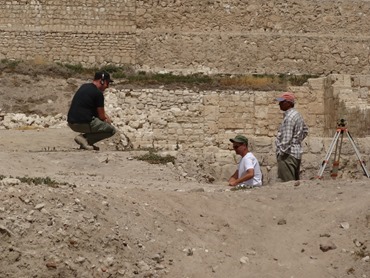 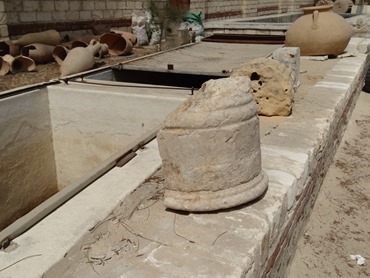 The theater had interestingly carved pillars (or at least the remains of pillars) & sidewalk mosaics (the great granddaddies of those we have seen in Brazil, Madeira & Spain). 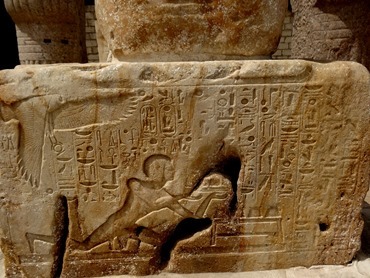 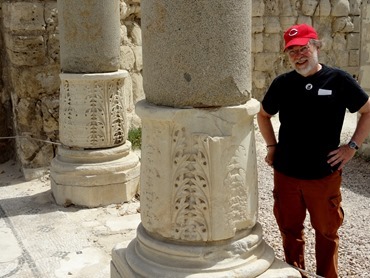 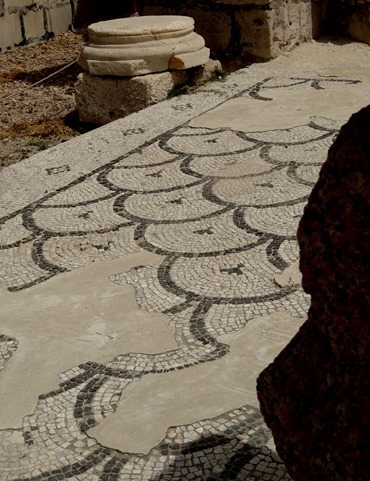 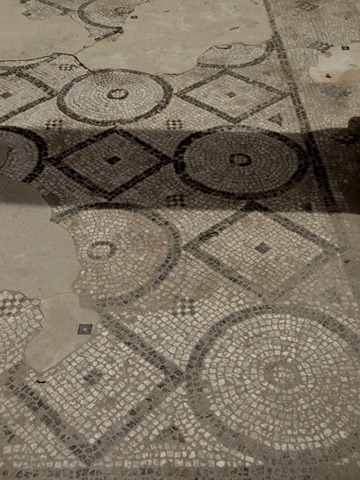 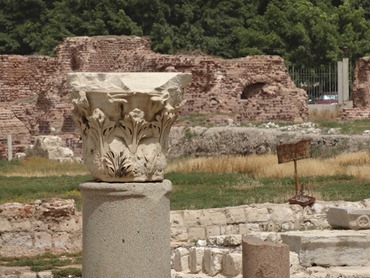 We next visited the Alexandria National Museum, which had a relatively small but very interesting collection of Egyptian antiquities.  We saw a mummy in its case (built like a Russian doll, with one coffin inside a second inside a third) & a large head of Akhenaton (the pharaoh who adopted monotheism & was largely wiped from the records after he died and the old religion returned).  There were some large sculptures of family groups (with the woman’s hand around the man’s shoulder to show that she was his support) & a lot of other interesting stuff.  Unfortunately, this was another place where cameras were not allowed, so I can’t show you any of this.  However, cameras could be used outside & the museum building itself is an interesting old villa for a wealthy family; this is the house in which Omar Sharif grew up.  There were some unidentified artifacts on the grounds outside as well. 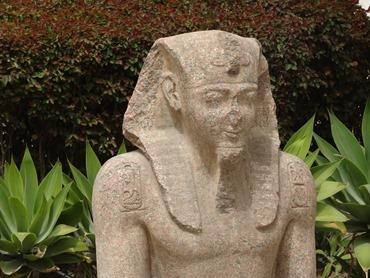 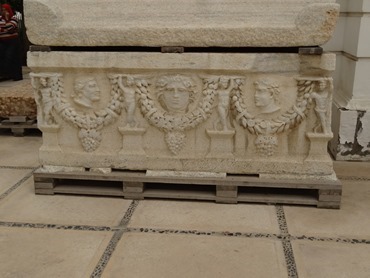 We had lunch at a very good restaurant on the Corniche, which is the curved promenade that runs for miles along the Alexandria waterfront.  It is a fashionable area with many apartment buildings & hotels & is lined with palm trees.  The restaurant served 8 kinds of hummus & other dipping sauces (one very garlicky . . . yum), then a huge plate of several different kinds of kebobs plus a barbecued chicken breast and potatoes, then an array of sweet baklava-type desserts. This was one of the best meals we have had on a shore excursion. 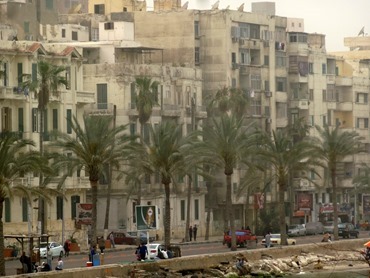 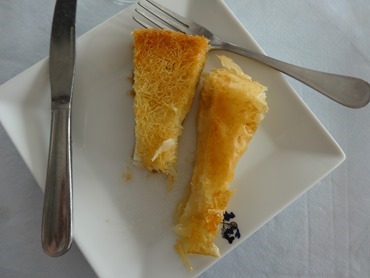 After lunch we paid a quick visit to Fort Quaitbey.  It is built on the spot where the Lighthouse once stood, on the island of Pharos just off the Alexandria waterfront.  It is connected to the mainland by a causeway built in Alexander’s time.  The fort was built by the Turks in 1479, and it reputedly is constructed partly of stones from the old Lighthouse.  This is also a good place to show you a few of the ubiquitous vendors who accost you everywhere in Egypt, trying to sell you junk for really low prices (10 postcards for 1 Euro!).  Its probably a good deal if you like this stuff, mostly cheap trinkets & jewelry, but also watches and scarves, etc.  They can be pretty aggressive & persistent, which is really irritating if you only have a few minutes to visit the site you came to see. 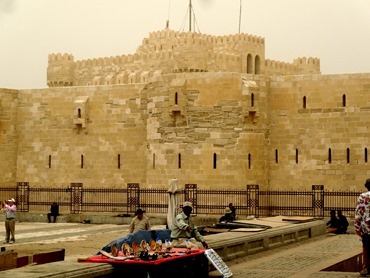 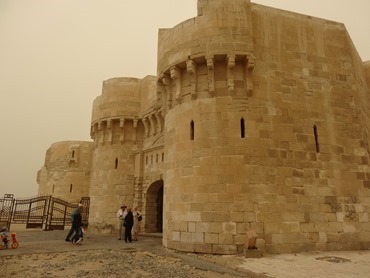 OK, now for all the library fans, this is the Big Kahuna.  Alexandria was famed throughout the ancient world for its great library containing, of course, scrolls rather than books.  There was a law that any ship docking at Alexandria had to make available for copying any scrolls onboard (sounds like the Library of Congress’s system entitling it to a copy of any book copyrighted in the United States).  As a result, it accumulated a repository of much of the scholarly literature from throughout the mediterranean world and made Alexandria a center of intellectual activity.  In 48 BC it was partially burned during Julius Ceasar’s invasion and later Mark Antony gave Cleopatra the library of the city of Pergamum to compensate.  Some 300 years later the library was completely destroyed by Christian mobs who disapproved of all the “pagan” literature it contained. Only one scroll survived.  It is now in Vienna & the Alexandria Library only has a copy of it (but you had to pay extra to see it – for a copy! – so we didn’t).

Anyway, in 2002 Alexandria opened a new great library (sponsored by UNESCO & financed with contributions from many countries) near the spot where the ancient one stood (the actual spot is now probably under water).  Called colloquially “BibAlex” (short for Biblioteca Alexandrina), it contains some 8 million volumes, and has the largest indoor reading space in the world.  The library is nothing short of spectacular. 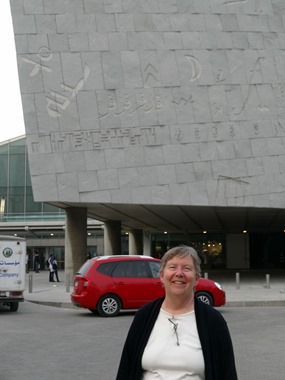 The reading room is lit by all the skylights in the tilted oval roof, & there are green & blue lights in the ceiling because these colors are supposed to be conducive for study. Books in all languages are filed together on the shelves (ie. different language copies of a book are shelved together). The library is digitizing its collections, particularly its Egyptian works, & it has a number of museums & display areas for temporary installations.  The Alexandria University is next to the library, & students can join for a few dollars a year (its not a free public library; we had to pay to go in). There are also a planetarium & a conference building at the library. 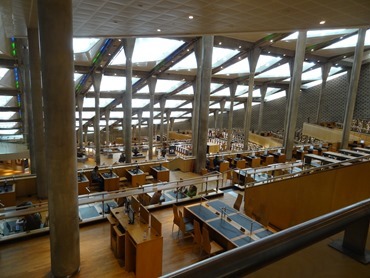 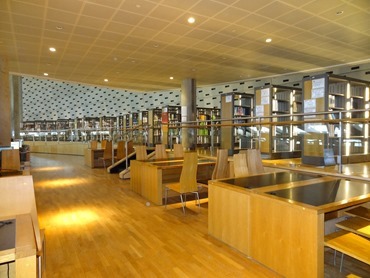 Well, it was a long & exhausting day in Alexandria, but well worth it.  It is a fascinating city & would be worth a longer visit. I will leave you with some miscellaneous pictures that are interesting enough to include but don’t fit in anywhere else. 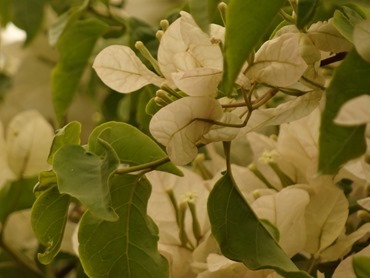 This entry was posted on April 20, 2013 by Rick. It was filed under Mediterranean cruise .