Saturday, August 2, found us anchored at Lerwick, capital of the Shetland Islands. Sparsely settled, Shetland has a population of a little over 20,000 & half of them live in or near Lerwick. No place in Shetland is more than 3 miles from the ocean. It has no native animals & no native trees; all that are there were introduced by men. Much of it looks very bleak: devoid of trees with houses scattered in tiny villages, just grassland, rocks & sea. But it has its own stark beauty. 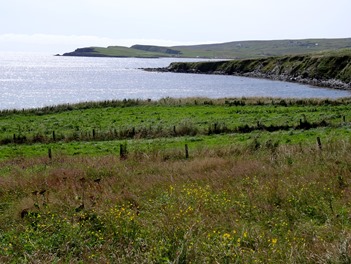 While the Shetlands have been inhabited for about 6,000 years, the Vikings settled it in the 8th Century and it remained at least nominally a Norwegian possession until the 15th Century. It seems that in the late 1460’s Princess Margaret was betrothed to King James III of Scotland. Her father, the king of Norway, was too broke to pay a dowry so he gave James the Shetland & Orkney Islands as security for later payment. Princess Margaret died en route to Scotland but the Scots insisted that the dowry was due nonetheless. The dowry was never paid and thus Scotland’s possession of the islands became permanent.

Even after it became part of Scotland the Shetland economy continued to be based mostly on selling fish to the Norwegians & the Hanseatic League in Bergen, Norway.  The culture of the Shetlands today owes as much to its Norwegian origin as to its Scottish connections.  Lerwick is closer to Bergen than it is to Edinburgh, and the people are very proud of their Viking heritage. The very names of Lerwick & Shetland are of Norse derivation.

We spent the first part of the day on a bus excursion that took us to the southernmost point on the Mainland island of Shetland. This was nice because it gave us a chance to get out of town & see the countryside. A lot of villages, isolated farms, some ruins & even a beach. 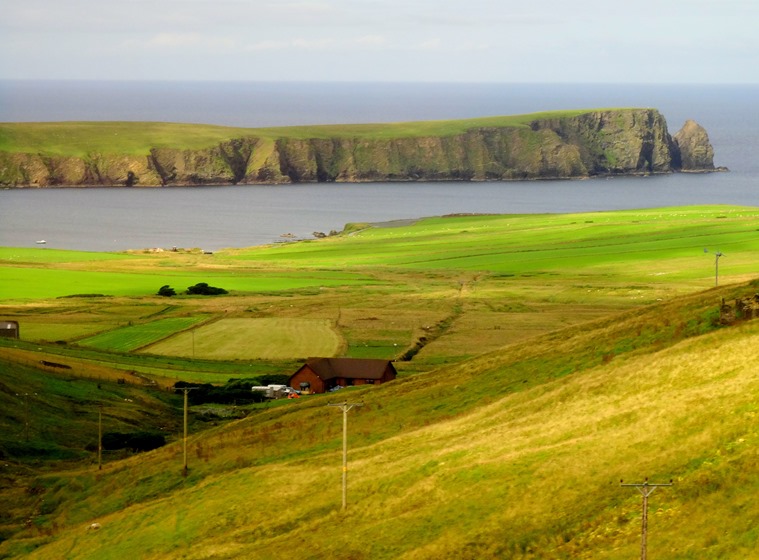 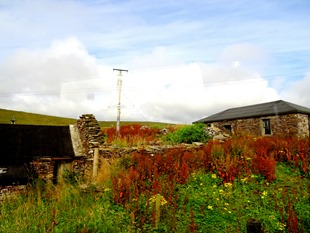 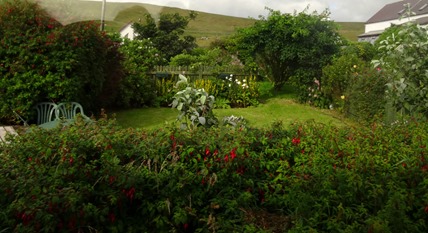 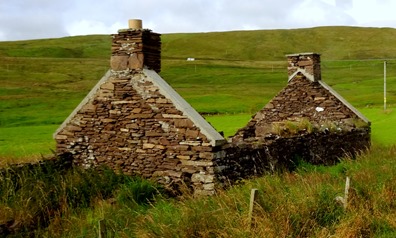 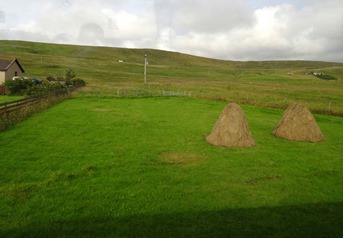 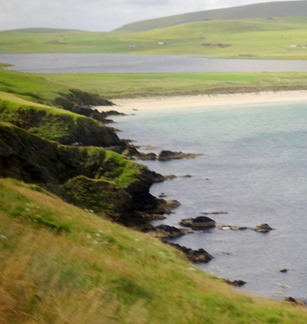 We saw Mousa Island, now uninhabited but it has a famous tower built during the Iron Age. And we saw some fishermen who were cleaning their fish & tossing the entrails to the excited gulls gathering around their boat. 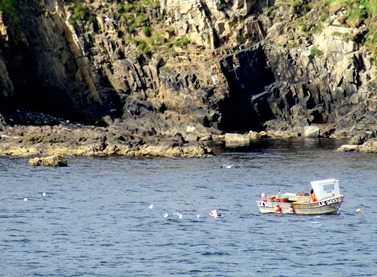 What would a visit to Shetland be worth if we didn’t see Shetland Ponies? We stopped along the way to meet some up close, & they came running over as we have seen with other animals used to getting a treat from tour buses. Even when they have their heads up they are not as tall as I am.

Then we reached Sumburgh Head, the southernmost point in Shetland. We parked by a marvelous mid-19th Century hotel that looked like an old castle. On a hill nearby was Sumburgh Lighthouse, the oldest lighthouse in Shetland, built in 1821 by Robert Stevenson who was a prominent lighthouse builder and father of writer Robert Louis Stevenson. 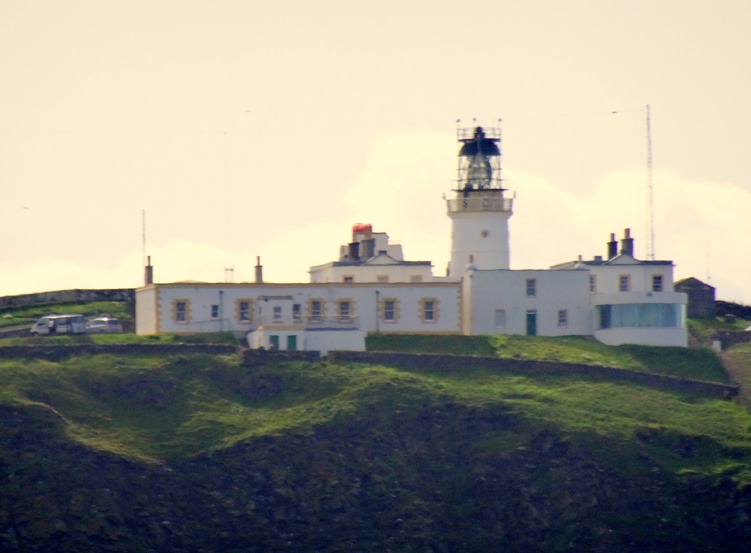 Right next to the hotel was a field enclosed by stone walls containing more Shetland ponies. 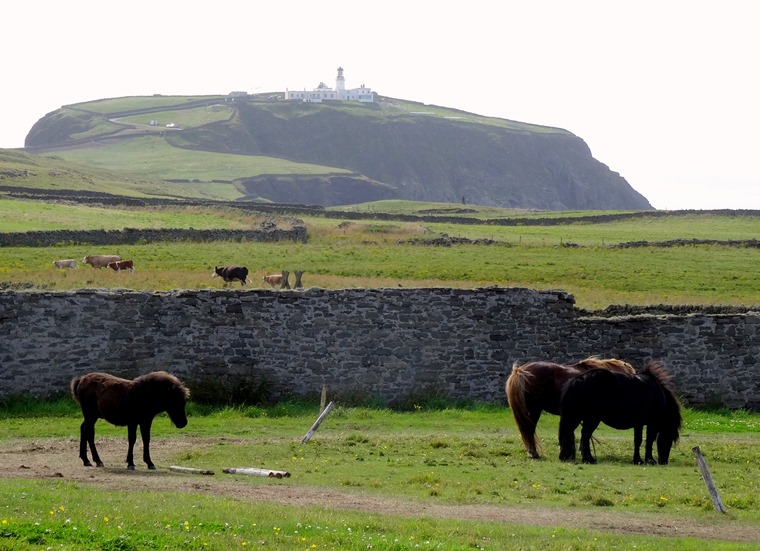 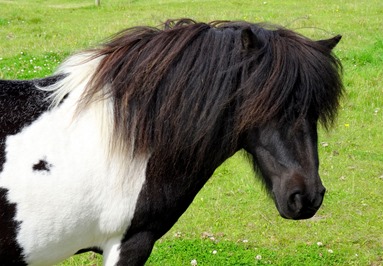 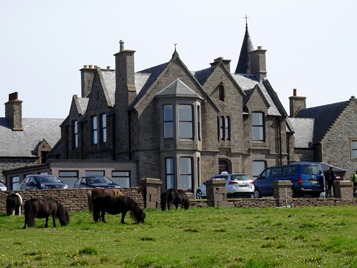 We walked from there to the main object of our trip, the Jarlshof archaeological site. The name Jarlshof, which means lord’s house, was coined by Sir Walter Scott who visited the area in 1814 & included it under that name in his novel The Pirate. (“Jarl” was a Norse word that evolved into the English “Earl” after the Norse conquered most of England). At the time Scott visited the only thing visible was the remains of a 16th Century fortified house. It was built on the foundations of a medieval stone farmhouse by Robert Stewart, brother of Mary Queen of Scots, and expanded by his son Patrick Stewart (no, not the star ship captain). It was abandoned in the late 17th Century and fell into disrepair. Here is Scott’s description in the novel of how it looked in 1814:

“[A]n ancient Earl of the Orkneys had elected this neck of land as the place for establishing a mansion-house. It has been long entirely deserted, and the vestiges only can be discerned with difficulty; for the loose sand, borne on the tempestuous gales of those stormy regions, has overblown, and almost buried, the ruins of the buildings; but in the end of the seventeenth century, a part of the Earl’s mansion was still entire and habitable. It was a rude building of rough stone, with nothing about it to gratify the eye, or to excite the imagination; a large old-fashioned narrow house, with a very steep roof, covered with flags composed of grey sandstone, would perhaps convey the best of idea of the place to a modern reader. The windows were few, very small in size, and distributed up and down the building with utter contempt of regularity. Against the main structure had rested, in former times, certain smaller compartments of the mansion-house, containing offices, or subordinate apartments, necessary for the Earl’s retainers and menials. But these had become ruinous; and the rafters had been taken down for fire-wood, or for other purposes; the walls had given way in many places; and, to complete the devastation, the sand had already drifted amongst the ruins, and filled up what had been once the chambers the contained, to the depth of two or three feet.”

Severe storms in the late 19th Century washed away some of the topsoil in this area to reveal for the first time earlier ruins on the site. The area was excavated between 1925 and the 1950’s, uncovering a complicated mix of buildings and artifacts dating from about 2500 BC. There are a lot of excavations in a very small area & it can be pretty confusing trying to tell which are which. So I will do my best to explain this stuff, but I may not have it all correct.  The earlier people built round stone walled houses while the Vikings who first came in the 8th Century built longhouses with straight walls & corners. This was because the Vikings were used to building with straight wooden logs or planks, which do not easily adapt to round walls, so even though they built with stone here (no trees in Shetland at that time) they adhered to their traditional rectangular shapes. 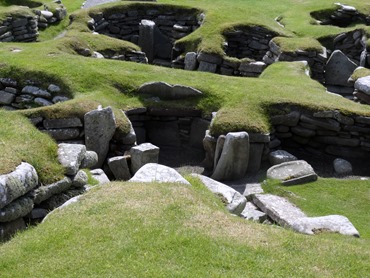 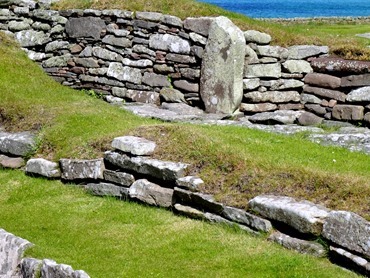 Just beyond the Stewart house are some “wheelhouses,” called this because they are round & have spoke-like interior walls. They are mostly underground & are prehistoric in origin. 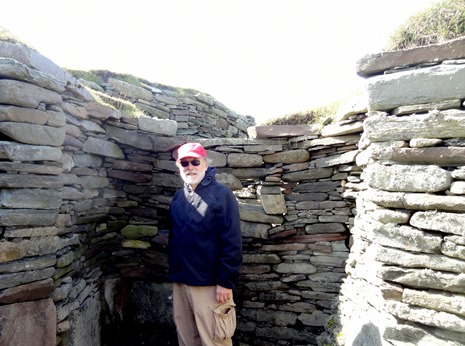 There was a nice little visitor’s center with some artifacts & explanation, but we did not have much time to spend there (in fact our whole visit to Jarlshof was too rushed to fully understand it). One item that caught our attention there was an old Viking board game called Tafl.  Several broken tafl boards were found on the Jarlshof site. The idea of the game for one player is to move the king (the center piece with a dot on it) to the edge of the board while the other player tries to capture it by surrounding the king with his own pieces. The pieces move like rooks on a chess board.  Apparently this game was later overshadowed by chess, a more sophisticated game with a similar idea.

Leaving Jarlshof for the drive back to Lerwick we were stopped at the Sumburgh airport, the main commercial airport in Shetland. Its relatively short runway crosses the main north-south road & we were stopped to permit a plane to take off.  Further on our guide pointed out to us some old round stone buildings still in use & a farmhouse (called a croft house, generally denoting a tenant farmer) built on the model of a Viking longhouse. The Viking design involves a rectangular living quarters with utility buildings connected on the ends so that everything can be reached without going outside. This type of house is still popular in Shetland, according to our guide.

Our guide pointed out where peat was being harvested to use as fuel for fires in winter. Peat is organic matter that decays and compresses over time.  It accumulates at a rate of about 1 mm per year, not nearly enough to replenish what is harvested. It is dug up in rectangular shapes & left out to dry before being moved to where it will be used for fuel.

We left the main road to visit a small village called Hoswick in an area called Sandwick where (probably not coincidentally) our guide lives. The Hoswick Visitor Center is in a former tweed weaving mill & includes a small cafeteria, a gift shop and a museum that includes displays of old textile machinery & radios. The most interesting display was about a landmark legal case in 1888 in which the local tenant farmers had beached a lot of whales & the landlord asserted his ancient right to a percentage of the proceeds. The court sided with the farmers setting an important precedent. Near the visitor center is a knitwear factory with a shop. We looked but didn’t buy.

Driving though the town on our way back to the main road we passed a walled cemetery by the water, haystacks in long rows and individual and a sheep standing alone on a hill.  There was a large fire burning by the beach but we never learned what it was about. 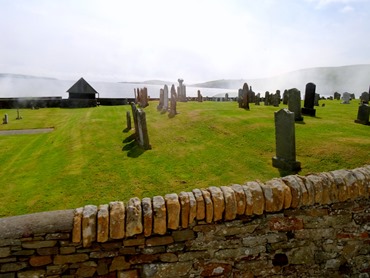 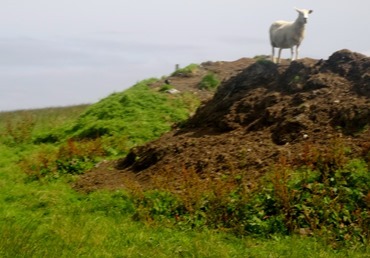 Before getting back to Lerwick, this would probably be a good place for showing a variety of wildflowers we came upon in Shetland. All but the last we came upon by the side of the road during the excursion. 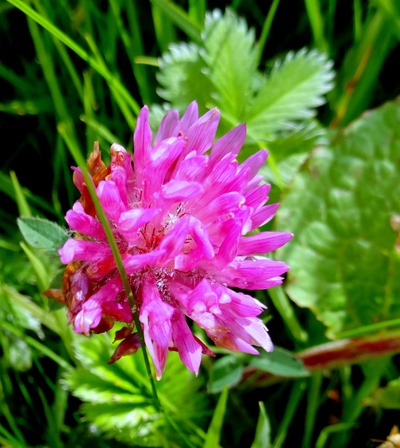 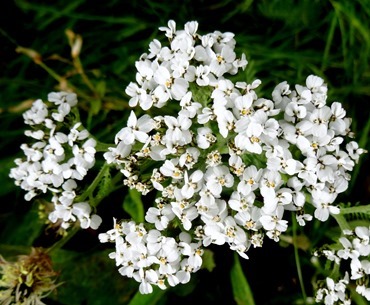 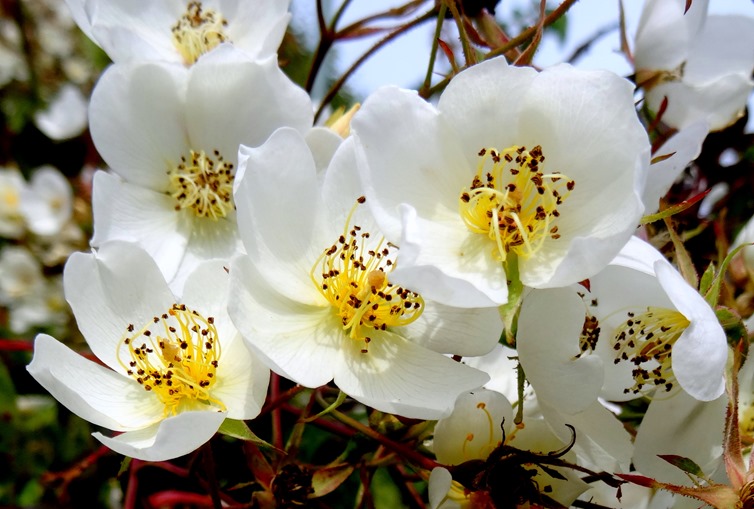 On the outskirts of Lerwick we drove past Clickimin Broch. Brochs are round structures found mostly in Scotland.  Clickimin Broch was first erected in the 1st Century AD and located on an island in a lake. Unfortunately we were moving so the picture is a little blurred. 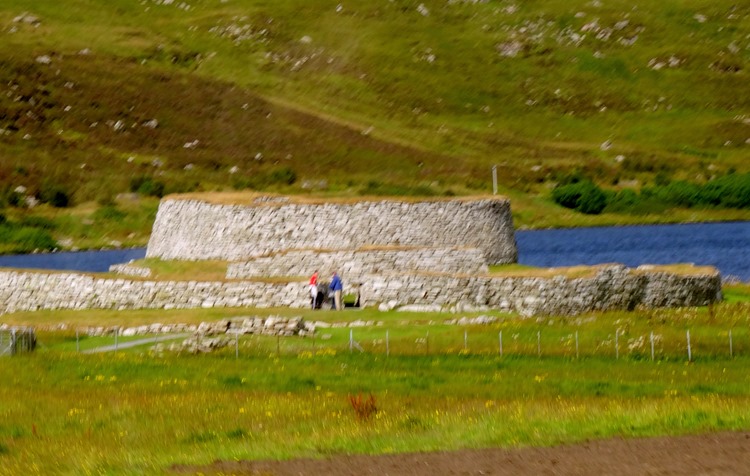 Our excursion ended with a brief drive through the streets of Lerwick, a town with a definite character involving stone buildings & walls & lots of chimney pots. 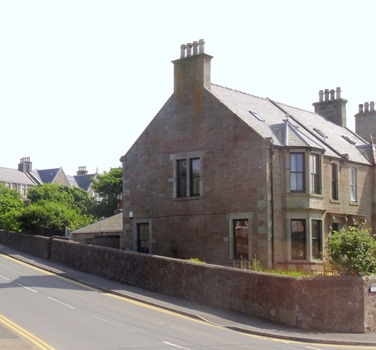 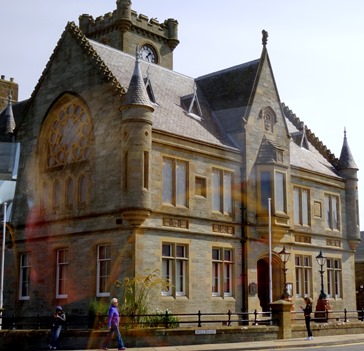 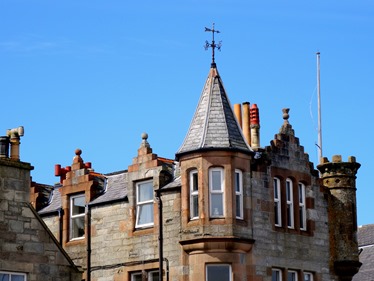 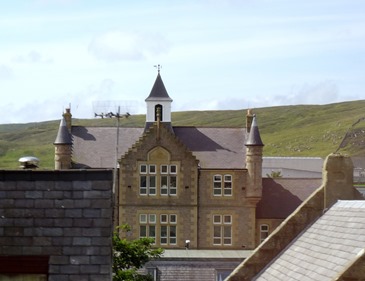 After leaving the bus at the harbor we spent some time walking around the commercial district looking in shops (mostly knitwear, books & gifts).  It got cold and windy, but we still decided to find the library.  It was on top of a hill overlooking the harbor, up a street that was steep enough that part of it was a stairway. The library was housed in what had been a church, a stone building with stained glass windows.  The sign by the door had a snail painted on it.  When Mary asked what that was about the librarian said it was added by an anonymous person that had been painting snails on signs all over town.  It was a local mystery.

Just up the street was the Sheriff’s Court, built in 1875, where weddings are held.  And sure enough there was a wedding that appeared to have just finished. Its hard to see, but the groom appears to be wearing a kilt. 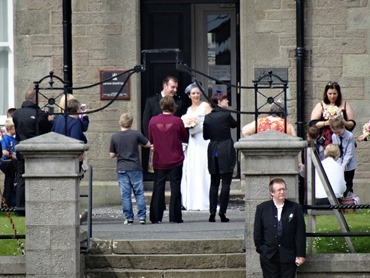 It was cold & we were tired, so there aren’t many pictures of Lerwick here.  But we did find the rooftops with their array of chimney pots to have a certain charm, looking like something out of Mary Poppins. 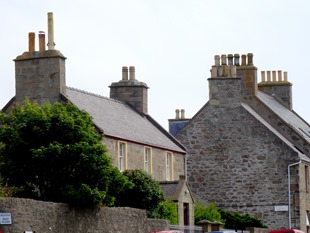 And so, very tired & not feeling too great, we returned to the ship for the trip back to Iceland.

This entry was posted on September 2, 2014 by Rick. It was filed under Voyage of the Vikings .