Amsterdam anchored off the coast of the island of Niue early on the morning of January 28.  Never heard of Niue?  Well, you aren’t alone. This is the largest raised coral island in the world and also the world’s smallest sovereign state.  Home to some 1500 people, give or take a hundred, it also boasts the highest percentage of elected representatives: 1 for every 65 people.  There are actually twice as many Niueans living in Australia as on the island itself, and more than 12 times as many living in New Zealand.  That exodus was probably exacerbated by Cyclone Heta, which devastated Niue in 2004 with 150 mph winds and 90 foot waves that cleared the island’s cliffs. Although independent since 1974, the islanders are citizens of New Zealand.

Many cruise ships miss scheduled stops here because of ocean conditions (no reef to protect the waters around the island). Our friend Bob, who has been on half a dozen HAL world cruises, told us that he had been scheduled to land here four times but had never made it ashore.  But we did . . . two for two in difficult islands!

There were no shore excursions offered on this tiny island.  In fact, this was a Sunday, which in Polynesia is a very serious matter with everyone attending church and businesses all closed down.  We were told HAL had to negotiate with the islanders even to get permission to come ashore here on a Sunday.  Fortunately, those negotiations succeeded, but still there was little to see or do since transportation was largely unavailable beyond walking down the one main road of Alofi, the nation’s capital and largest town.

So, after a leisurely breakfast, we tendered ashore. The Captain & his wife came ashore on the same tender.

We walked up the winding road in the first picture above and walked to the right.  There we found a church with services in progress.  We had heard much about the beauty of the singing of Polynesian choirs so we walked over to the church.  The singing was indeed nice, in four part harmony, but probably not what it usually is because about a third of the congregation was from the Amsterdam. Several dogs were lying patiently near the front door waiting for their masters to finish the services.  Around the church was an interesting graveyard, with many graves decorated with fresh flowers. One grave stone looked like it had been split by lightning. We actually saw graves in many places in Alofi, some in people’s yards & others near the cliffs that border the water. 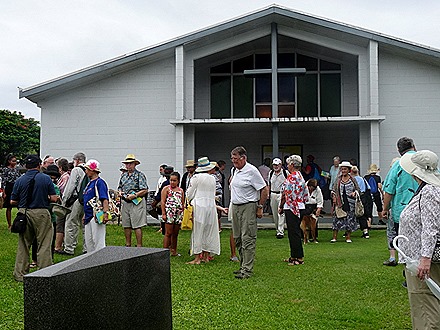 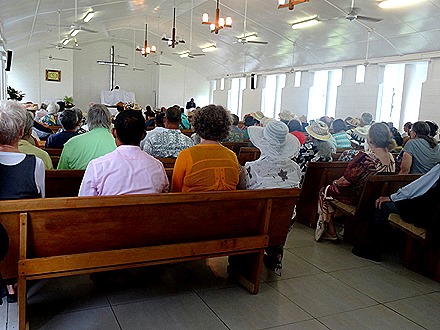 Behind the church near the cliff was a small area with a tomb in it.  Rick walked out there, but wasn’t aware that this is apparently the resting place of two of Niue’s ancient kings.  It had a fine view of the tender dock & the waves that constantly run in over the rocks nearby. 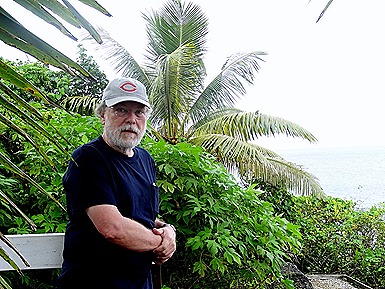 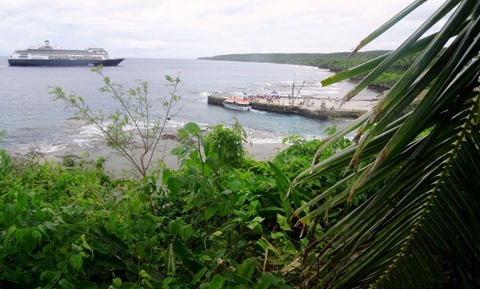 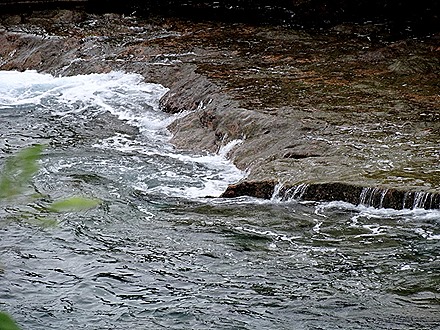 Walking up the road from the church we passed the seat of Niue’s government, a colorful hut built for an art exhibition a few years ago and more nice sea views.  Very little was open, just the tourist information stop, a small shop advertising DVD rentals (we were told it actually had no dvds) & a couple of restaurants.  The tourist information shop had souvenirs and postcards for sale, but not much else was to be had.  We continued up the road. 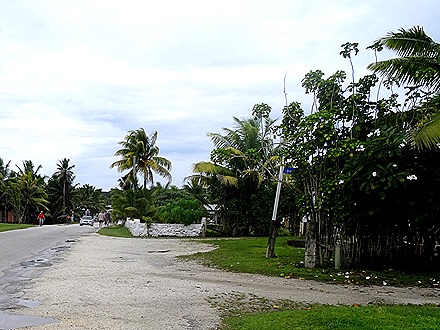 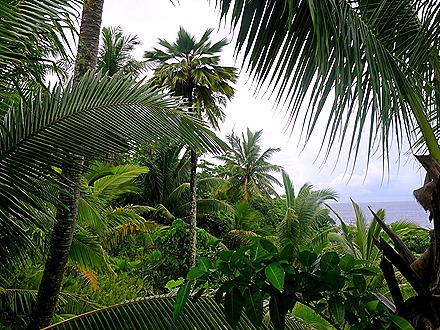 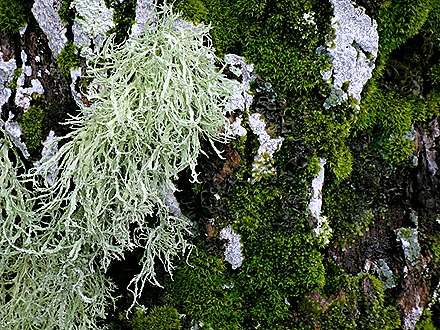 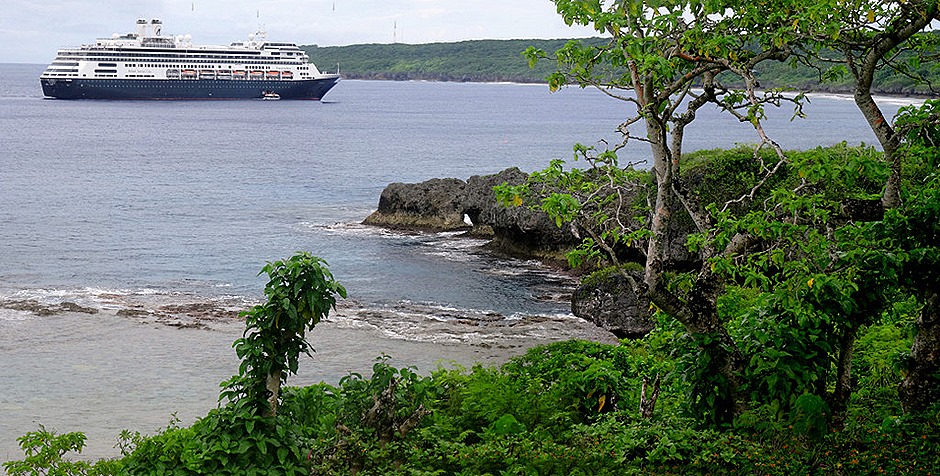 Finally we found the one historic spot in these parts.  In 1774 Captain Cook found this island and tried to come ashore. On the third try they set foot on land.  But although he brought trinkets & gifts he was driven off by spear throwing islanders with what he thought was blood around their mouths but was actually a red plant dye.  He named this “Savage Island,” claimed it for England & sailed away.  No other Europeans attempted to land here for another 80 years, when missionaries finally set up shop.  The place where Cook tried to land is called “Opaahi Landing.”  It was a very steep & slippery climb down from the road to the landing spot, so Mary stopped about halfway & Rick went all the way down to this picturesque spot. 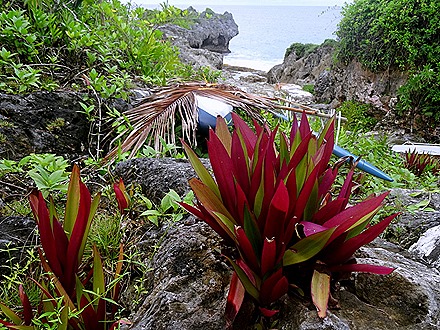 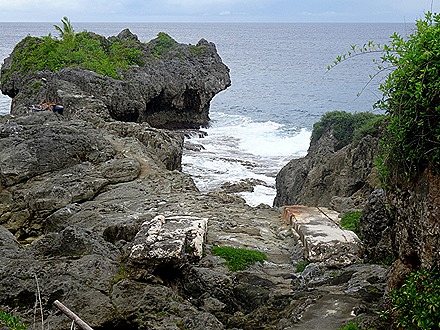 While there wasn’t much here in the way of sights, we did see some flora & fauna while walking through the town and its outskirts. 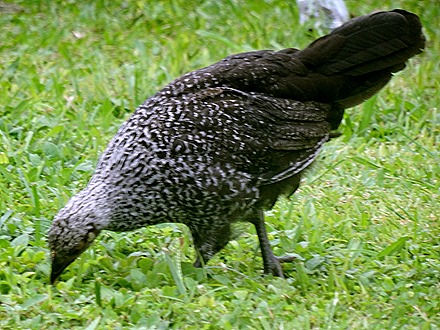 One of the more dramatic aspects of Niue is the tall cliffs that line the water.  They appear to have been worn away at the bottom only by waves, which gives them an unusual aspect of hanging out over the water.  Quite beautiful. 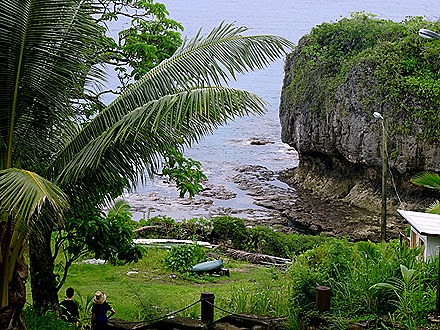 We tendered back to the ship for the sail away.  We were glad we had a chance to see this remote and not often visited island, but it is not one we would go out of our way to visit again.  Unlike the others we have visited on this cruise, Niue lacks mountains or other distinguishing geographic features and the view as we sailed away was flat & uninteresting.

This entry was posted on May 29, 2018 by Rick. It was filed under Around The World Again .