We arrived in the harbor of Napier on the morning of February 4.  The Maori called this Ahuriri & Captain Cook (who else?) sailed by & described the place while exploring New Zealand in 1769.  The town was founded by Europeans in the mid 19th century & now has a population a little over 60,000. It is located in the wine making region of Hawke’s Bay.

But what made it famous was a devastating earthquake in February of 1931 that measured 7.9 on the Richter scale & destroyed just about the entire city.  Hundreds of aftershocks hampered rescue efforts over the next two weeks & fire destroyed what was left after the earthquake. The earthquake also raised the land almost 3 meters, adding some 300 square kilometers to the dry land.

The survivors were, however, determined to rebuild their city & they did so in record time over the next several years.  This was the early 1930’s when Art Deco was the reigning architectural style, so most of the new structures in Napier were built in that style or the California Mission style that was also popular at that time.  Because few cities were doing much building during the depression, Napier is now considered one of the two primary Art Deco towns in the world, along with part of Miami Beach.

We took the shuttle into town & spent the day walking around on our own.  It was Sunday, so a lot of businesses (including restaurants) were closed.  But much of the town itself was quite attractive.  The bus let us off on a beach side road called Marine Parade.  We were told that this street was the sea wall before the earthquake, but a large & attractive waterside park is now on land beyond it that was raised from the water by the earthquake.

In front of the Information Center where the bus dropped us off was an interesting fountain, & down a flowered walk was “Pania of the Reef,” a sculpture named for a Moari myth that is one of the most photographed attractions in New Zealand.  Near the colonnade there is an orchestra shell & across the street is a domed building that is one of the art deco landmarks visible from around the city.

Next to the T & G Dome is the Masonic Hotel, both built in the 1930’s.  Nearby was a monument to those lost in the Boer War in South Africa.  Given the early date of the Boer War we assume this must have survived the earthquake. 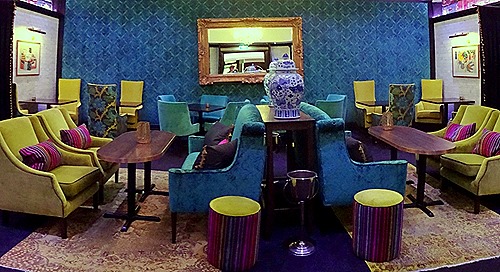 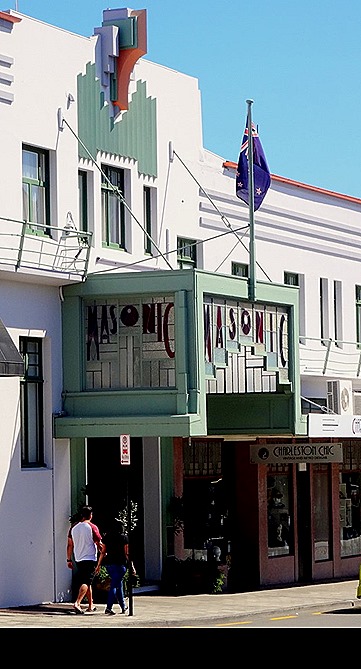 Across the street from the hotel is the Hawke’s Bay Museum.  We were originally attracted to it because its front door said “Napier Library.”  It turned out that the library is being housed temporarily in the back of the building.  More on that later.  The museum was quite interesting, though.  There was a large room of Maori artifacts & the basement had an extensive exhibit about the earthquake, with artifacts & movies of survivors recounting their recollections.  Quite worth visiting.

Walking around the town we saw a lot of buildings with interesting art deco facades. Most were commercial buildings, which tended to have art deco in the upper level and a storefront on the lower level with a solid awning-like structure over the sidewalk.  As a result you could only see the art deco portion from across the street and the commercial first level detracted from the buildings’ architectural effect.  It’s a shame, but this is not Disneyland, people actually carry on their lives here. 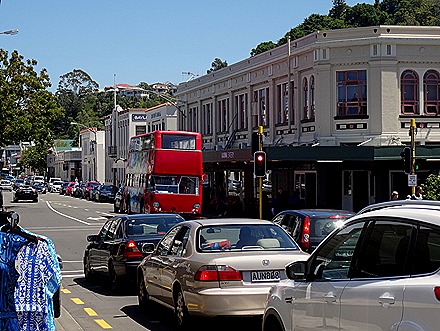 Notable art deco buildings included the ASB Bank, which has a gilded Maori design above the windows, and  the Daily Telegraph Building, which once housed the local newspaper (since moved to a neighboring town).  We reached the Municipal Theater later in the day and as we photographed it from the other side of the street a man walked over from the front of the theater.  He was the caretaker and told us that he would have shown us through the building if he hadn’t just locked it for the night.  He told us it was designed in the 1930’s by an architect who was convinced that movies were the future and stage productions a thing of the past, so he designed it exclusively for movies.  He also put in only one restroom backstage, apparently because he thought there wouldn’t be many actors to use it.  Funny how short sighted people can be. 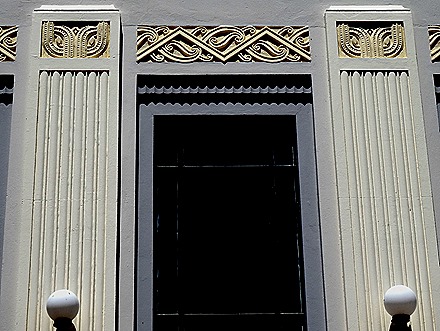 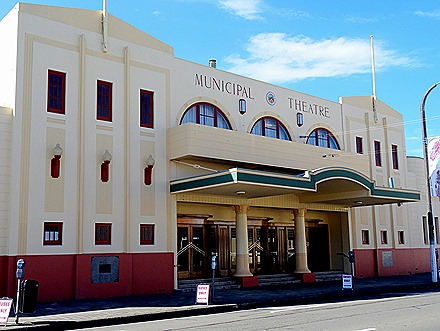 Now the library, a complicated situation.  We walked to the old library.  It wasn’t really all that distinctive, but outside was a plaque to Becky, the library building site dog.  It seems that while the library was under construction one of the workers ate his lunch while waiting for a concrete delivery.  He couldn’t finish so he gave his last meat pie to Becky, who buried it nearby for later consumption.  Seconds later that area was covered by concrete and the pie lies there still under the entrance to the library. Be that as it may, this library is now closed up because it was found not to be earthquake proof. 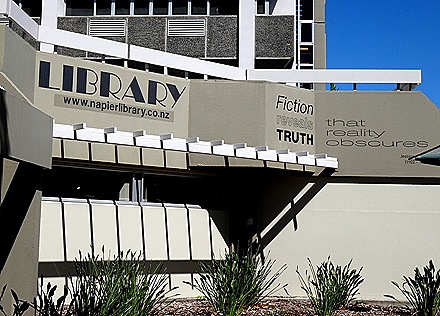 So the library was moved to a much smaller space in the back of the Hawkes’ Bay Museum, which was set to open a few days after our visit.  It has not been determined yet whether it will stay there permanently, or the old library be upgraded to be earthquake proof, or it will go somewhere else.  We could only look in from the outside, both from inside the museum and from outside on the street behind. 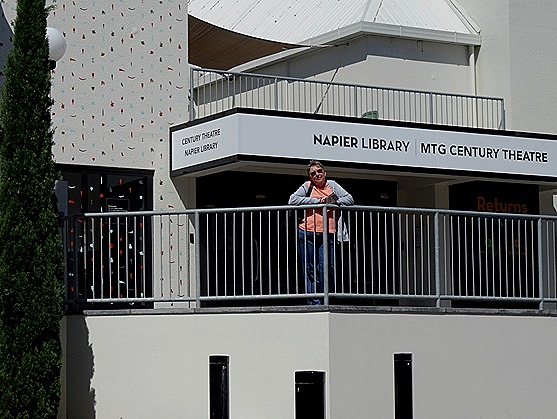 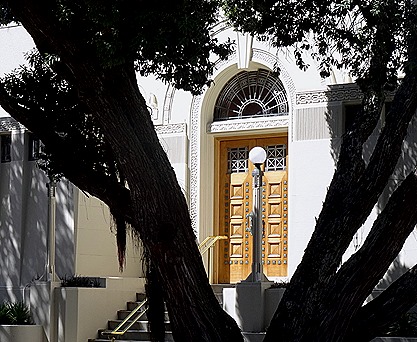 It was a bit hard to find an open restaurant for lunch so we ate at an Irish pub called The Rose.  We had pizza & beer and it was good.  The bartender carved a shamrock in the foam of the beer.  Rugby was on TV and we watched Wales destroy Russia, 35 to 7.  There was a large open window by our table, through which the waitress stepped to serve the folks outside on the sidewalk. 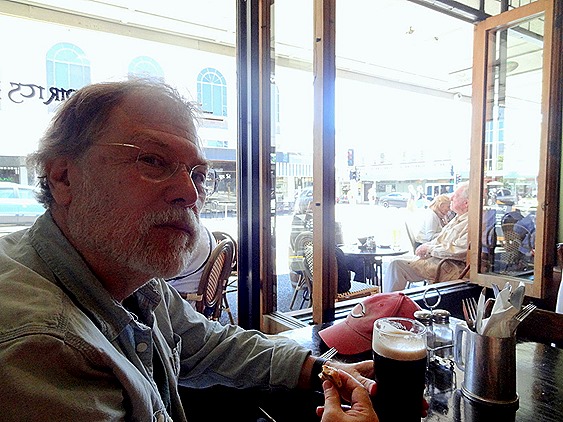 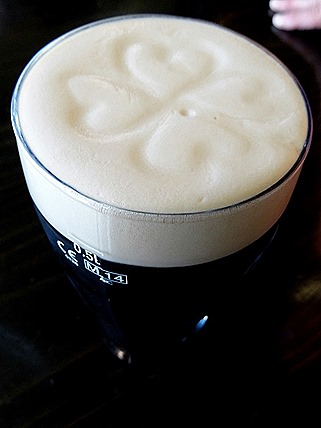 So here are a few flowers that caught our collective eye in Napier.

There were some wall paintings, a sculpture of a flower, and a sign I though was funny: “World Famous in NZ,” something of a contradiction in terms.  The fellow noticed me photographing it, so I asked “World famous, just in New Zealand” & he responded “A bit of bullshit, but every bit helps.” 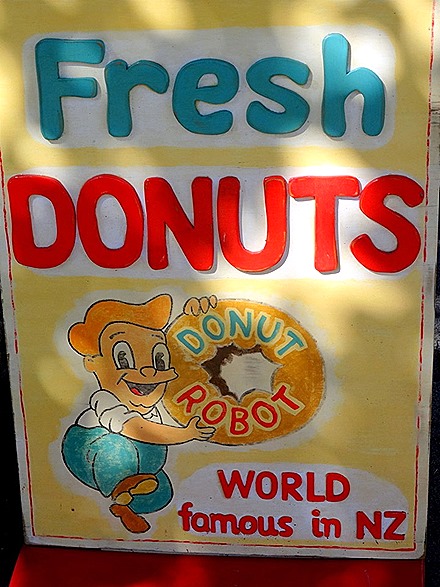 Last but not least is the St Johns Anglican Cathedral, very clean lined with little decoration. The tower was visible from much of the downtown.  We wanted to see the inside but never found an entrance. On the lawn in front was a large stone cross, which must have survived the earthquake because it was in a picture of the earthquake rubble we saw in the museum.

Back at the Marine Parade we boarded the bus & returned to the dock, bidding Napier a fond farewell after a pleasant and interesting visit.

Napier is a major port in this part of New Zealand with wood being one of the big exports.  We were told it is mostly bound for China.  The folks of Napier are very enthusiastic about their 1930’s heritage and outside the ship were parked several vintage cars driven there by folks in period dress.  There was also a Dixieland band.  Across the bay, beyond the town, was a row of cliffs that looked a little haunting in the lowering sunlight. 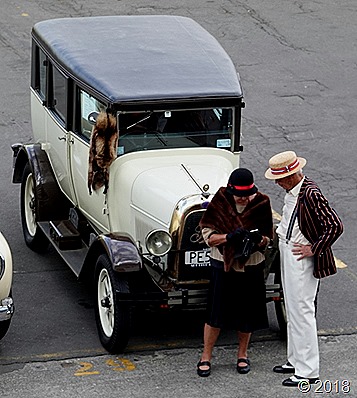 We went to bed after dinner while the ship headed south for our first visit to the south island of New Zealand.  In the bedroom we were welcomed by one of our more delightful cabin mates.

This entry was posted on June 20, 2018 by Rick. It was filed under Around The World Again .