We visited Bridgetown, Barbados. on March 21.  We were told the night before that Barbados only allowed cruise passengers onto the island as part of a ship’s tour or with a certified taxi.  This was not a big surprise since we had read that a number of Caribbean islands had disallowed cruisers from setting out on their own, and this wasn’t a big disappointment since we had been here twice before:

But it never hurts to ask, so we left the ship after breakfast and went into the port to see if we would be restricted.  Low and behold, no one said anything to us as we walked through the port and up the lovely seaside walk into town.

In the center of town we walked past the legislature building and the Careenage, where small boats come into town.  Our primary goal was the synagogue, which had been closed when we were here before.  It wasn’t that far from downtown but was hard to find without a map.  We had a map in a smartphone app but when we tried to follow its directions we ended up walking in circles (even less fun because it was so hot).  Finally, we just used the map in the old fashioned way without directions and found the synagogue fairly quickly.  Outside the entrance was a bush with nice purple flowers; the lady in the ticket booth said that on some days it blooms purple and on others white. 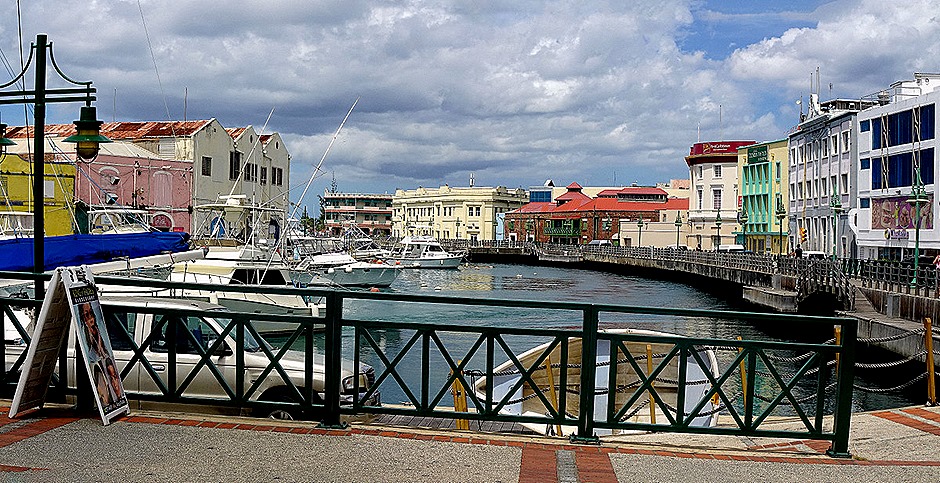 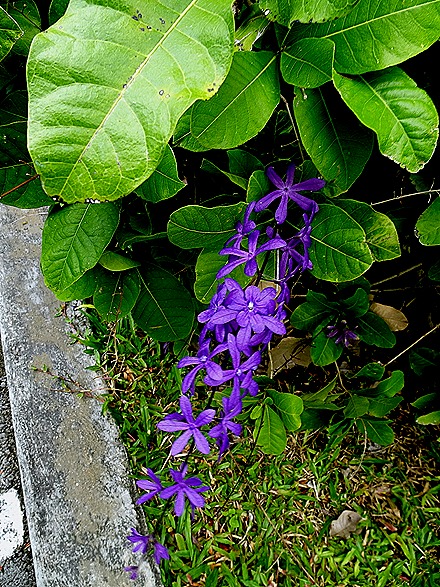 The Nidhe Israel Synagogue was first built here in 1654 by Jews fleeing Recife, Brazil, after the Portuguese instituted the Inquisition there when they supplanted the Dutch.  Rebuilt after being destroyed by an 1831 hurricane, it was ultimately sold in 1929 and was altered for several other uses after that.  In 1986 the Barbadian government agreed to donate the building to the National Trust and it was restored to its original condition and rededicated as an operating synagogue for the small Jewish community here.  They continue to hold services here to this day.

By happenstance, we arrived shorty before a tour conducted by a member of the congregation was scheduled to begin.  We were invited to join and were very glad we agreed to do so because we learned much more than we would have walking around on our own.  It started in the main sanctuary of the synagogue, just inside the door in the picture above, where our guide explained the history of the synagogue and the Jewish community of Barbados.  Only a few items are original to the old synagogue, notably the clock on the front of the women’s balcony above the bimah and the ark holding the Torahs (notable because those are the items I still remember).  For a transplanted American who retired here only a few years ago our guide was extremely knowledgeable. 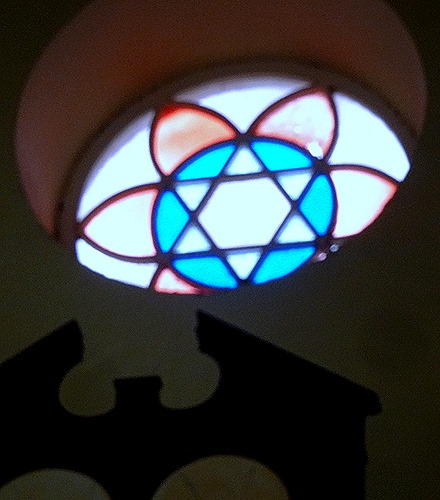 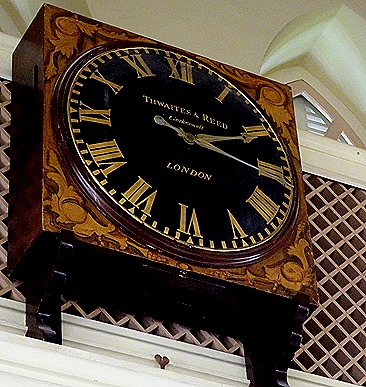 In 2008 an archaeologist looking for the foundations of the rabbi’s house discovered a step leading down from the surface.  Excavation uncovered a stairway down to a tile lined pool that is thought to have been a Mikveh, a ritual bath for Jewish women, built a few years after the synagogue but probably lost after the hurricane of 1831.  The pool is fed by an underground freshwater spring and our guide told us that efforts to find its source have been unsuccessful so far.  A stone structure (seen at the right of the picture of the synagogue above) has been built over the Mikveh, but it is unknown what the original might have looked like. The alcoves in the wall above the pool were probably for lanterns to enable bathers to see under ground.

On the other side of the Mikveh and the synagogue is the cemetery.  Some of the Jewish gravestones date back 400 years and a few Quaker graves have been found in this area as well.  There is a sign outside the cemetery that shouldn’t be necessary, but apparently it was. 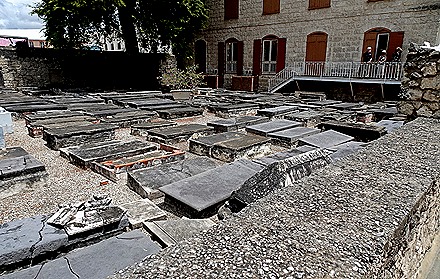 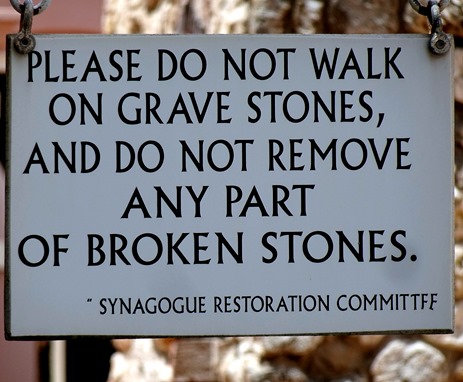 We walked back to the ship, taking the boardwalk path along the Careenage then the walk along the seaside again  At one point we encountered a lot of crabs congregating in a concrete culvert conveying water into the sea.  So ended our visit to Barbados. 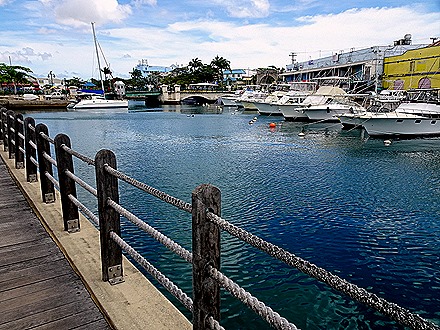 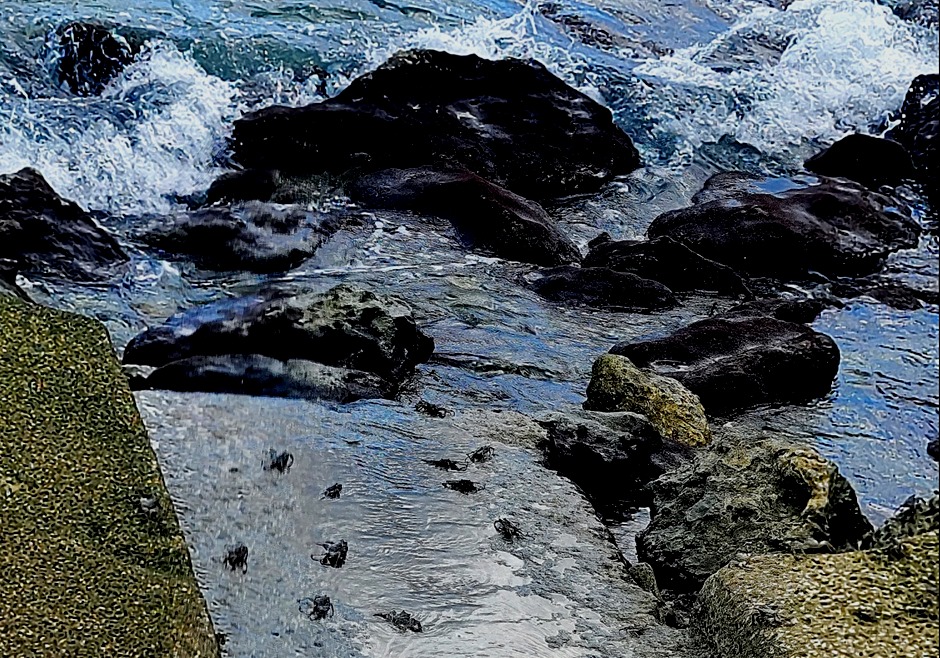 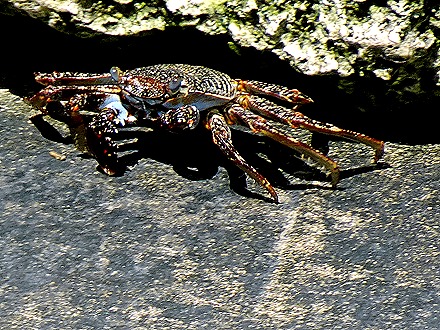 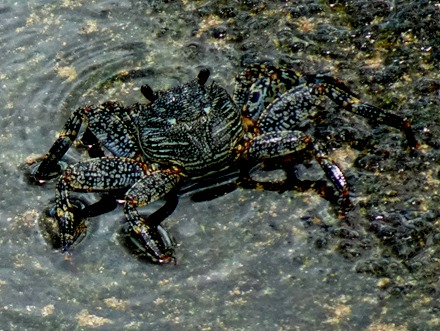 This was our first visit to Dominica (emphasis on 3d syllable, like the Singing Nun’s song, if you are old enough to remember that).  The original itinerary had us visiting Martinique, a French province that is the next island over, but Dominica was substituted about 2 months before departure, presumably because of political unrest.

Dominica is a particularly lush island situated between the French islands of Martinique & Guadalupe.  It was occupied by the Carib people (after whom the Caribbean Sea is named) when Columbus sailed by and named it Dominica, and there is still a small community of them on the Eastern side of the island.  Dominica became a British colony in 1763 at the end of the Seven Years War (French & Indian war in the US) and achieved independence as a republic in 1978.  Roseau is the capital and largest city in Dominica (about 15,000) and that is where we docked.

Unlike Barbados, Dominica was still strictly enforcing its pandemic ban on individuals entering on their own.  There was a small area on the waterfront next to our dock where vendors had their tents but all the streets leading out were blocked and patrolled by police.  Since we had not been here before this was pretty disappointing.

Fortunately for us, though, this ban was inapplicable to ship sponsored excursions and we were booked on one.  After boarding the bus we had a quick panoramic (ie only on the bus) tour through the town of Roseau, then we drove up to Morne Bruce for a nice overlook of the city and harbor.  There were gun emplacements here from the late 18th Century to the mid-19th.  In addition to the city and the ship we had views of a cemetery and the soccer stadium. 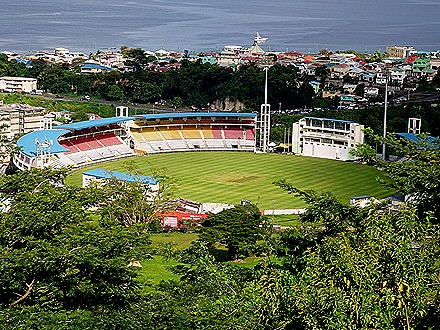 Our next stop was the pleasant Botanic Gardens.  Begun in the 1890’s, the gardens were recognized as the best in the West Indies.  In 1979, however, Hurricane David destroyed a number of the old trees.  A beobab tree fell on an empty school bus parked there, smashing it.  The bus is still there, with the tree having grown a second trunk over it.  There are other trees, including palms, bamboo and a banyan, as well as flowers and shrubs with colorful leaves.  We were told the names of all of them, but the captions on these pictures only include the names I can remember (hover mouse to see caption). 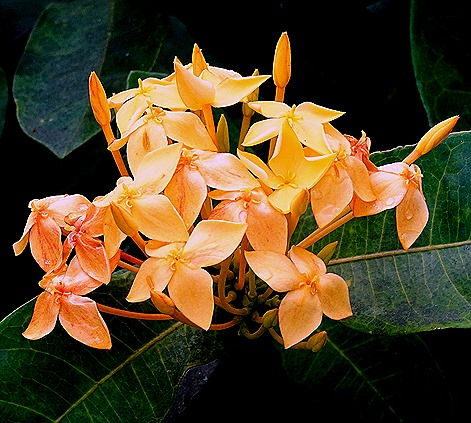 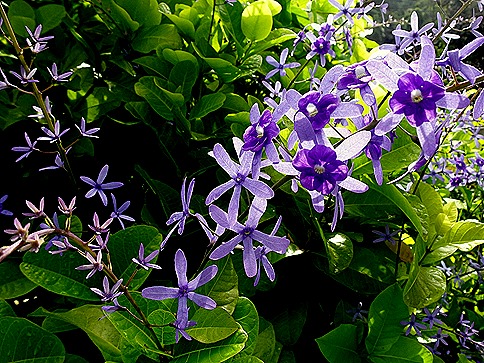 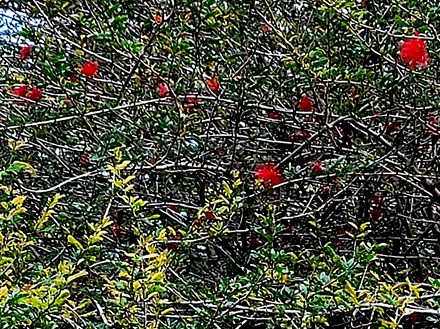 In the gardens was the Parrot Conservation & Research Centre, working to study and preserve the endangered parrots native to Dominica.  The one below is a Jaco Parrot, also known as the Red-necked Amazon parrot.

Next we drove through the green and scenic mountains in the island’s interior to Morne Trois Pitons National Park.  Established in 1975, the park has been a world heritage site for 25 years.  It is named after its highest mountain, which has three peaks.  The mountain roads have street lights that are powered by the wind.  Each has what looks like a small airplane on top with a propeller to spin in the wind and a tail to ensure it always faces the wind.  Very clever. 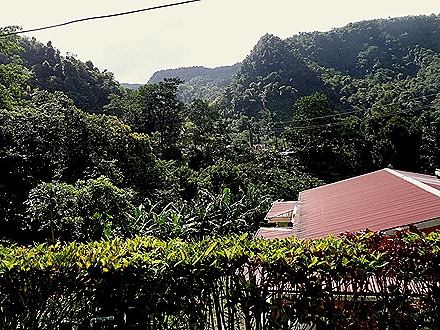 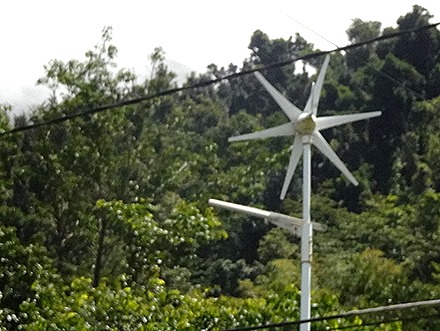 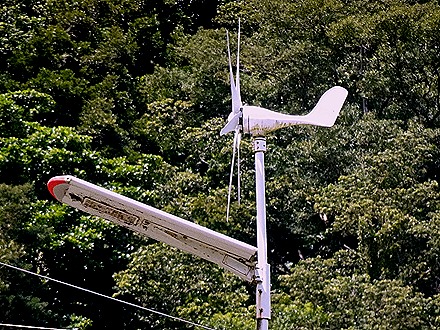 We stopped at the visitor center at the entrance to the trail to Trafalgar Falls.  It is a nice walk through deep forest to reach the falls, where there is a wood viewing platform.  This is a twin falls, with the higher one on the left (about 125 feet) called “Father” and the shorter one on the right called “Mother.”  Each falls has a separate source. There are pools at the bottom of the falls and the one on the left has warm water.  The cascade of boulders on the left under the Father falls is the remains of a huge rockslide in 1996 that covered what used to be a cascade down a face of smooth rocks. 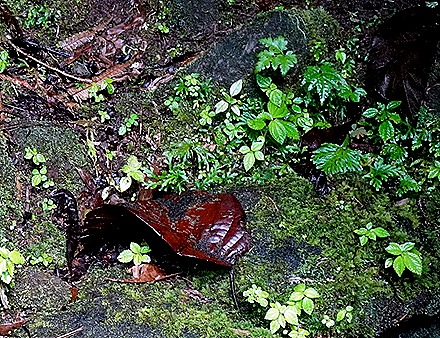 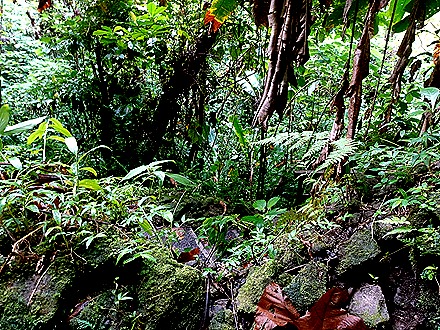 We stopped for a beer near the park then drove on to our last stop, also in the Trois Pitons park.  The Emerald Pool is a 40 foot waterfall feeding into a pool of green water (colored by light through the trees and reflecting on the green plants around the pool).  You can go swimming here but we didn’t.  The walk in to the pool was pretty easy, downhill, but the walk back was steep enough that steps had been built into the path.  Again, the walk took us through picturesque woodland. There were signs in the park reminding everyone of the pandemic and the rules to avoid it. 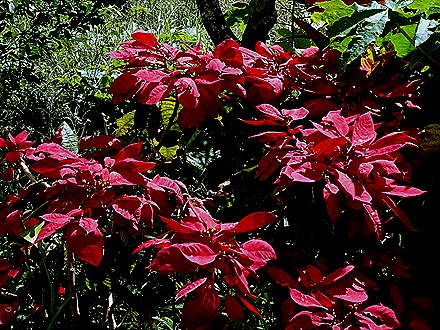 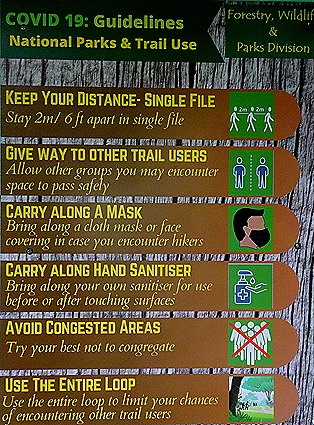 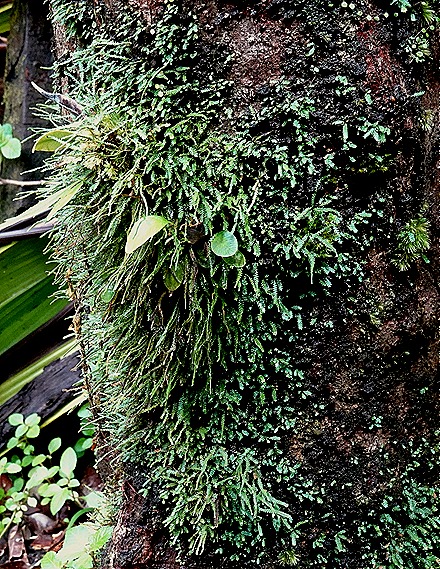 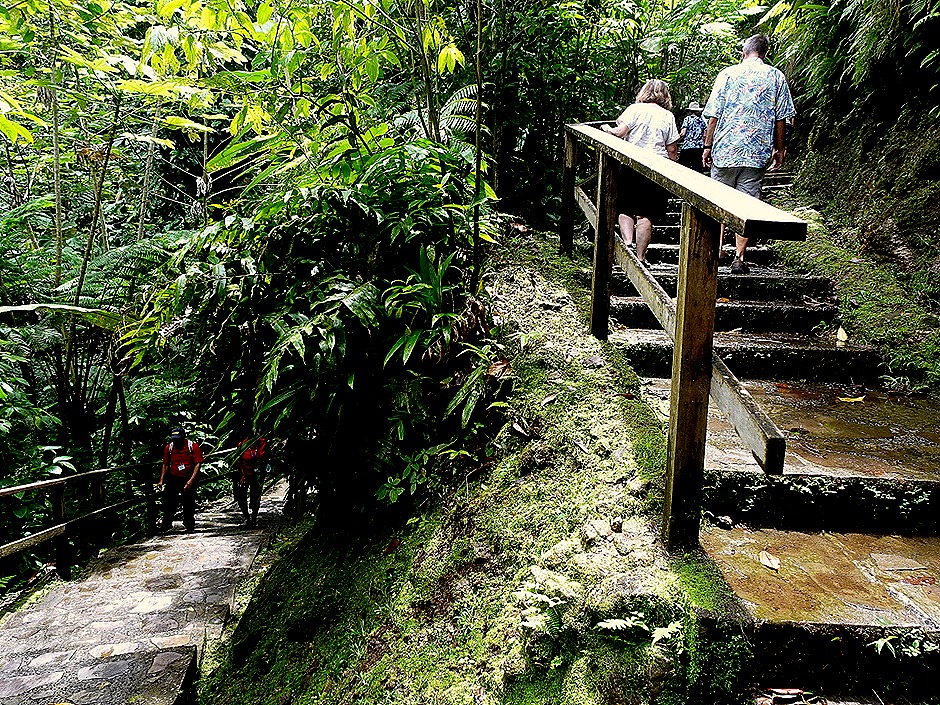 From there the bus took us back to the dock. We spent some time looking at the vendors’ wares but found nothing we wanted.  We would have walked around Roseau but of course we were now back inside the police perimeter and could not leave.  So we boarded the ship.  Altogether this was a very interesting day on a beautiful island.  There were some nice views of the island as we sailed away. 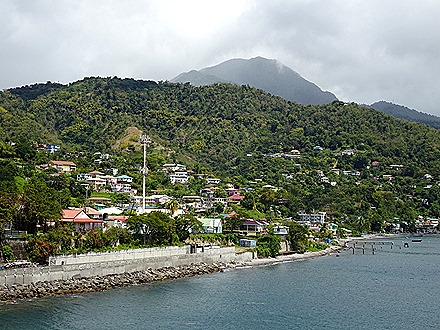 This entry was posted on August 4, 2022 by Rick. It was filed under Caribbean .