In the early morning of Thursday, March 1, we sailed into Manaus.  This is a city of almost 2 million people located almost 1000 miles up the Amazon River.

I don’t know about you, but this is not what we would have expected in the interior of the Amazon.  Manaus was founded in 1669 but really hit its stride in the second half of the 19th century as the center of the rubber boom, when huge amounts of money flowed through.  Rubber trees are native only to the Amazon region, so this area had a monopoly on rubber (one of the essential ingredients of the industrial revolution) and there were strong laws to protect that monopoly.  Natives were ruthlessly exploited as laborers to go through the rainforest where the trees were scattered & tap out the latex.  However, in 1876 a fellow named Henry Wickham smuggled 70,000 rubber tree seeds to England, where they were grown into trees in Kew Gardens in London & transferred to British possessions in Asia, the source of most rubber today.  Wickham was branded a criminal & traitor in Brazil, but was knighted in England.

During the height of the rubber boom local rubber barons built fabulous mansions & even an opera house.  The famous Teatro Amazonas (trust me, its famous even though you and we may never have heard of it before) is an elaborate pink & white structure, all of which was imported from Europe.  Even the wood floors & seats, made of Brazilian wood, were manufactured in Europe & then sent here.  It took 15 years to build, was opened in 1896, and has hosted many world-class performers (there are no highways here, so the only way for performers & the components of the building to get to Manaus was by boat, & now by plane).

We took a tour of the Teatro.  The orchestra was rehearsing on stage and the concert hall was quite elaborate (remember, every bit was imported from Europe & shipped up the river).  It was very rainy that morning (this is a rainforest, after all), so that is why Mary looks a little soggy in these pictures.

Upstairs were several salons with inlaid wood floors, painted ceilings and a porch with statues on the corners.  We had to put slippers over our shoes to protect (and help polish) the floors. 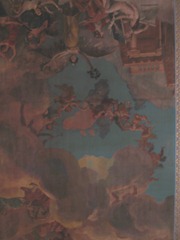 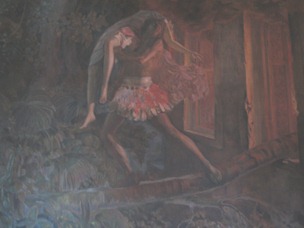 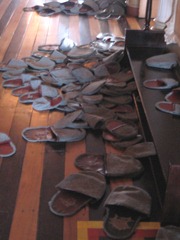 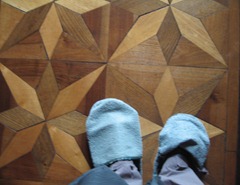 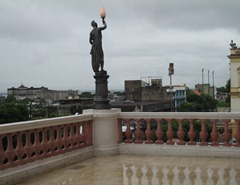 A lego model of the Teatro was on prominent display in the front corridor. 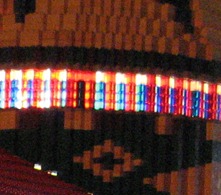 Next to the Teatro is the Palacio da Justica.  The woman with the umbrella in the first picture is the orchestra’s concertmistress.

We went to see the Cathedral, officially the Nossa Senhora Conceicao Catedral, which was nice & not overly elaborate. 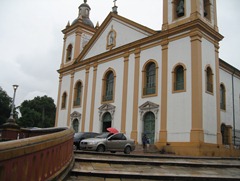 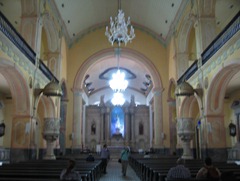 There were some nice mosaic sidewalks near the Teatro, reminiscent of Copacabana in Rio, and we passed the clock tower & many vendors’ stands. 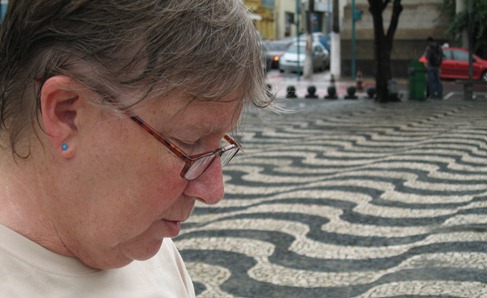 We visited a building called the Palacio Rio Negro, which was originally a rubber baron’s mansion but is now a cultural center.  Inside were some beautiful wooden stairs & rooms (presumably made in Europe too) & some unusual paintings, including one depicting Amazon women warriors attacking the Teatro with flights of angels descending.  Another showed the first flight of a Brazilian named Dumont who, they claim, invented the airplane before the Wright Brothers (a claim not accepted by anyone outside Brazil, as far as we can tell).  Just looking at that thing you can tell that it could never achieve controlled flight. 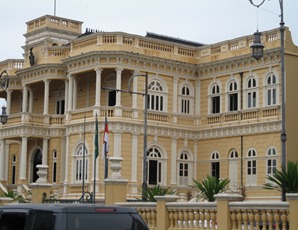 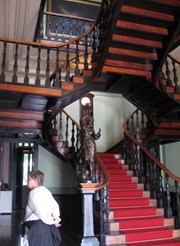 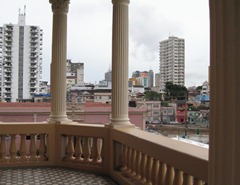 Of course, we found the Biblioteca Municipal (although it seemed too small to be the central library of such a large city) and we also walked by the old Customs House,  built in England and then disassembled and transported here piece by piece. 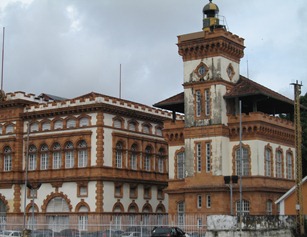 The dock area of Manaus is particularly interesting.  The river’s height varies by some 40 feet from the dry season to the wet season (we are about halfway through the wet season now so there is still quite a bit of rising yet to come).  So they have built floating docks, which rise & fall with the river.  Also near the dock are the ruins of a block of old buildings, reduced now to their interesting facades with vines & trees growing through the openings.

We had a beautiful sunset, then that night we had a Folklorico show on board the ship depicting Amazonian dancing from the Indians through the Samba.  The pictures are pretty fuzzy but they give you an idea.  After that we went to bed, having had a very full day & needing to get up early the next day. 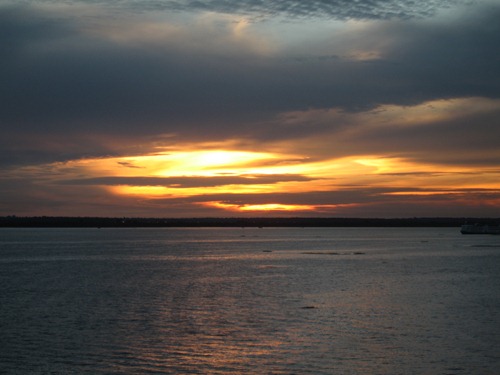 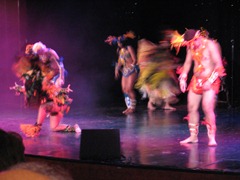 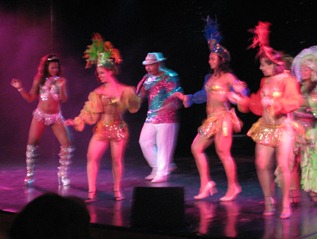 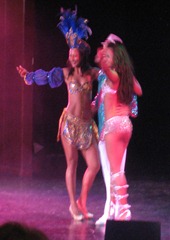 This entry was posted on March 5, 2012 by Rick. It was filed under South America Circumnavigation .