On Wednesday, February 29, we stopped for a few hours in Boca de Valeria, a tiny Amazon village of about 75 people.  This was quite a change from all the cities with millions of folks.  While it gives an idea of the lifestyle of rural Amazonia, since cruise ships have started visiting here it has changed some.  We saw a couple of satellite TV dishes & we were told that some of the monetary influx from the ships has been used to improve the schools in the area, at least one of which now has a computer.

The locals have also adapted to the ship visits to earn a few dollars.  On ship days people come from all over the area & some dress themselves or their children in colorful feathered costumes.  Some of the children have exotic rainforest pets like sloths & monkeys.  They then put themselves on display & request a dollar from anyone who wants to take a picture (you won’t see any of those here).  So, it has become kind of commercial and Disney-fied, in a rudimentary way.  We discovered later that all of the children we saw were from out of the village, because the village children were all in school while we were there.

Anyway, it was high water when we were there, so much of the land was covered with water as we went into the town. 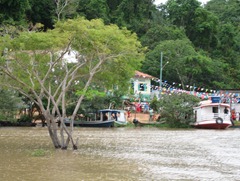 The village consists of a small church & a few small rickety looking houses built on stilts to accommodate the rise & fall of the river. 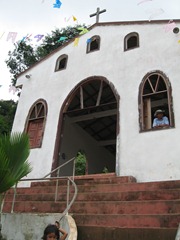 What you can’t see in the last picture is a dog that was sacked out lying on his side in the road in front of the church steps, while people were walking all around him, probably thinking “how boring, another tourist day.” The town was full of chickens, running loose on the muddy roads & under houses.

This is a river village, so of course there were lots of boats on the shore. 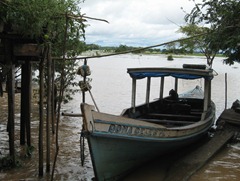 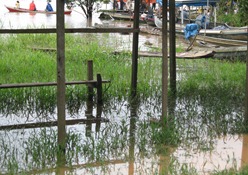 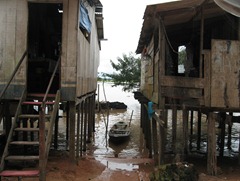 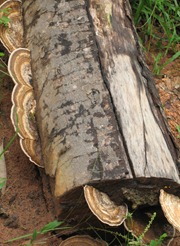 We were there too and not to forget, these folks live in the rainforest (lots of it). 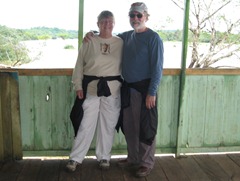 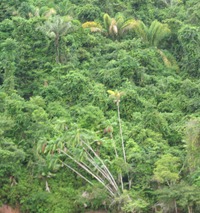 Several enterprising folks got into canoes & paddled (or motored) out to the ship, where they importuned passengers entering or returning from the tenders to take pictures & give money.  One young fellow had a pet sloth with him, which he would hold up to the tender entrance & sometimes the sloth would grab onto the ship. 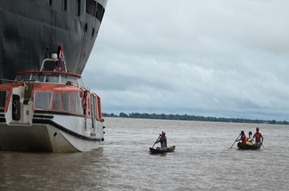 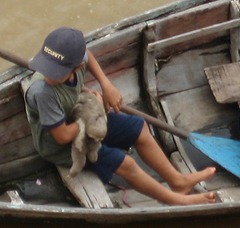 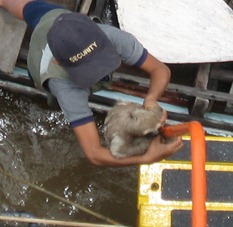 We left Boca de Valeria in early afternoon and there was a nice & calm sunset on the way to Manaus.

This entry was posted on March 1, 2012 by Rick. It was filed under South America Circumnavigation .