Crossing the Atlantic on Prinsendam

Goodbye Ft Lauderdale!  We left Ft Lauderdale at about 5:30 PM on March 14.  As I write this we are in mid-Atlantic and there is nothing around but water.  It has only been a few days, but I can see why Columbus’s men got spooked after a month or more of nothing but water and no reason beyond their weird Captain’s theories to think they would ever reach land.  But we know we will reach land this Friday, so all is well.

Before going any further, I want to welcome those of you who don’t know us but are following this blog at the invitation of friends or relatives who are fellow passengers.  These are the voyages of Rick & Mary Bader, whose continuing mission is to boldly go where no one . . . no, wait a minute, that’s not right.  But it is true that this blog is about our experiences and interests and things we think our friends and relatives might find interesting.  Although all of us on the Prinsendam are traveling on the same ship to the same ports, your friend’s or relative’s experiences on board and in the ports may be very different from ours.  So while this blog will give you a general idea about the voyage and some of the ports we visit, don’t assume that everything you see here was part of your friend’s personal experience or that the blog covers everything that your friend saw or did.  With that caveat, welcome aboard.

I also want to remind everybody of two things about reading this blog.  First, the most recent blog post will always be at the top, so the chronology is from bottom to top.  This means that when (like today, if all goes well) there are multiple postings on a single day you should scroll down to the earliest one if you want to read them in order.  Second, if you scroll your mouse over a picture a caption will pop up.  Sometimes it will just identify the picture, but often it will contain explanatory text.  So if you don’t take advantage of that feature you will be missing some brilliant writing that might be illuminating.

As I have mentioned before, the Prinsendam is a very small ship by cruise industry standards.  It has a capacity of 835 passengers (along with about 450 crew), but on this cruise we are told there are only between 450 and 550 passengers (estimates vary).  Of course, this makes the ship even less crowded than usual, and there is generally no problem finding a table in the Lido (the buffet restaurant) or a seat in the library.  I expect it also will make it easier to get off the ship in tender ports (where the ship anchors offshore and ferries passengers into port with the lifeboats, called tenders).  There are many empty seats in the main dining room and they have closed the small extra dining room.  So this will be a more intimate cruise than the last one, and maybe that will minimize some of the sharp elbows and frayed nerves we sometimes saw on our last cruise.  So here is the Prinsendam (we didn’t take these).

In the second picture look at the deck just below the orange lifeboats, the first deck painted white, which has an outside deck on which you can walk all the way around the ship (a quarter mile).  Counting from the left, the second window is our cabin (if you count 7 more windows you get to the cabin we had last year on the South America cruise). From this angle the window looks tiny, but it is actually about 5 feet wide and provides a very nice unobstructed view (mostly just water so far, of course, but we expect more later).  This cabin is about 2 feet longer than the one we had last year, which makes a significant difference in using the room.  It has a bathtub as well, which I think is pretty rare at sea (last year we had just a shower).  It is a pretty big step up into the tub, though, and I can’t imagine how some of the older people who are plentiful on this ship are able to handle it.  We actually have 2 kids on the ship this year, a 7 year old & a 3 year old.  I expect them to get very bored!

The Prinsendam was in drydock for a couple of weeks in November & we were interested to see all the changes.  Most are not really visible, such as a new propeller that is supposed to be quieter & more fuel efficient and upgraded air conditioning & plumbing, which had been troublesome.  I am told they replaced all the verandas, but we don’t have access to those.  There was a lot of talk about the Showroom at Sea being completely redone, but it looks exactly the same to us as it did last year.  The primary visible change is that the open eating deck on the back of the Lido restaurant, where we spent many enjoyable hours outside looking at the ports during breakfast & lunch, has been completely enclosed.  They did a nice job of it:  it is surrounded by large windows, about half of which can be opened (although Gildas, the restaurant manager, told us that the engineers go nuts if they open the windows because the space is air conditioned) and large skylights that let in the sun in the afternoon.  This space now  becomes the new Canaletto restaurant at night, serving Italian food by reservation (happily, it is free on this cruise).  This is still a nice place to sit and eat, out of the way from the often crowded buffet, with a different variety of orchid on each table.  We understand why this was done (it makes the space usable in bad weather), but we still miss the outside space.  The first picture below shows how this looked last year, and after that its new look. 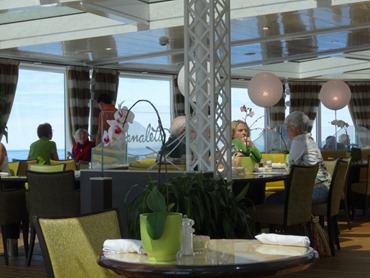 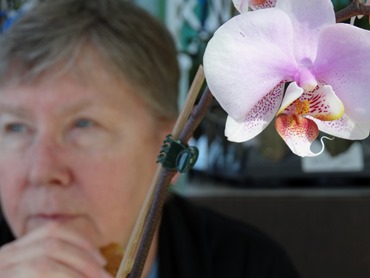 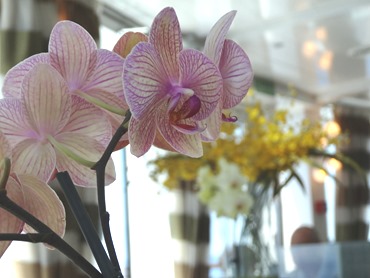 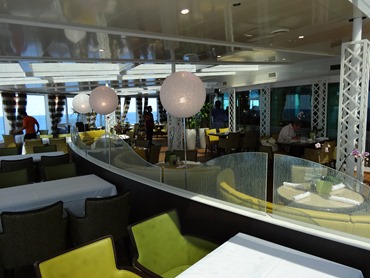 One thing that seems to be much better this year is the coffee.  Last year it was pretty dreadful, particularly in the Lido, and it was a constant source of complaint, but so far this year it seems to be pretty decent.  Passenger complaints about coffee served on ship are as old as cruising, as Mark Twain memorably explained:

I am reminded, now, of one of these complaints of the cookery made by a passenger. The coffee had been steadily growing more and more execrable for the space of three weeks, till at last it had ceased to be coffee altogether and had assumed the nature of mere discolored water—so this person said. He said it was so weak that it was transparent an inch in depth around the edge of the cup. As he approached the table one morning he saw the transparent edge—by means of his extraordinary vision long before he got to his seat. He went back and complained in a high-handed way to Capt. Duncan. He said the coffee was disgraceful. The Captain showed his. It seemed tolerably good. The incipient mutineer was more outraged than ever, then, at what he denounced as the partiality shown the captain’s table over the other tables in the ship. He flourished back and got his cup and set it down triumphantly, and said:  "Just try that mixture once, Captain Duncan."  He smelt it—tasted it—smiled benignantly—then said: "It is inferior—for coffee—but it is pretty fair tea."  The humbled mutineer smelt it, tasted it, and returned to his seat. He had made an egregious ass of himself before the whole ship. He did it no more. After that he took things as they came. That was me.

One thing we really enjoyed last year was the nightly concert by the Rosario Strings in the elegant Explorer’s Lounge before dinner.  We were disappointed when boarding to see that the Rosario Strings were not listed among the entertainers & that instead there was a group called Adagio.  But we went to see them before dinner our first night anyway, and were overjoyed to discover that it was the same musicians with a new name.  They are now a violin/piano duo instead of a trio, but little if anything seems to have been lost in the transition.  They are still playing an eclectic repertoire including popular tunes, broadway overtures, challenging classical works and a version of Orange Blossom Special that always brings down the house.  We were surprised that the pianist recognized us & welcomed us back after more than a year (as did Gildas & Widi in the restaurant and Annette the Hostess, among the very few familiar faces we have seen among the crew).  These people have an amazing memory for names & faces; they have seen quite a few passengers in the year since they last saw us.  Here is the Explorers Lounge & Adagio/Rosario in action

When we left Ft. Lauderdale the ocean was quite rough, and the Captain decided to detour south through the Bahamas to avoid some of the bad weather.  We were seated in the main dining room at the same table as last year, but on the Starboard (right) side of the ship instead of the Port (left).  Our table for eight included 4 Australians and an American couple who had emigrated from Germany about 50 years ago.  We took a particular liking to the woman seated next to me, an Australian with bright blue hair in front of her head who was travelling with her father, who was not at dinner because he was feeling ill.  In the middle of the night the Captain woke us all up with the announcement that one of the passengers was about to be evacuated by Coast Guard helicopter, and requested that people not take flash pictures.  We heard later it was quite a moment; since there was no place on the ship for a helicopter to land they hovered over the ship and removed the passengers by rope lift (we didn’t see it from our room).  As we feared when we heard the announcement, the evacuees were the woman at our table with the blue hair and her father.  We have since heard that he is still in a hospital in Nassau with a bleeding ulcer.  Pretty lousy to fly all the way from Australia for a 2 month cruise, only to be evacuated with a serious health problem just a few hours after sailing!  I hope they had trip insurance; it would be a lot of money to lose.

Our second day at sea was Mary’s birthday, so I took her out to dinner at the Pinnacle, the gourmet restaurant on board (for which they charge an additional fee).  The food was first class; Mary had the large filet & I had the 22 oz. Porterhouse steak (oink!).  We had terrific crab cakes for an appetizer, Mary had chocolate soufle for dessert & I had a Volcano cake (which is made in a covered bowl).  Since it was only the second day at sea, there were no other passengers in the Pinnacle while we were eating; only two other tables were occupied, one by the Captain & his party and the other by Firmin the Hotel Manager (who was supposed to be retiring when we left the Prinsendam last year, but is somehow still here).  The staff had too little to do, so someone would come up to the table about every two minutes to inquire how our dinner was. 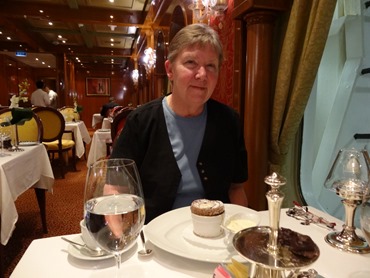 I will close this entry (finally!) with some random views around the ship, and then the first of the bread animals & towel animals produced by the artisans among the ship’s crew.  Hopefully the next dispatch will be filled with pictures of Madeira. 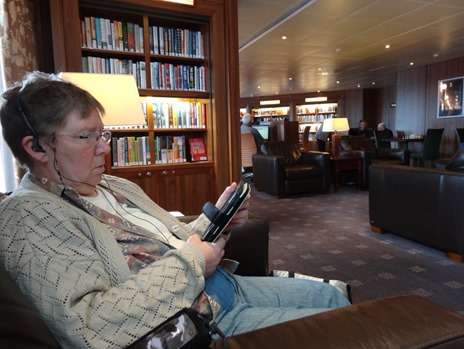 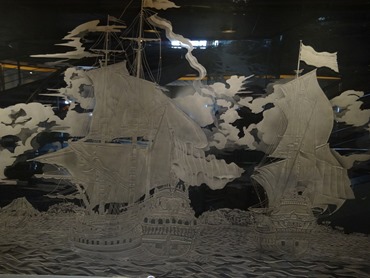 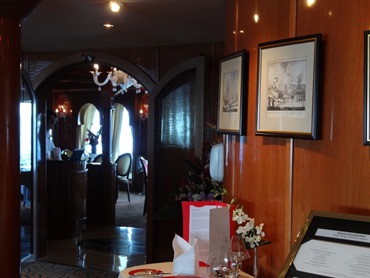 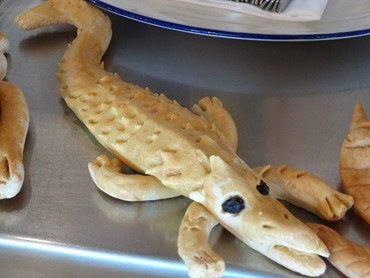 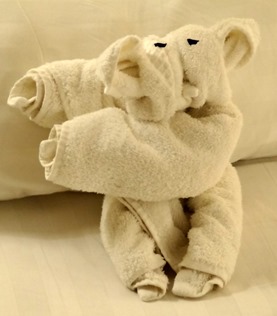 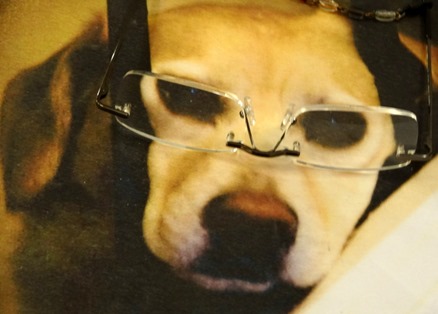 This entry was posted on March 22, 2013 by Rick. It was filed under Mediterranean cruise .