We left Ft. Lauderdale in the late afternoon of March 22 to the accompaniment of a faint rainbow (so faint I didn’t notice it until I looked closely at the picture). After two days at sea (during which our only towel animal appeared) we arrived in Oranjestad, Aruba on the morning of March 25.

Originally inhabited by the Arawak people, the “ABC” islands of Aruba, Bonaire & Curacao just off the coast of Venezuela were taken from Spain by the Dutch in the early 17th Century.  We visited the first & third of these islands, which currently have autonomous status under the Dutch monarchy. Since most of the islands visited on this cruise were new to us we opted to explore most of the ports ourselves on foot. So after breakfast we set out through the town, noticing its strong Dutch influence. Our first long stop was at the Archeological Museum, housed in a block of renovated houses originally built in the 1920’s.  It had a wealth of displays about the early inhabitants of the island, all clearly explained in English and Papiamento, the local creole language. The Arawaks came here from Venezuela (only 20 miles away) long before the Spanish arrived in 1499. Finding nothing they valued here (oops . . . gold was discovered in the 19th Century) the Spanish called these 3 islands “the Useless Islands,” and removed much of Aruba’s native population to slavery on Hispaniola. Many of the survivors returned later and today a large majority of the population can trace much of their heritage to the Arawaks (although there are no pure Arawaks left). One interesting display was of a couple of amulets of the “Bat Cult” that was widespread here and from northeastern South America through Mexico. 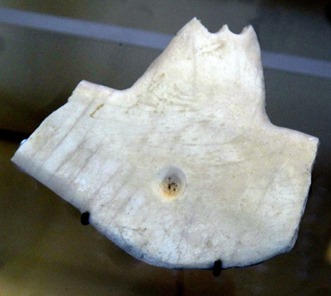 We walked by Fort Zoutman. Built in 1798, it is the oldest building on the island. In front is the Willem III Tower, added in 1868. It has a clock (which does not keep accurate time) and originally served as a lighthouse at a time when the shore ran next to the fort.  Nearby was a small waterside park with a statue of a prominent Aruban (there are a lot of statues here) & palm trees wrapped in the flag of Aruba.

We set out to find the library. Mary had a map of where it was supposed to be, but we couldn’t find it (we found out later that some of her library maps were pretty worthless). But the search took us through some interesting park filled neighborhoods we would not have seen otherwise, past the Beth Israel Synagogue (built in 1962 for a congregation founded in the 1920’s, it is the only one on Aruba) and a monument to Simon Bolivar. 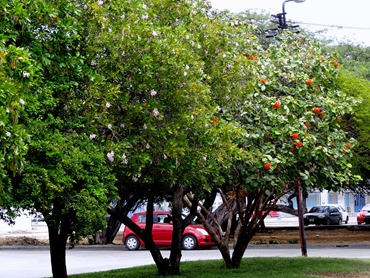 After giving up on the library we walked down along the seashore, which was lined with low, gnarled trees. I think these are Divi trees, which always lean sharply to the west because of the prevailing winds. 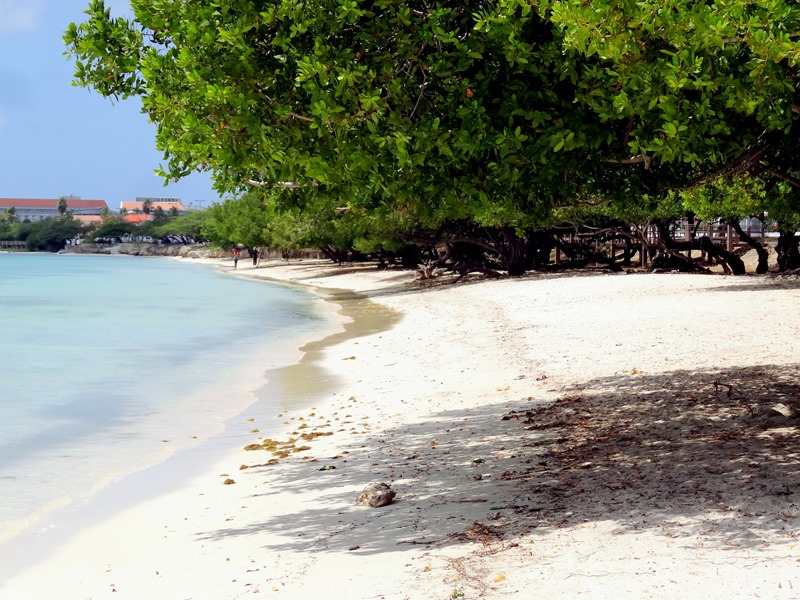 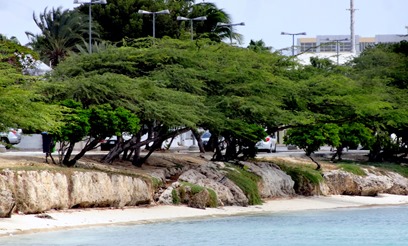 We had lunch at a lovely open air restaurant on the beach, complete with local Aruban beer.  It sure tasted good after all that walking in the warm weather. 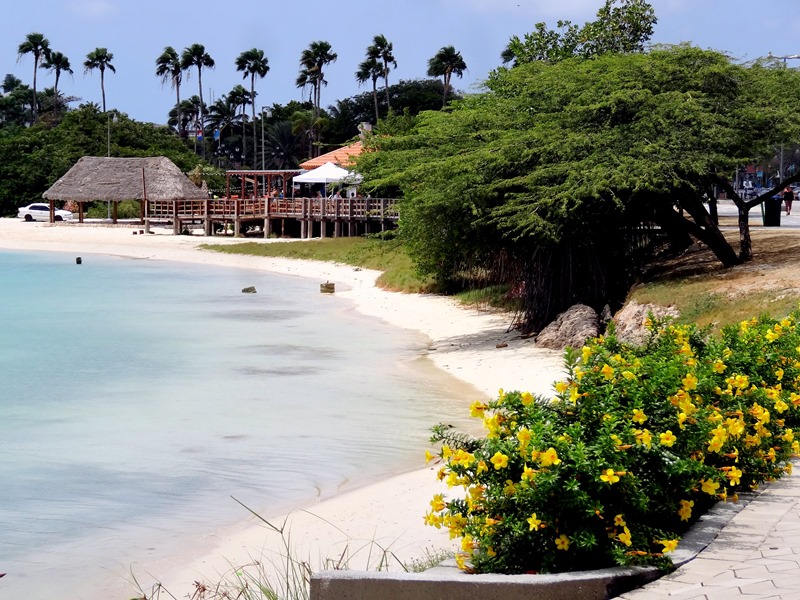 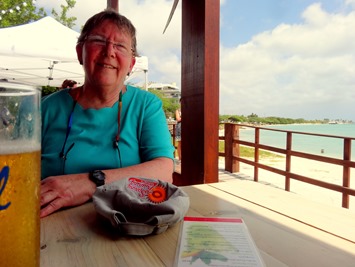 After a late lunch we headed back toward the port. We walked through Queen Wilhelmina Park, named for the Dutch Queen at the turn of the 20th Century. There is (of course) a statue of the Queen and also a number of iguanas.  We actually saw a lot of iguanas on our walk through this lovely town. Near the dock was a pelican sitting on a rock posing for pictures, not to be outdone by an iguana posing on the next rock. On the way back we saw a hungry iguana with a big smile, the largest iguana we have seen! 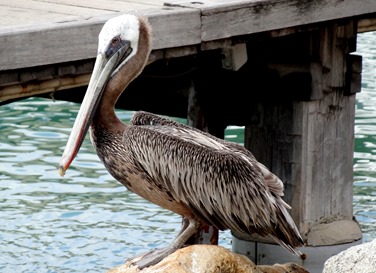 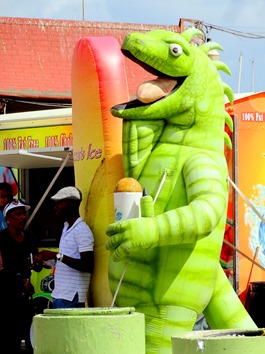 We arrived at colorful Willemstad, Curacao, on the morning of Wednesday, March 26. This is another Dutch island & capital of the Netherlands Antilles (I think). Willemstad is divided in two parts by the harbor: Punda (“point side”) on the right &  Otrobanda (“the other side”) on the left.  We docked in Otrobanda.

After breakfast we set out, walking across the Queen Emma Bridge, built in 1888, to the main part of town.  This is a pontoon bridge that can swing back & forth to let water traffic in and out of the harbor. It is known locally as the “Swinging old Lady” (sounds like it might be a Duke Ellington number). Over the top are wire loops with light bulbs that must be lit up at night. 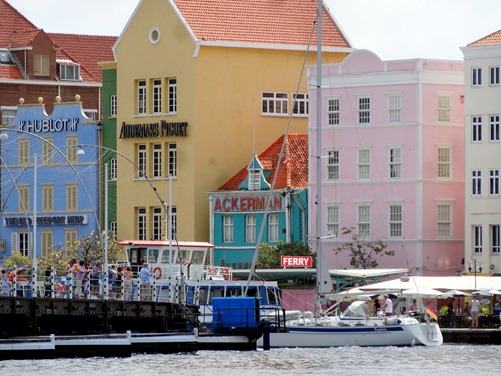 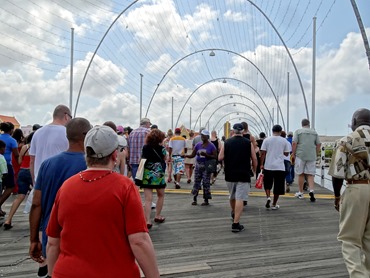 Plenty of nice views here, but once again the Eclipse towers over the town & there was also an oil platform spoiling the view past the point in Punda. 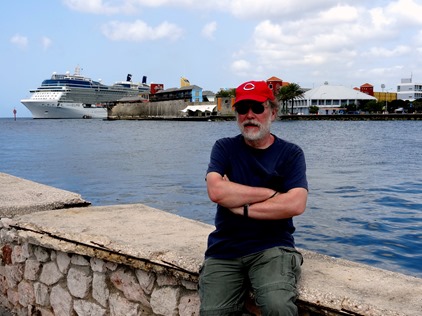 A little further inland we came to the floating market.  The market doesn’t really float, but the goods are brought in boats that are all tied up just behind the market stalls.  Mostly food & tourist knick knacks for sale here. There was also an interesting little bridge, the middle part of which lifts up to permit boats to go underneath. 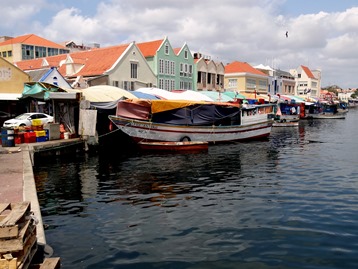 So we set out on what turned out to be a pretty long walk on a hot & muggy day to find the library.  Unlike the day before, however, we were rewarded for our efforts with a visit to a nice, if unspectacular, public library: the Biblioteka Nashonal Korsou (national library of Curacao in the local Papiamentu tongue). 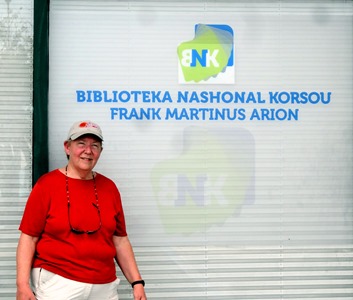 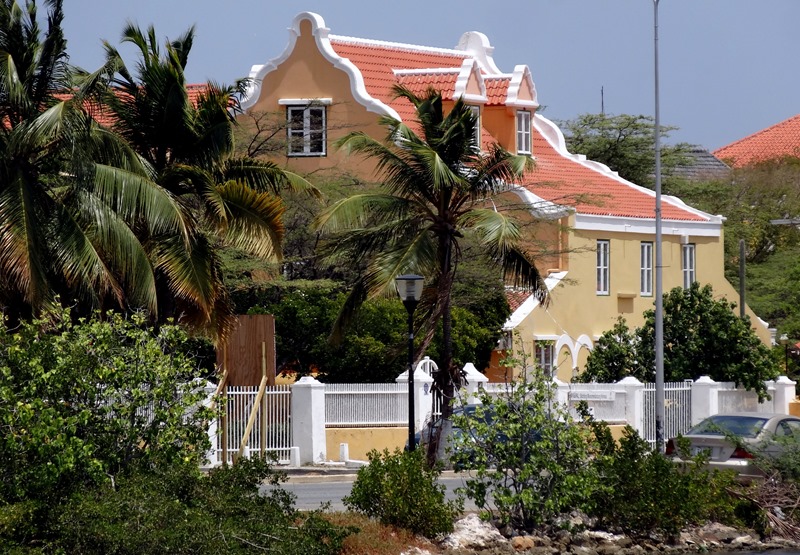 The last site on our list to see was the Mikve’ Israel Emmanuel Synagogue.  Built in 1730, it is said to be the oldest continually operating synagogue in the Western hemisphere.  At the time it was built the Jewish community, founded by Sephardic Jews fleeing Spain and Portugal in the 17th century, represented 50% of the white population of Curaçao. 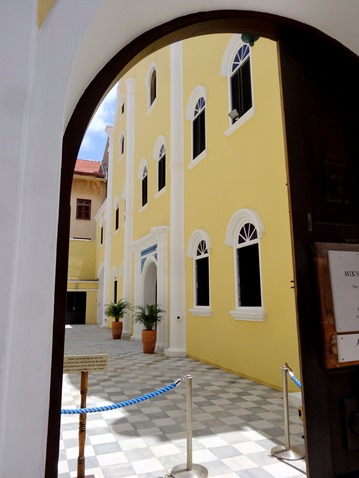 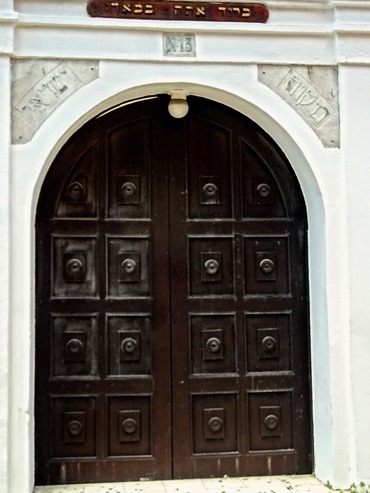 After that we had lunch in a nice restaurant extending out over the water of the large inlet in front of the library.  We ordered the local beer, but upon examining the bottle found out that it was bottled in Florida!  It was still very good. 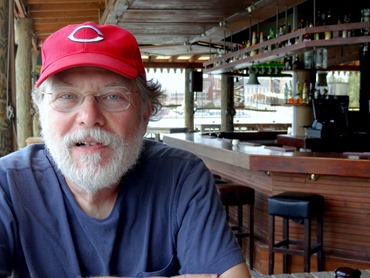 So that was pretty much it for beautiful Willemstadt.  We did spend some time in a museum & we tried but failed to enter the fort, which was closed for a conference.  Really, just walking around this city would make a nice day, even without visiting any sites. It is one of the most interesting & distinctive cities we have visited in the Caribbean. So we walked back to the ship & had some ice cream & looked forward to a sea day with no walking involved!