At Sea on Amsterdam, Part 1

We sailed from Ft Lauderdale at about 11:00 PM on January 5, as advertised.  You will see no pictures of that because we were in bed.  Since it was dark out there probably wouldn’t have been any pictures even if we had been on deck.  We had three full sea days before reaching our first port, Puerto Limon in Costa Rica. So we explored the ship, which was new to us, and settled in to life on board.  We have been very impressed with everything about this ship so far – the ambience, the friendly & helpful staff, the management, the really excellent food and much more.  On our last cruise on a different ship much of this was decidedly less satisfactory, so we have come to the conclusion that Holland America (“HAL”) saves its best for the Grand Voyages, its longest cruises.  The difference is quite noticeable.  So welcome aboard!

Here are some of the ship highlights, beginning with our cabin.  We chose this cabin because of its location, near the center of the ship (more stable in high seas), with an unobstructed window, on Deck 3, the Lower Promenade deck, which is the one with an outside deck going all the way around the ship.  We are right next to a hallway opening onto the deck on both sides of the ship, & a stairway (and elevators, which we rarely use) leading to all the other decks.

Deck 8 is the Lido deck, which houses the buffet restaurant, the swimming pool & a large open air aft deck (meaning in the back of the ship for you landlubbers), which is a great place to be when we sail away from ports.  There is a bar & a hamburger grill (the “Dive In”) by the pool, which has a retractable roof so it can be used during bad weather.  With tables & lounge chairs it is a nice place to eat or read.  There is also a stage that sometimes houses entertainment. 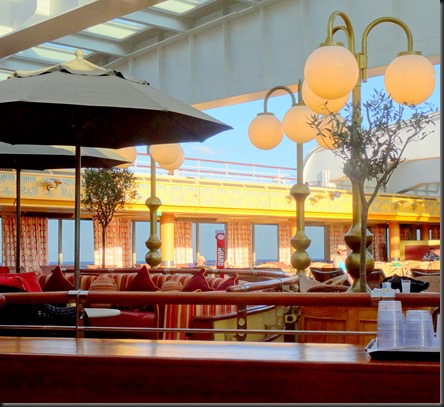 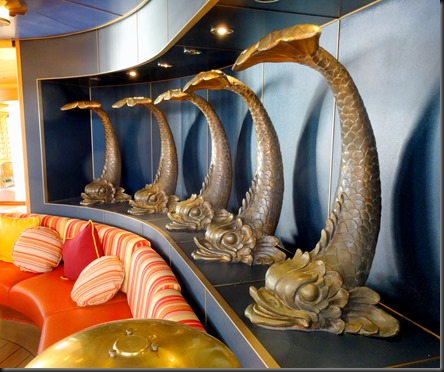 The “Queen’s Lounge” is the main entertainment state.  In addition to performers, there are lectures here during the day, along with presentations about the places we are visiting & a variety of other activities.  The seating here is more comfortable than on the other Holland America ships we have experienced and it’s decoration is pretty over-the-top, with huge caryatids holding up the wall sconces.  The 5 piece Amsterdam Orchestra accompanies all entertainers, playing very diverse musical styles with little preparation, and they seem to be quite good.  So far we have seen a song & dance show by the resident singers & dancers, a singer with 2 platinum records we had not heard of, & the Finkel family.  The latter put on an excellent show: 93 year old Fyvish Finkel (who you may have seen on Boston Public or Picket Fences) sang & told jokes while the music centered on his virtuoso grey-haired sons Elliott (piano) & Ian (xylophone). 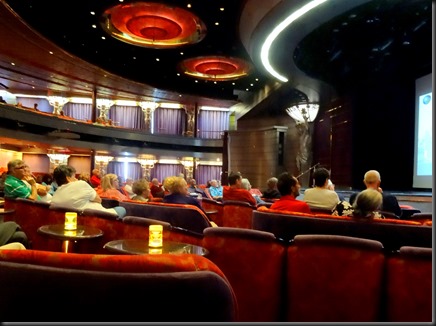 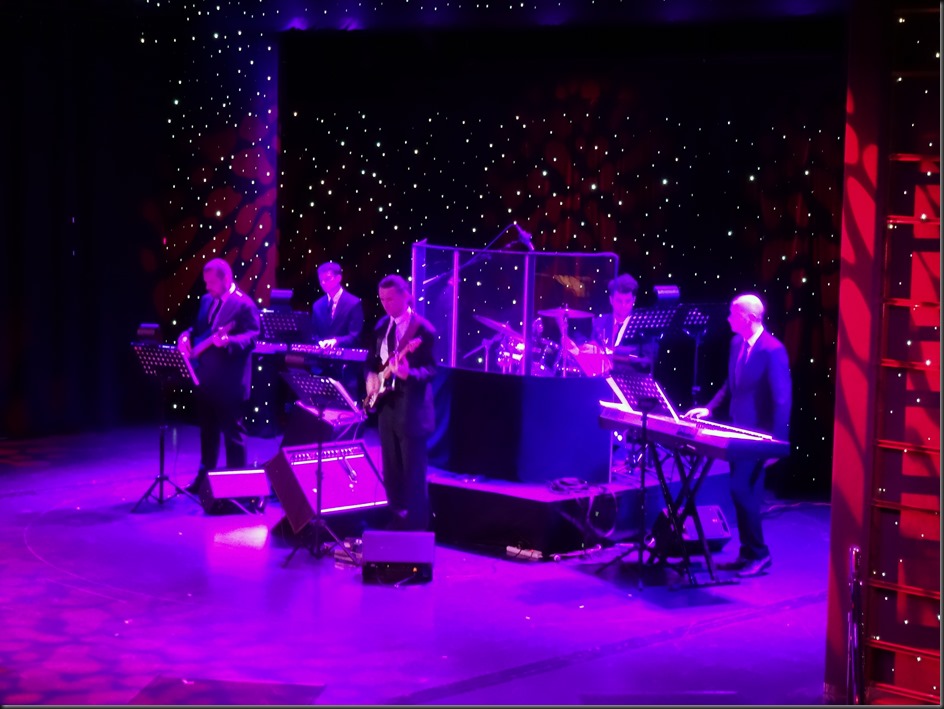 There is a wide variety of artwork throughout the ship.  Just around the corner from our cabin, next to the stairs, is a 19th century “Bust Of A Roman Woman,” whom we call Livia (if you have seen or read “I Claudius,” you know who we are talking about).  There are a number of paintings of old Holland America ships on the stairway landings, and other works of art too numerous to mention.  So this is just a tiny sample: 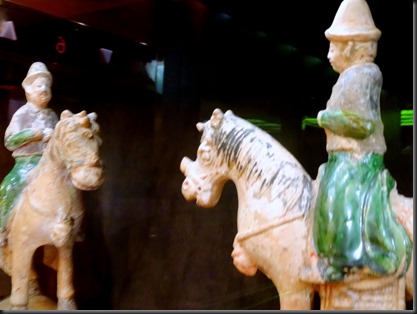 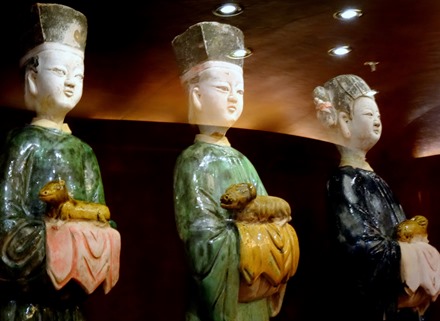 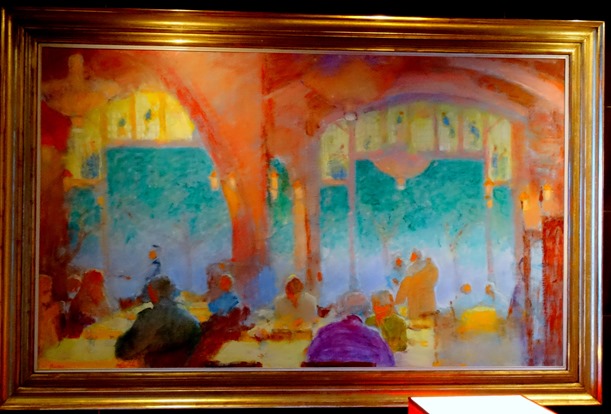 Perhaps the most distinctive artwork on the ship, however, is the Planeto Astrolabium,” a fascinating contraption filling the the three story Atrium in the center of the ship.  It doesn’t have a regular clock face, but it has so many other things: an astrolabe on one side (showing the current star positions), a planetarium showing (presumably) the positions of the planets, a mechanical earth & moon orbiting a sun at the top, and a white face with the names of all the world’s major cities that rotates to show the current time in each (at least it does that when it is working, which it isn’t so far on this cruise).  We have seen it chime a few times, when all the gears in the top & in the floor rotate to pull strings that ring a set of bells at the top of the lowest stage of the gizmo.  No one can miss this amazing creation since it is so big & situated where everyone passes by. 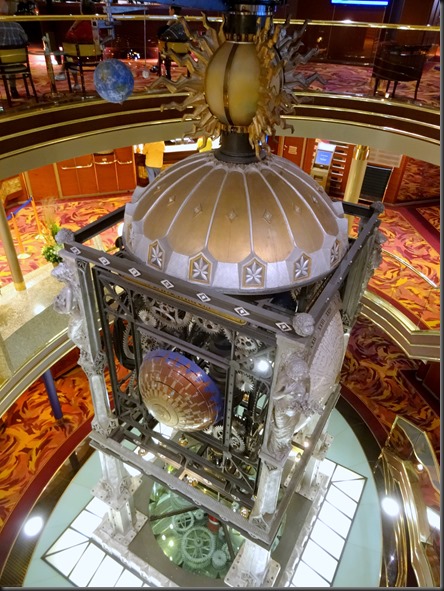 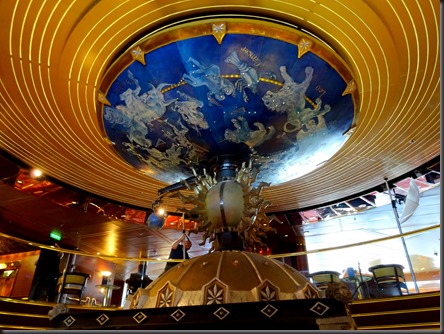 Well, this episode has already gotten pretty long and there is a lot yet to show you, so I will stop here & continue in a second posting.

This entry was posted on January 31, 2016 by Rick. It was filed under Around The World .