March 20 found us in Sri Lanka.  When we visited here in 2016 we walked some 13 miles round this town, quite exhausting in the heat & humidity.  We saw a lot, which you can see here:

This is the last episode with a reference back to 2016; all the ports from here on out are new to us (except San Juan, Puerto Rico, which we visited many years ago).

So this time we decided to sign up for an all day HAL excursion that said it would take us to see Galle, a city on the southwest corner of Sri Lanka with a very long history as a major stop on the east-west trade routes.  This turned out to be a somewhat dishonest description, but more about that later.

Galle has been important to sea trade since at least Biblical times, when it is thought to have been Solomon’s source for gold, ivory and other exotic things, referred to as Tarshish in the Bible.  It was important enough to be included in Ptolemy’s world map of 125-150 AD. The Portuguese came in 1589 and it was captured in 1640 by the Dutch, who fortified the entire town.  The British gained control in 1796 and held it, along with the rest of what they called Ceylon, until independence after World War II.

As we left the ship there was a very polished Sri Lankan dance company performing. 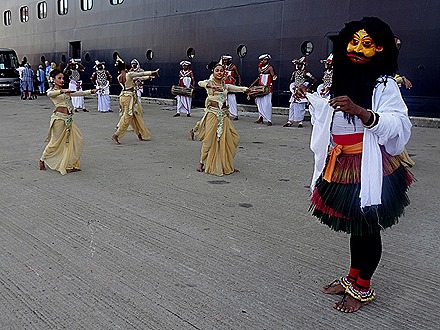 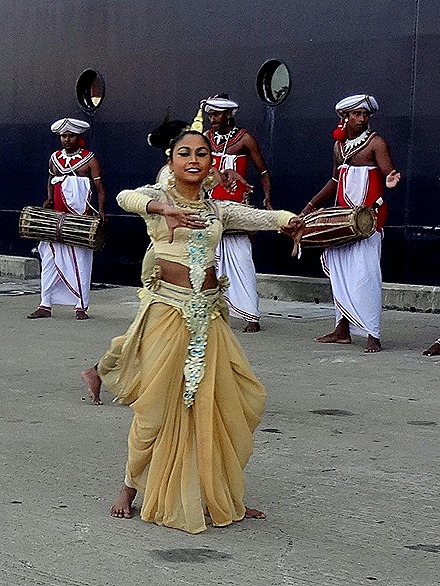 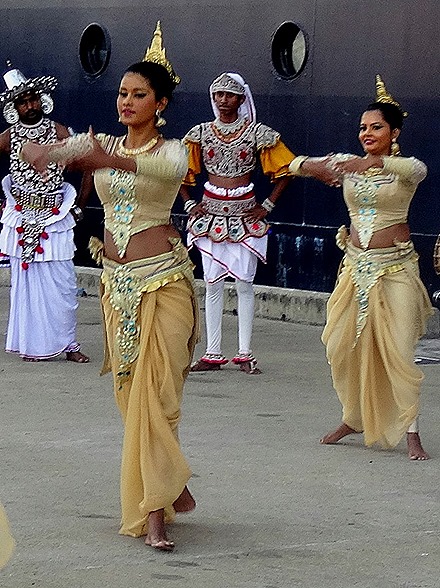 We headed out of town through some rather impoverished areas, then south on a highway.  Our first stop was at the Handunugoda tea plantation.  Sri Lanka, of course, was called Ceylon when it was a British colony & Ceylon tea has been famous for quite a long time.  Among other things, this is the only plantation in the world that makes what is called “White Tea,” which is never touched by humans before it is consumed.  The owner of the plantation told us that this originated as a drink only for the Chinese Emperor & the story goes that it was tended & picked by virgins & the first human flesh it touched was the Emperor’s lips.  Today it is quite expensive and the plantation sells the white tea exclusively to a restaurant in France.  The plantation’s tea factory uses equipment that is more than 140 years old. 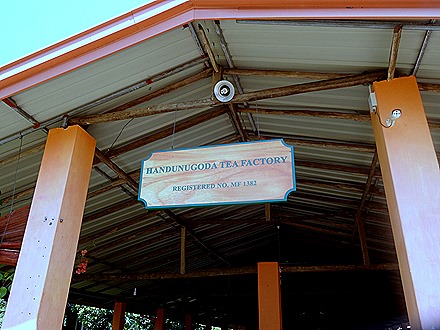 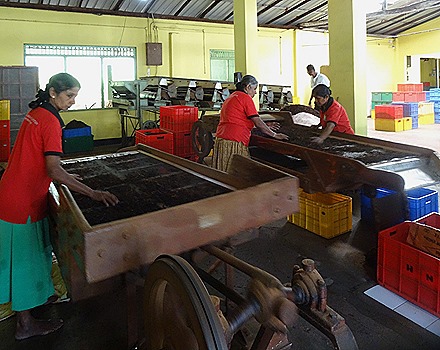 After spending time in the tea tasting room, where many kinds of tea grown here were for sale, we were taken upstairs to a kind of dining room where we were served tea and cakes.  We saw some interesting flora & fauna at the plantation, but were not taken to see the tea fields or the owner’s house as promised in the tour description. 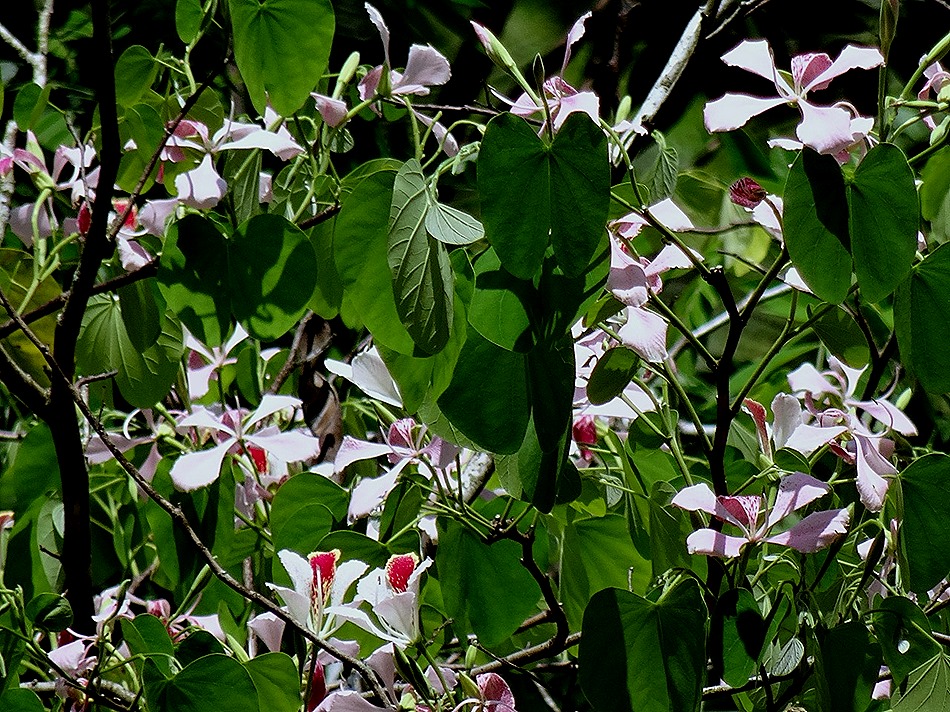 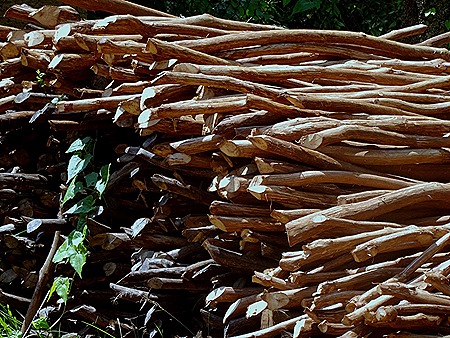 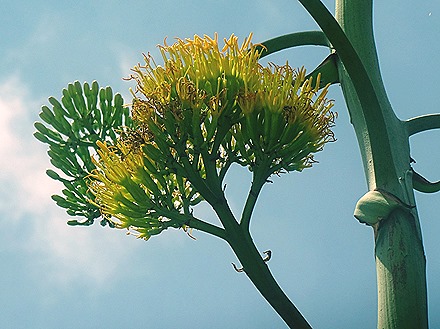 Our second stop was to see stilt fishermen.  This was once a serious way to make a living, unique (as far as we know) to Sri Lanka.  Today fish are caught by more modern methods & these guys are strictly employees, paid by the hour to sit out for tourists to photograph.

We drove on to the south, passing Galle, then stopped about half an hour later at a hotel where we had an excellent Sri Lankan lunch.  The hotel had a very dramatic staircase, lined with metal sculptures. 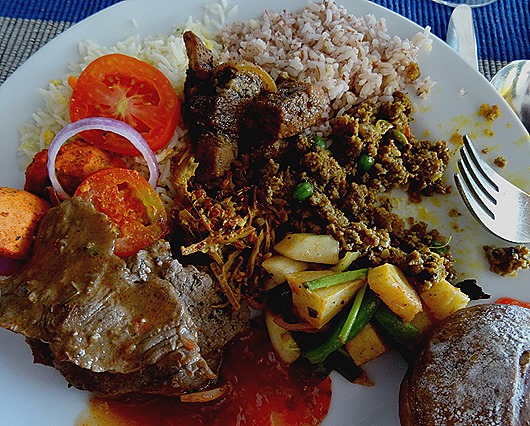 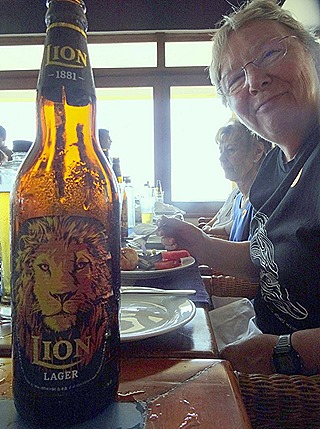 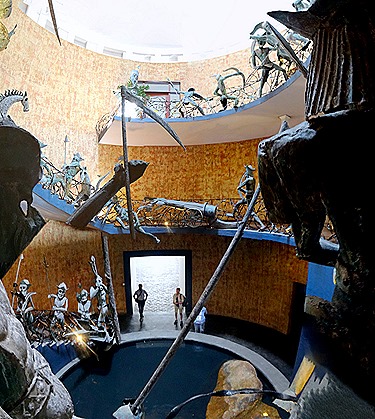 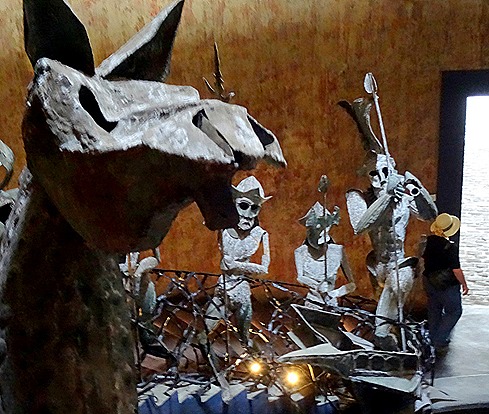 There was plenty of leisure time after the meal to walk around and take pictures.  We took a few pictures of Galle in the distance across the water.  But the unnecessarylength of the lunch stop would add to the problem with this excursion, as you will see.

We got back on the bus and finally headed for the headline destination for this excursion,  the only reason we decided to purchase it (it wasn’t cheap).  After driving half an hour back we entered the Galle Fort, which is what the old city is called.  We parked in front of the library (yay!) & were told we all had to go into the Maritime Museum across the street, where we would have 10 minutes (!) to walk through it.  If we didn’t go into the museum, they said, we might not be able to find the bus.  And this 10 minutes was our ENTIRE stay in Galle!  No going up to the walls, exploring the famous old Dutch Church or “the narrow streets, old churches, cloistered courtyards and shuttered mansions,” as HAL’s excursion description promised. 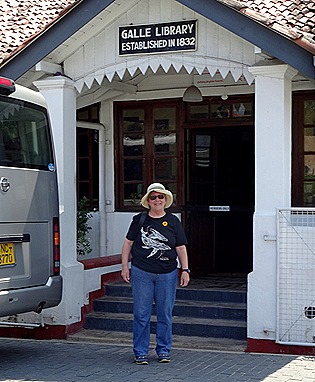 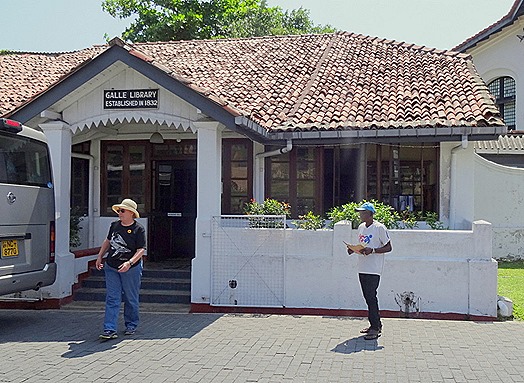 We hurried over and took some pictures of the library while others were exiting the bus, then we followed the group into the Maritime Museum.  The museum is housed in the Great Warehouse, built by the Dutch in 1669 to store spices.  It was moved to this location after the original museum was destroyed by the 2004 tsunami. As you can imagine, there could be no lingering to actually learn about the museum artifacts during a 10 minute run-through. 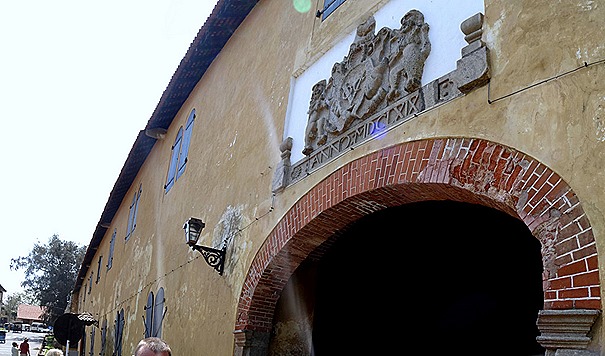 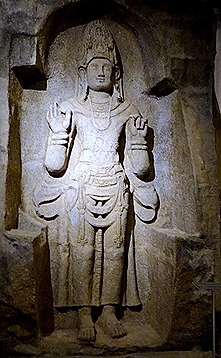 As we left the building to board the bus we saw a couple apparently having wedding pictures taken near the museum and also the Archaeological Regional Office of Sri Lanka across the street. 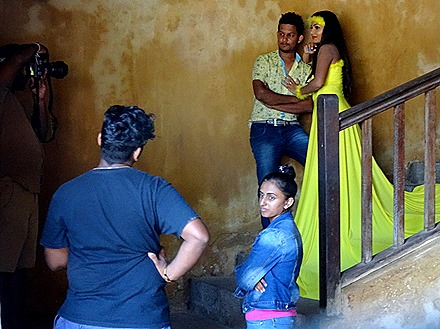 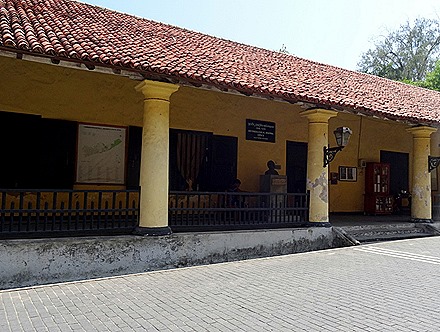 That was it.  The bus drove around the main street to the gate & we left the fort & headed back north to Colombo.  On the way we passed a Buddhist temple and a funeral, among other things, but our stay in Galle . . . the title and supposed central destination of this excursion . . . was a total of 10 minutes in a maritime museum.  That’s not what we came for and we never would have signed up for this long and expensive trip if we had known that only 10 minutes of a 7.5 hour excursion would be spent there. It certainly took a lot of gall to title this excursion a trip to Galle!  After complaining (we weren’t the only ones) we were given a 15% refund, but in our opinion that was pretty lame compensation for not only failing to provide what was promised but also using up our only day in Sri Lanka in the bargain.

Perhaps the best part of the visit was the sail away.  Its always good when you sail away from a large port at sun down and Colombo’s port is situated where you can see a number of landmarks from the ship as you go.  We saw the candy striped red and white mosque, the brand new lotus blossom tower that was scheduled to open the week after our visit & the huge stupa on stilts over one of the entrances to the port.  Then the sun set as we sailed past the last lighthouse & out to sea. 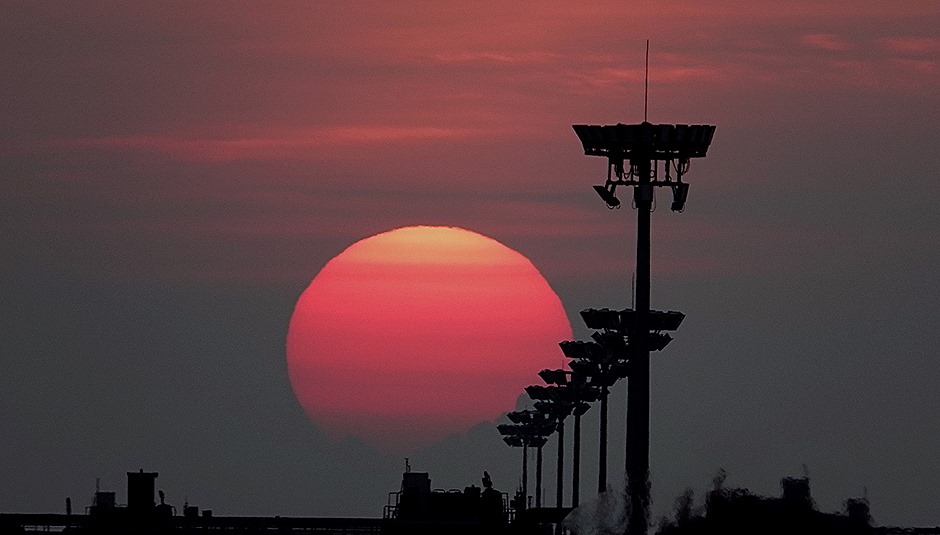 So after dinner we went to bed, having left our last repeat port until San Juan, Puerto Rico.  From here on in it’s all new to us, which certainly increases the sense of adventure. 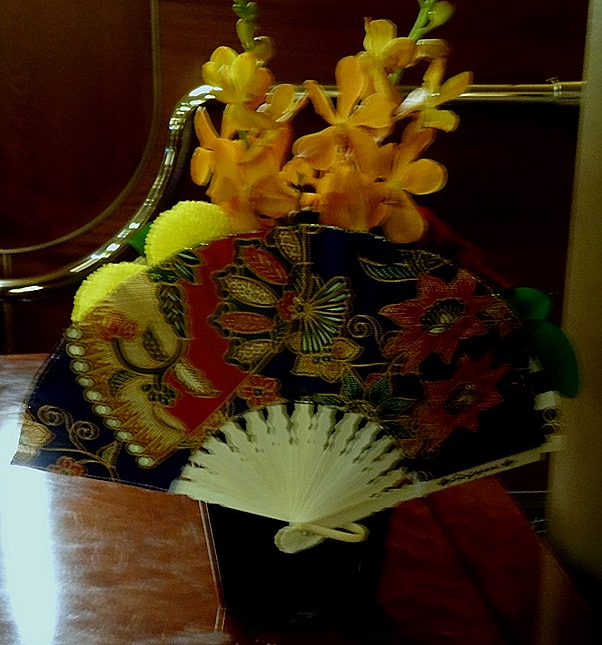