The morning of March 27 found us docked at La Possession, a commercial port on Reunion Island.  This was not on our original itinerary but when the Madagascar stop was cancelled because of an outbreak of plague(!) this island, about 300 miles to the east, was added.  Discovered in the early 16th century by the Portuguese, it has been French since the 1630’s.  It has a diverse ethnic mix, most of the non-Europeans having come as slaves or, after slavery was abolished in 1848, as indentured servants. Today it has a population of about 850,000 and is a department of France, with seven deputies & three Senators in the French legislature.

We spent the day on an excursion that circled the entire island.  Reunion has several large volcanoes at its center, but there were fairly low clouds all day so we couldn’t see them.  We started out to the north toward Saint-Denis, the capital & largest city of Reunion.  The highway runs between the sea and large cliffs that are held up by wire mesh because in the rainy season they are unstable.  A new highway is being built on risers over the water, which will presumably protect it from mudslides and storm surges.  We did not stop in Saint-Denis, driving by it on the highway, so all we have is a few pictures from the bus window. 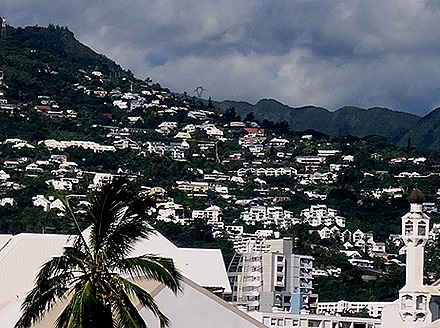 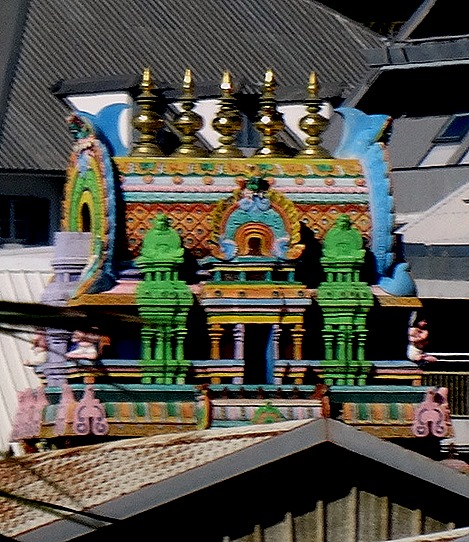 Our first stop was at an unusual church, Eglise de St Anne, which has a very elaborately decorated exterior.  We were told that it was built by Hindu craftsmen, from whom it got this decorative style.  The church also had a nice garden in front. 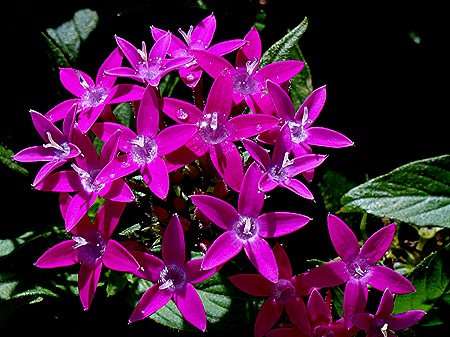 Reunion is a volcanic island and Piton de la Fournaise is still very active.  It last erupted in July, 2017.  We visited a large field of cooled lava from this volcano called Grand Brule.  It was not clear to us when this lava formed, but we think it was in 2007.  The lava goes all the way down to the ocean.  Unfortunately the low clouds prevented us from seeing up to the mountain itself. 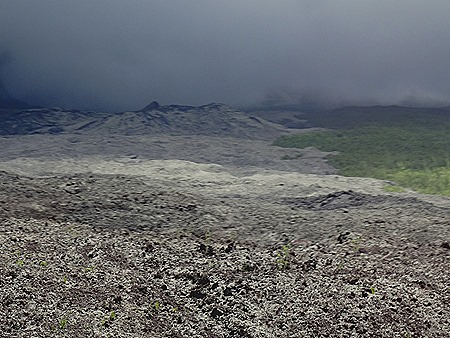 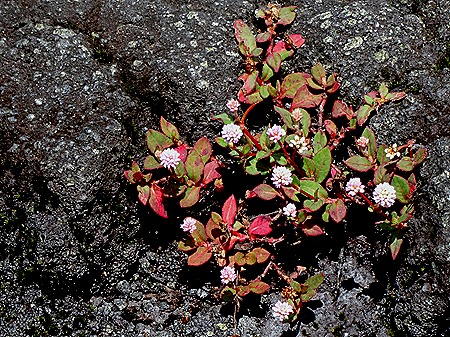 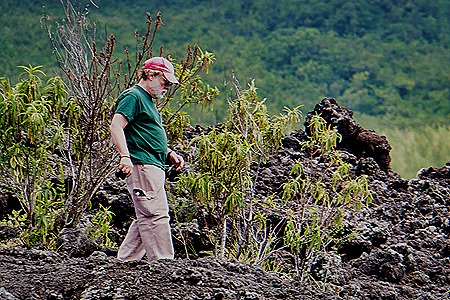 In Saint-Philippe we visited the Garden of Perfume & Spices, a botanical garden containing some 1500 types of flora, many of which produce perfume products & spices as the name suggests. We started out at a hut with a veranda (and a gift shop), then proceeded with a guide provided by the garden.  He speaks only French so our overall tour guide translated for us. 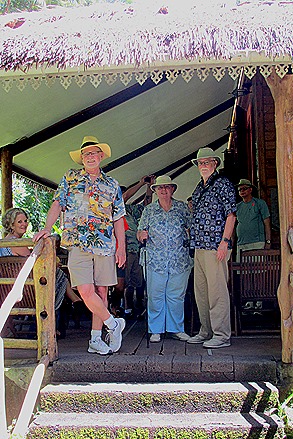 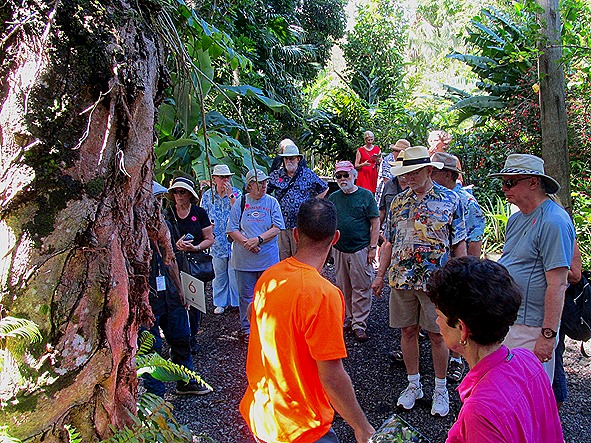 So fasten your seatbelts; we saw a lot of unusual flowers & plants. 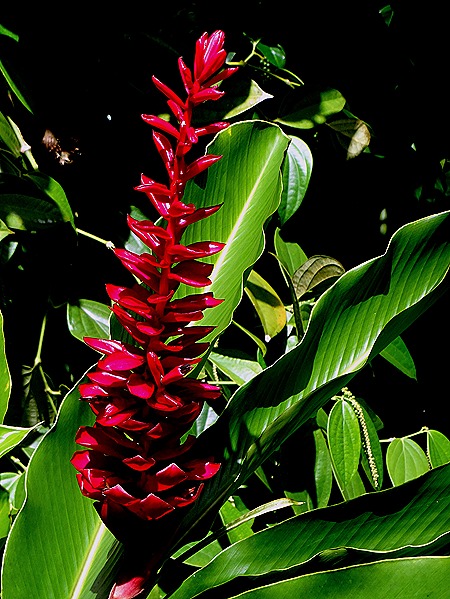 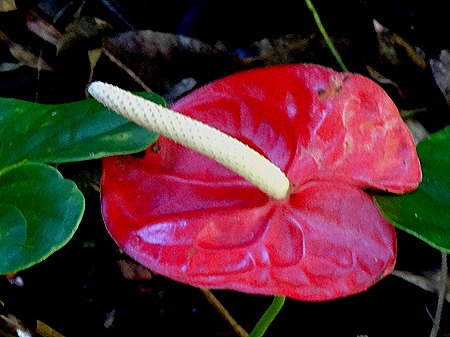 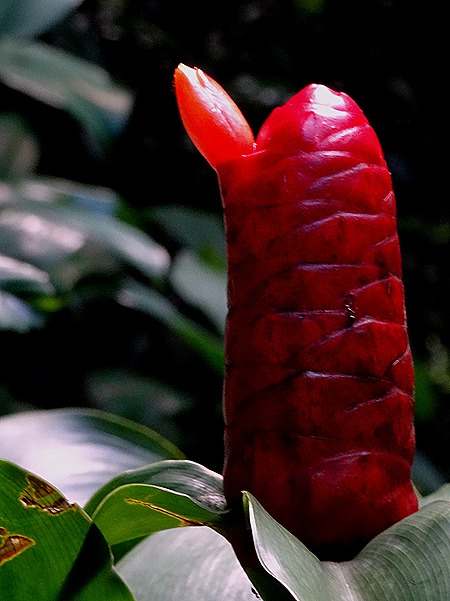 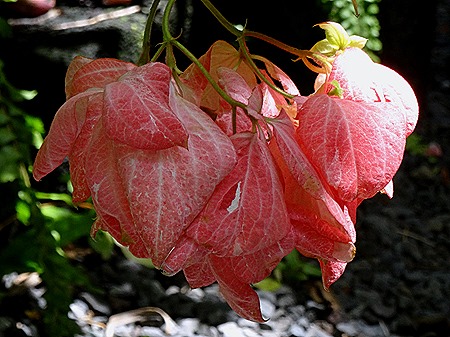 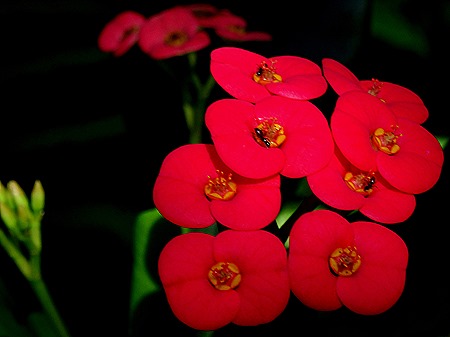 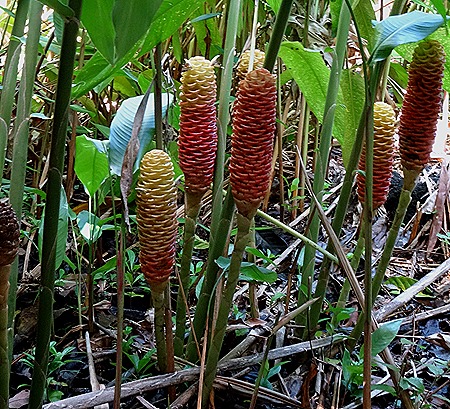 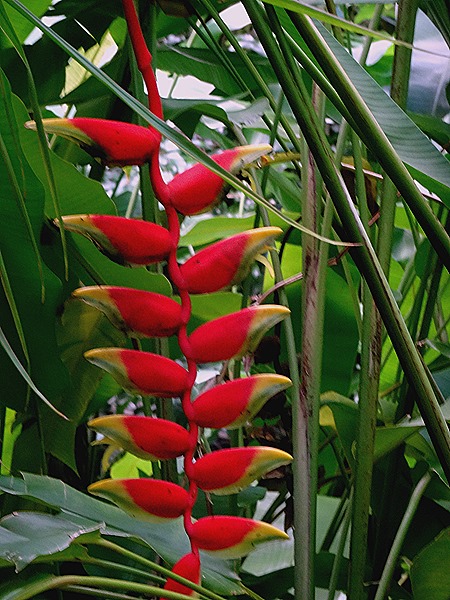 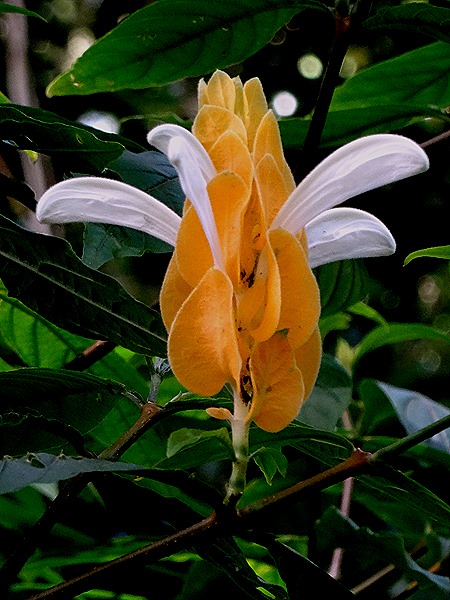 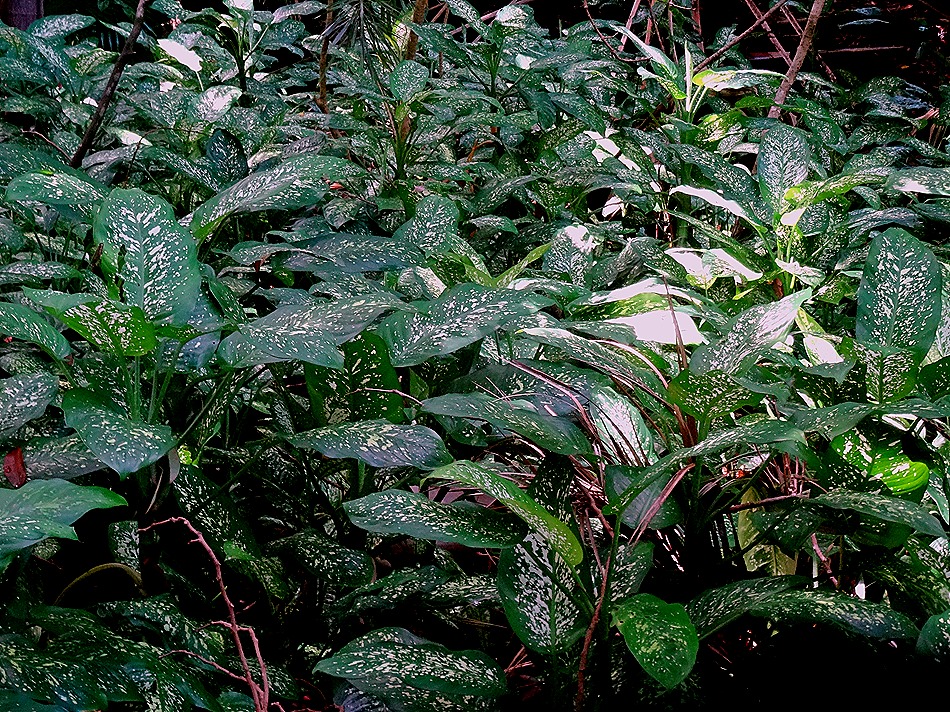 But we thought the most exotic flower was the one we were told was a called a Black Widow flower.  Google tells us, however, that it is a Black Bat Orchid.  Whatever its called (it looks more like a spider), it is quite spectacular. 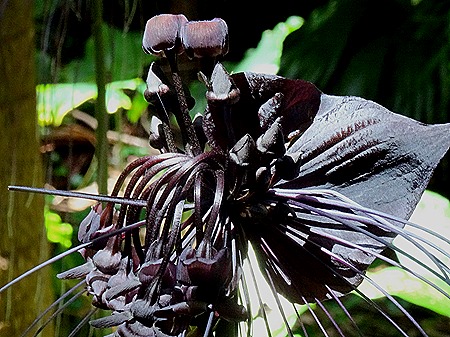 We had lunch in a restaurant at Cap Mechant (naughty cape).  The restaurant was just OK, but out back were some lava cliffs being pounded by surf from large ocean swells. 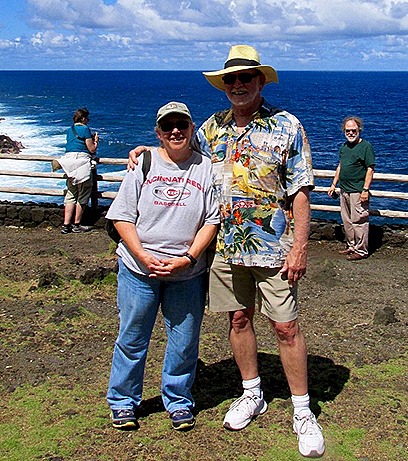 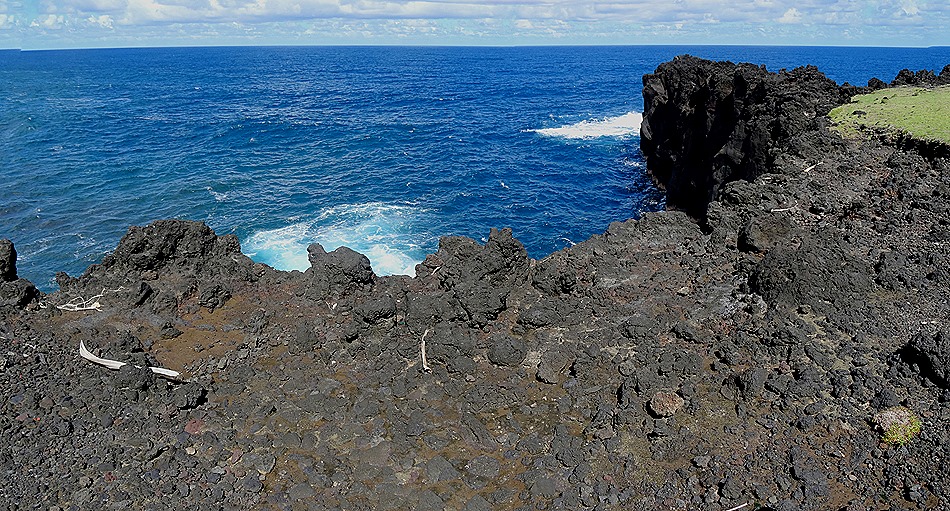 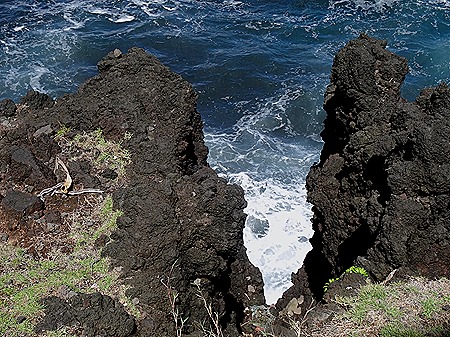 We headed for home up the western side of the island, but first stopped at a large beach.  Swimming is not allowed here, or in many of the other beaches on this side of the island, because of a rash of shark attacks over the last decade or so.  But we weren’t planning to swim anyway & this beach was a nice area to relax, with large palm trees lining it. 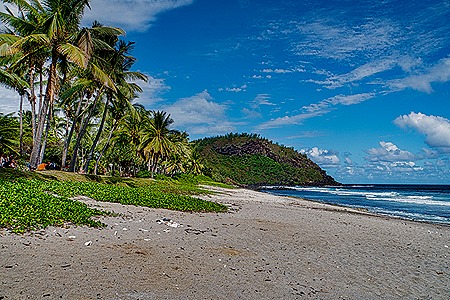 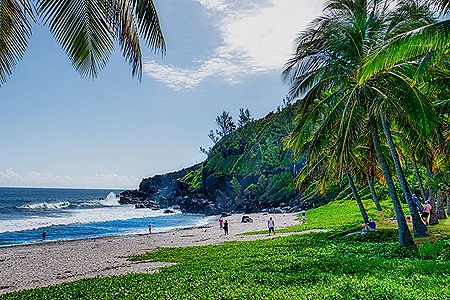 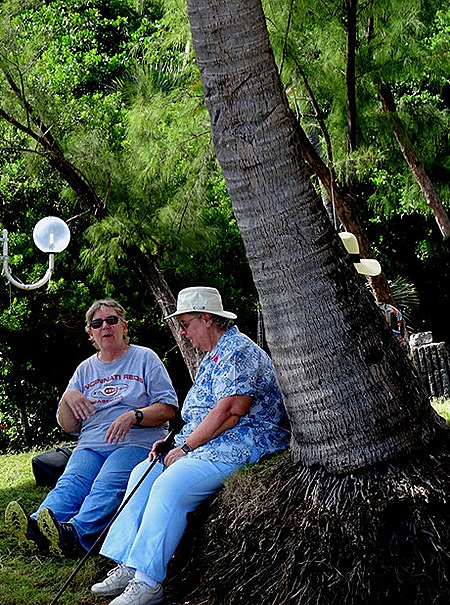 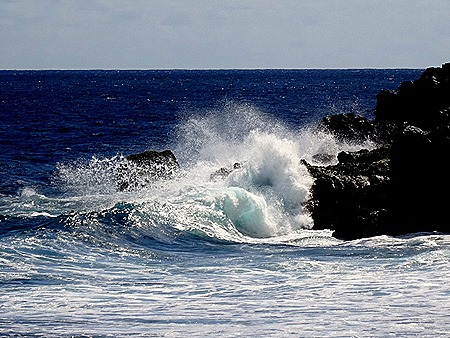 Every year the CEO’s of Holland America & its parent, Carnival Corporation, come aboard the ship during the grand world voyage for about a week.  This year they boarded in Reunion Island & so there was a big sail away party by the Lido pool, complete with band & free flowing alcohol.  Of course the Lido pool is inside (with a roof that opens) so you couldn’t actually watch the sail away (and it was a beautiful evening), but not many passengers seemed to be sober enough to enjoy it anyway.  We would have to say, however, that the party was a success. 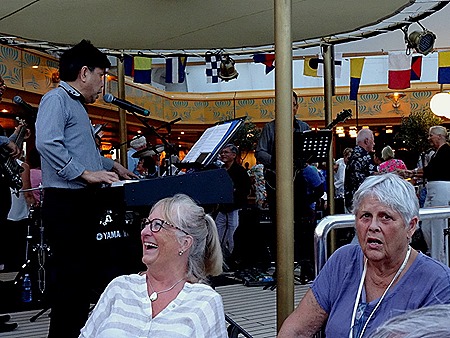 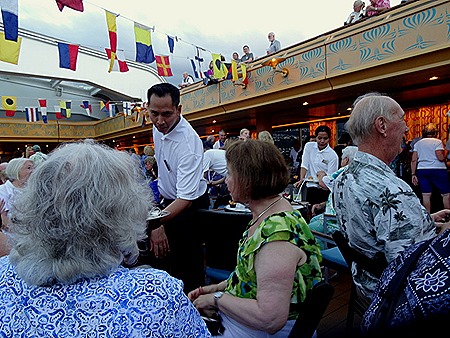 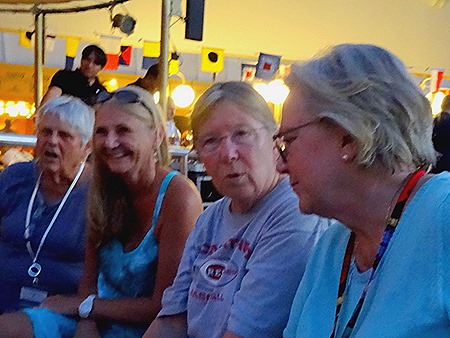 After the party & dinner in the main dining room (which had been largely empty at the early seating because of the party) we went to bed.  Next stop, the continent of Africa.

This entry was posted on August 10, 2018 by Rick. It was filed under Around The World Again .