We spent January 19 in Iquique, our first port in Chile.  We were a little sleepy when we pulled the curtains back to see the city because when we crossed into Chile we lost not just one hour but two, all at once. We assume that this change was mostly a political difference between the two countries, since Iquique isn’t really east of Matarani.

With a population of about 200,000, Iquique sits on a narrow flat area tightly bound by 2500 foot mountains on one side and the ocean on the other.  The mountains are mostly sand, this being a desert.

The population here never exceeded 100 before the 19th century.  Iquique was part of Peru until the Pacific War of 1878-1883, fought among Bolivia, Peru & Chile.  When the smoke cleared Iquique was part of Chile.  Its growth was fueled by the nitrate boom of the late 19th & early 20th century, when Iquique was one of the wealthiest cities in Chile.  That ended with the development of synthetic nitrates and the city suffered a decline.

HAL’s shuttle bus took us to the Plaza de Armas, which in this city is called the Plaza Prat.  In the middle of the square is the Torre Reloj, an 82 foot tall white clock tower built in 1877 by the city’s English community.  It is white & looks like stone from a distance but is actually made of wood, specifically Oregon pine.  This apparently was the building material of choice for the nitrate barons of the late 19th century. 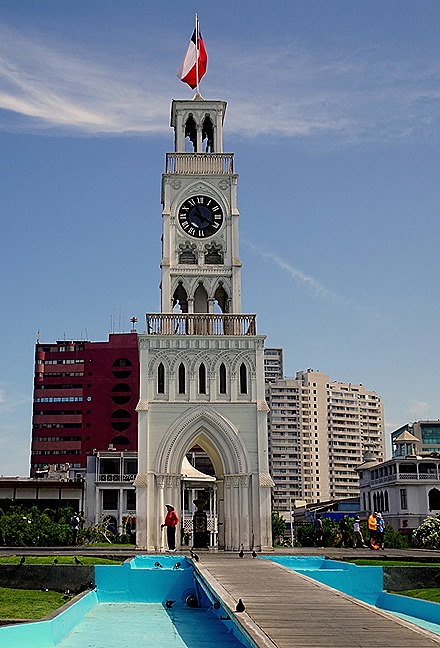 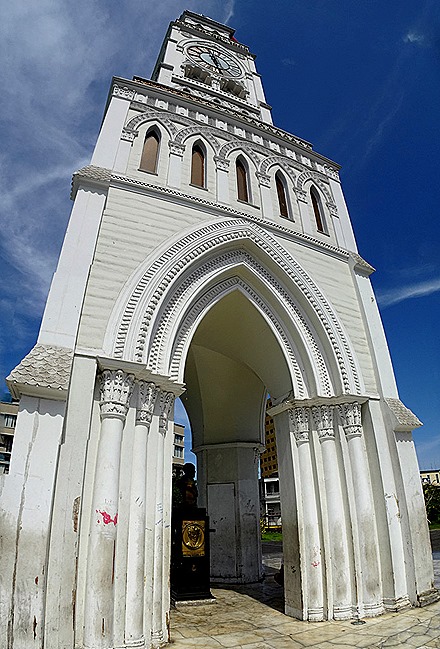 In the center of the clock tower is a bust of Arturo Pratt, for whom the plaza is named.   Arturo Pratt appears to be one of Chile’s greatest heroes.  During the Battle of Iquique in the Pacific War Pratt commanded a ship called the Esmeralda.  He refused to retreat during the battle & his ship was sunk by the Peruvians, with Pratt and most of his men perishing.  He is honored for being willing to sacrifice his life (not to mention all of his men) to defend Chile’s interests.  It is rarely mentioned that the Chilean interest involved was seizing a Peruvian city rather than defending his homeland, but nonetheless he is a great hero. 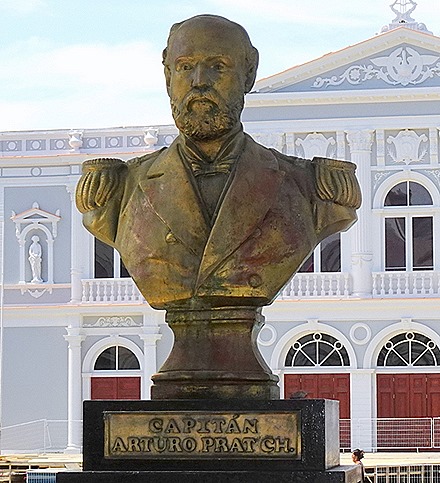 One thing we really wanted to see in Prat Plaza was the Teatro Municipal.  Another wooden building that looks like stone, the theater was built in 1890.  It is reputedly very interesting inside but we didn’t get a chance to find out because some kind of platform was under construction in front and it was closed to the public. 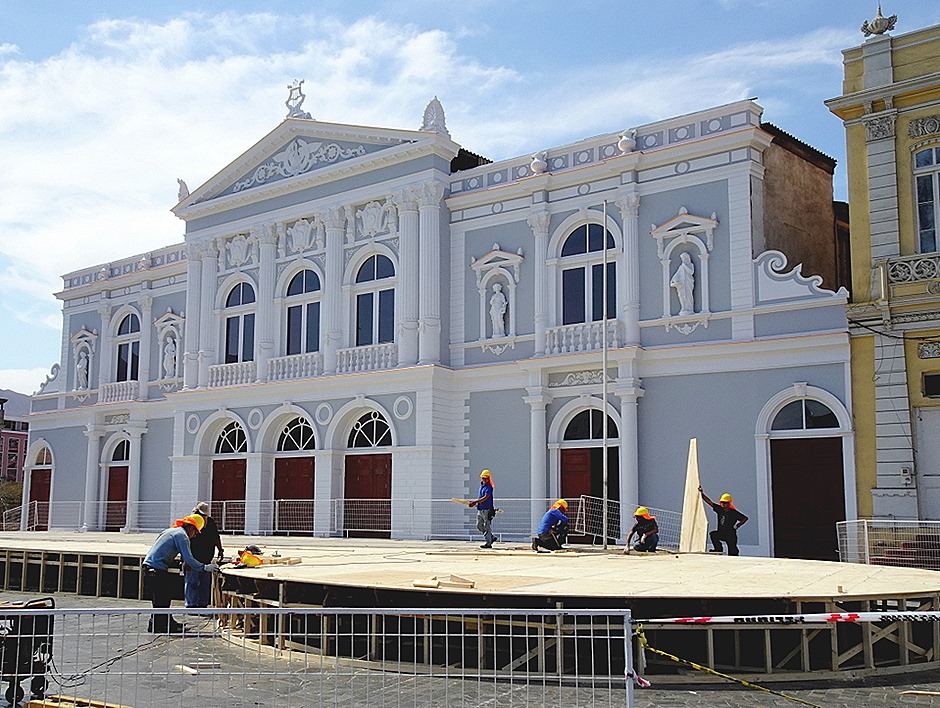 On the other end of the plaza is the Casino Espanol, built in 1904 by the city’s Spanish community.  It was closed in the morning but we were able to wander inside a bit in the afternoon before returning to the ship.  Its façade is in Moorish style and inside it is filled with Spanish tile and mirrors with columns and a series of 9 paintings of scenes from Don Quixote.  Today it is an opulent restaurant, where we gawked but did not eat. 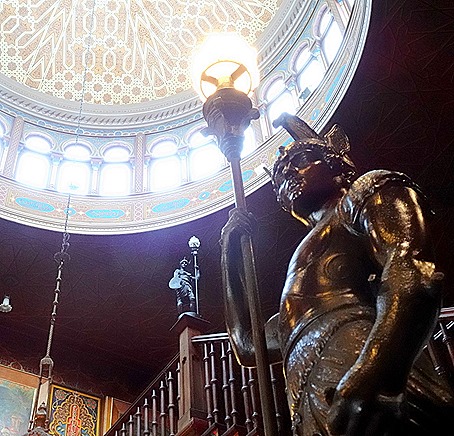 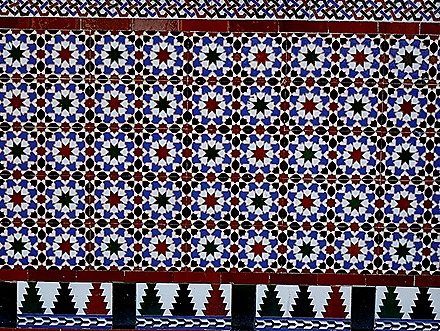 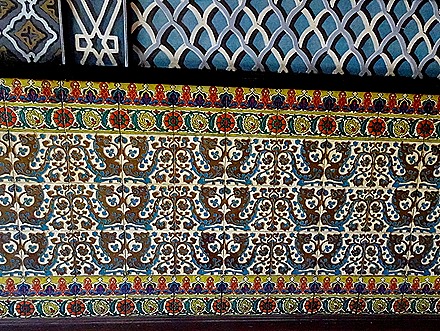 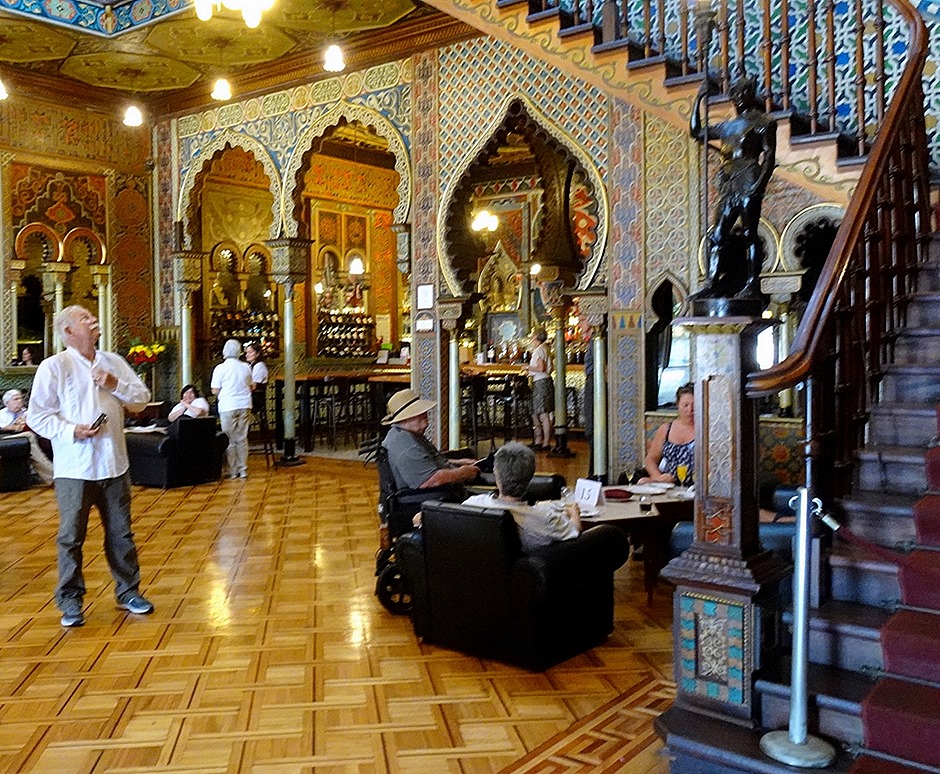 Leaving the plaza, we walked down Avenida Baquedano toward the sea shore.  We looked through a market that had nothing we wanted and then we found the library!  Unfortunately it was closed on Saturday (one might think this would be the best time for schoolchildren and working people to visit the library).  It was located on the tsunami evacuation route.  From the avenida we walked down you could see the sandy mountains looming over the city. 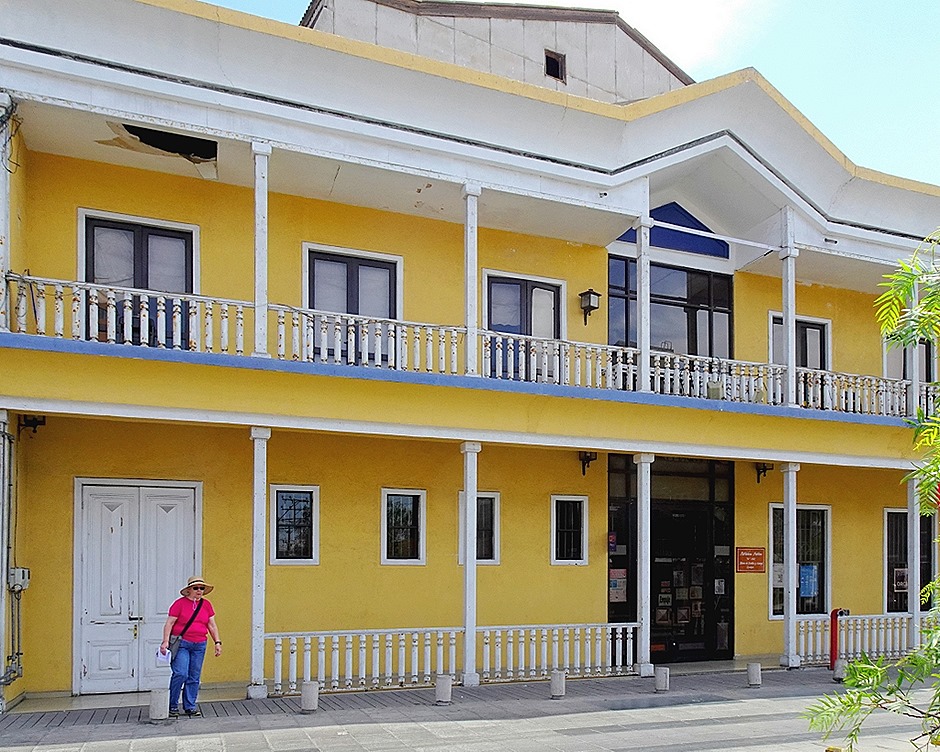 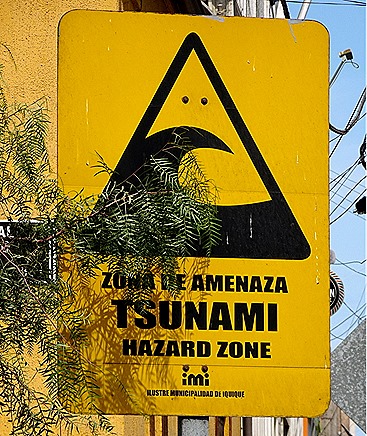 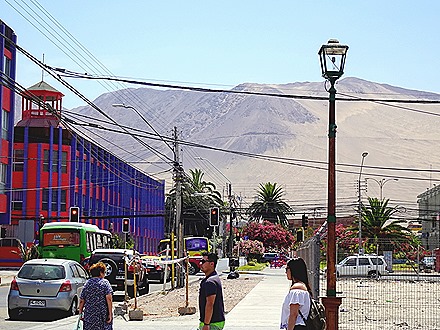 Avenida Baquedano is pedestrianized all the way from the plaza to the seashore, with palm trees down the middle and a streetcar that runs down tracks in the middle.  It is lined with old mansions built of Oregon pine by the nitrate barons in the late 19th and early 20th century, many of which have been restored and painted bright colors.  We stopped in one called the Palacio Astoreca that is famous for its painted glass Art Nouveau ceiling, but the ceiling was covered with wood for some restoration work.  The wood paneling and grand staircase were nice, but the ceiling was what we had come to see. 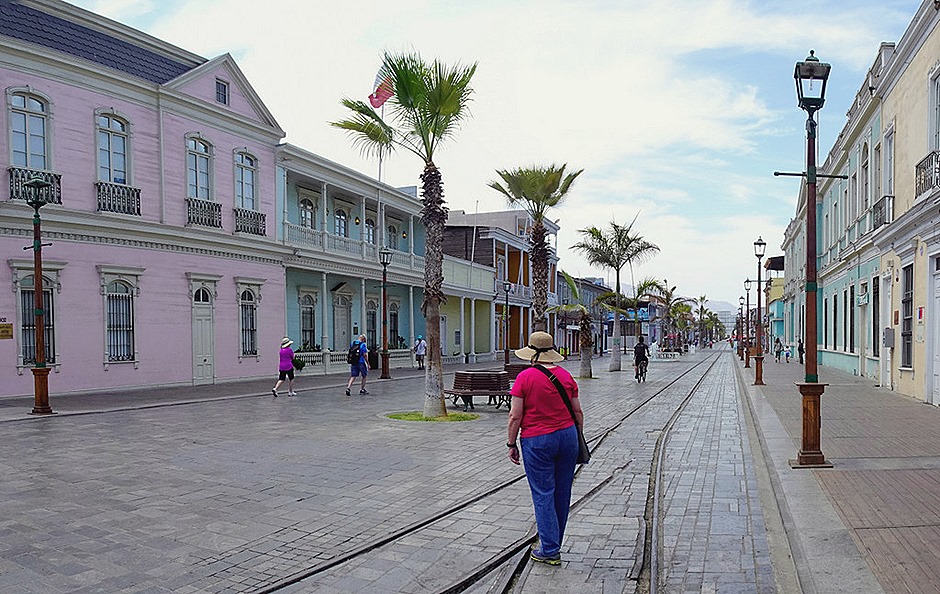 We visited the Museo Regional, an interesting little museum (it would be more interesting if we could read Spanish).  The museum was quite eclectic, with skulls of dinosaurs and other prehistoric creatures that presumably lived in this area and a large exhibit about the Santa Maria de Iquique Massacre of 1907 in which up to 2,000 striking miners and their wives were shot by the Chilean army as they assembled inside the Santa Maria school.  But the exhibit was all in Spanish so we could only look at the interesting pictures.  Best of all was an exhibit of mummies of the Chinchorro people.  A sign (in English!) said that some were up to 7,000 or 8,000 years old, thousands of years older than the oldest mummy found in Egypt.  They are well preserved because of the extreme dryness of the Atacama Desert.  Some ancient textiles (but not quite that old) were displayed here as well. 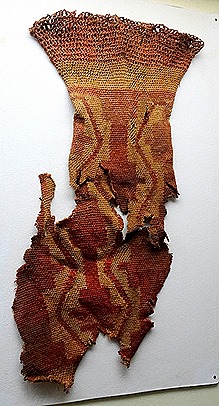 The day was sunny & the ocean was very blue.  Lots of people were out in it swimming and doing water sports, since it was the weekend.  We walked down the seaside promenade for a while enjoying the ambiance. Among other things we passed a fountain full of ducks, strangely still because they were made of stone. 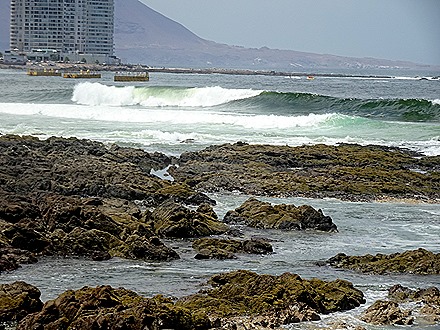 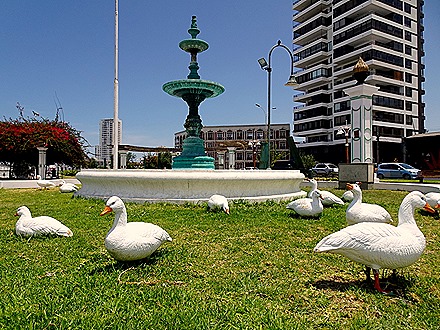 From the ship we had a good view of the large container port next to where we were docked.  The modern city extending up to a sharp boundary on the sandy mountain was also an interesting sight from there.

As we sailed away the city diminished until it was little more than a line separating the mountains from the ocean.