February 19 was our second day in Buenos Aires.  There was an earlier settlement here from 1536 to 1542, but Buenos Aires was permanently founded in 1580.  It is the capital of Argentina and has a population of almost 3 million, with close to 16 million in the metropolitan area.

We took the ship’s shuttle bus downtown to Plaza General San Martin & walked to Plaza Lavalle.  On the way we passed the Torre Monumental.  Built by the Argentine British community using bricks & stone shipped from England, it was originally called the Torre de los Ingleses (Tower of the English), but after the Falklands War in 1982 its name was changed.  Intended for the celebration of the centennial of the May Revolution of 1810, it was not actually completed until 1916.  We crossed Avenida 9 de Julio, an enormous avenue with an impressive view that is more than 100 yards wide.  It is divided into several parallel streets with the metrobus running down the middle and it often takes two or three changes of the traffic lights to get all the way across.  First planned in 1888 the avenue was not completed until the 1980’s.

Lavalle plaza was named in 1878 for Juan Lavalle, a leader in the war for independence that ended in 1825.  The park is three blocks long and contains a number of trees more than 100 years old.  It was the site of a massacre of more than 300 demonstrators in 1890.  In the middle of the park is a very tall monument to General Lavalle, who was a direct descendant of Hernan Cortez.  Erected in 1887, it consists of a sculpture of the general on top of a pillar.  The red cupola to the right of the statue is what remains of the Mirador Massue, a 1903 apartment complex.  To the left behind the monument is the National Palace of Justice, opened in 1910, which houses the Supreme Court. 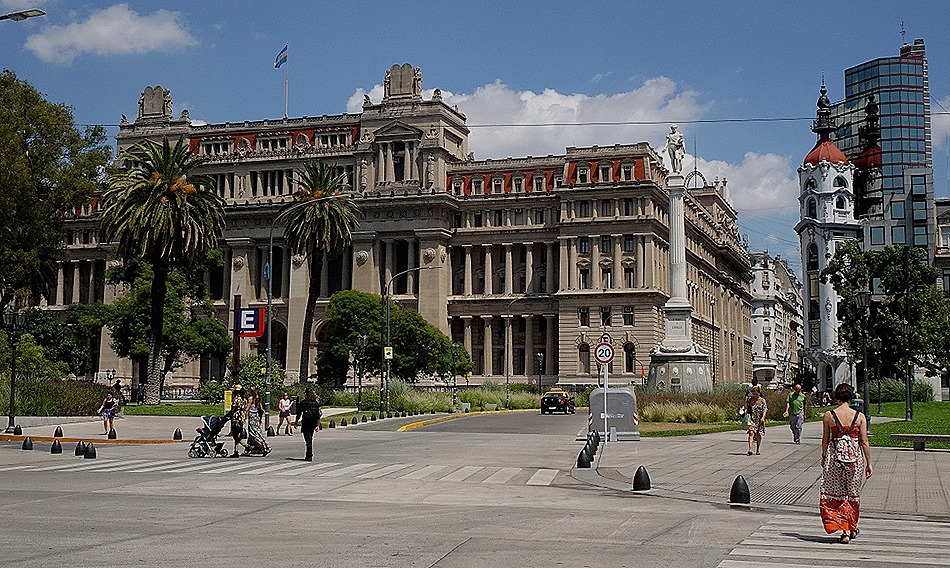 Across the street from the plaza is the Sinagoga de la Congregacion Israelita Argentino built between 1897 and 1932  Some quarter of a million Jews live in greater Buenos Aires, the largest Jewish community in Latin America and the eighth largest in the world.  You may notice that the mosaic in the last picture looks like Mr Spock’s Vulcan salute from Star Trek.  No, this is not a Vulcan temple.  Leonard Nimoy, who was Jewish, actually took that from a Jewish prayer ceremony he remembered from his childhood.

Two important theaters sit on the edge of the plaza.  Teatro Nacional Cervantes opened in 1921 and was extensively renovated after a fire in 1961.  It houses the National Stage Theater & the National Comedy Theater.  The larger Teatro Colon is the main opera house of Buenos Aires & is considered one of the great opera houses of the world.  It opened in 1908 on the site of an earlier theater that had opened in 1857.  The Cervantes theater was not open to visitors when we were there.  We had planned to tour the Teatro Colon, but when we were in line for tour tickets we were told that an electrical failure meant that the lights would not be working in the theater.  Concluding that there was no point in touring the opera house with the lights off, we walked away disappointed.

Leaving Plaza Lavalle, we trekked on toward Plaza de la Republica where the Obelisk of Buenos Aires is located.  One of the main icons of the city, it sits in the middle of the wide Avenida 9 de Julio and is visible up and down the avenue.  Built in 1936, the Obelisk is 220 feet tall.  The Argentine flag was first raised at a church located here on August 23, 1812, by its designer General Manuel Belgrano.

We walked on to the Café Tortoni, a venerable coffee house that is also a national historic monument.  Opened in another location in 1858, and named after a popular café in Paris, it was moved to its present location on Avenida de Mayo in 1889.  The current entrance was opened in 1898.  The floor above the café contains the Tango Museum.  The café’s interior is supposed to be quite impressive, but we didn’t have time to spend here if we were going to make it to the last shuttle bus back to the ship.  Maybe next time.

We walked through the streets toward the Plaza de Mayo.  The streets of Buenos Aires are crowded and noisy, in stark contrast to Montevideo, but the architecture is interesting, particularly the wrought iron balconies.

As we approached Plaza de Mayo we encountered the Metropolitan Cathedral on our left.  Completed in the 1860’s, the Cathedral is on a site set aside for the church at the founding of the city in 1580, which held several earlier churches and cathedrals that didn’t hold up.  Frescoes were added to the interior walls in 1907 and the floor was covered in mosaics in 2010. The main gilt wood altar and the pulpits date from the 1780’s.  The cathedral has a beautiful pipe organ built in 1871 with more than 3500 pipes. 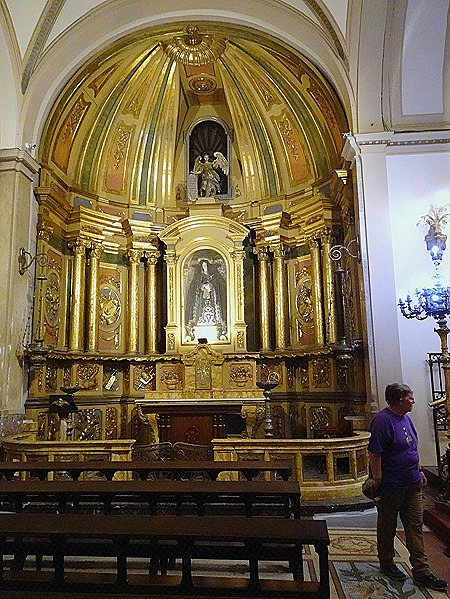 Jose de San Martin was one of the leaders of the South American fight for independence from Spain.  He was the leader of the successful liberation of Argentina and Chile and participated in the liberation of Peru.  After an unsuccessful conference with Simon Bolivar at Guayaquil in 1822 in which he sought to join forces, San Martin suddenly resigned his command and in 1824 moved to Europe.  He died there in 1850 and was buried in France.

In 1880 his remains were moved to a mausoleum in the Metropolitan Cathedral in Buenos Aires. It is fashioned with variously colored marble.  His black sarcophagus is on a raised platform surrounded by three female figures representing Argentina, Chile and Peru, the three largest regions whose freedom from Spanish colonialism is attributed to him.  At the door is an honor guard. 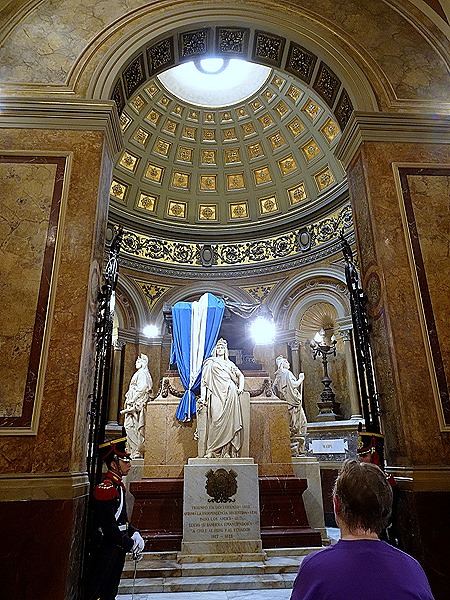 Plaza de Mayo was set out in 1884 on an area that included the Plaza de Armas of the original settlement.  It has been the location of a good deal of political activity over the years.  In recent times it was the location of the weekly vigils of the Mothers of the Plaza de Mayo from 1973 to 2006.  These were women whose adult children had been “disappeared” during the military dictatorship and they were demanding information about the missing people and exposing the regime’s crimes to the world.  They wore white headscarves embroidered with their children’s names to symbolize the diapers of their missing children, they marched 2 by 2 in silence.  Some of them also “disappeared” and several were later found to have been murdered.  Today the area where they held their demonstrations is decorated with stylized headscarves. 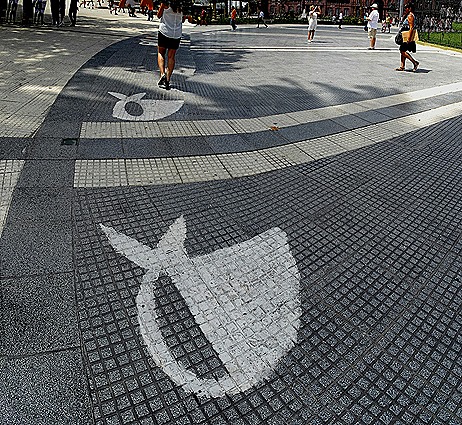 In the middle of the plaza is the Piramide de Mayo, a statue representing Liberty standing on top of a pyramidal base.  First erected in 1812 to celebrate the first anniversary of the May Revolution that set off the war for independence, the monument has been renovated several times and was moved some 60 yards to its current location in 1912.  In 2005 the ashes of Azucena Villaflor, founder of the Mothers of the Plaza de Mayo who had been murdered by the military dictatorship, were buried at the base of the pyramid.  In front of the pyramid is an equestrian statue of General Manuel Belgrano, a hero of the wars of independence, holding aloft the Argentine flag which he had designed.  It was unveiled in 1873. 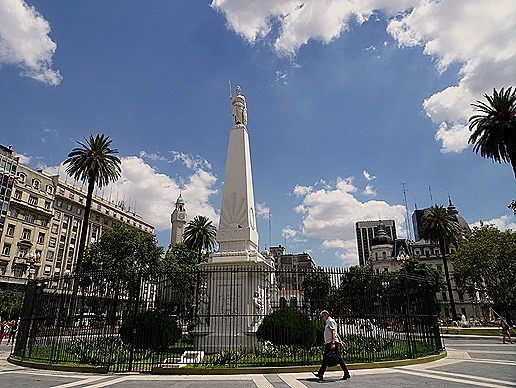 At the end of the plaza behind the piramide is the Casa Rosada, the seat of the executive branch of the government.  This spot began as a fort in the original 16th century settlement and has been changed a number of times.  The current building was completed in 1898.  The building was first painted pink in the 1860’s, and we have seen two explanations: 1) that it was intended as a blending of the colors of the two major political parties, the Whites and the Reds, or 2) that cow’s blood was included in the original paint to protect from damage from humidity.  The balcony to the left of the central portico has been the scene of many political speeches to crowds gathered in the plaza, notably by Juan and Eva Peron.

So by now we were pretty much done in.  A lot of walking on a very hot day (what a contrast to Antarctica, less than three weeks earlier) will do that to you.  And we still had to hoof it all the way back to Plaza San Martin to meet the shuttle bus before the deadline.  We wanted to mail some post cards, but when we finally found a post office it didn’t sell postcards.  It’s amazing how hard it is in a city this size to find postcards!  While searching for the post office we came across some more interesting buildings, including Centro Naval, a social club founded in 1882 by Argentine Navy officers.  And back at Plaza San Martin, where we narrowly missed one shuttle bus and had a lengthy wait for another, we came across a metal sculpture of butterflies. 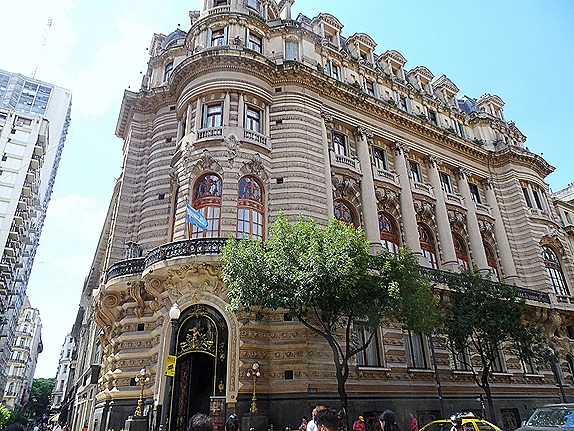 Exhausted as we were when we reached the ship, we were glad there would be two sea days before our next port.  So we said goodbye to Argentina and headed north toward Brazil.