We were on the second tender to Alter do Chao on the morning of March 13.  Founded by the Portuguese in 1626, Alter do Chao is on the Tapajos river about 10 miles from Santarem.  It is a beach community with what is reputed to be one of the world’s best freshwater beaches, although when the Amazon is at high water those beaches disappear.  We were joining another Gil Serique excursion, and it was a pretty long one, so we wanted to be sure we weren’t the last ones there.  It turned out there was hardly anyone else on our tender and we had to wait quite a while in a nearly deserted town square at the end of the tender dock before the tour was ready to depart.  The town square was surrounded by vendor kiosks that were starting to open when we arrived.

When everyone finally arrived we left in two small buses for the Tapajos National Forest.  Unfortunately Gil had another group stopping in Santarem today so he didn’t accompany us, but his compatriots did a fine job organizing the tour and explaining everything.  After a fairly long drive to the forest we stopped in what looked like a picnic area then began a lengthy walk in the forest.  We saw many pretty flowers and a lot of very tall trees on this walk.  We were given explanations about a number of these trees, but sadly we can’t remember most of them any more. 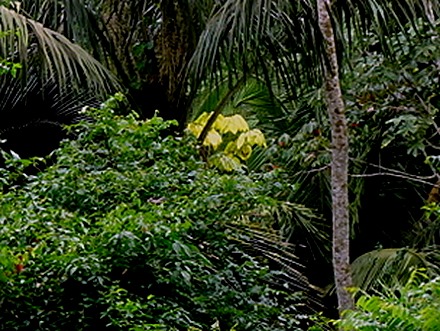 We walked through the woods, stopping at a giant ant or termite nest hanging from a tree.  We passed what we think is a mahogany tree and some other trees we can’t identify. 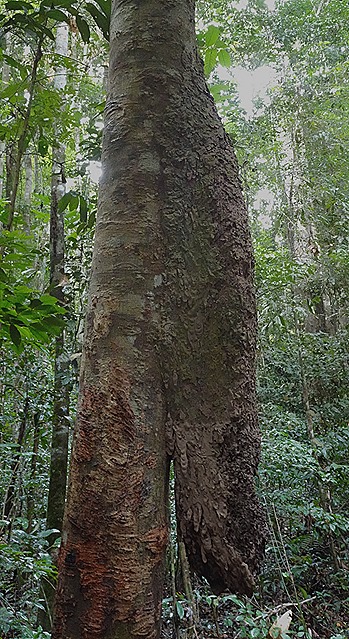 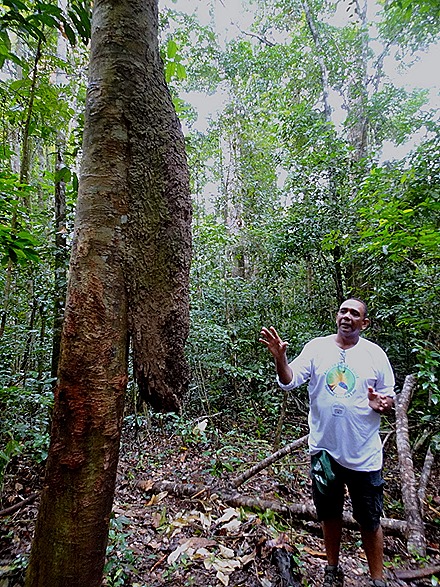 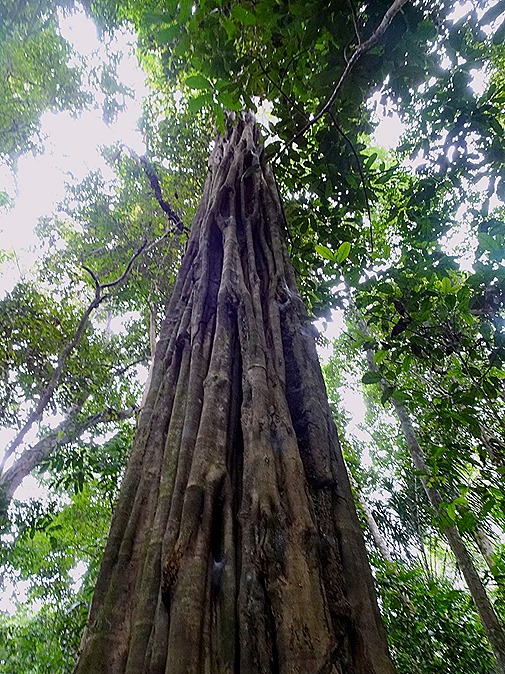 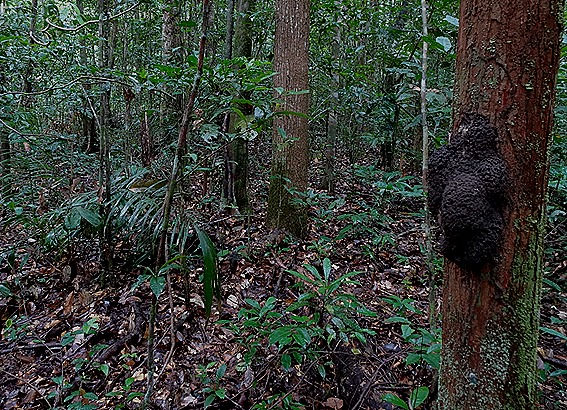 Large, thick vines were climbing up trees and sometimes wrapping around themselves to get through open spaces.  Some of them climb all the way to the canopy where they can get more light.  As they spread out to other trees they also help tie the treetops together, helping to keep them from falling.  We passed one big tree that had fallen.  Other trees had what looked like long vines hanging from the tree tops all the way to the ground, but we think these were generated by older vines that had climbed up their trunks.  These latter vines are quite strong; they held the weight of one of our guides swinging on them. 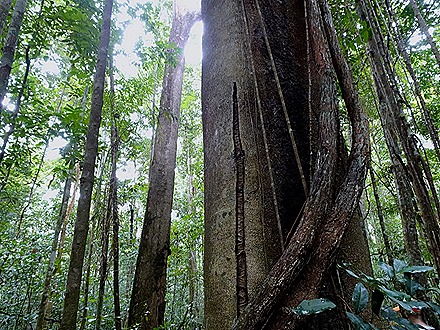 We returned to the picnic site, where the guides cracked and roasted some Brazil nuts over an open fire.  We had some snacks at the picnic table, and someone found a turtle (tortoise?) who walked along the table. 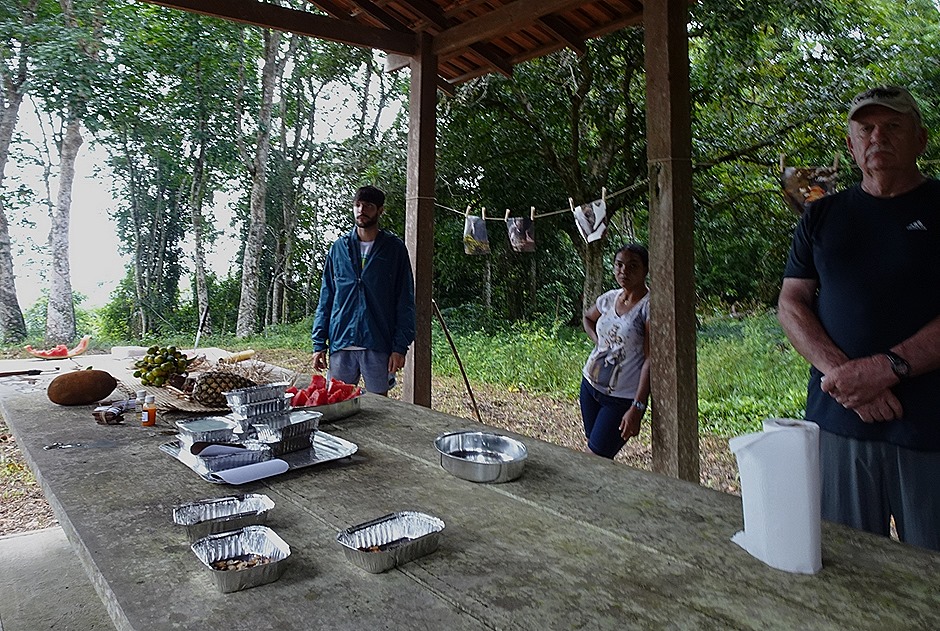 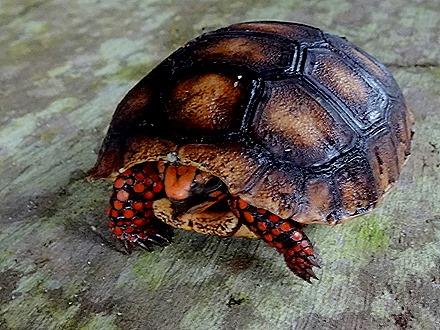 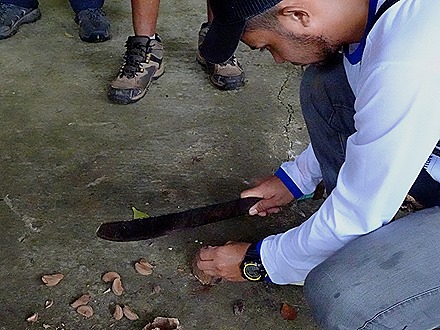 After we ate & the rain stopped we went for another walk.  This time we saw rubber trees, with the characteristic striped scars caused by tapping.  They grow tall . . . if you have one (ficus) in your living room, keep an eye on it. We also visited a huge Kapoc tree, whose root structure spreading at the base of the tree was much larger than a person. 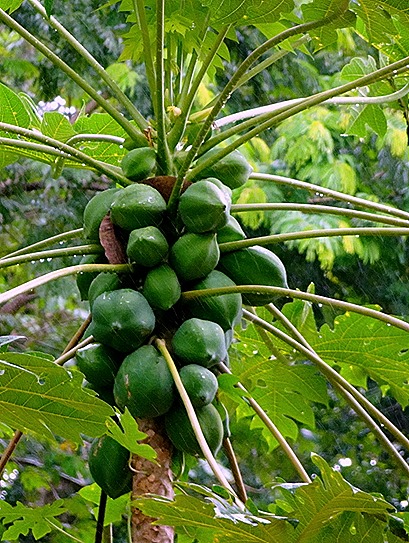 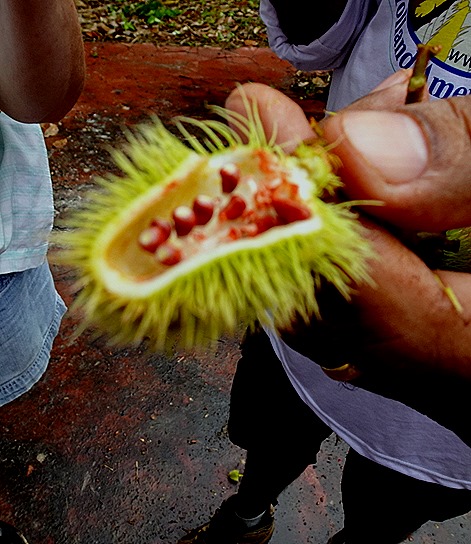 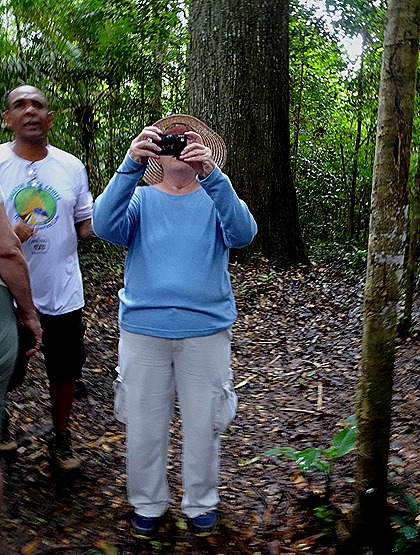 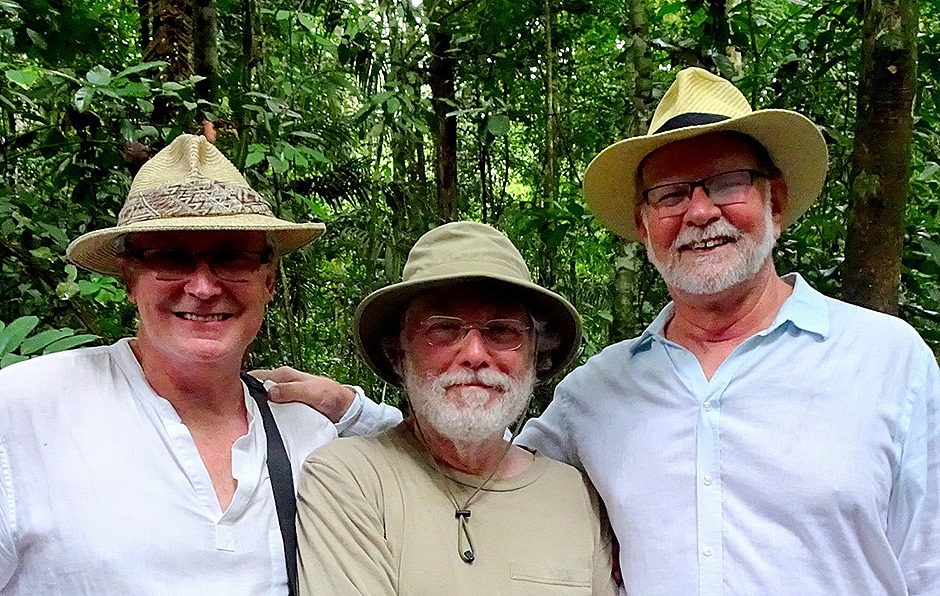 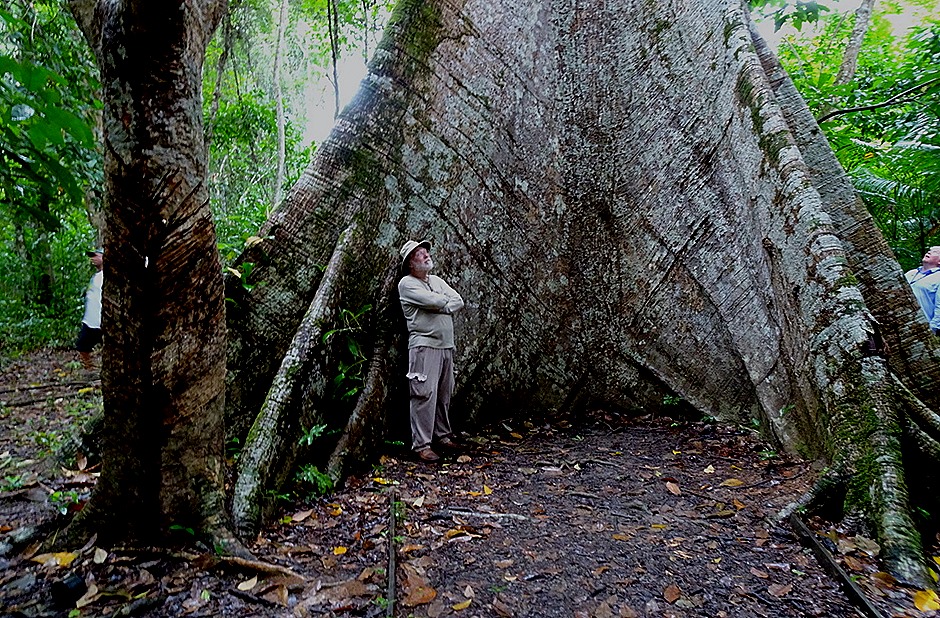 We left the woods in our bus and on the way we encountered a porcupine in the middle of the road.  He didn’t seem to be going anywhere so we all got out of the bus to take a better look.  He was a handsome fellow. 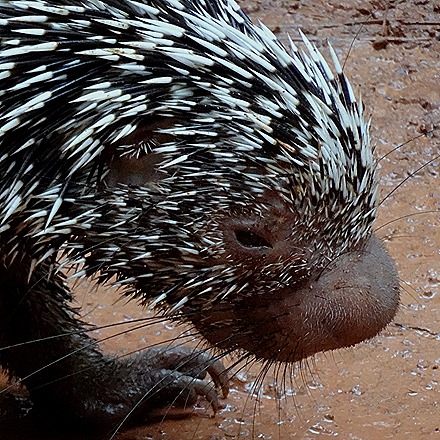 Even with all these people milling around looking at him the porcupine didn’t leave.  This seemed odd until we got a look at his other side.  There was a large wound just above his hip, which was probably making him weak and lethargic.  Eventually he walked slowly away toward the woods, but with no chance of medical care he probably didn’t live much longer. 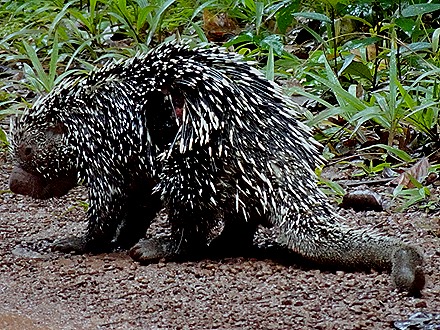 At the entry station for the national park we had to stop for some paperwork.  While we were stopped one of the guides found a really large beetle (it looked a little like one of the aliens in the movie Men In Black).  We have seen some large bugs on the ship while in the river, mostly moths, although on our first visit here in 2012 there were some much bigger ones.  But this guy gets the award for Best in Show. 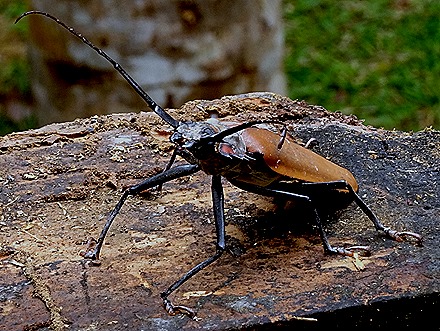 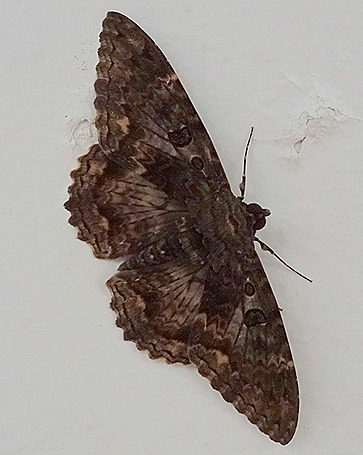 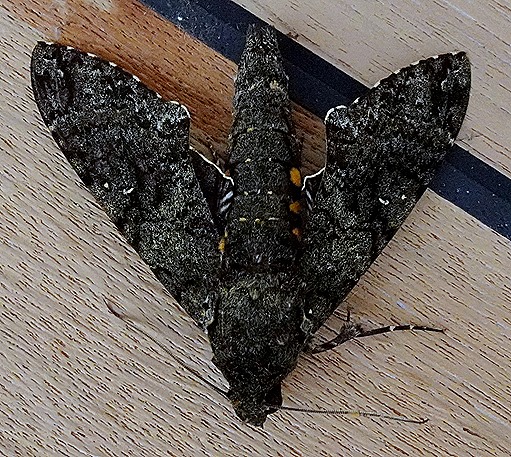 If you have been following this blog you know that rubber trees are native to the Amazon area and to nowhere else in the world.  Europeans made great fortunes here from rubber, tapped from trees isolated throughout the forest by indigenous people who were effectively enslaved.  But in 1876 Henry Wickham gathered and exported some 70,000 seeds to England under false pretenses (Gil Serique’s grandfather assisted him).  The seeds were planted in Kew Gardens in London and about 2700 sprouted into trees, which the British sent mostly to Asia to establish their own rubber tree plantations.  They far out-produced the Amazon, which still relied upon tapping isolated trees in the woods, and by the 1920’s the British had a virtual monopoly on the world’s rubber supply.

Henry Ford did not like paying the monopoly prices for the rubber he needed for car valves and gaskets so he decided to start his own rubber plantation in the Amazon.  He obtained a very large tract of land on the Tapajos River about 190 miles from Santarem and proceeded to erect a plantation town there in 1928.  The enterprise was a failure from the start, since Ford wanted a town modeled on the American midwest and required the workers there to eat the kind of food he favored and forgo everything he though was a vice.  But the workers were Brazilians rather than Americans, who refused to conform to Ford’s vision.  Moreover the rubber trees planted in tight rows like an American orchard fell victim to native blight and pests that did not exist in Asia; the trees isolated from each other in the forest did not have this problem.  The town was closed down in 1934 without ever having sent a drop of rubber to America.   An excellent book about this enterprise was published a few years ago called Fordlandia: The Rise and Fall of Henry Ford’s Forgotten Jungle City, by Greg Grandin (Gil was his guide to the area).

Ford tried again at a spot only 25 miles from Santarem, where the river transport was easier, the land was more level and the soil was very rich.  He built another midwestern style town called Belterra, where he tried to accommodate local culture and customs more effectively.  This new plantation was able to defeat the blight using more varied cultivars of rubber trees, but doing so was labor intensive and expensive.  Although some small groves of rubber trees were established here, World War II diverted the Ford company’s attention to supplying the military and by the end of the war synthetic rubber was available, with which Belterra couldn’t compete.  The Ford company sold both locations to the Brazilian government in 1945 for a fraction of what they had cost.

Fordlandia is much too far up the river to visit on a day trip, but we did visit Belterra after leaving the Tapajos national forest.  The bus carried us over narrow unpaved roads to what is still a small midwestern style town filled with green and white painted bungalows surrounded by picket fences and gardens.  We got out of the bus and walked down one of the main streets. 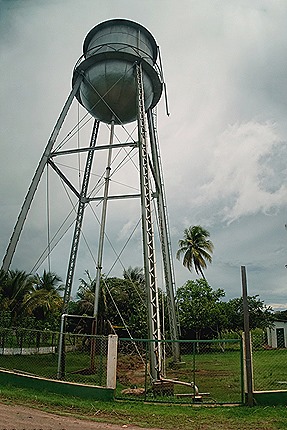 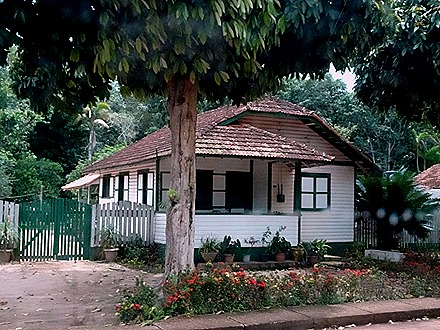 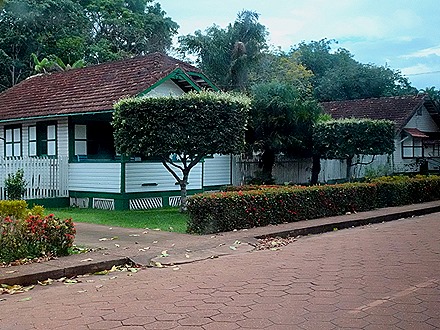 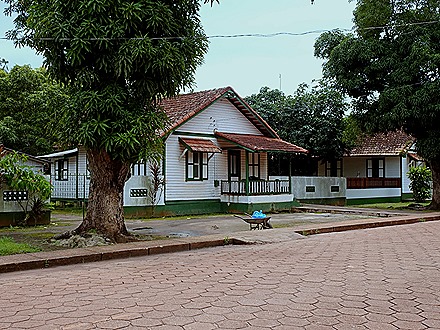 You can see that these buildings look nothing like the typical architecture of Brazil that we have seen before.  In fact, Henry Ford never visited Brazil and these houses were designed by an American to look like the architecture with which he grew up in small town America.  Each house is different, yet they are all of a single style and present a very homogenous appearance.  It’s actually a little eerie coming upon this neat midwestern town so out of place sitting in the Amazon rainforest, almost like something from a Ray Bradbury story or a Twilight Zone episode. Although Ford’s enterprise here failed this is still a living town with a population between 1,000 and 2,000.  Walking down the street we passed the town hall and a lot of rubber trees.

Leaving Belterra we drove on very bumpy unpaved roads back to Alter do Chao.  Construction equipment was scattered along the road and we were told that they are in the process of paving it, which will be a big improvement.  Gil’s house is by the water about a 15 minute walk from the tender pier.  Unfortunately, since Gil was out guiding another group, he wasn’t there with us. 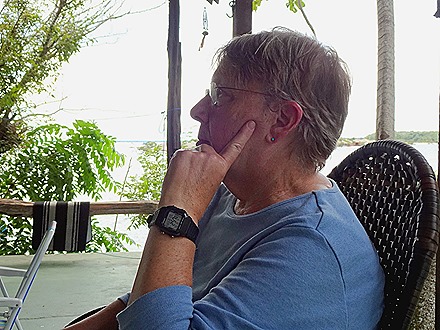 A few things to eat were set out on a table in the patio nearest the water, and a number of attractive flowers were planted on the grounds.

Most interesting, however, was the wildlife.  There was an iguana, a white butterfly and a colony of leaf cutter ants, hard at work.  Another interesting item was a bullet hole in a table on the covered patio.  According to Gil, this was a door in his uncle’s house and the bullet was fired when the police came to arrest him. 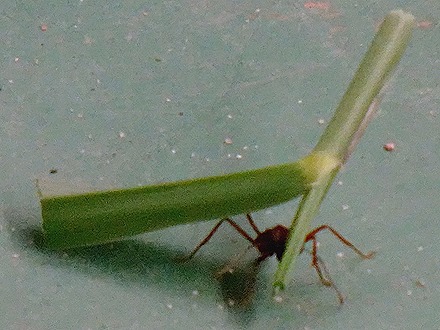 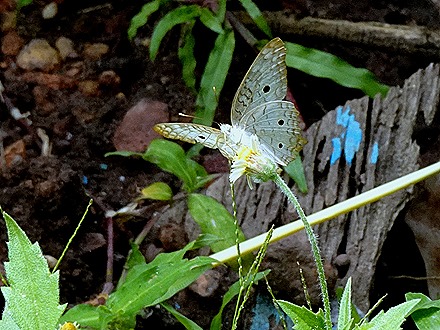 After leaving Gil’s house we wandered through the town.  It has a pretty laid back beach town vibe, with mostly unpaved streets and few if any sidewalks.  We passed the local church, Our Lady of Good Health, on our way to find a shop we had been told about which has a fantastic array of Amazonian wares.  We walked back to the tender dock, where Mary phoned home before we tendered back to the ship. 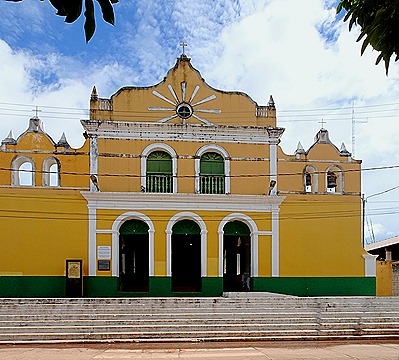 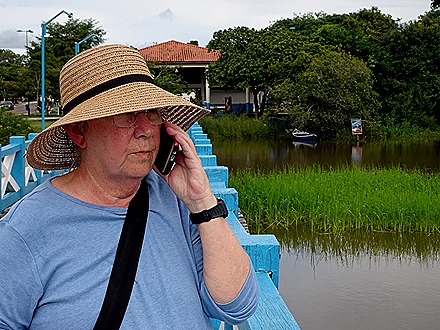 And so ended our last stop in the Amazon, altogether an excellent adventure to be sure.  We headed out into the Tapajos River on our way to the Amazon and then to the Atlantic.