On Thursday evening, January 26, we left Castro & sailed south toward our next stop, Puerto Chacabuco in Patagonia.  This area is just stunning.  During dinner we watched a glorious sunset, which turned the top part of the mountain range that was along the channel a beautiful pink .  Because we were at dinner we didn’t get a picture of the range, but here are a couple of shots of mountains in that range.  They really do not do justice to the sunset colors. 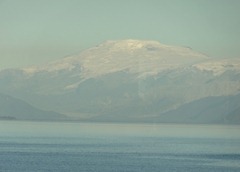 Friday morning, January 27, found us in the harbor of Puerto Chacabuco.  The weather was quite ugly, so rainy & cloudy you couldn’t see much.  We had to go ashore via tender boats & for awhile the water was so choppy they wouldn’t let us board the boats.  Happily, the weather in this area can change extremely quickly and for most of the day it turned out to be beautiful & sunny.  Here are two views of Puerto Chacabuco from the ship, one in the morning & the second in the evening.  Quite a difference.

Puerto Chacabuco was built in 1995; it is just a port & there is no town.  The port here used to be at a town called Puerto Aisen.  However in the late 1980’s & early 1990’s there was a long series of forest fires causing erosion from the mountains that filled the river with silt, making the river un-navigable.  So they built this new port at Puerto Chacabuco, but the nearest town is still Puerto Aisen.  Here are a few views of the area around Puerto Chacabuco. 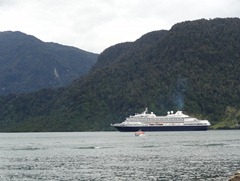 We took a privately arranged tour of the area that took us first to Puerto Aisen.  The guide said no one knows the origin of the name but one theory is that when the first settlers came this was the limit of the local ice sheet, so they called it “ice’s end” or Aisen.  Sounds dubious to us, particularly since that phrase sounds suspiciously like English.  Anyway, it’s a small frontier town on a river nestled among large snow-capped mountains.  The weather really changed during just the 20 minutes or so that we were there; I have included at the end of this sequence two pictures of the same mountaintop from the Plaza de Armas taken about 3 minutes apart. 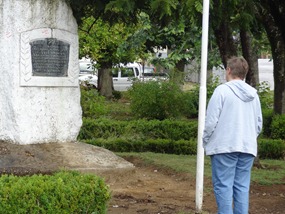 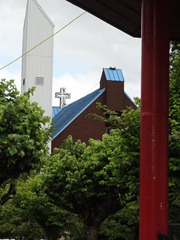 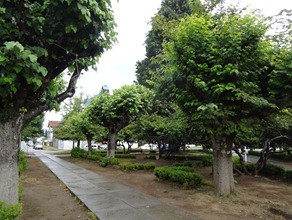 Next we saw a two level waterfall called Cascada de la Virgen, named after the shrine next to it of (what else?) the Virgen de la Cascada.  After that we went to a nature preserve including part of the Rio Simpson, a lovely river among the mountains popular with fly fishermen.  Among other things, we saw there some wild fuschia & a giant relative of the rhubarb which is eaten by the local folks, but we didn’t see any of the condors that live there. 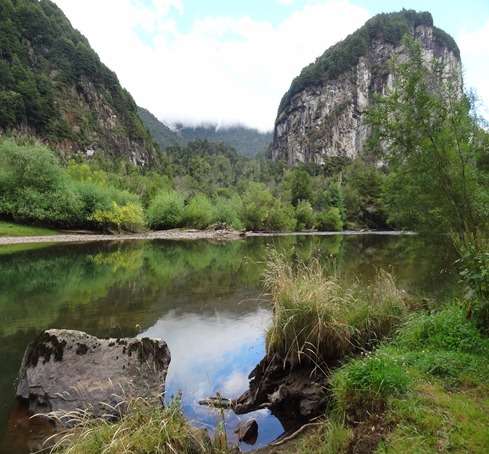 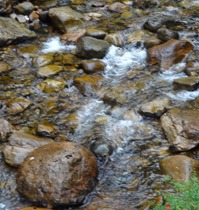 We had lunch at a “campo” or country house in a place called Pangal.  This is not a tourist place but a family who are friends of the guide.  They grow most of their own food; there is a greenhouse for growing salad greens, and they have llamas, sheep & geese (at least that is all we saw).  Lunch was served in their “quincho,” a wooden barbecue house designed for parties & celebrations.  Because the van could not cross the suspension bridge on the way to the campo we had to walk about a half mile, across the bridge (which is solid, but does sway a little) and through some beautiful mountain scenery. 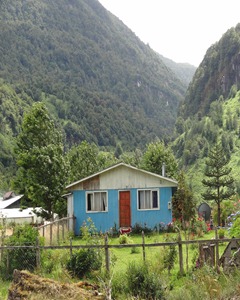 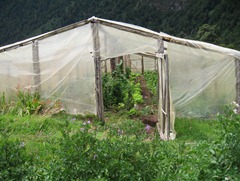 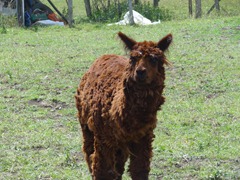 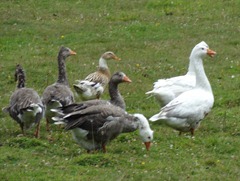 In the quincho was a huge fireplace in which a whole lamb was roasting on a spit.  We were told that it had been cooking for about 4 hours.  We were given a pisco sour & Chilean wine to drink and were served the lamb as “asado al palo,” along with salad & potato & fried bread called sopas.  It was all delicious.

During the meal we were entertained by a young couple doing local folk dances (one of the dances was called a “cueca”).  The gaucho appeared to have a roving eye. 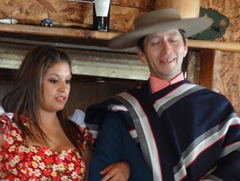 Outside was this little ram making a lot of noise & looking like he really wanted to go inside the quincho.  I tried to tell him that it wasn’t pretty for lambs in there but he didn’t seem to believe me. 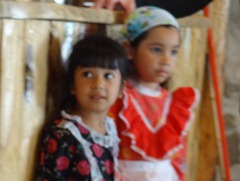 After that we went back to the ship, making one more pass through this beautiful territory.  As usual there was a towel animal to cap off the evening (you wouldn’t want to miss one of those, right?). 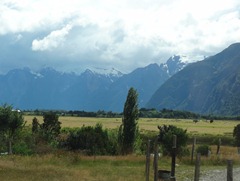 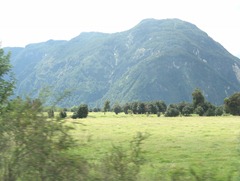 Friday night was very rough. The captain came on the speaker around 8:00 to tell us that they were changing course because of bad weather & we would be going out into the ocean at midnight, where we would stay most of Saturday and then go back into the fjords Saturday evening.  He told us to prepare for bad weather and to secure everything in our cabins “unless you want to see your Ming vase rolling around the deck on your verandah.”  We don’t have a verandah in our cabin (or a Ming vase, for that matter) but we did secure everything in our cabin, putting things in drawers & cabinets.  During the night the ship was going up & down quite emphatically; in the middle of the night I was awakened when our bathroom sliding door suddenly slammed shut on its own initiative (Mary, amazingly, slept right through that).  The next morning the captain told us we were experiencing 15 foot waves & gale-force winds.  It surely felt like it; you couldn’t walk in a straight line around the ship, but were constantly weaving back & forth like a drunk.  First the floor would be inclined to the left, so you would lean in that direction to maintain your balance, but suddenly the floor would be inclined to the right instead, so you would stagger to the left while trying to regain your equilibrium by leaning to the right, but just when you thought you had succeeded the floor would suddenly be inclined to the left again & the cycle would repeat.  I told Mary we were getting good exercise out of it since you had to walk twice as far to get anywhere on the ship with the constant zig-zagging.  I took a couple of pictures of the waves, but because of the height from which they were taken they do not begin to convey what it really looked like.

We did go back inside the fjords around 7:00 & it was much calmer.  We could see impressive mountains along the side of the channel but it was too misty to get a decent picture.  When on a long voyage like this, away from the normal rhythms of city life, it is easy to lose track of the days.  So on Prinsendam they change the floor mats in the elevators every day as a reminder (remember, there are lots of older folks on this cruise, so memories are probably generally less than stellar).  And, of course, another towel animal. 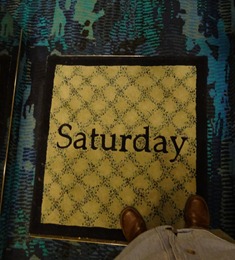 From this point on for the next couple of weeks internet access, and therefore blog postings, will probably be pretty spotty.  We have ‘”scenic cruising” on Sunday, we are in Punta Arenas on Monday (where I hope to post this blog entry), then Ushuaia, Argentina, on Tuesday (where I may have another blog post),. After that are 5 days of cruising through Antarctica where we will most likely be incommunicado.  We are supposed to be in Stanley, Falkland Islands on Monday, Feb. 6 (although we are told that weather prevents going ashore there about half the time), then two more days at sea until we reach Buenos Aires on Feb. 9.  After that communications should be better & you will hear from us more often.

This entry was posted on January 30, 2012 by Rick. It was filed under South America Circumnavigation .