We were woken early on Saturday, February 4 ,by an announcement that we had reached King George’s Island (at least that is what most people call it; the Argentines call it Isla 25 de Mayo, which I think commemorates some battle).  The weather was pretty bad again: foggy, cold & very windy.  But up I got to go outside & see the sights (Mary wasn’t feeling well, so I let her sleep a little later). 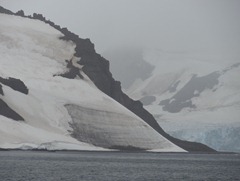 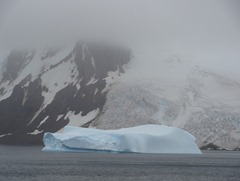 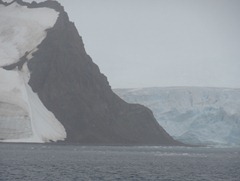 There was a Polish station on the island; I know it was Polish because the name of the station (Arctowski) is printed on the side of one of the buildings.

At the end of King George’s Island was Penguin Island.  It is a former volcano & you can see the crater in the middle where the top of the mountain blew off. 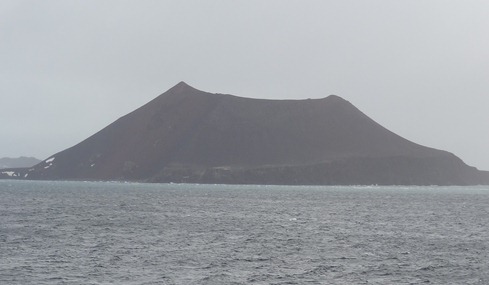 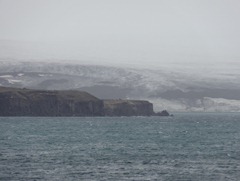 Well, we were supposed to continue cruising Antarctica the rest of the day, including sailing by Elephant Island where Shackleton’s crew spent half a year on the beach waiting for his return.  But the Captain concluded that bad weather was headed our way so he decided to cut it off and head directly north toward the Falklands.  We were, obviously, quite disappointed by that.  But when the weather gets bad down here you can’t see much anyway.  We passed within 35 miles of Elephant Island on our way north so I thought it shouldn’t have been that much of a problem to go by & see it, but what do I know about sailing?  (answer: not much.)  So this is all we saw this day.  The irritating thing is that for the last 2 or 3 years at least the Antarctic portion of this cruise has been sunny & beautiful throughout.  The Antarctic experts on board (there were several, & they were quite knowledgeable & impressive) told us that we had been able to  experience the REAL Antarctica because this is what it is like most of the time, but I don’t think anybody was buying that line.  Oh well, what we did see of Antarctica was pretty fabulous. Maybe we will get back here again one day.

The sail north to the Falklands was very rocky.  Take everything I told you earlier about being on a ship in rough seas, then double it.  We had to hold on to something pretty much all the time to avoid falling down (fun to take an adventure shower, holding on with one hand at all times) & waves hitting the ship were splashing well over our room window, which is the equivalent of about a 5 story building above the water level.  Everything was tied down and no one was allowed to go out on deck.

On Sunday there was a Super Bowl party & it only cost $50 per person to attend (we passed).  But the good news is that the towel animals were back.  Several were repeats of things we have already seen but there have been a couple of new ones.  You may not agree with my interpretations in the captions, but they don’t tell us what kind of animal they are supposed to be. 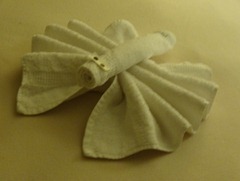 This entry was posted on February 9, 2012 by Rick. It was filed under South America Circumnavigation .