Buenos Aires is a huge, crowded, loud city, which reminded us in many ways of New York.  There are about 3.5 million living in the city & about 14 million (!) if you include the suburbs.  It is sometimes called the “Paris of South America” & many seasoned travelers say it is their favorite city, but we couldn’t see why.  Of course, we didn’t eat in its restaurants, which are supposed to be outstanding if you like steak (and lots of it), and we didn’t stay in any of its hotels, some of which looked pretty fancy.  But still: big, loud, crowded; not our cup of tea.

We arrived on Thursday, February 9 for an overnight stay.  We were supposed to be able to go ashore about 8:30 AM, which would have given 2 full days (& 1 night) there, but we actually didn’t arrive until after 2:00 in the afternoon.  Buenos Aires is not on the ocean, but a 9 hour cruise up the La Plata river.  It seems that the La Plata river is pretty shallow so you have to take ocean going ships through a channel, and to make matters worse there was a disabled ship halfway up the channel.  As a result, river navigation was only one way at a time so they were scheduling ships for convoys each way, kind of like when one direction on a two-way road is under construction so that one line of cars travels in one direction while the other direction is stopped.  Well we were two hours late leaving the Falkland Islands so we missed our place in a convoy going up the river, resulting in our arriving about 6 or 7 hours late.

We had booked a private tour that would have taken all day and involved walking around in a number of areas of the city & lunch in a restaurant.  However, that tour was cancelled because of our late arrival so we scrambled to get on a “Buenos Aires Highlights” bus tour (it was too late to do any worthwhile exploring on our own since it took about half an hour to get downtown from the port, involving two shuttle bus rides).  This was a 4 hour trip around town by bus with a guide, including two stops, at the Recoleta cemetery (where Evita Peron is buried) & at the La Boca neighborhood.

The Recoleta neighborhood is an old, wealthy part of town.  The cemetery there is old & is for the wealthy aristocracy of Buenos Aires.  Apparently Buenos Aires has historically had a very haughty aristocracy.  Anyway, this cemetery is a creepy city of above-ground mausoleums, many with grand statues & architecture (and thus very expensive).  Seventy of the mausoleums are national monuments! 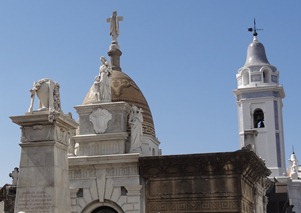 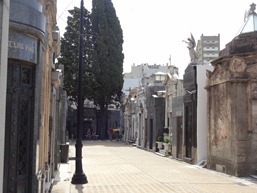 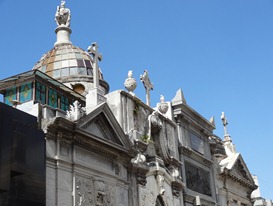 But today this cemetery is famous, and a mandatory stop on all tours, because Evita Peron is buried there.  Our guide told us that before the musical Evita! came out (and it has never been performed in Argentina), none of the tourists were interested in Evita & most had never heard of her.  But now, she says, she would be killed by the tourists if she skipped this spot.  Evita was an illegitimate child in a poor family but her mother claimed (I don’t know if its true) that a wealthy aristocrat named Duarte was actually her father.  When Evita died of cancer in 1952 she was buried in the Duarte family mausoleum in Recoleta, over their objections (since they didn’t recognize her as part of their family) because her husband was President (and she was really the power behind the throne because of her extraordinary popularity).  But when Juan Peron died in the 1990’s, no longer holding that power, he was buried elsewhere (for a while outside the country) because the aristocrats wouldn’t have him in their cemetery.  At least this is the story we were told.  Anyway, here is the Duarte mausoleum (it’s one of the less conspicuous ones, on a small side street in the cemetery) with one of several plaques outside honoring Evita.  We were told that there are fresh flowers placed on the door every day.

There is also a statue of Evita in the Recolleta district, erected (we think) in 2002 on the 50th anniversary of her death.

La Boca is the Italian neighborhood of Buenos Aires.  It was also the location of the original port (the new one is much bigger).  It has a mixture of bohemian, poor and tourist ambiance, but I think the last one probably predominates.  But it is colorful and enjoyable and some of its features look like they would be at home in Disney World. 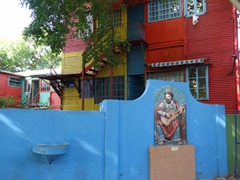 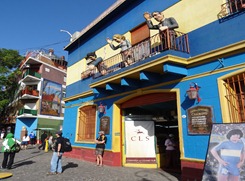 Buenos Aires is, of course, famous for the Tango.  There are tango shows all over town & people even dance it on street corners in La Boca (although we missed one that was going on near where we were).  It is an interesting & a sexy dance, but the cult is really a bit overblown.  Still, here are a few tango paintings that were for sale in La Boca that I thought were interesting. 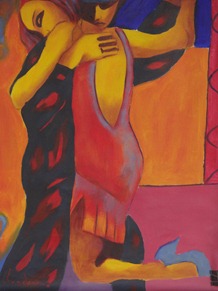 That night there was an Argentine folk dancing show on the ship.  We thought it was quite good (except for the lame narrator, who kept injecting himself into the middle of the music).  Notable was a tango (of course), performed by a couple who we were told were the tango champions of Argentina 5 years in a row.  The pictures aren’t very good, since the light was low & they were moving fairly fast, but you get the idea.

Also there were some interesting gaucho dances, with guys in balloon pants & gaucho hats acting very macho.  Particularly good was one in which a guy (the same one who did the tango) danced with bolas swinging in intersecting circles in each hand, and finally with him holding them between his teeth.  I’m guessing there were some some nasty bumps raised on his head while he was learning how to do that! 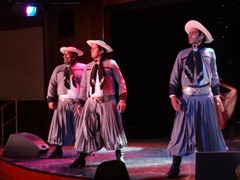 On our second day in Buenos Aires, Friday, February 10, we walked around town by ourselves.  As I said, it’s a loud & crowded city & we walked quite a way.  There are many beautiful old buildings in the city, many with lovely wrought iron balconies, often right next to boring modern ones. 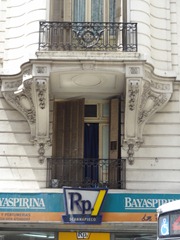 We walked by the Teatro Colon, a huge & ostentatious opera house, which appears to be made of marble.  Nearby is the Obelisco (which looks like the Washington monument) in the Plaza de la Republica, erected in 1936 on the city’s 400th anniversary. 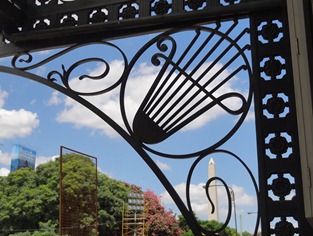 The Avenida 9 de Julio is one of the widest boulevards in the world.  Not far from it we saw the impressive Ministry of Justice (we think), for you lawyers out there.

We walked up to see the Congresso Israel, which we think is the oldest synagogue in the city.  Buenos Aires has a large Jewish community, the second largest religious community in the city (far behind Catholics, of course). There is a Jewish museum nearby. 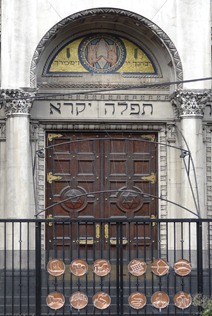 Then we walked all the way back to the Recoleta area to find the Biblioteca National (national library) so that the librarians in the viewing audience won’t feel left out.  It was quite a long walk and we had a lot of trouble finding it.  In the end, it was impressive, but I sure wouldn’t say beautiful (particularly in a city full of beautiful public buildings).  The sign in the second picture, which is probably too small for you to read, says that this is the library’s 200th anniversary. 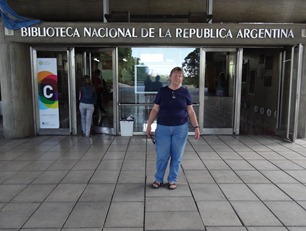 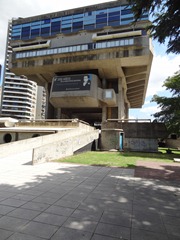 Finally, we didn’t see any notable fauna here, but there were some interesting trees.  In the first picture the slim attractive tree in the foreground with the pink blossoms is the male & the ones with the white blossoms and fat tummies are the females (this seems to be how nature works in all species but humans).  I didn’t catch the names of these trees.  Also in a park we saw these trees with massive root systems above ground that looked interesting.  And last (and probably least) is another clock tower reputed to resemble Big Ben in London that really doesn’t.  Maybe no Latin Americans have actually seen Big Ben.

So ends what was supposed to be 2 days in Buenos Aires but turned out to be only one day plus 2 hours.  The full 2 days would have been plenty to see this city, huge as it is, but we thought we did pretty well given the time limit.  Amazingly, this is not the biggest city we will have seen by the end of our trip.

This entry was posted on February 12, 2012 by Rick. It was filed under South America Circumnavigation .