Flying (or Sailing) Down to Rio (Part I)

We sailed into Guanabera Bay at Rio de Janeiro at sunrise on Tuesday, February 14.  This is a huge but really beautiful city, with mountains, rainforests & beaches everywhere.  There doesn’t seem to be an accurate account of its population because there are almost a thousand Favelas in Rio (Favela is the name for the squatter communities like we saw in Lima) and the government has no way to accurately count their occupants, particularly since officially most of them don’t exist.  Because Rio is to host the World Cup in 2014 & the Olympics in 2016 they are working hard right now to clean up the Favelas. They have successfully driven the drug dealers (who dominate many of the Favelas) from a few of them & somewhat regularize their use of services like water gas & electricity.  But even for those few that have been cleaned up the head count is doubtful.  We were told about one in which the govt. says about 75,000 people live but the electric company has 140,000 meters there, so the government clearly hasn’t yet gotten a handle on the population.  The best guess we heard for the total population of greater Rio was 14 to 16 million.  The people here call themselves Cariocas (I don’t know why, but I’m sure there is a reason).

Anyway, this is a city of breathtaking vistas so you will see a lot of them here.  The landscape is dominated by two mountains, Sugarloaf & Corcovado (which means “hunchback”), the latter of which is topped by the Cristo Redentor (Christ the Redeemer), the huge statue of Christ that has been named one of the 7 wonders of the modern world (we have wondered who is authorized to make such a designation, and we don’t know what the other six are, although the Taj Mahal is probably on the list).  We passed both of these on the sunrise sail into the harbor; and the Cristo Redentor was lit up.  In the first picture Sugarloaf is on the right & Corcovado is just to the left of center in the background, with the lighted statue atop it.  The second picture is Sugarloaf & the third is Corcovado. 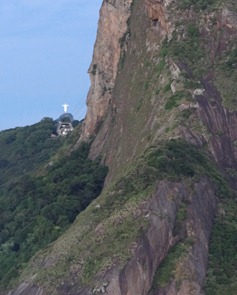 Rio has an airport right on the water that is used just for shuttle trips to Sao Paulo every 15 minutes. The planes fly in low & look like they will land in the water.  Nearby is the old customs house on an island in the bay, and there was a Favela on a hill behind the dock.  Note in the upper right corner of the Favela picture a formation of birds flying by.  We saw birds flying in formation over the bay & the city all the time here. 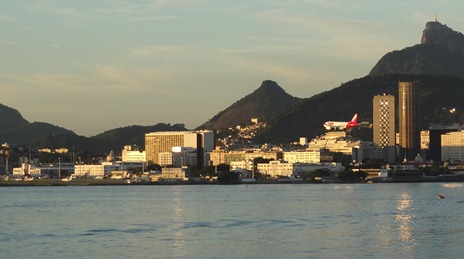 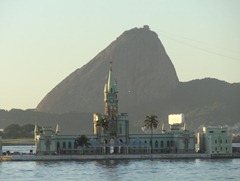 On February 14 we went on an excursion to the top of Sugarloaf mountain.  To get to the top you have to ride two cable cars – not the kind you see in San Francisco but cars hanging from a cable way high in the air.  First you ride up to an intermediate level mountain, then switch to another car for the trip to the top. 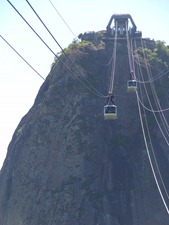 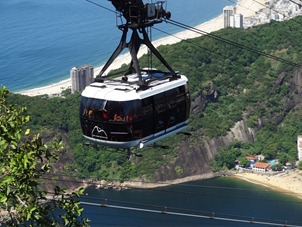 They have been running cable cars here for about 100 years without incident so it’s really safe.  Inside it’s like being in a subway car (only with a better view).  However, the car does sway a bit when you step off.  The views even from the middle level of Sugarloaf are pretty spectacular; as you can imagine, pictures do not really convey the full effect of a 360 degree vista.

From the top of the mountain, the views were even better. 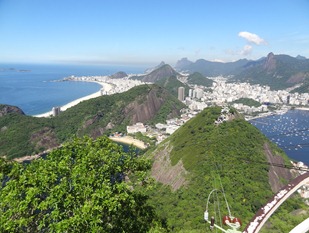 From Sugarloaf we could  see the most famous beaches of Rio:  Flamingo, Copacabana & Ipanema.

We drove along the beaches on both days.  They are very long (Copacabana 1 mile, Ipanema 2 miles) with beautiful blue water & white sand.  In addition to Copacabana (pictures 1 & 2) & Ipanema (pictures 3 & 4), we drove past Leblond beach (which is contiguous to Ipanema – named for a blond Frenchman who once frequented this beach) (pictures 5 & 6) & stopped at Sao Conrado beach, where hang gliders landed from the top of a mountain overlooking the beach, for a taste of Coconut. We were told that coconut water will keep you healthy & cure everything from arthritis to alzheimer’s.  But I only had one, so it will probably only stave off alzheimer’s for a couple of weeks. 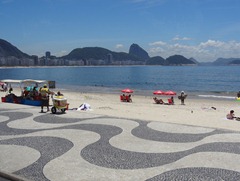 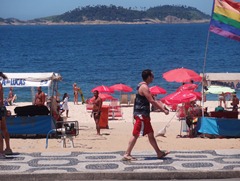 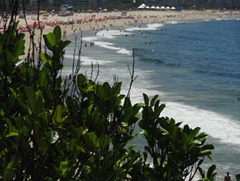 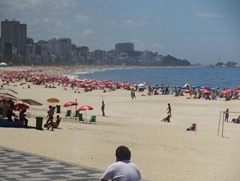 Brazil has no private beaches so access to these is open to all.  However there are sections recognized as areas where particular groups congregate: Copacabana is primarily for families we were told & there are sections of Ipanema for gays & lesbians, for young people, for children, for topless bathing.   We passed the Copacabana Palace, the best known hotel on the beaches.  Sound like a nice place to retire? Forget it; we were told that the condos in the high-rises on the street bordering Ipanema start at $20 million.  And to shatter yet another illusion, contrary to popular understanding not everyone on these beaches is “tall and tan and young and lovely,” although that doesn’t stop them from wearing bikinis.

One thing we found interesting is the sidewalk mosaics in Rio, and really throughout Brazil so far (we have seen them in two other cities visited since).  In addition to the famous undulating sidewalk design at Copacabana beach, there was a different pattern at Ipanema & Leblond, and several others around town.  All of them are made from white & black (& sometimes red) stones about 2 to 3 inches in diameter; it must have been a lot of work.  Below are a clos-up showing how the individual tiles fit together & then the sidewalks of Copacabana, then Ipanema, then a few others with mouse-over labels (you can also see these in the beach pictures above). 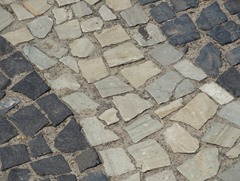 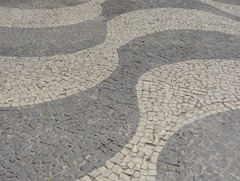 In the afternoon we walked down the Rio Branco, the main street of the central section of Rio.  Much of it consisted of boxy modern office buildings but the sidewalks were mosaic and there were some interesting older buildings.  This was  a very modern, busy thoroughfare with heavy traffic on foot & in cars.  Yet on the afternoon of the second day, our tablemate Bing was attacked there in broad daylight by a couple of guys who tried to tear a gold chain from his neck & run off.  Bing is an older guy (early 70’s), but fortunately our other tablemate Steve, a retired fireman, was with him.   He chased off one of the attackers & got the other in a headlock; Bing had grabbed his chain & managed to hold on.  The second attacker then ran off & Bing still has his gold chain, though it is broken.  The lesson here is that in foreign cities (really any big city) you should never wear jewelry or carry a camera or purse that looks worth stealing.  We have been warned about this several times; Mary & I (of course) always look like we don’t have anything worth stealing & my camera fits in my pocket  (a surprising number of the passengers on this cruise carry big cameras with very long lenses that look like they must weigh about 30 pounds).

Anyway, we didn’t run into any trouble on Rio Branco.  We saw a nice old church, built a few hundred years ago by a fellow who survived a shipwreck, with a nautical theme.  I only got a partial picture of the outside while driving by in a bus and it is not one of the important churches in Rio, but looking at the interior would make you think it was a major cathedral.

Further down the street is a square with several of the main buildings in Rio.  With the World Cup & the Olympics coming up, it seemed like every building in town was surrounded by fences and scaffolding as they work to restore & beautify the city for the world stage.  But we saw their beautiful opera house with its eye catching gold roof decorations.

And of course we saw (or rather sought out) the Biblioteca Nacional, which is a little less spectacular. 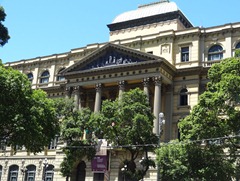 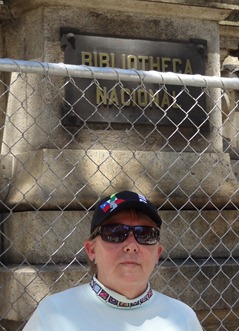 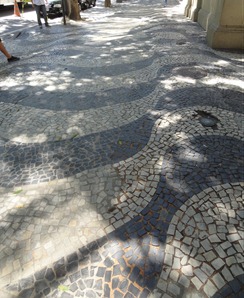 OK, I was planning to do all of Rio in one posting but this is already quite long and there is quite a bit yet to go.  So I am going to stop now, even though we aren’t really through day 1, and finish up in a second posting.

This entry was posted on February 20, 2012 by Rick. It was filed under South America Circumnavigation .