On Tuesday, March 6 we anchored at this three island archipelago about 8 miles off the coast of French Guyana.  French Guiana (“Guyane Francaise”) is not a colony, but actually a department of France with representation in the French legislature.

The three islands are popularly referred to as Devil’s Island, although their proper name is Iles de Salut (“Salvation Islands”).  One of the island is actually Devil’s Island (Ile du Diable) and the other two are Ile Ste-Joseph & Ile Royale.  All three islands in this group were part of the infamous French penal colony of Devil’s Island, but the only one that can be visited by ships is Ile Royale, the biggest of the three and the location of the prison administration.

We had to wait some time to go ashore because there was a sudden squall that made boat traffic treacherous, and then after the squall it took some time to get the ship repositioned and the tenders running smoothly again.  But we did finally come ashore and from the dock area you could see that Ile Ste-Joseph was quite close (only 650 feet separates Ile Royale from the other two islands). 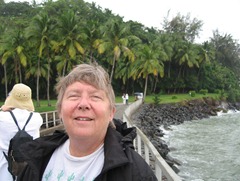 Walking along the path around the island, it was quite a lush tropical rainforest particularly thick with palm trees.  We were told, however, that when it was a prison the French kept the forest cleared so they would have a clear shot at anyone trying to escape.

In the forest we saw spider monkeys & agoutis, which look like giant guinea pigs with longer legs.  The agoutis eat coconuts, which are abundant here, among other things. 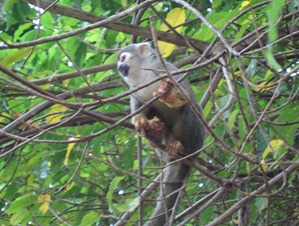 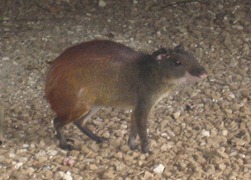 We also saw several kinds of palm trees, including coconut palms aplenty and some with red fruit that we were told were Christmas Palms. 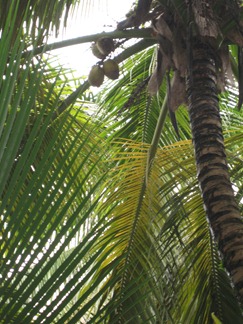 The remains, mostly ruins, of the penal colony cover a good bit of the island. It looked pretty depressing, with tiny cells, a reservoir now full of water lilies (reportedly with an alligator in residence), a hotel (converted from the old warders’ mess hall) and a cemetery for children of the warders (not a healthy place to raise children). The prisoners who died were buried unceremoniously at sea, which helped keep the sharks around to deter escape attempts.  About 50,000 of the 80,000 prisoners sent here during its 85+ years of operation died here.  Those surviving prisoners sentenced to less than 8 years had to spend another 8 years in French Guiana before they could return to France (and then only if they could pay their own fare back), while those sentenced to 8 years or more had to spend the rest of their lives in Guiana.  The French government did not stop transporting prisoners here until sometime between 1938 and 1946 (accounts we have heard differ) and did not close the facility until 1953.   The movie Papillon is set on Devil’s Island and reportedly gives a decent portrait of life there, although its author, Henri Charriere, was never actually there, even though he framed his book as an autobiography. 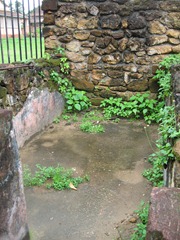 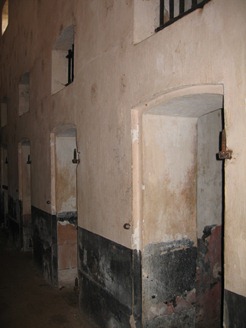 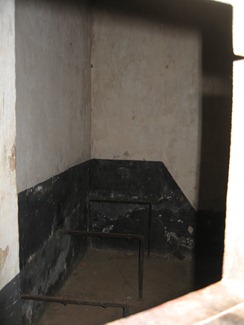 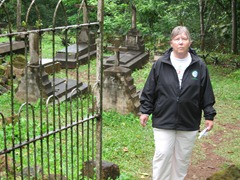 We found the idea of a hotel here a little strange, especially since there are no beaches.  If your fiancee proposes spending your honeymoon at Devil’s Island it’s probably not a great omen for your marriage.  Near the hotel we saw parrots & peacocks and we also saw a number of colorful roosters. 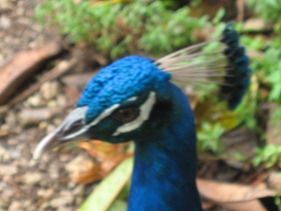 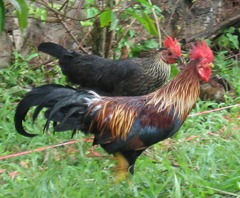 There was interesting flora as well, including the water lilies in the reservoir and some red and blue flowers near the hotel. 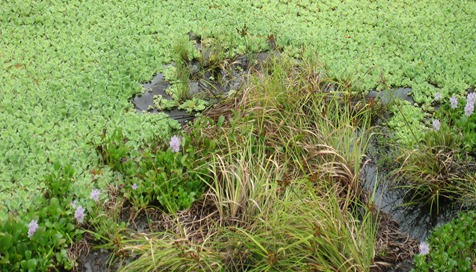 Finally we walked down around the back of Ile Royale, where we encountered a telephone booth in the rainforest (!) & some beautiful views of the surf through the palm trees. 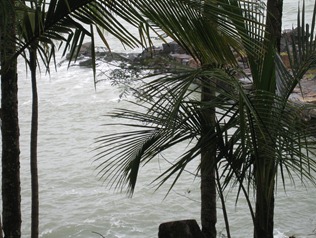 From this side of the island you can also see the actual Ile du Diable, which is where political prisoners were kept.  Captain Alfred Dreyfuss lived in a hut on this side of Devil’s Island for 5 years before the French finally admitted he was innocent of the espionage charges against him.  For those who may not know, this was one of the most notorious cases of anti-semitism in the 19th century, since it is now accepted that Dreyfuss (who went on to serve with distinction in World War I) was picked by the French military to be a scapegoat in the case because he was Jewish.  Today, Devil’s Island is inaccessible because of the strong currents & crashing surf. 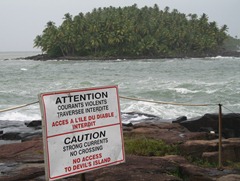 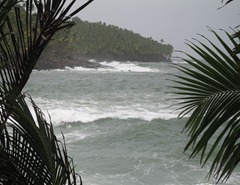 Another interesting thing here (but I don’t have a picture) is a rocket tracking station.  The French have their version of Cape Canaveral on the coast of French Guiana, not far from Ile Royale, and they have built a small station here to track the ascending rockets.  We were told that the islands are evacuated when a rocket is launched because of its closeness to the launch site (except for the monkeys, who are allowed to stay).

So, that’s it from Devil’s Island.  As I write this, we are on our way into the Caribbean Sea toward St. Lucia, and the seas have been quite rough.  The barf bags are out in their little dispenser boxes near the elevators but we haven’t seen anyone who needed them (they are probably ensconced in their cabins). But there are only two islands & 4 days left before we reach Florida and the cruise is over.  It has been a really great trip, but we are looking forward to getting home.

This entry was posted on March 7, 2012 by Rick. It was filed under South America Circumnavigation .