Early in the morning of March 25 we docked at Agadir, Morocco.  Agadir is pretty old: the Portuguese established a trading center here in the 15th Century or so, and there was a famous incident at Agadir in 1912 when the Germans sent in a gunboat to challenge the French & almost ignited World War I a couple of years early.  But in 1960 there was a devastating earthquake that destroyed more than 80% of the city & killed about 15,000 people in 15 seconds, so little remains of historic Agadir.  It has been rebuilt as a resort town, and also seems to have a busy commercial port, but there was little to see here that interested us.

So we opted instead for a land excursion to ancient Taroudant, about 50 miles inland at the foot of the High Atlas mountains.  Taroudant is a walled city that is about 1000 years old, and was the capital of Morocco for a while in the 15th or 16th century.  It was also an important trading stop on the old caravan routes.

On the way to Taroudant we saw vast areas, both flat & mountainous, that are full of Argan trees.  This is a tree that only grows in this part of Morocco, and produces a fruit similar to an olive but much harder.  We visited a women’s cooperative in Taroudant that was producing an impressive variety of oils & creams from this fruit, which is still stone ground by hand.  What was most interesting, however, is that goats actually climb into these trees to eat the fruit; we had heard of this but never seen it before.

Just outside the walls of Taroudant we stopped at a restaurant for coffee & a cookie.  We ate in a courtyard & the grounds were lush with orange trees, palms, etc. 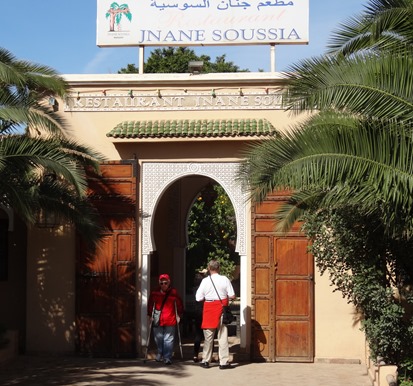 Taroudant is surrounded by high medieval looking walls with a reddish color that comes from the local soil.  The walls are somewhat in disrepair in some areas, but are pretty impressive nonetheless.  This is pretty much the signature view of Taroudant (I think we will see more of this at Marrakesh tomorrow). 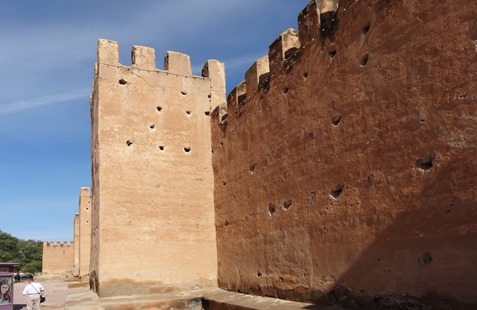 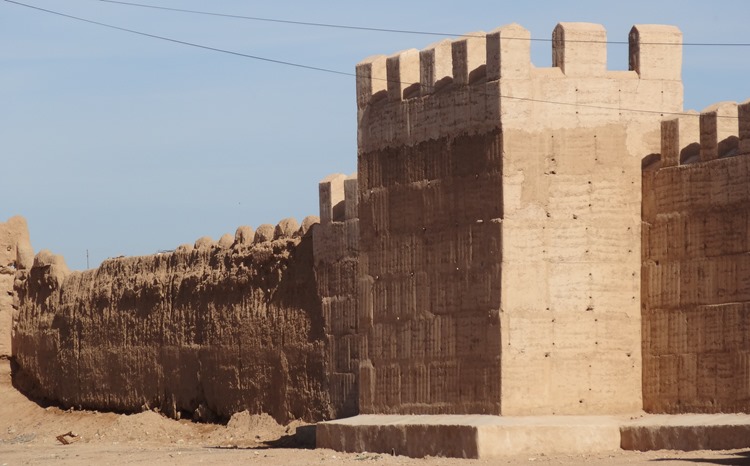 We spent most of the time at Taroudant walking around the souks (open air markets), which were labyrinthine.  It is amazing that no one was lost from the group.  Many of the vendors were nixing photos, but I got a few of the souks & of some of the wares, including spices, fruits, clothes & art objects (read the captions). 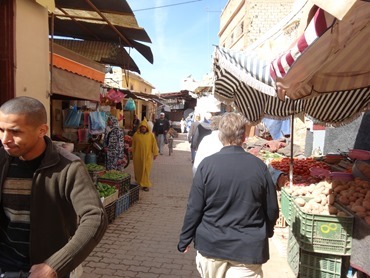 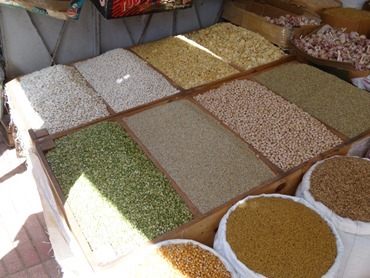 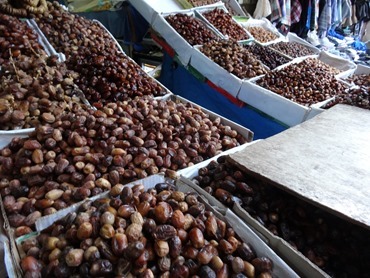 We spent some time in an artisan cooperative store that had many beautiful things, probably at good prices (if you bargain effectively), but still quite a lot of money.  And after all, how could we tell if something is really worth what they are charging?  Mary bought an unusual  pair of moonstone & silver earrings. 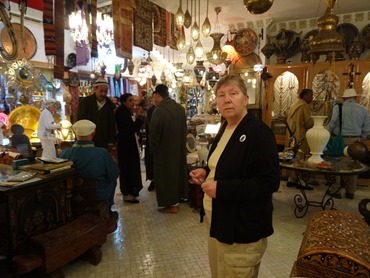 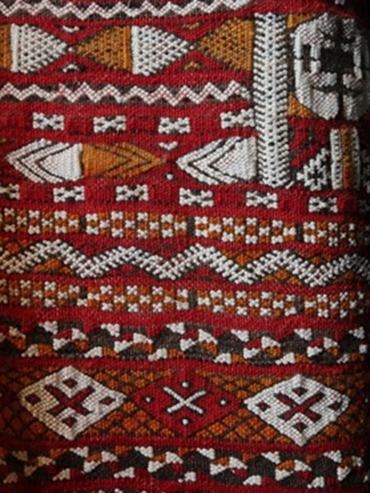 You might have noticed in that last picture that the silver piece has a star of David in the middle and Hebrew lettering on tablets at the top.  Our guide told us that, until the Arab conquest in (I think) the 8th Century, the Berbers who were the indigenous population of Morocco (she is a Berber) were Jews & Christians.  Many Jews moved to Morocco after the Spanish reconquista in Spain, and they were known hereabouts for their metalworking skills.  She says that there were many Jews living in Morocco until 1948, when almost all of them moved to Israel.  Anyway, Taroudant has a Jewish Quarter to this day (although I think it is now a geographic designation rather than an actual Jewish neighborhood).  We saw a number of items in the craft cooperative with Jewish themes & Hebrew lettering, although I doubt they are still made by Jews today.

As I mentioned, the Berbers were the original inhabitants of this area; they are not ethnic Arabs and have their own language, which is one of the three official languages of Morocco (along with Arabic & French).  The ancient Greeks called them “barbarians,” as they did anyone who didn’t speak Greek.  From this they became known as Barbary (as in Barbary pirates, of Thomas Jefferson fame), and this was later updated to Berber.  We saw many of them around Taroudant dressed in traditional robes for men & veiled outfits for women.  I only have a few pictures, since I didn’t want to offend anybody. 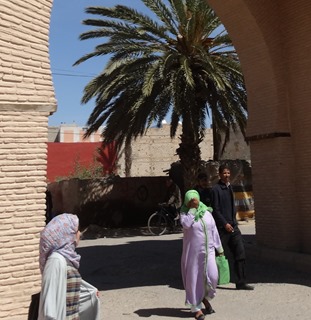 So, to finish up Taroudant, I told you we visited a women’s cooperative, & it had beautiful old tiling on the walls.  We saw a bridal boutique and some familiar looking signs with Arabic (or maybe Berber?) writing.  And a gas station selling Libyan oil. 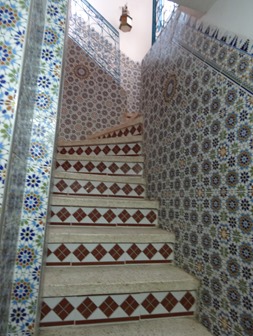 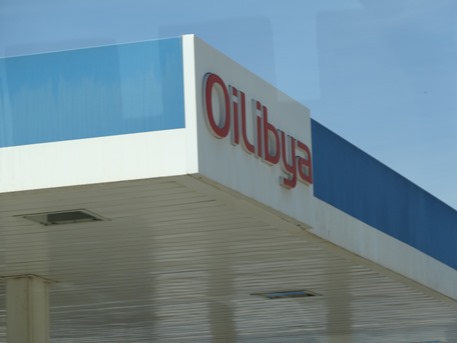 On the trip back to Agadir we passed the High Atlas mountains & some currently dry riverbeds that are called “Wadies” in North Africa & the Middle East. 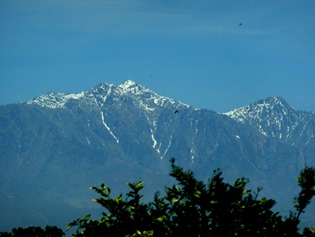 Before returning to the ship we visited the old Casbah of Agadir, among the few buildings to survive the earthquake (although its not in great shape).  It is on top of a hill, giving a great view of Agadir, and there were some guys there selling camel rides.  One of our party rode a camel, & seemed to come through it OK. 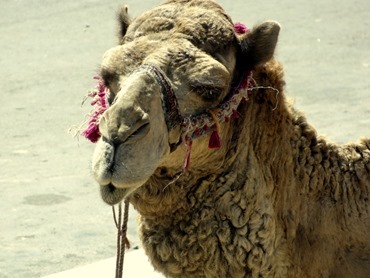 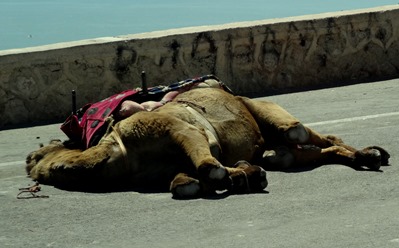 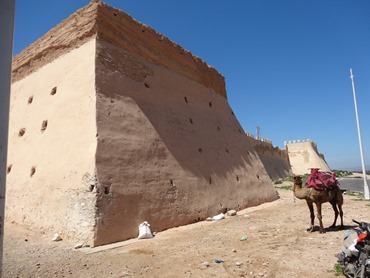 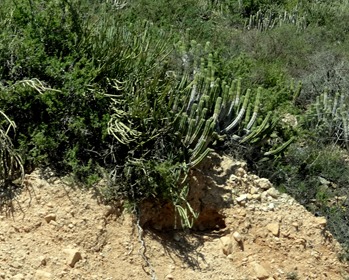 So that’s it for a very full day on an excursion that was finished by 1:30!  No towel animals, so I will leave you with some fruit art (I bet you weren’t expecting that). 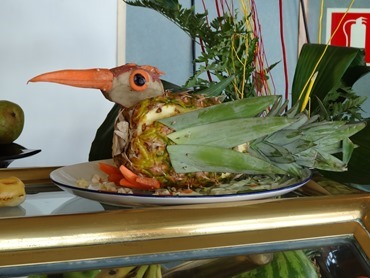 This entry was posted on March 29, 2013 by Rick. It was filed under Mediterranean cruise .