In the morning on February 20 we pulled into Darwin, Australia, a small city on the northern coast.

To reach Darwin we sailed up the eastern coast of Australia through the Great Barrier Reef area, then through the shallow Torres Strait between Australia & New Guinea.  We had a pilot on board the whole time, more to protect the reef than the ship.  The Great Barrier Reef is, at 1200 miles long and 50 miles wide, the largest living thing on Earth, visible from space.  It consists of many islands and submerged reefs of living coral populated by thousands of varieties of fish.  Captain Cook discovered it by accident.  He thought he had clear sailing a few miles after leaving shore when suddenly he ran aground & the reef tore a large hole in his hull.  Fortunately one of his sailors knew how to stretch a sail around the ship like a bandage to allow them to sail to shore in a place just north of Cairns now called Cooktown, where they spent a long time repairing it.

If you really want to see the reef (without getting into the water), perhaps an orbiting space station is the best place to go (or a helicopter).  A ship, which provides little elevation and cannot sail anywhere near a reef without endangering both the ship & the reef, doesn’t really give you much of a view.  Even from the top deck all you could see were shadows caused by the otherwise invisible submerged reefs, although the islands were obviously in view.

Our itinerary included an “anchorage” at Sherrod Island overnight, with no landings.  The Captain decided that it would be dark when we arrived & we would be leaving before sunrise, so there was no reason to stop there.  So we didn’t, & sailed on toward Darwin.

With a population of about 125,000, Darwin is the capital of the Northern Territories. It was founded in 1869 as Palmerston & renamed in 1911 in recognition of a visit by Charles Darwin & the Beagle in 1839.  Darwin Harbor is much larger than Sydney’s.  The town has been destroyed several times in recent decades.  First, the Japanese bombed Darwin 64 times during World War II. The first two, on February 19, 1942, were launched by the same task force that had attacked Pearl Harbor two months earlier, but more than twice as many bombs were dropped on Darwin.  Almost 300 people were killed & 21 ships anchored in Darwin Harbor, which was on the front lines of Australian defense against the Japanese, were sunk. The movie Australia, with Hugh Jackman & Nicole Kidman, ends with a depiction of the bombing of Darwin.

The town was rebuilt after the war, but on Christmas Eve in 1974, Cyclone Tracy hit with winds that reached 175 mph before the measuring instruments broke.  66 people were killed, 30,000 were airlifted out & 95 percent of the buildings were flattened.  The city was rebuilt again, with laws requiring stronger construction & other safety precautions that are now being loosened for some reason, so the city is mostly contemporary buildings with little in the way of old world charm.

What it does have, as evidenced by our visit, is very hot & humid weather.  This is the closest Australian city to the Equator, & you can really feel it.  While waiting in line for a bus we heard one fellow say “Darwin is Australian for hot,” and that seemed pretty much on target. Of course we were only here one day & it may be better at some other time of year.

Anyway, after leaving the ship we took a shuttle bus into town (walkable, but not an attractive option in the heat).  Our first objective was the public library, inside of the Civic Center. This is located in what used to be Chinatown, & just outside is a large Banyan tree growing since the 19th century called “the Tree of Knowledge,” where Chinese youth would sit & learn from their elders.  The Aboriginal people call it Galamarrma.  It has surprisingly survived when almost everything else in town was destroyed by the war & the cyclone.

We mentioned that Darwin was named in honor of the visit of the Beagle to this area in 1839.  In 2009, for Darwin’s 200th birthday, a set of bronze sculptures was erected in the park next to the Civic Center.  Darwin was apparently enthralled by the number of parrot species he found in Australia, so this installation consists of a semicircle of various sized ship bells, each with a different parrot species or the Beagle on top, and a bust of the young Darwin in the center on top of a replica of the ship’s bell of the Beagle.  It was quite interesting. 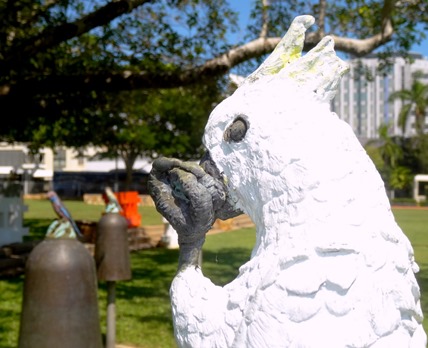 We took a local bus to the Museum of the Northern Territories, where we saw an extensive and sobering exhibit on Cyclone Tracy & what is considered the best gallery of Aboriginal art in the world.  Although the first exhibition of Aboriginal art took place in 1888, most of the gallery’s works date from the last half century.  That may be because art collectors only became interested in Aboriginal art in recent decades, & before that it was mostly created on impermanent materials like bark & skins. Today many Aboriginal artists work with canvas and acrylic paints, although some still use traditional materials, and their works are highly collectible and well cared for.  We have seen galleries of often very expensive Aboriginal art in other cities in Australia, but Darwin has by far the most.  Apparently about half of all Aboriginal artists are located in the Northern Territories.

The distinctive dot & circle designs associated with Aboriginal art only came into wide use in the 1970’s.  They often represent maps, with the circles as locations and the dots as tracks.  The old sacred designs are not shared with the public through art, but the techniques have been adapted to produce similar designs for public display.  It seems that the cross-hatched technique may be older than the dot & circle.

The didgeridoo (shown below) is a wind instrument that produces a very low vibrating tone.  It was originally used only by Aboriginal people in the northern area, and has been adopted by others in the last 50 years or so.  It was originally used only to accompany singing, but now there are musicians who use it as a solo instrument (one was on board Amsterdam teaching how to play it, but an injury to his eardrum required cancelling his public performance).  They are widely available in galleries & souvenir stores throughout Australia with colorful Aboriginal designs painted on them. 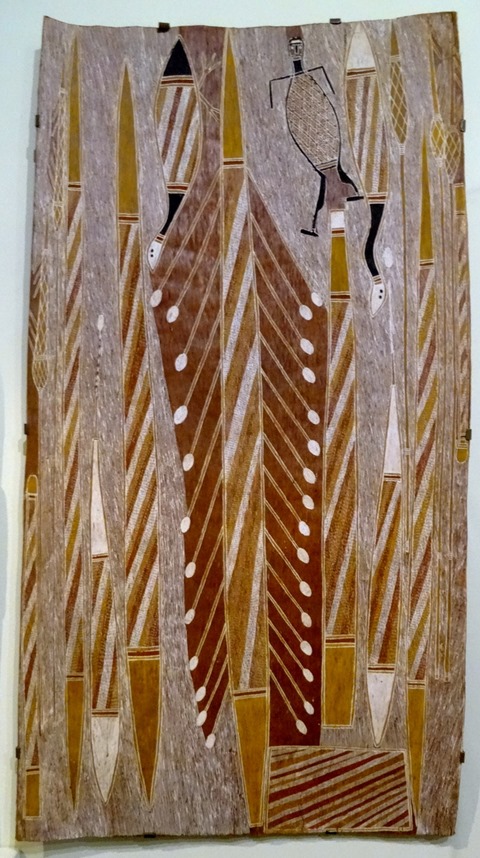 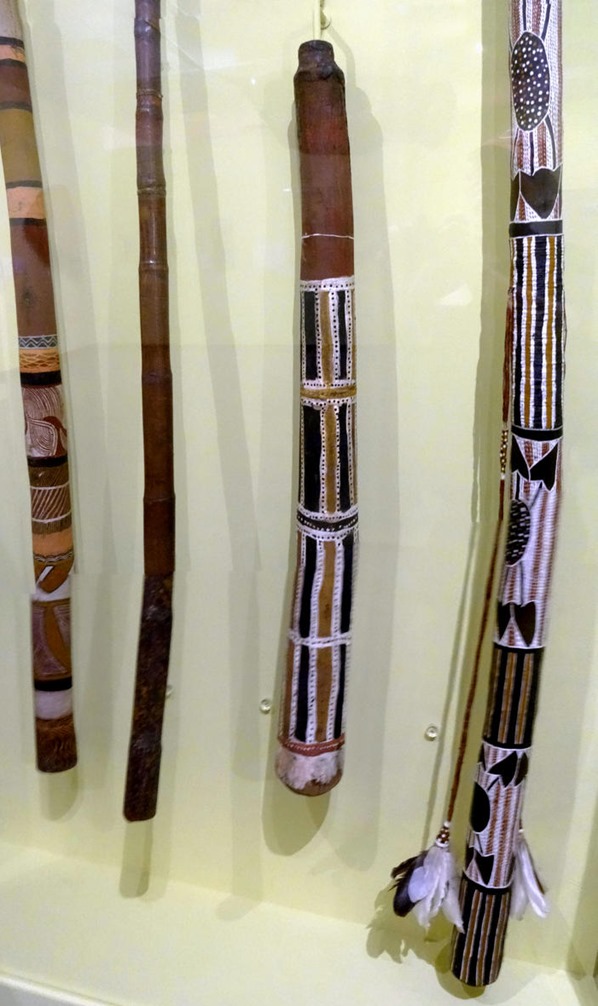 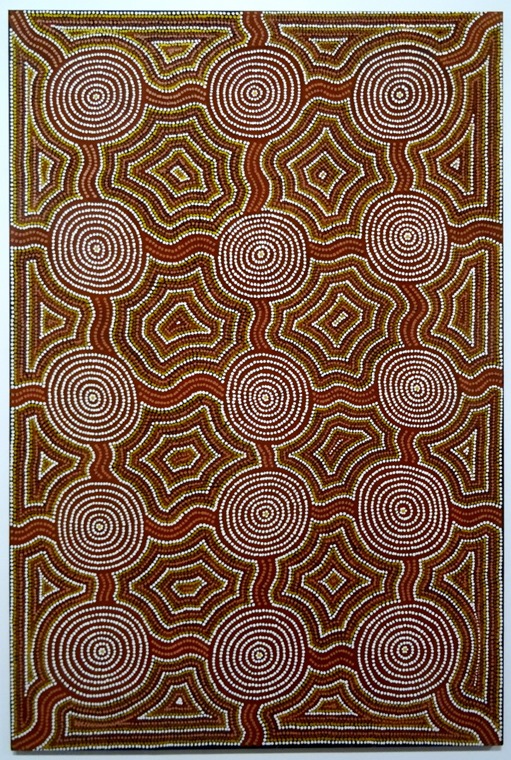 Before walking back to the bus stop we took a look at the nearby shore.  We passed the Darwin Bowls Club, where people were out playing despite the oppressive heat.  And there was also a Eucalyptus grove nearby. 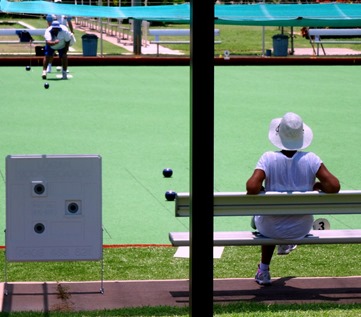 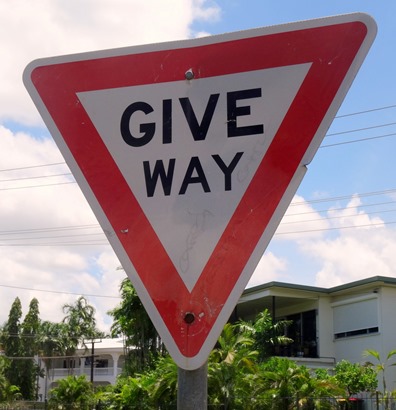 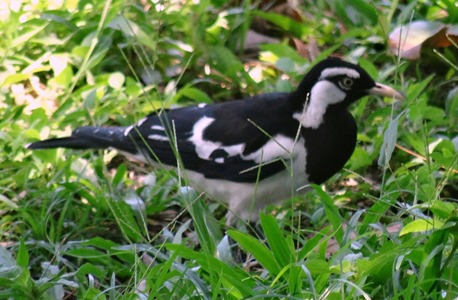 Back in town we visited a couple of buildings.  The old Town Hall, built in 1882 & destroyed in 1974 by Cyclone Tracy, is preserved as a ruin.  The Legislative Offices of the Northern Territory was built in 1955 on the site of the 19th century post office & telegraph office, both of which were destroyed in the Japanese air raids.  Called the Wedding Cake by locals because of its appearance, this building houses the Northern Territory Library (which, of course, was why we sought it out).  In the library was an exhibit about the incarceration of Aboriginal people in camps for much of the 20th century, and the forced separation of mixed race children from their families, an abominable policy.  The library had one wall preserved from the old post office as well. 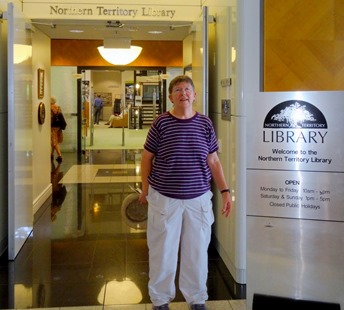 We spent some time exploring the shops & galleries lining both sides of The Mall at the center of town. While there we happened upon an Aboriginal movie star!  You may have seen David Guilipil, who had important parts in such Australian located movies as  Walkabout, Rabbit Proof Fence, Priscilla The Queen Of The Desert, and the earlier mentioned Australia.  He was standing outside an Aboriginal art gallery at a table selling his artwork (expensive!).  He is very thin & now has grey hair under his Australian style hat.  I would show you a picture, but there was a sign requesting that pictures not be taken of him.  After that we took the shuttle back to the dock, where we had to undergo metal detection before getting back to the ship.  There was a sign indicating the kinds of weapons that could not be carried into the dock (including missiles & bazookas); I wonder if anyone read that sign & felt they had to turn back?  We didn’t have any of those, so we were able to reboard the ship & set sail away from our last stop in the Antipodes toward an entirely different culture in Indonesia. 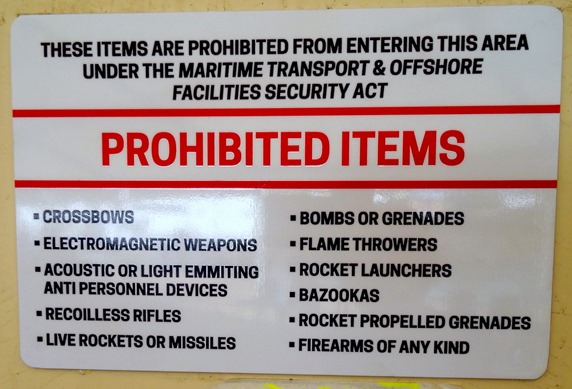 This entry was posted on March 8, 2016 by Rick. It was filed under Around The World .