February 16 found us in Cairns (pronounced “Cans,” for some reason), Australia.  It is a small city of some 130,000.  Captain Cook visited here in 1770 & he named the bay Trinity, but the first settlement was in the 1870’s after gold was discovered nearby.  Today the town is most famous as the gateway to the Great Barrier Reef, which is about a 2 hour boat ride away.  Some of our passengers spent the day going out there for snorkeling, diving & watching through glass bottom boats.

We walked into town from the ship past some bronze wildlife sculptures. 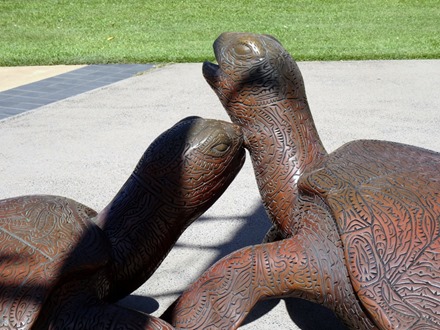 Our first destination was an unusual wildlife dome on top of the local casino. Inside was a surprisingly large number of animals, including snakes, lizards, koalas & wallabies. 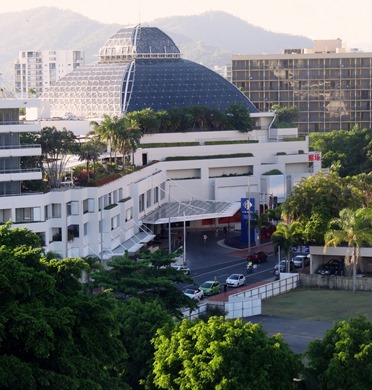 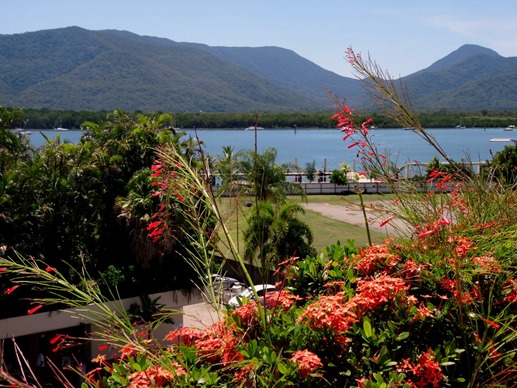 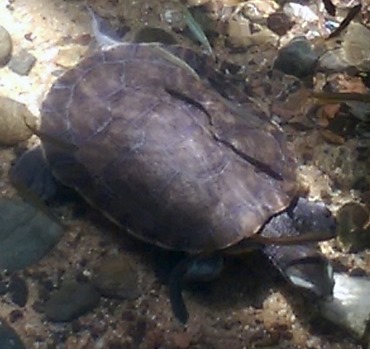 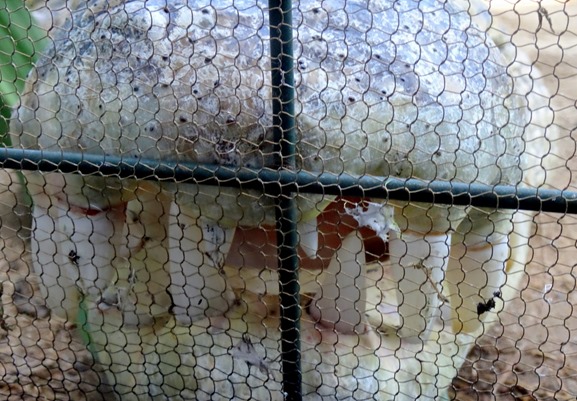 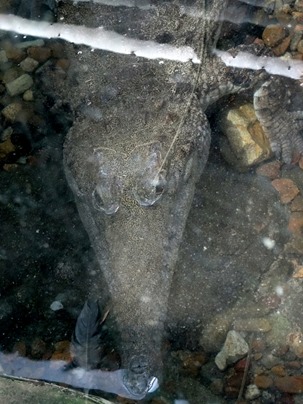 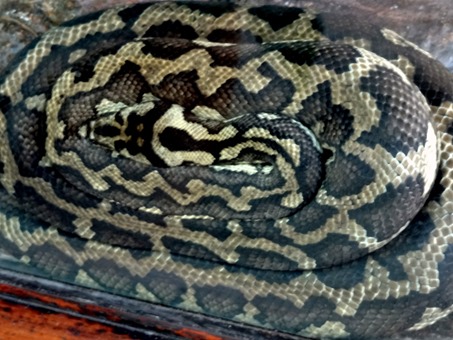 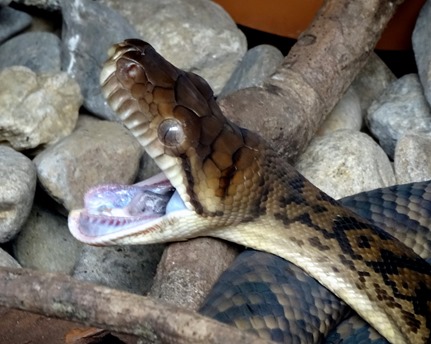 But the best part was the birds, some in cages but many flying freely through the dome. 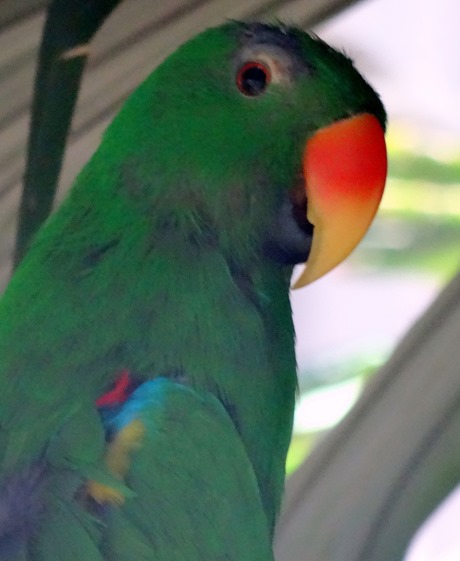 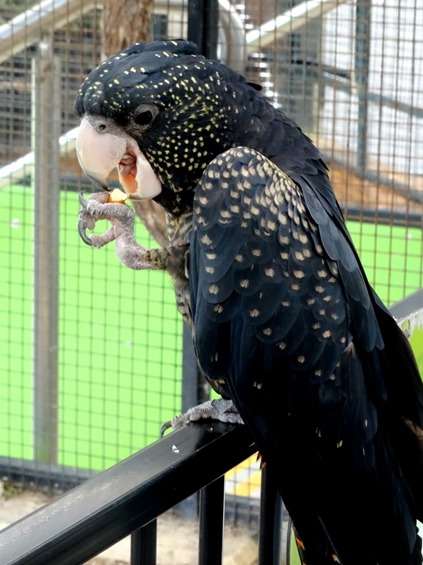 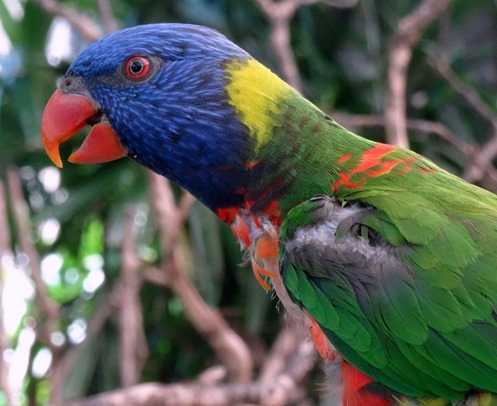 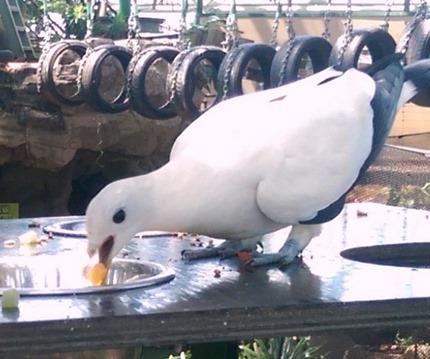 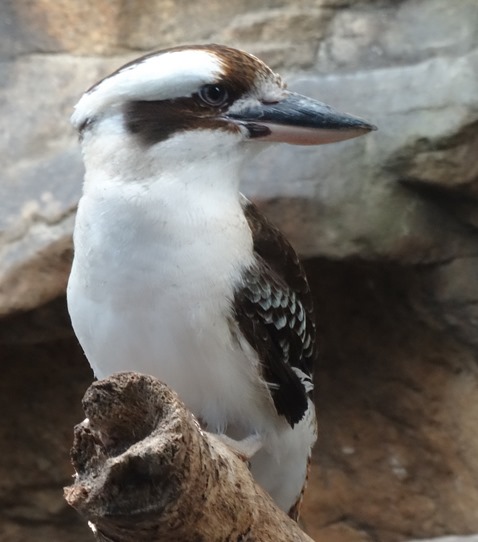 We walked along the Esplanade, a street & park running along the waterfront.  As usual around here, you can’t swim in the ocean, but they have built a freshwater “lagoon” for swimming, complete with large fish sculptures.  This area also had a craft market; the most notable thing there was an Aussie vendor who knew Rick’s hat was for Cincinnati rather than Chicago (her husband was American). This area was also decorated for Chinese New Year. Also in this park was yet another ANZAC memorial, this one originally built in 1926 and moved here later. 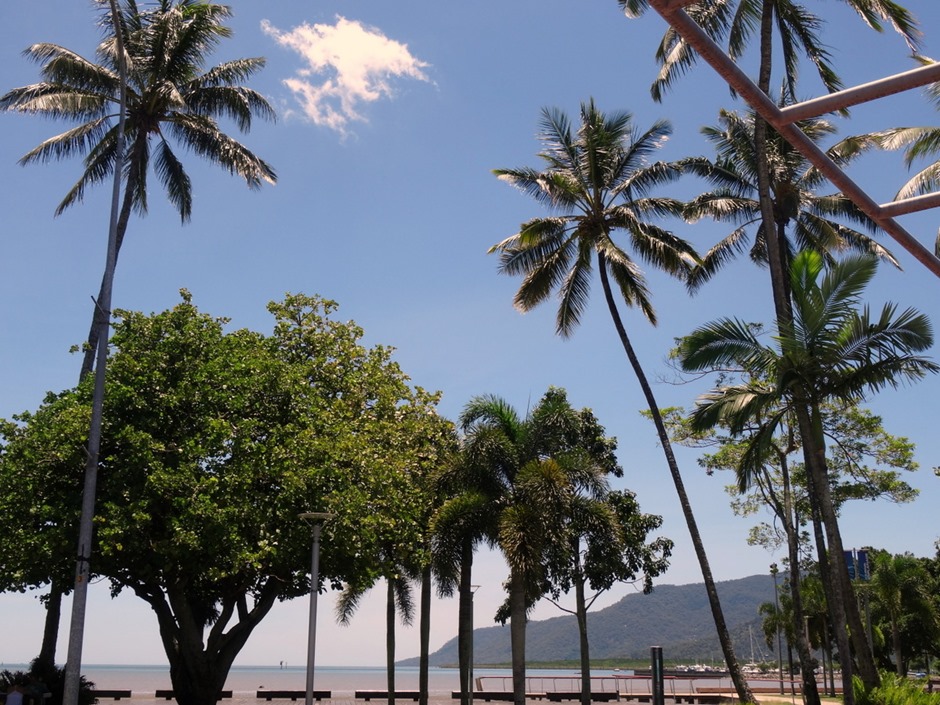 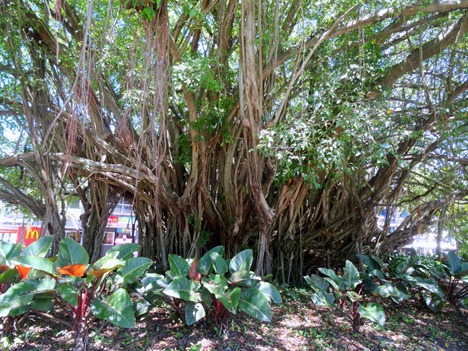 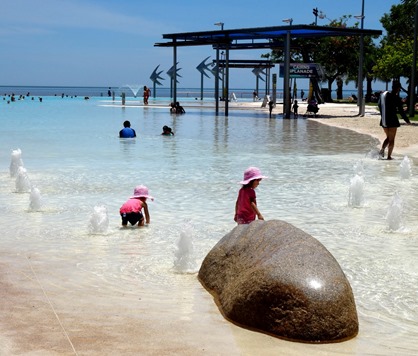 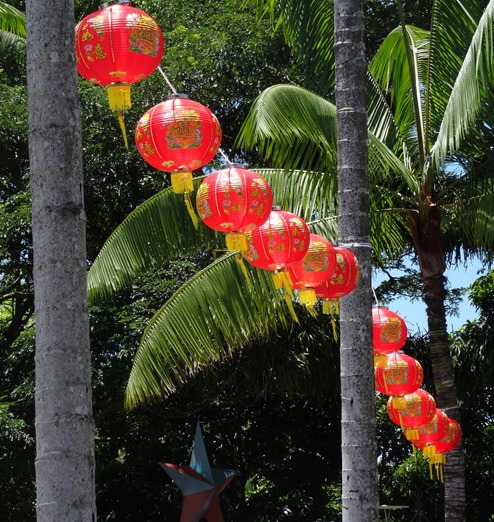 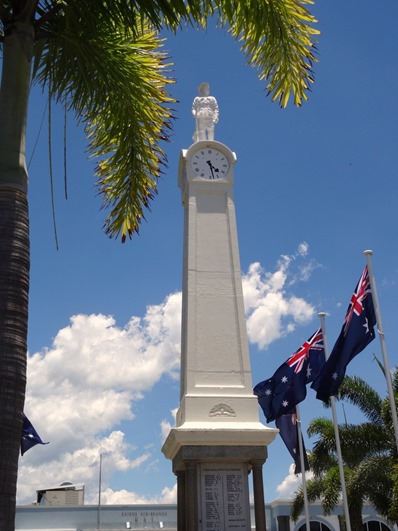 We found the library, which was nice but obviously couldn’t hold a candle to the ones we saw in Melbourne & Sydney, and then walked under the bats. 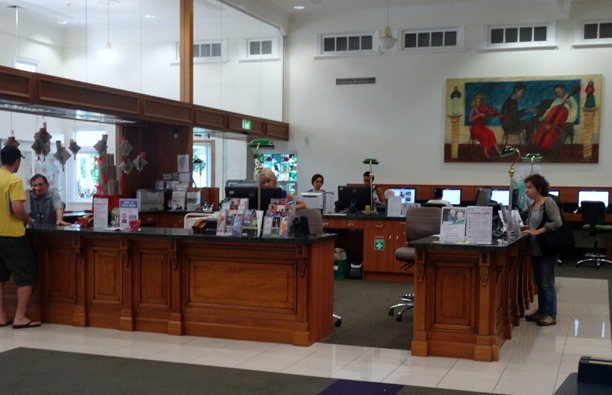 In an area near the library thousands of Spectacled Flying Fox bats hang from the trees during the day.  At dusk they all fly away at once, filling the sky (but we were gone by then, unfortunately).  They are not asleep as they hang; the whole tree seems to vibrate with their sound & constant movement (yes, it’s a little creepy).  These bats feed on flower nectar rather than mosquitoes.  The sidewalk under the trees is covered in bat guano, & we were wondering how they do that hanging upside down without it getting all over them.  The answer is that they turn around & hang by their thumbs when defecating . . . so tidy! 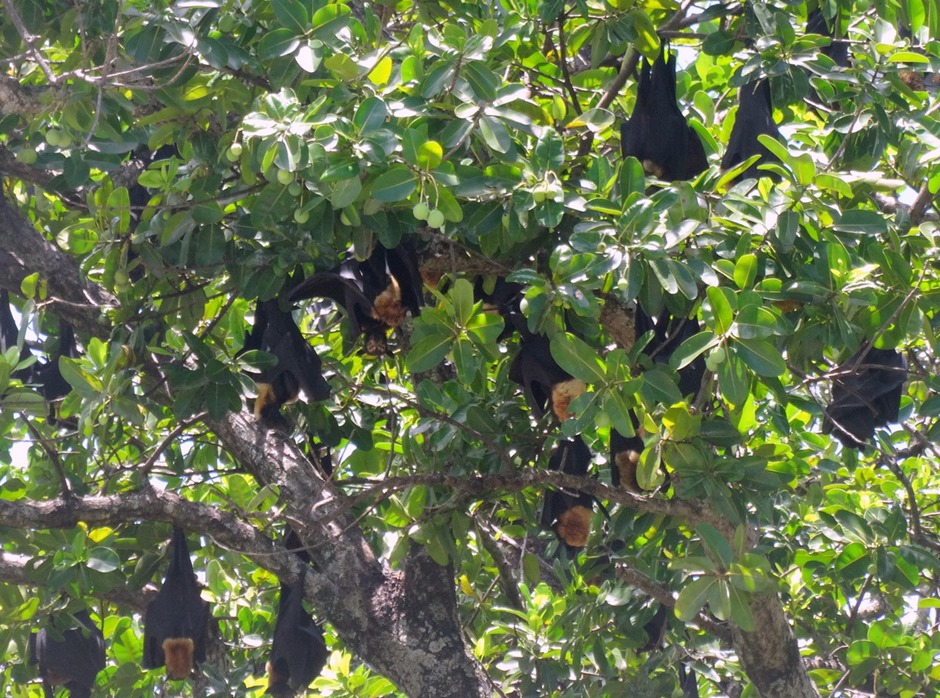 Our next objective was St Monica’s Cathedral, which had been recommended by Barbara, the Amsterdam’s location guide.  The tourist information assistant on the pier had never heard of it & the person she asked about it gave us a location on the map that turned out to be a huge construction hole (we were afraid that maybe it had been torn down).  A librarian gave us new directions, but that took us to St Monica convent school.  Finally, someone on the convent grounds was able to direct us to the right spot.  And it was well worth all the effort to find!  This is a small contemporary church, built to commemorate the Battle of the Coral Sea which could be seen on the horizon from Cairns. It really doesn’t look like much from the outside but the stained glass windows inside are fabulous.  Along the two long walls inside are a series of stained glass windows that show a continuous diorama of a scientific view of the creation, beginning to the left of the altar with views of outer space modeled on NASA’s Hubble telescope photos, including volcanoes, & continuing on the wall leading back to the altar with depictions of trees, Australian animals & people. Quite an artistic triumph, the photos do not begin to convey their impact in person.

Surrounding the front entrance on the wall opposite the altar are the Peace Windows, created for the 50th anniversary of the end of World War II, which started 50 years of peace in the Pacific. The windows above the entrance include not only a cross, but also a rainbow & a dove of peace & fish playing in the water below.  The window to the right of the door is the Chaos window, including destroyed instruments of war lying on the seabed, along with three helmets for the Americans, Japanese & Australians who fought here. To the left of the door is the Rest window, with a more peaceful view of war machinery lying on the ocean floor, including the USS Lexington at top, an American Wildcat plane in the middle & part of a Japanese bomber at the bottom.  The Battle of the Coral Sea was the first naval battle in which the ships were too far apart to fire on each other, the battle being fought entirely with planes launched from aircraft carriers. There is a lot more symbolism in these windows, but I will spare you all that.

We headed back to the ship, but before we get there we have to show you the flowers.  In addition to many interesting flowers, we saw palm-like trees with bright red trunks, a new one for us.

Finally it was time to sail away from Cairns & head for the Great Barrier Reef.  Later, at sea, there was a dramatic sunset. 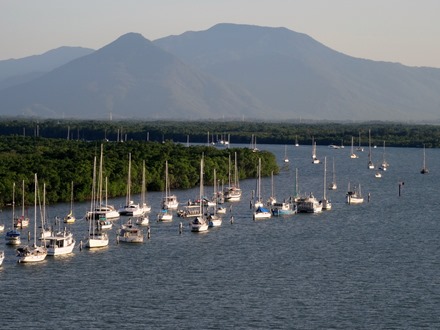 This entry was posted on March 6, 2016 by Rick. It was filed under Around The World .