We spent January 28 cruising along the beautiful Chilean fjords.  The bottom part of South America is riddled with fjords, channels and other waterways.  The biggest is the Magellan Channel, discovered for Europeans (indigenous people were already living there, of course) during his voyage around the world in the early 16th century.  But we didn’t get there until later.

Our itinerary said we would visit a glacier here, either El Brujo or Amalia.  In 2012 we had visited Amalia Glacier during the Chilean Fjords part of our trip, which you can see here:

This time Captain Schuchmann, who, happily, goes out of his way to show us all the sights during scenic cruising days, took us to visit both glaciers.  We visited El Brujo first, right around sunrise.  Having sailed down the Sarmiento Channel into Peel Fjord we turned into Asia Fjord, at the end of which is El Brujo glacier, part of the Southern Patagonian Ice Field.  The glacier is more than a mile wide.

As you can see from the pictures, the day was quite overcast, so if the ice field is visible from the water we didn’t get a chance to see it.  But the clouds moved a lot so that, as the above pictures show, sometimes the ice mountain right above the glacier glowed in the rising sun and sometimes it was hardly visible.  As always with tidal glaciers, the blue & white ice front studded with crevices made for interesting patterns.  The water in front of the glacier and surrounding the ship was filled with floating growlers and even smaller pieces of ice. 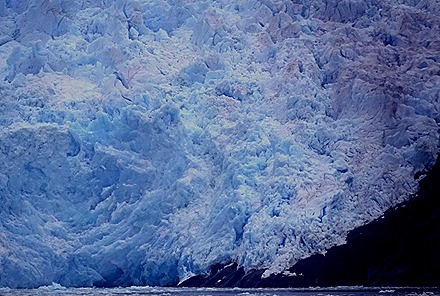 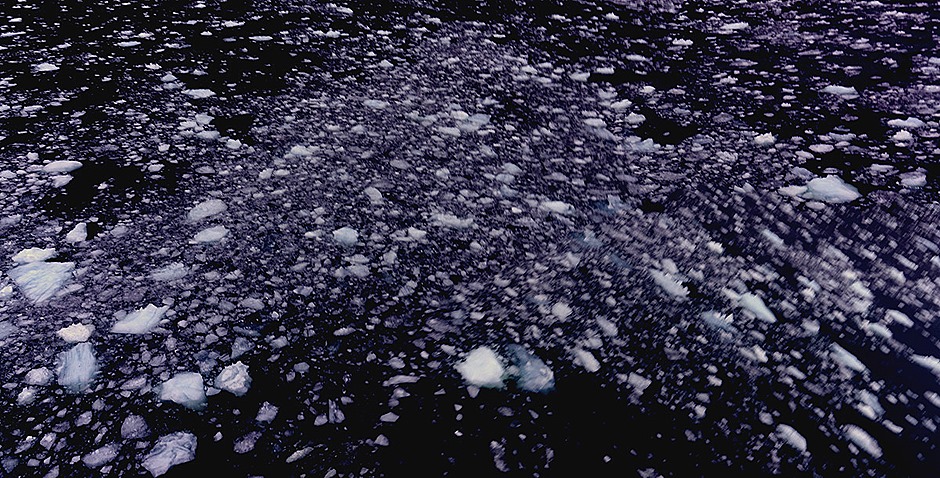 We stayed a while at the glacier as the Captain turned the ship 360 degrees to give everyone a good view.  Then we sailed away from the glacier and out into the fjord.

We sailed out into Peel Fjord, then turned into the Amalia Fjord, at the end of which is Amalia Glacier.

The clouds were still heavy, but they were high enough to see the mountainous ice field behind the glacier and the separate wavy channel of ice descending on the right.  The Amalia Glacier is more than 2 miles wide and has receded more than 5 miles since 1945.  Actually, just about all of the Chilean glaciers are receding at different rates and climate change will likely accelerate that.  There was no floating ice at Amalia during this visit, unlike last time.  We were told that was because the line of rocky islands you can see on the right side was preventing the fallen ice from spreading.  We were skeptical, since the ice wasn’t spreading from the left side either, but we can offer no better explanation. 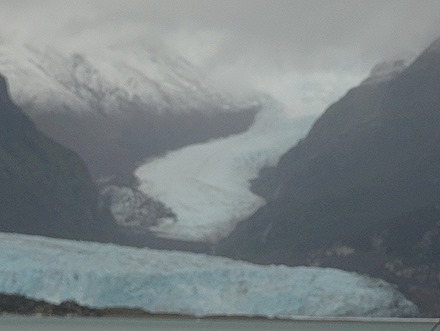 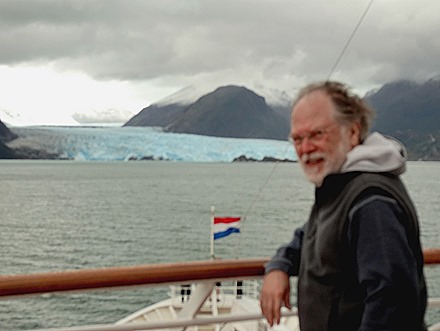 The snow capped mountain on the right that the glacier is curving around is the Recluse Volcano.  Its last recorded eruption was in 1908 and the glacier is slowly eroding its sides away.  The volcano is about 3300 feet high.

After viewing the glacier (it was cold out & intermittently drizzly) we went on to breakfast in the warm & enclosed dining room.  We could still see the glacier from the windows as the captain again slowly rotated the ship to give everyone a good view before sailing on. 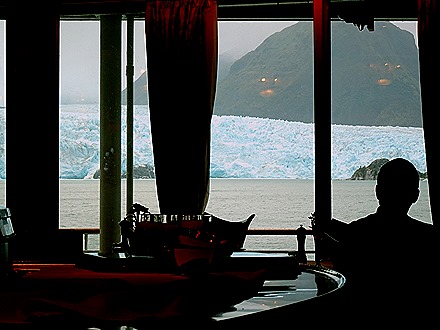 Leaving the fjord we turned south and sailed down the Sarmiento Channel.  It was lined with magnificent mountains most of the way.  The highest peaks in this area reach about 1500 feet or more.  As you can see the weather was pretty overcast most of the way.

Sometime after noon we sailed into the Smyth Channel, which is wider than the Sarmiento.  We aren’t sure just when that happened or which pictures are from which channel, so we are making our best guess.  More mountains here, reaching higher than those lining the Sarmiento.  When you see each of these vistas alone it is pretty impressive, but when they appear one after the other in succession it is less so.

The weather got better in the afternoon, with intermittent sun among the clouds.  We passed a number of very small lighthouses, which we have read are there to steer ships away from dangerous submerged rocks & shipwrecks.  We didn’t hit any of them. 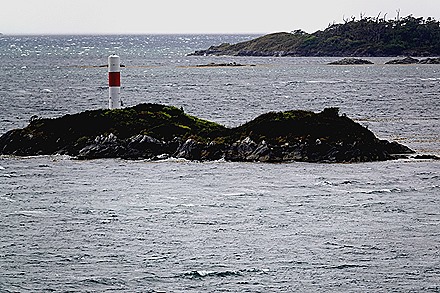 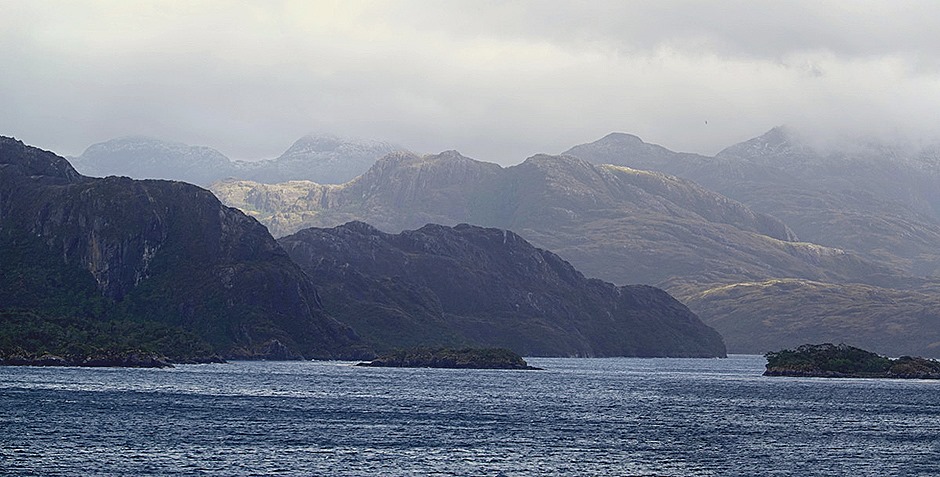 Shortly before we reached the Strait of Magellan (& we left for dinner), we came upon a visible shipwreck for which we needed no lighthouse (although one was nearby).  This is the Santa Leonor, which ran into the rocks on March 31, 1968, apparently because of pilot error (at least that is what the court concluded in the subsequent litigation).  No lives were lost among the few passengers and crew but the ship and its entire cargo were unsalvageable.  The ship started life in 1944 as the USS Riverside and participated in the very end of the war against Japan.  It was decommissioned in 1946 and sold several times before its fateful encounter with the rocks in 1968.  It still sits there, more than 50 years later, rusting in the sun and water, a startling sight for those passing by.  It is interesting how different it looks from different perspectives as you pass it. 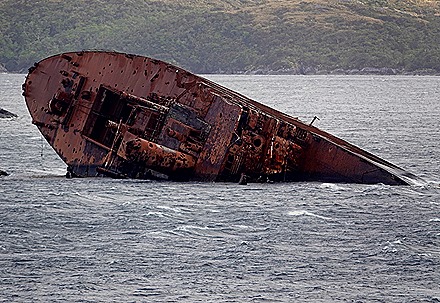 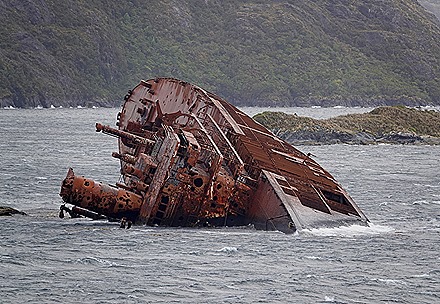 So that is it for today.  As we had dinner and slept, we sailed down the Strait of Magellan toward Punta Arenas, our last stop in Chile.  We will leave you here with a picture of a couple of the penguins on duty in the Lido restaurant today and a towel animal.