We woke up on January 30 in our last Chilean port:

Founded in 1848,, Punta Arenas is the southernmost city in Chile.  With a population around 130,000, it has often claimed also to be the southernmost city in the world but Ushuaia, Argentina, is further south.  Punta Arenas has previously fudged this, calling Ushuaia a town rather than a city, but with Ushuaia growing by leaps and bounds over the last decade this position is becoming ever harder to maintain with a straight face.

Punta Arenas sits on the Strait of Magellan, fist discovered for Europeans in 1520 during Magellan’s circumnavigation of the globe.  Running 534 miles from the Atlantic to the Pacific, the Strait separates the island of Tierra del Fuego from the mainland.  Until the Panama Canal opened this was the main route from the Atlantic to the Pacific oceans and Punta Arenas was an important refueling stop for ships making that journey.  This was particularly lucrative during the California gold rush.  After starting out as a penal colony, Punta Arenas grew through the influx of immigrants from Spain, England, Germany and Croatia, among other places, and by the end of the 19th century it was a major producer of lamb and wool.  Today it benefits from the tourist trade and is an important jumping off point for trips to Antarctica.

When we visited here in 2012 we visited a Magellanic penguin colony at a place called Otway Sound.   You can see that here:

But the penguins have mysteriously disappeared from Otway and this time we decided just to walk around the town instead.  It was cold and windy, even in the middle of summer, and you can see in the pictures that follow that we were bundled up.  As we left the port, though, we passed another passenger out in shorts and a tee shirt.  As we began walking up a hill toward the center of town we came upon a plaza with a statue of Bernardo O’Higgins, considered the liberator of Chile.  Nearby was a plaque stating Chile’s claim to the Antarctic peninsula (which we would soon be visiting) in a pie cut shape all the way to the South Pole.  Some seven countries claim sovereignty over parts of Antarctica, but all of these claims were put on hold by the Antarctic Treaty of 1959.  All of the claiming countries signed the agreement, which sets aside Antarctica for scientific research and forbids military activity there.  But Chile still maintains the claim, in case the treaty lapses or is changed. 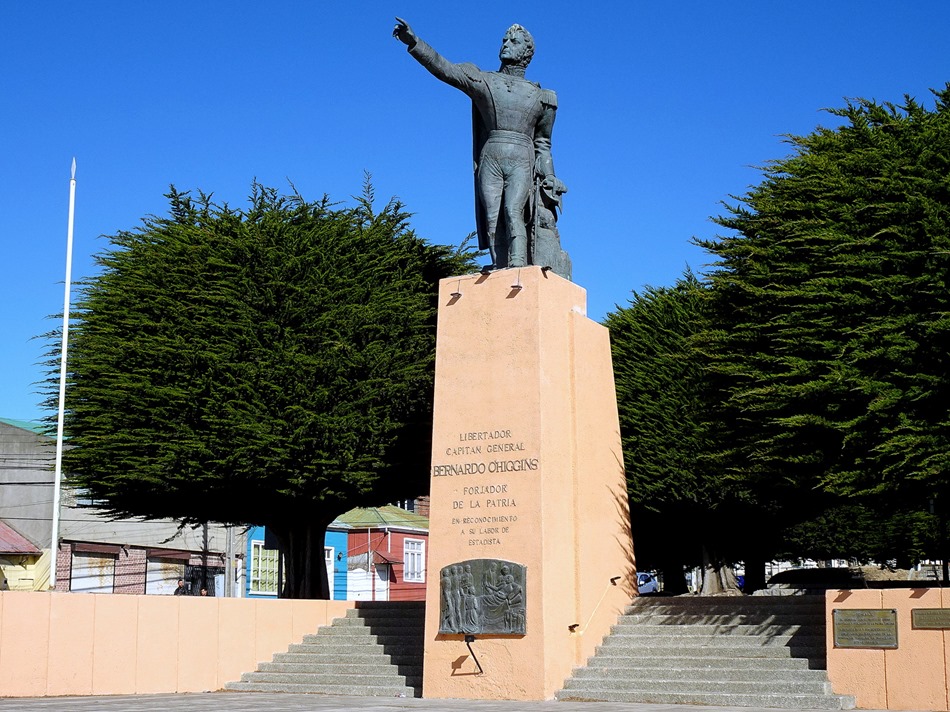 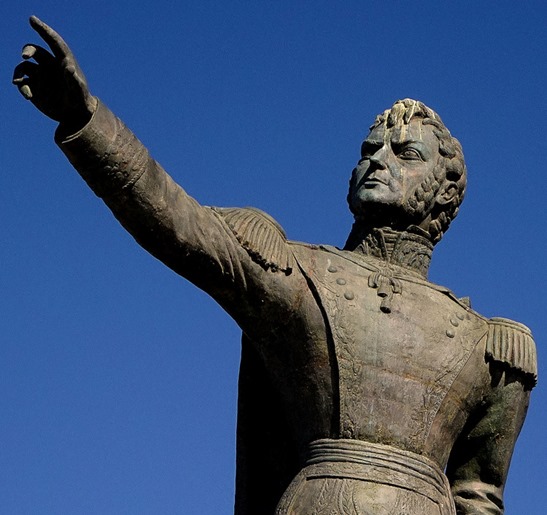 At the top of the hill we found the very green Plaza de Armas, also called Plaza Munoz Gamero.  It is supposed to contain a bustling handicrafts market, but not on the day we were there.  Maybe it was too windy.  What it does have in the center is a monument to Ferdinand Magellan, the leader of the first European expedition that came through these parts.  Magellan stands on top facing the Strait with his eyes toward the sky, with several Fuegian Indians arrayed around the base.  The legend is that kissing (or rubbing) the foot of one of the Indians gives good luck and/or ensures that you will return to Punta Arenas, and sure enough one foot is shiny bronze with the patina worn off.  Asleep at the foot of the monuments were some stray dogs, not an unusual sight in south western South America. 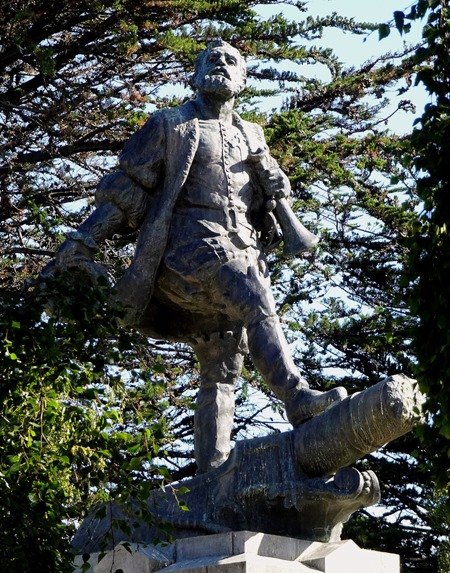 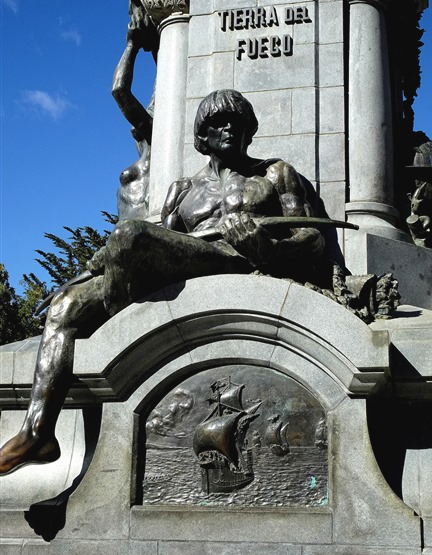 The plaza is surrounded by impressive old buildings.  Across the street is the Sacred Heart Catholic Cathedral, built in the 1890’s.  It is modest for a cathedral.

On another corner is the Sara Braun palace.  The Braun family were Jewish immigrants from what is now Latvia.  One daughter, Sara, married a wealthy Portuguese shipper & sheep farmer and when he died in 1893 she took over the businesses.  She was a leader in the community and died in 1955.  Her house is one of the best examples of architecture at the height of the sheep farming boom.  Today it houses a hotel and a restaurant. 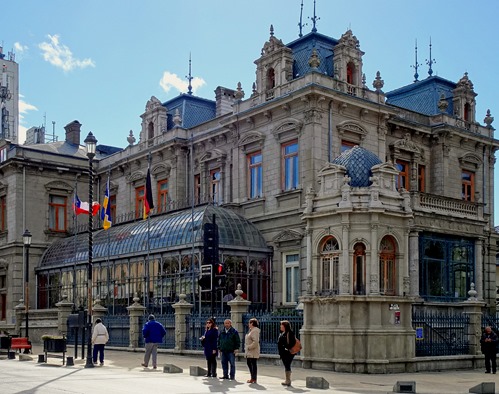 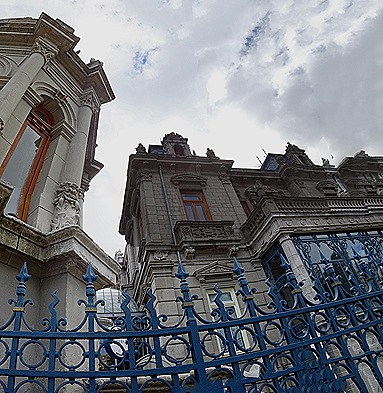 Another old house, now the town hall, sits nearby.

We walked quite a way to find the library, in a largely empty neighborhood away from the center of town.  And while it is always good to find that a town has a library (not every one we visit does), this one was kind of drab and we didn’t see many books in it.  Great statue near the entrance though!

Mirador Cerro De La Cruz is a scenic overlook high on a hill behind the main part of the city.  We walked up a steep hill, then a couple of long stairways to get there.  There was a sweeping view of the city and the Strait, including our ship at the dock.  We picked out the tower of the cathedral as well. 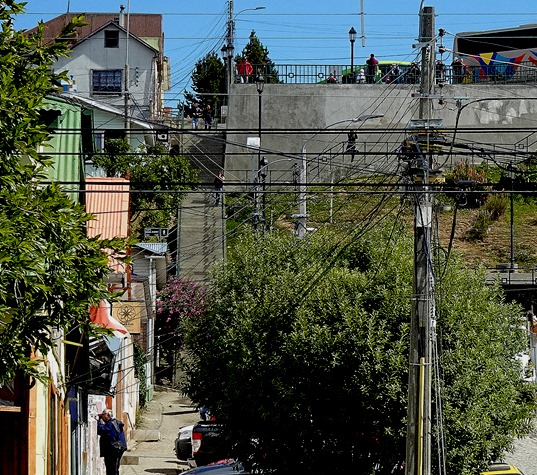 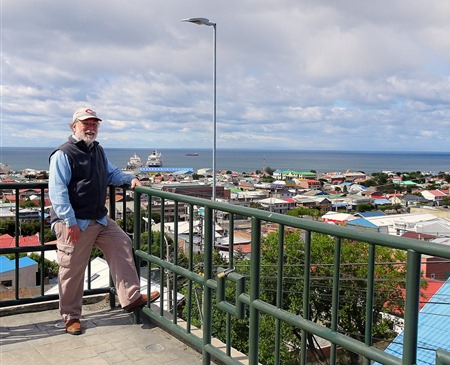 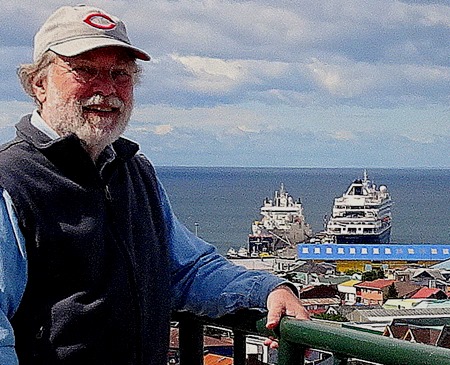 On a landing just below the very top was a round mosaic design consisting of indigenous people of the area.  I have added a couple of pictures that show what these people looked like, wearing nothing but paint and masks (and its really cold here!).  We stayed here a little while, not only for the view but also to catch our breaths!

The municipal cemetery of Punta Arenas is about a 9 block hike north of the central plaza.  First opened in 1894, it contains a number of elaborate crypts of the leading families of the time interspersed with rows of simpler graves outlined in stone for less illustrious residents.  The grounds were donated by Sara Braun & today it is named after her.  An entry portico and walls were added in 1919.  Sara Braun reputedly requested that when she died she be the last person to pass through the main entrance, and so that entrance has been closed since 1955.  You have to enter through a side portico, which contains a large oil portrait of Sara Braun.  The cemetery is decorated with rows of carefully pruned cypress trees, some with wild tops that may be intentional or maybe just haven’t been pruned yet.  This was named by CNN in 2012 to be one of the world’s 10 most beautiful cemeteries. 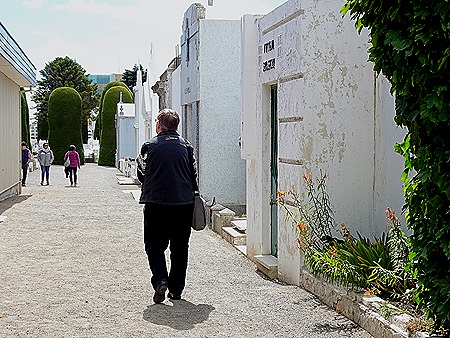 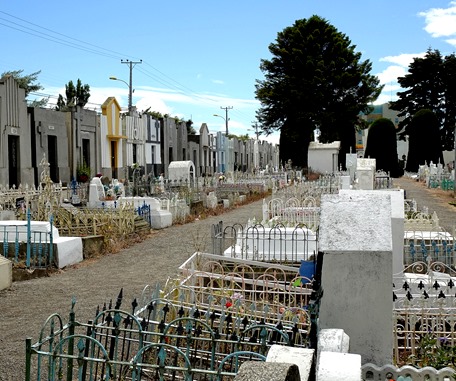 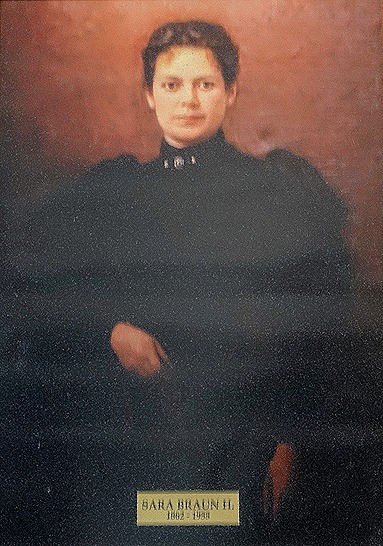 Perhaps the most interesting item in the cemetery is the monument to an “Unknown Indian.”  It seems that in 1929 a locally formed marble company decided to start a quarry on Diego de Amagro island, which was inhabited by small groups of Alacalufe Indians.  They left two employees to guard the site while the ship returned to Punta Arenas to recruit workers.  The guards were attacked by Indians, one of them killed on the spot and the other hiding out in the woods until the ship returned.  At the campsite two bodies were found, the company employee and an Indian.  They were returned to Punta Arenas and, since no one claimed the bodies, they were buried in the cemetery in a single casket.  Some time later a small headstone was erected reading “Unknown Indian.”

People began leaving burning candles and offerings of money and other things at this grave, along with written thanks for the Indian supposedly having granted favors, such as recovered health or financial security, but many left more ambiguous.  In 1969 a new monument was built, with a life size bronze statue of an Indian at the center of walls covered with thank-you plaques and a secured box for monetary offerings, many of which had been stolen in the past.  When the casket was exhumed to be moved to the new location it was discovered that there were two skeletons, neither of which could be identified.  So they were buried together again under the new monument.  People still come to pay their respects, pray, leave offerings and apparently touch or kiss the Indian’s hand, which is shiny and patina free.  When we approached it there was a woman on her knees in front of the statue apparently praying, and you can see in the picture that flowers had been left there.  On the ground in front of the statue is a plaque with a poem, which reads in English:

from the mists of doubt

and lies here sheltered in the 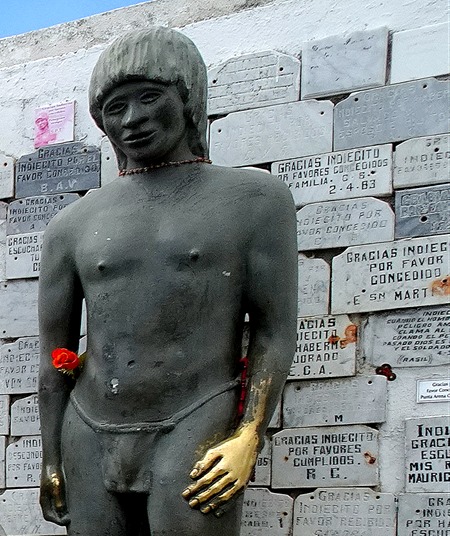 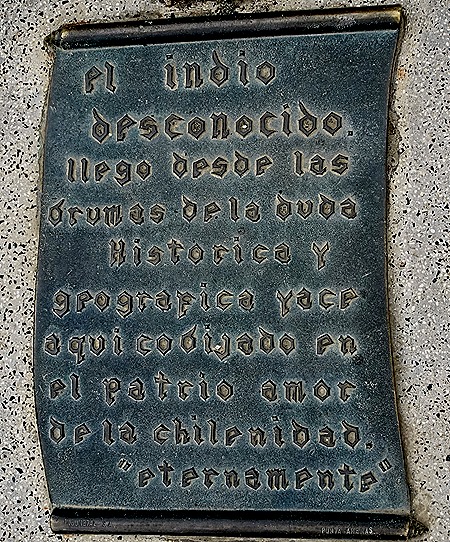 We left the cemetery in a bit of a hurry because it began to rain fairly hard.  When it let up we stopped in a café a couple of blocks away for lunch and to await the end of the rain.  We had the local Austral beer, brewed at what is billed as the southernmost brewery in the world.  We couldn’t understand anything being said in the café, but it was interesting to watch the Chilean news on the tv as we sat there.  After lunch it was sunny again, so we strolled town toward the waterfront and came up a monument to Chilean national hero Arturo Prat, who seems to have a statue in every city in Chile.  Nearby was another plaque with a map setting out Chile’s Antarctic claims. 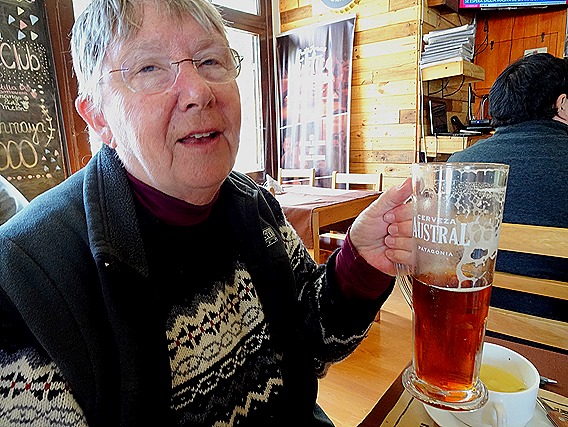 The first thing we encountered at the waterfront was a monument built in 2014 to the “trip of the schooner Ancud,” which first laid claim to this region for Chile in 1843.  It depicts the landing boat apparently pushing aside (or being helped by?) some sea nymphs as it heads for shore.

As we walked along the waterfront we passed, in addition to the sign at the beginning of this episode, a large mural on buildings across the street from the water.  On the water side was a host of cormorants, and possibly other birds, on the shore and on top of an old dilapidated dock no longer connected to the shore. 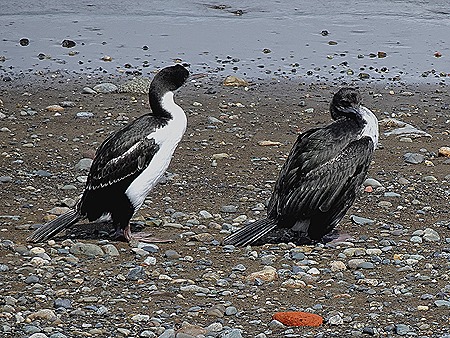 We reached the port (named for Arturo Prat) before long.  Outside was a small green clock tower.  It is apparently an antique with windows showing the works and additional information in addition to the time.  As we entered our dock we passed a large sculpture of a whale’s tail, next to which was a guy dressed up in a penguin suit.

From the ship, after we reboarded, we had a good view of the whale tail with the penguin suit guy, and also of the cormorants crowded together on the old docks.  This was a tiring day, so we were glad the next few days would be sea days.