Founded by the Portuguese in 1616 as a village by a fort built to protect the Amazon from incursions by other European nations, Belem (Portuguese for Bethlehem) enjoyed a golden age in the late 19th and early 20th centuries as the financial center for the rubber boom at a time when the Amazon was the only rubber source in the world.  Today it is a vibrant and interesting city of 1.5 million (2.5 million in the metro region).  The city sits on Guajara Bay, about 60 miles up the Para River, which is one of the ocean outlets of the Amazon.  We spent March 5 here.

When we visited Belem in 2012 we anchored at a village downriver and had a fairly long shuttle bus ride to reach the city, where we were dropped off at Estacao das Docas, a set of old warehouses that has been renovated into a restaurant and shopping complex.

But this time we anchored in the bay near the old city and tendered directly to the Estacao das Docas.  It was a much nicer day this visit as we headed out to see this part of the old city. 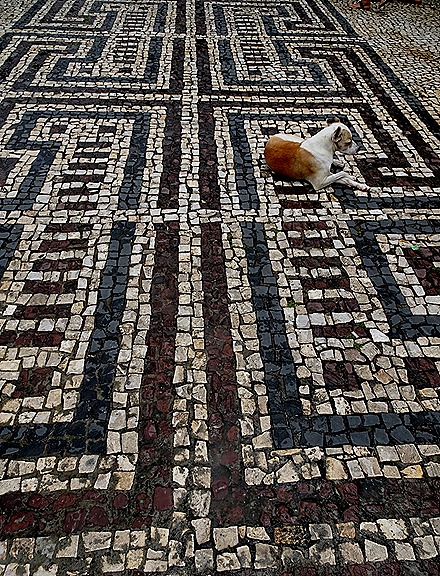 Not far away is Visconde do Rio Branco Square.  The main attraction here is the Igreja Nossa Senhora Das Merces (Church of Our Lady of Mercy).  Originally built of mud in 1640, the current stone structure was erected on the same spot in 1753.  It fell into disuse during the 19th century, then was restored and reopened in 1913.  It is badly in need of restoration again.  A service was in progress when we visited so we did not go inside.

Jules Verne published a book in 1881 called Eight Hundred Leagues On The Amazon.  It is about a raft trip from Iquitos down the river to Belem, a distance of about 1300 miles.  We came upon a plaque about Verne, although it was in Portuguese so we couldn’t read it (if you can read Portuguese, it would be nice to leave a translation in the comments).  It turns out that Verne never visited Brazil, but in the book he did describe the sighting of this church from the river:

“At length there appeared on the left Santa Maria de Belem do Para—the ‘town’ as they call it in that country—with its picturesque lines of white houses at many different levels, its convents nestled among the palm-trees, the steeples of its cathedral and of Nostra Senora de Merced, and the flotilla of its brigantines, brigs, and barks, which form its commercial communications with the old world.”

You can, indeed, see the steeples of this church from the river, even today.  In the center of this square there is a statue, but not of Jules Verne.  It is of José da Gama Malcher, a local doctor and politician.  It was erected in 1890, a few years after his death.  In front of the plinth is a figure of a person designed to be writing the inscription on the statue, but someone has helpfully added some ugly graffiti that now looks like what the figure is writing. 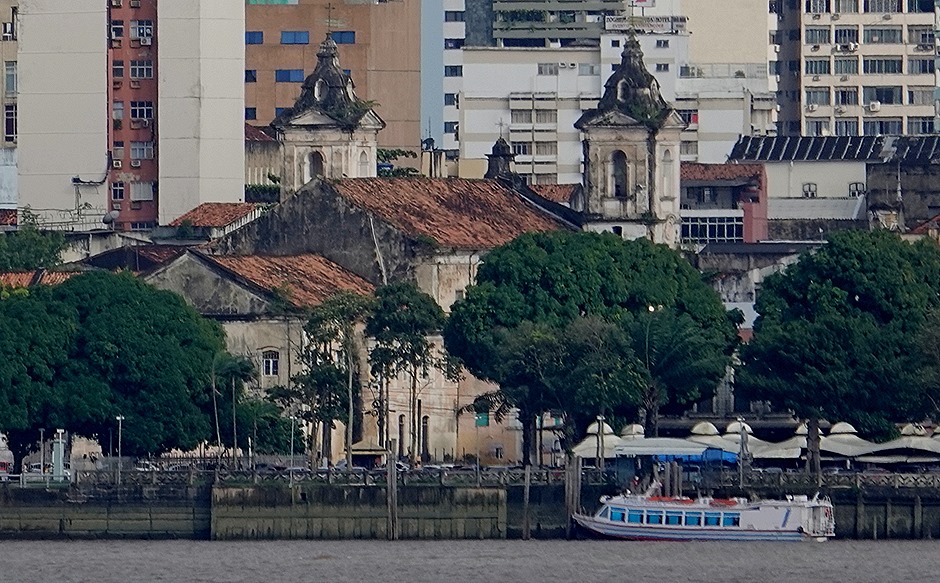 Our next objective was the Ver-o-peso market, the largest open air market in Latin America.  Its name, which means “see the weight,” comes from its original function, beginning in 1688, as the Portuguese station for collecting taxes, charged by weight, on all flora and fauna brought out of the Amazon.  The market is expansive, with some 2,000 vendor kiosks stretching along the waterfront and a bit inland.  It is centered by the Mercado de Ferro, an iron building prefabricated in the England and erected here at the end of the 19th century.  The stalls in the building are all devoted to selling fish, brought here each morning by Amazon fishermen.  But you have to be there early to see it; we were there in late morning and the building was completely closed. 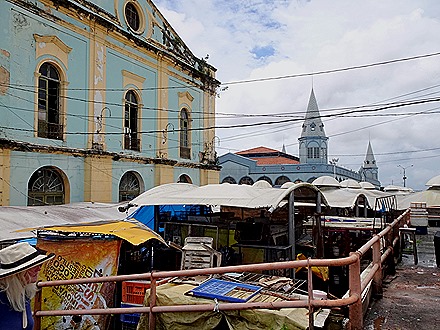 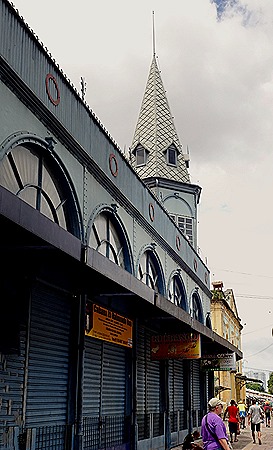 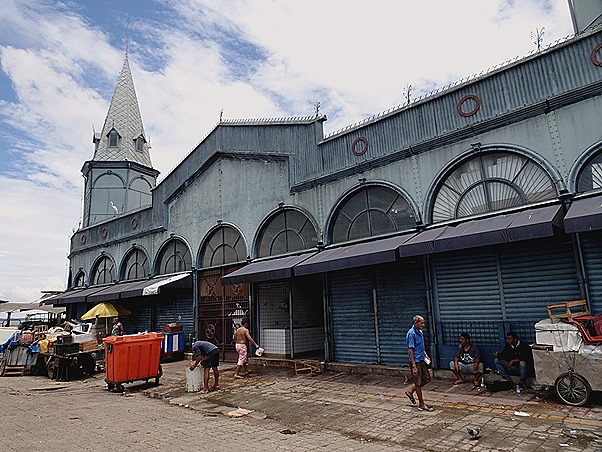 The stalls that were still open when we visited were full of colorful fruits and vegetables, many of which are unavailable anywhere outside the Amazon, as well as handicrafts and even birds and animals (for eating, we suppose). 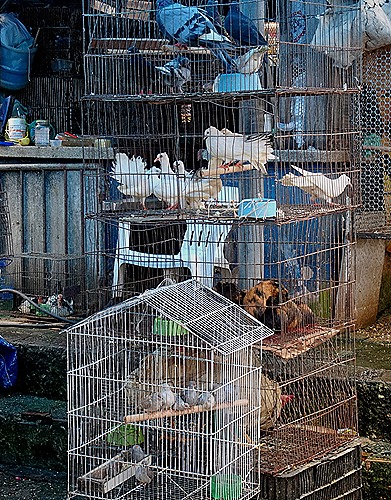 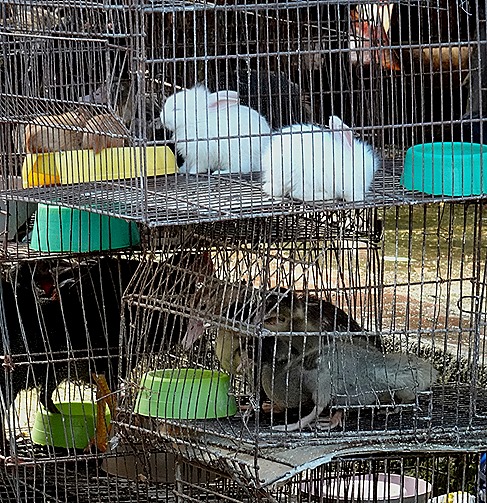 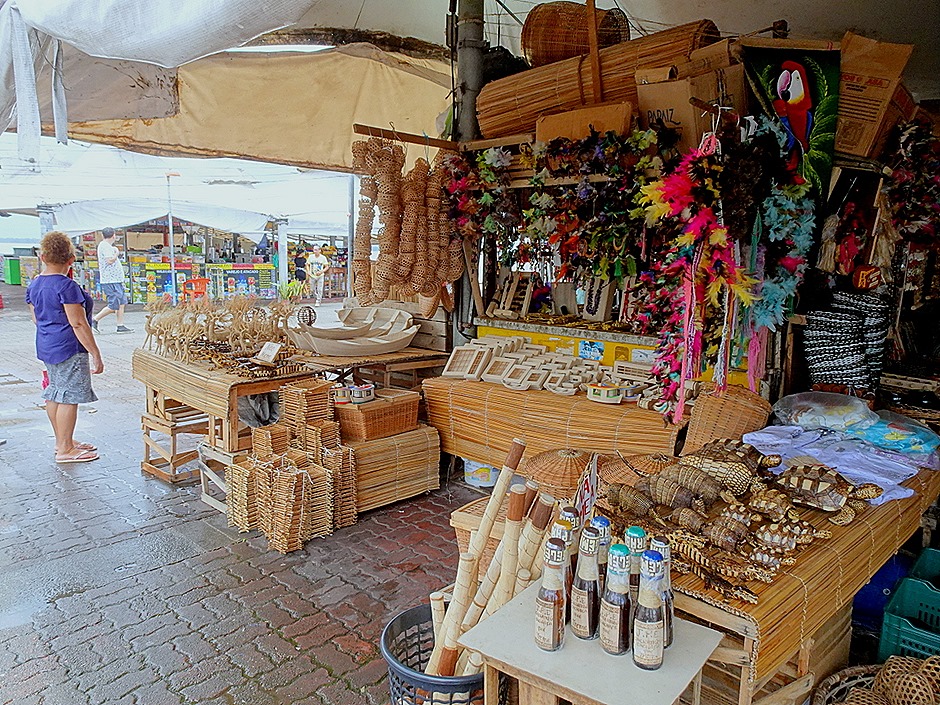 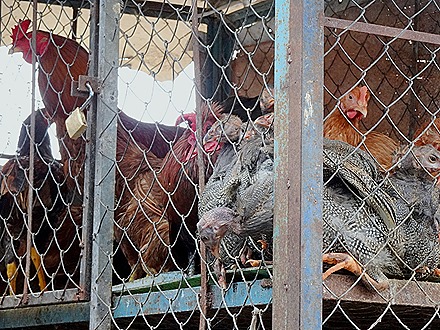 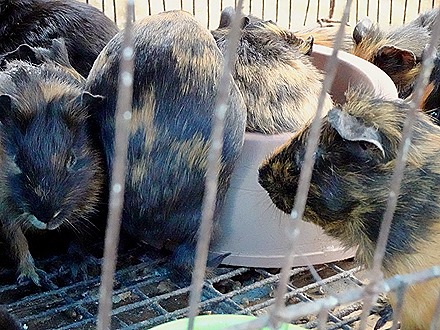 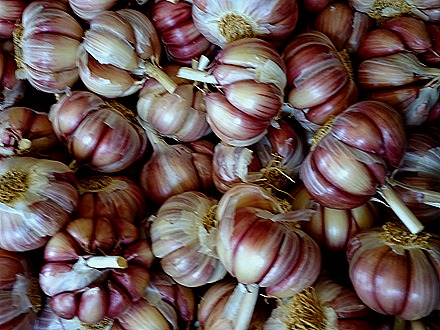 We mentioned before that the market opens early and we were there when it was beginning to close.  Some vendors clearly had already had a long day. 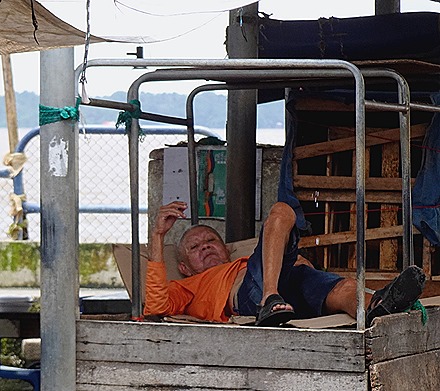 We walked over to the old port where the boats unload fish every morning.  A lot of boats were tied up there and a lot of Black Vultures were congregating on the pier, probably hanging around for any bits thrown away when fish are dressed.  Up close they look a little like English judges wearing their wigs. 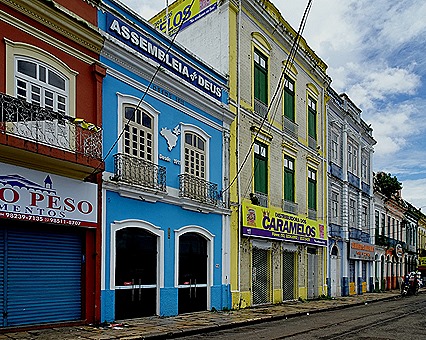 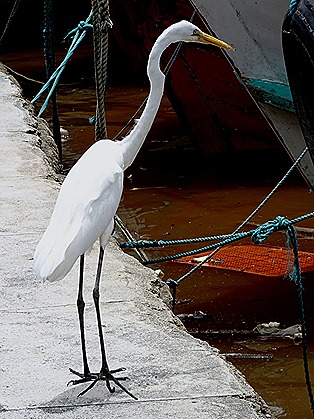 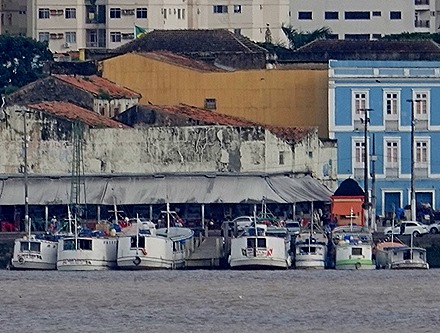 Next we walked over to see the Catedral Nossa Senhora das Gracas (Our Lady of Grace Cathedral).  On the way we passed the cast iron clock tower imported from England in 1930 and what looked like an amazingly ornate iron telephone pole.

A few years after the original fort was built the church was moved from there to the current location.  It became a cathedral, seat of the Dioceses of Para, in 1719.  The current building was completed in 1782 after almost 35 years of construction.  It is an imposing white structure, visible from the bay, with a nice park in front of it.  It is supposed to be quite nice on the inside but it was closed when we were there.  In the park were several vendors selling coconuts, a popular refreshment in Brazil. 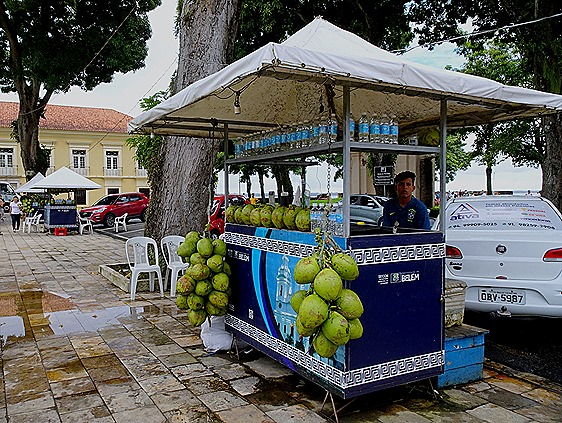 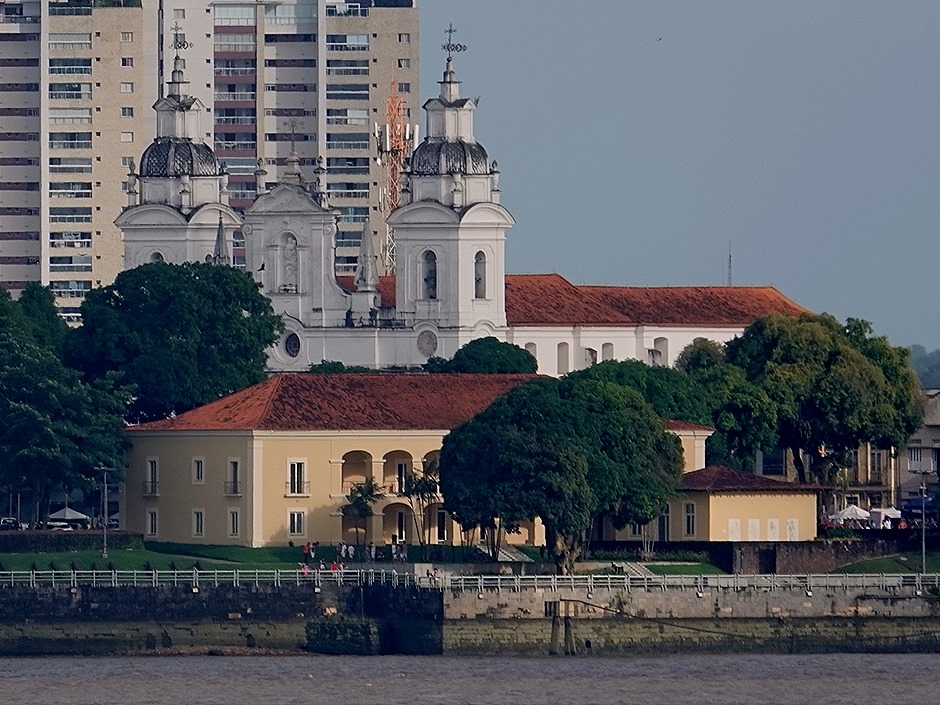 We walked back past the fort.  Popularly referred to as the Castle Fort or Forte do Presepio, the actual name of the fort is apparently Castle Fort of the Bethlehem Nativity Scene.  Belem being Portuguese for Bethlehem, this is where the city’s name comes from.  The original fort was built on this spot in 1616 but it has been revised, rebuilt and renovated many times over the centuries.  Today it houses a museum, but since everything inside is in Portuguese and there is an admission charge we decided not to go in.  The fort is surrounded by a moat and the stone walls where we walked by it were covered with strikingly green lichen or algae.

After passing the Estacao das Docas again we walked to the Theatro da Paz.  We passed some more of the old buildings painted in a variety of colors, many of which date to the 17th and 18th centuries.  We chose to walk up a wide thoroughfare to be on the safe side.  We were there during Carnaval and there seemed to be a lot of police everywhere, a contrast from the quiet Sunday of our first visit.  As we were consulting our map a police car stopped and, although he didn’t speak much English, cautioned us to stay on the major street (which we had no intention of leaving).  We walked past a long mosaic sidewalk on our way. 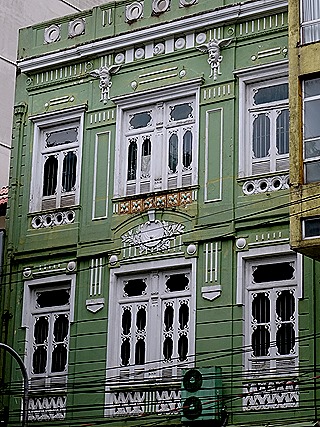 Financed by rubber riches, Theatro da Paz (Peace Theater) was completed in 1874 and opened for business in 1878.  After the rubber boom ended the theater deteriorated with disuse but was restored in the 1960s.

We had a guided tour of the theater.  The main entrance hall is quite grand, with large chandeliers, statuary, mosaic floors and a stairway with red carpet leading up to the theater itself. 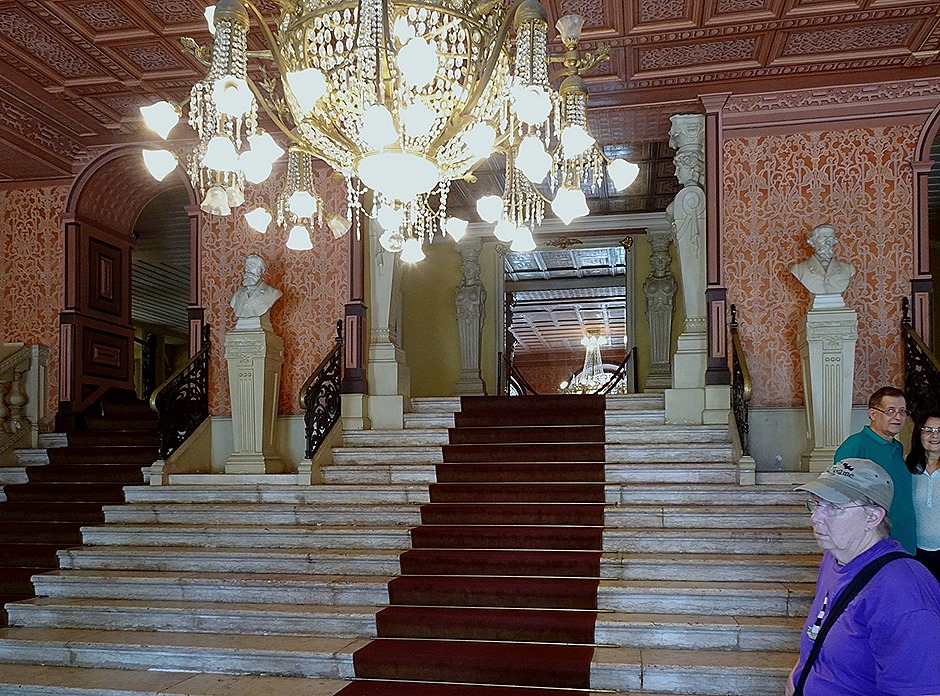 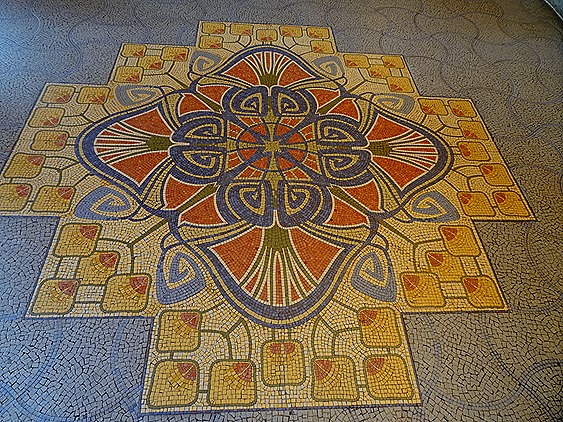 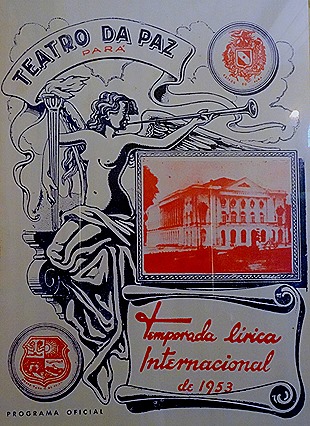 Seats in the main theater are in a horseshoe arrangement around the stage.  Large paintings cover the ceiling along with a chandelier. 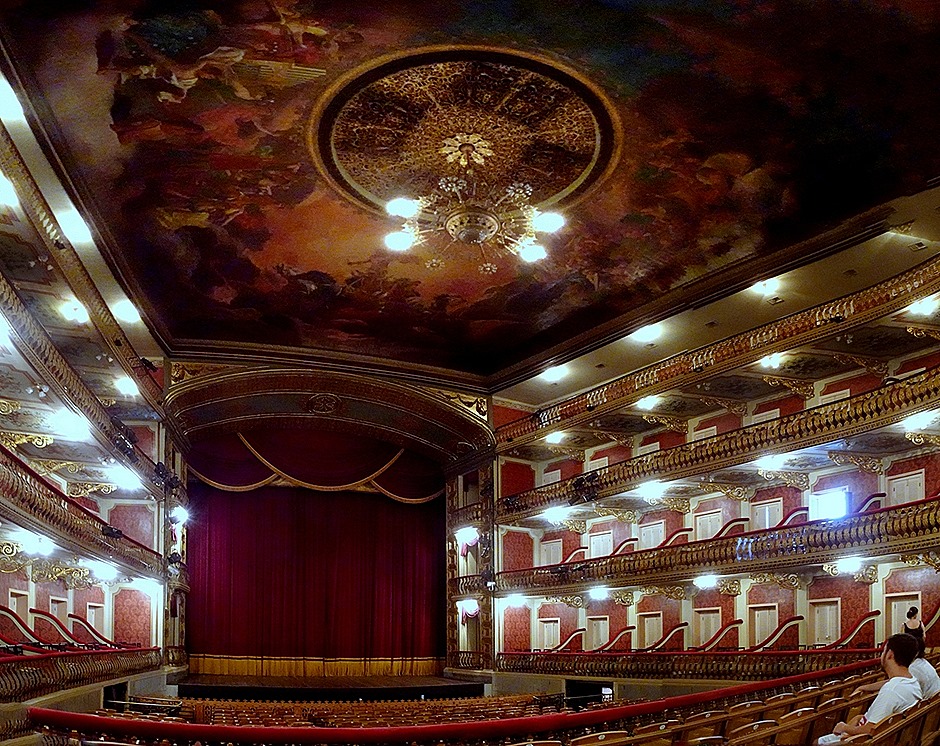 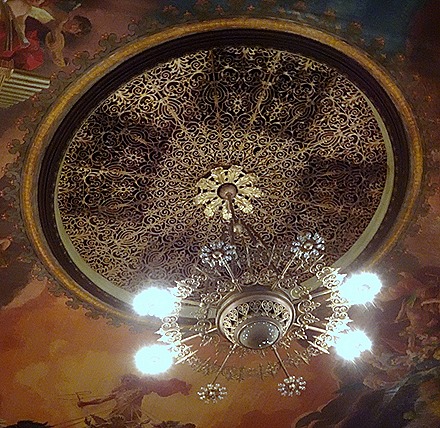 Upstairs is a great hall that looks like a ballroom.  The ceilings are covered with paintings, the walls are patterned in yellow, there is a balcony and the floors are inlaid wood. 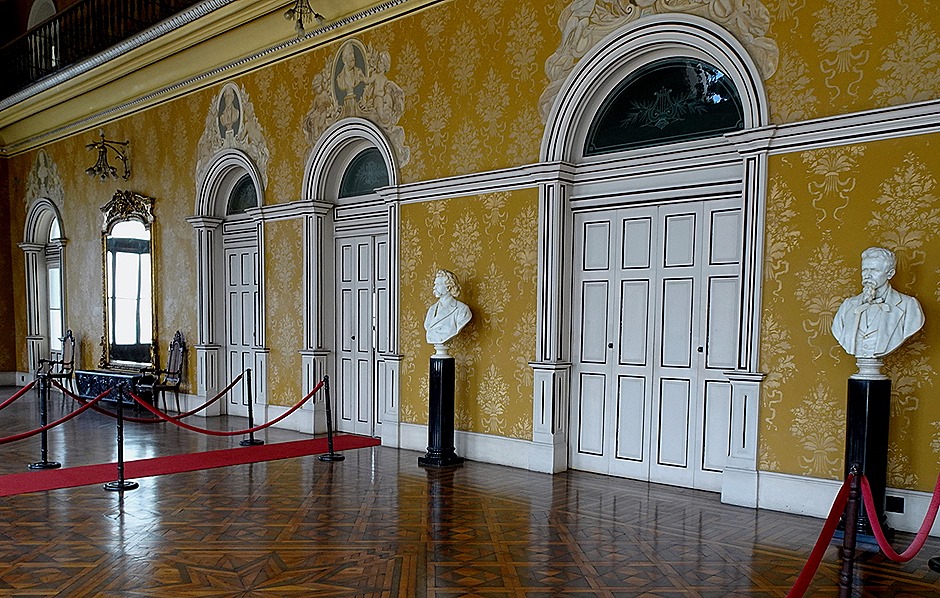 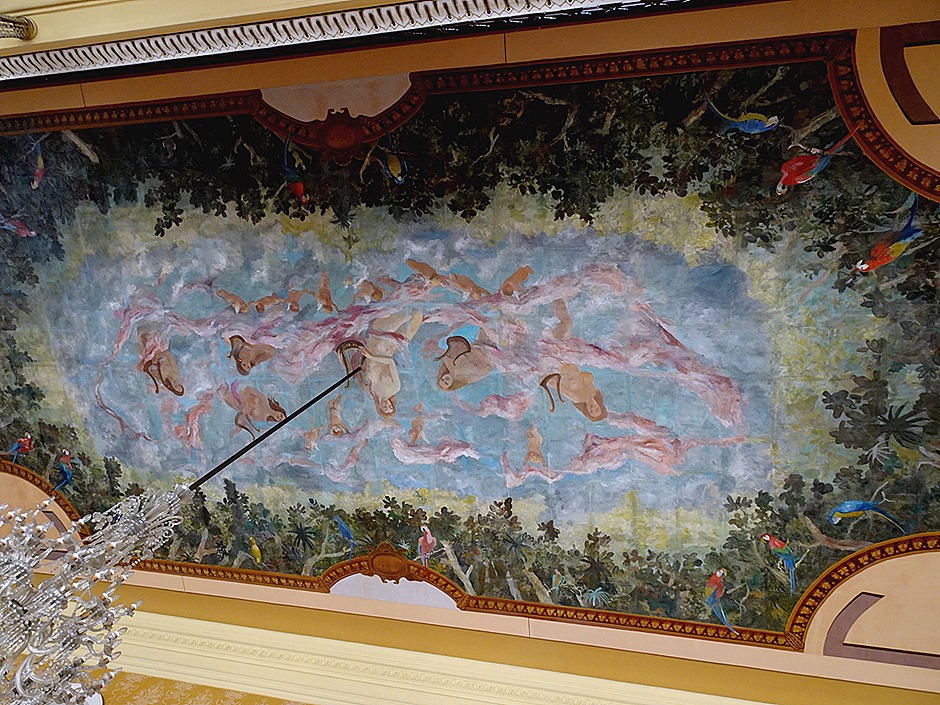 We went out onto the terrace attached to the grand hall, which is the same one overlooking the park that we saw before entering the building. Each corner of the balustrade had a large sculpture holding up a light.  Below was the mosaic plaza with initials that we had seen from the ground before. 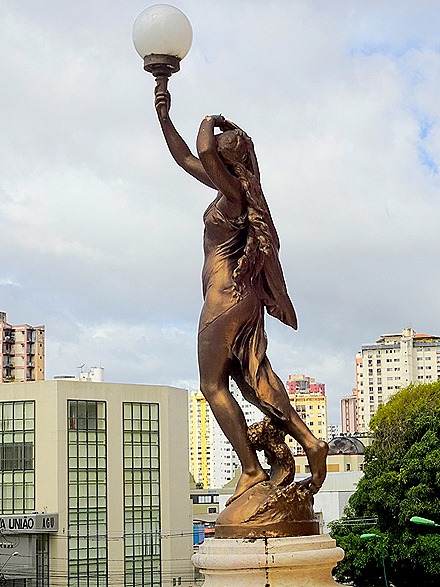 Back inside, we walked down some stairs and went out on another terrace or patio.  This one had a row of columns on one side and a row of doors on the other, which were decorated with panels of what looked like reddish orange marble (but was probably faux). 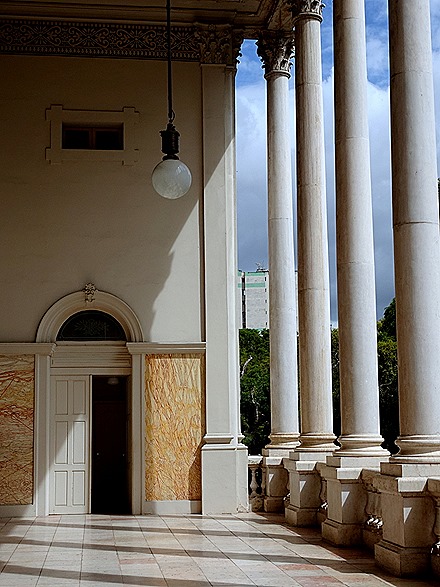 After leaving the theater we walked back through the park in the Praca da Republica.  In the center of the park is a tall monument to the republic, completed in 1897.  You can see the theater behind it.

We returned to the Estacao das Docas, where the tender dock was located.   This facility has close to 200,000 square feet of restaurants, stores, and even a brewery.  The structures were originally metal warehouses prefabricated in England and set up here near the end of the 19th century.  The yellow cranes lining the dock outside were imported from the United States.  The restored complex opened in 2000.  We sat down and had an Amazon Beer, apparently brewed on the premises. 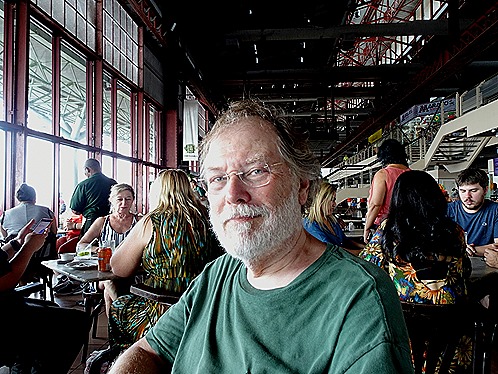 The beer was very refreshing as it was pretty hot out (Belem is near the equator).  It was Carnaval time and we had heard there was to be some sort of event at the Estacio focused on children.  We didn’t see it (this is a very big place) but we did see a number of people with Carnaval attire.  Nothing as elaborate as what we saw in Rio, but festive. 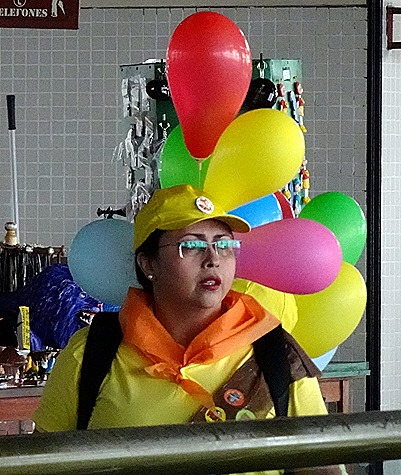 Refreshed we went outside on the pier and down to the tender dock, passing Wonder Woman (or maybe Captain America) as we went.  We tendered back to the ship and took some pictures of the city before we sailed away (some of which you have seen above). Belem was a very good stop, with much of interest to see and do.  Really, it is a nice place just to walk around the streets and enjoy the ambiance (although it can be unsafe to wander too far into some of the neighborhoods).  Leaving Belem behind we headed into the Amazon. 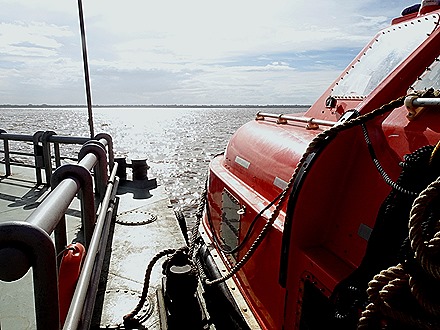