The morning of March 16 found Prinsendam anchored near Ile du Royale, the largest of the three Salvation Islands.  This is the one island that can be visited from a cruise ship; the other two are called Ile St-Joseph and Ile du Diable (which means Devil’s Island).

For just over 100 years this archipelago was part of a French penal colony.  It was opened in 1853 by Napoleon III after his coup, and eventually more than 200 republican opponents of his regime were stashed there.  After a lot of bad publicity the French stopped sending prisoners here in 1938 with the intent of closing the penal colony, which they did in 1953 after a delay caused by the German occupation of France during World War II.  Today it welcomes visitors from cruise ships, private yachts and people ferried here for a look on local boats from the mainland some 8 or 9 miles away.

We tendered in as early as we could after finishing breakfast.  The island is lush and beautiful, and studded with the ruins of interesting penal colony buildings.  The tiny port has a small but sturdy tender dock.

This is a beautiful tropical island, lush with palm trees and surrounded by surf.  Add in the extra interest of the ruins of the prison camp and some nice weather and you have the makings of a very nice port stop.  But there is little to do here other than explore the island on foot: no excursions, no busses, no beaches, no zip lines.  So that is what we did, just as we did on our first visit, although our routes differed a bit.

We walked down the path to the left in the picture above.  Upon entering the forest we encountered some Capuchin monkeys and then some steep stairs to get up to the level that was the center of the prison. 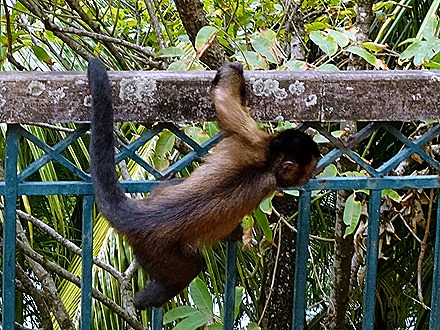 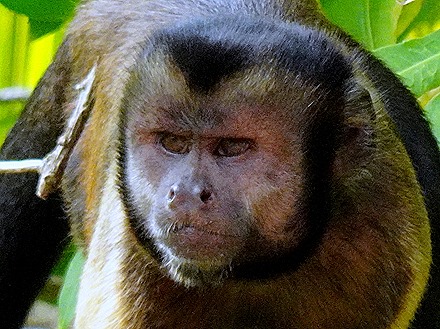 On the way up the hill we spent some time in a small museum, filled mostly with explanatory displays about the history of the prison colony and the prisoners who served time here.  At the top we came upon the prison chapel, in good shape (probably restored) and perhaps currently in use.  Inside were some interesting paintings on the walls by a prisoner named LaGrange who was a counterfeiter.  Across from the church was the hospital, looking well restored at least on the outside, and nearby were some real ruins not restored at all. 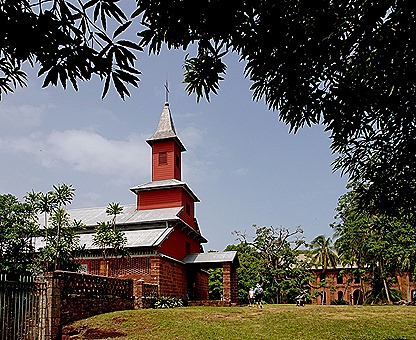 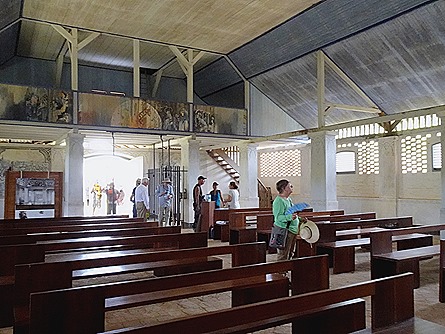 We visited the ruins of the main prison, where prisoners were chained to a long bar stretching the length of the room so they couldn’t even walk around their cells. 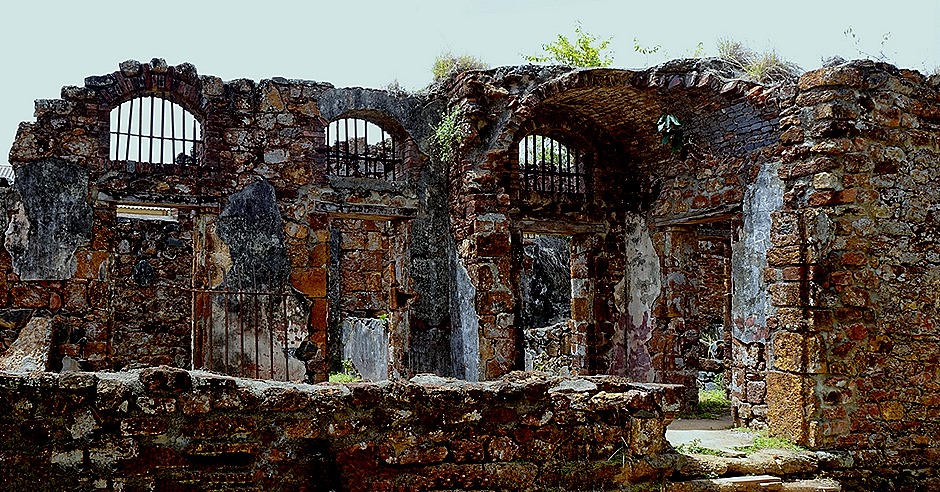 We visited buildings with cells for prisoners in solitary confinement.  Pretty depressing looking cells, tiny and dark.  These two buildings were still pretty much intact, in much better shape than the prison walls above. 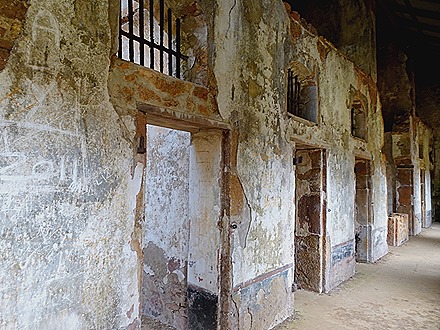 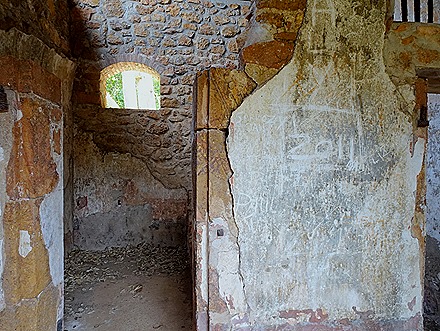 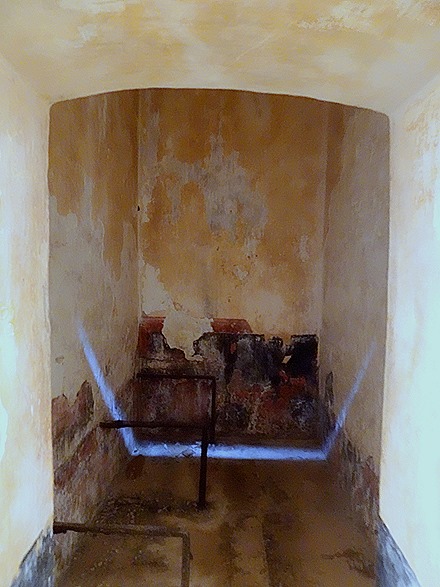 We visited the much nicer area where the guards and other prison personnel lived.  We think the personnel who manage the island and the space port tracking station may live there today.  The French Space Agency (CNES) operates its launching facility in Kourou, on the mainland near these islands, and there is a tracking station on Ile Royale.  In fact, the French Space Agency is in charge of managing the islands, which are evacuated before launches.  Near these guard houses we passed the French launch tracking station. 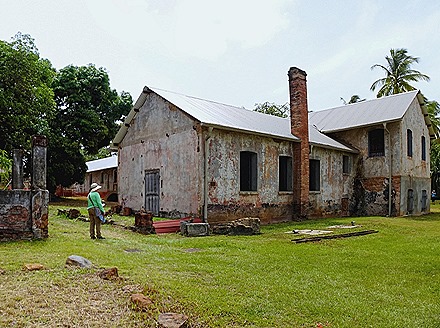 We walked over to the hotel, which we have read started life as the guards’ mess when the prison was active.  Yes, you can book a room and spend your vacation on this island, but why would you want to spend your vacation at an infamous old prison?  The hotel has a restaurant and it sits on a hill with a nice vista of the sea and Devil’s island across the water.  It also has a souvenir shop, but it was pretty expensive (no competition, we guess).  There is a peacock living on the grounds, although we didn’t see it during our visit. 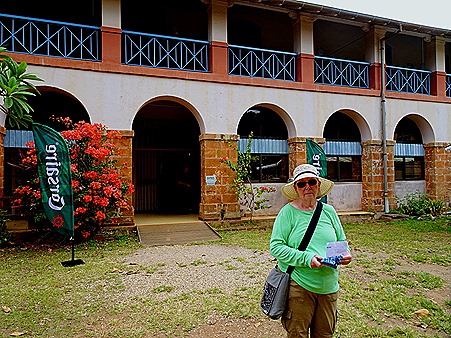 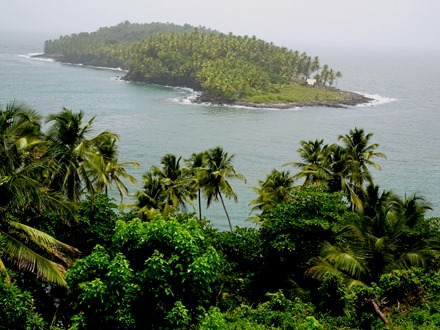 We descended some steep steps behind the hotel toward the coast nearest to Devil’s Island.  Devil’s Island is only about 600 feet away from Isle Royale, but the water is very rough and infested with sharks.  This is why it was almost impossible to escape. The book & movie Papillon were presented as the memoirs of Henri Charriere, a prisoner who escaped Devil’s Island on pontoons & had many adventures.  But it turns out he actually was imprisoned on the mainland and never set foot on the islands (it is nevertheless worth reading).  Very few of the 80,000 prisoners sent here over the century of operation ever made it back to France.  A majority died on the islands and French law required prisoners to stay in French Guiana after leaving the prison for a number of years equal to their prison terms; if the term was 8 years or more they had to stay for life. And even those who were no longer prohibited from returning to France could not do so unless they could pay their own way.  To keep the sharks around prisoners who died (as most of them did eventually) were rowed out from the shore and dumped in the water.  This happened often, so the sharks stayed around.  Because taking a boat to Devil’s Island was so treacherous there was a cable car built between the islands to transport supplies.

On our way to the coast we encountered another monkey and an agouti (a rodent related to the guinea pig). 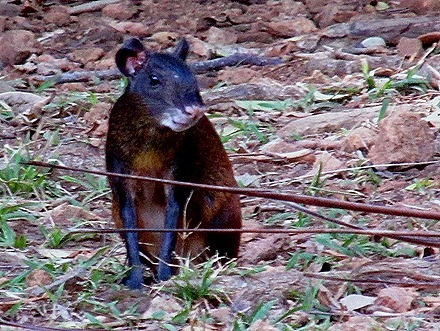 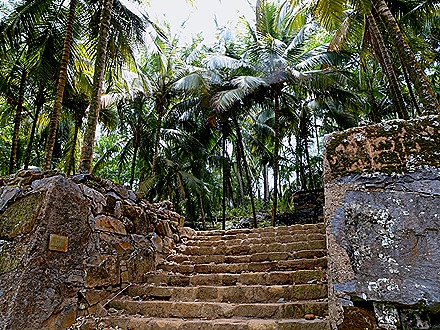 At this point Mary & Bill decided to return to the tender pier while Rick & Robert continued the walk around the edge of the island.  There were good views of Devil’s Island and a sign warning you to be careful as this is a dangerous area (no kidding!).

Probably the most famous person imprisoned on Devil’s Island was Captain Alfred Dreyfus, framed by the French Army because he was Jewish for an act of espionage committed by another soldier in order to preserve the public image of the army.  Sentenced to life imprisonment on Devil’s Island in 1894 after conviction for treason, he was freed and his army rank restored after about five years because of a campaign of public protest led by Emile Zola, among others, and the discovery of the suppressed evidence that he was innocent.  There is a restored stone hut near the water on Devil’s Island that we think was where he was kept, but if not, this was like the one where he lived under close supervision, with no hope of liberation because he was not told of the campaign in France to free him.  We do not recall seeing this hut when we were here in 2012, so it may have been restored since then. 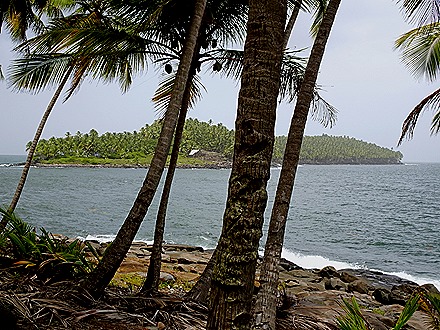 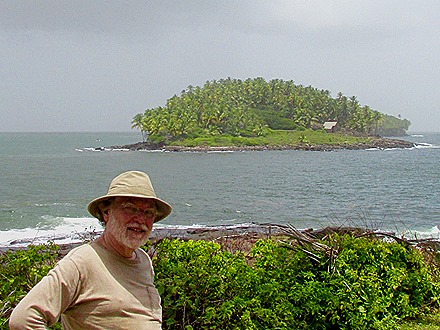 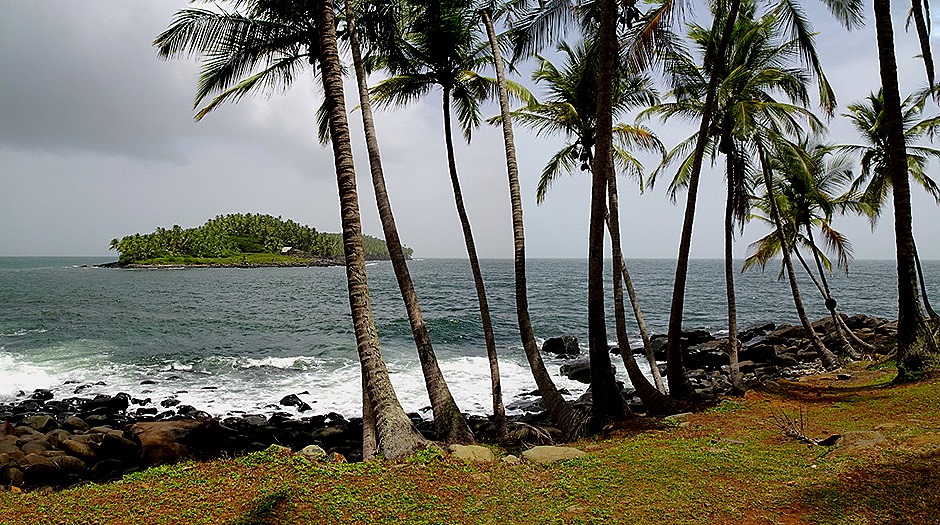 On the walk around the rest of the island to the tender dock Rick & Robert encountered a sea turtle in the water and an iguana sunning itself on a rock.  When we reached the tender pier Bill & Mary were nowhere to be found.  Rick thought we were to meet them here but Robert thought they were going straight back to the ship.  Fortunately, Robert had it right. 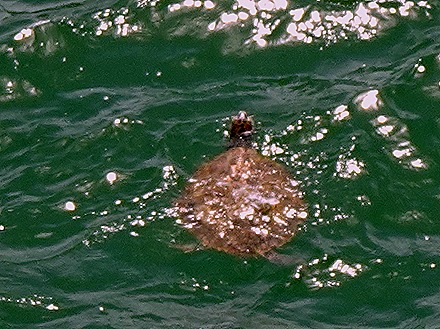 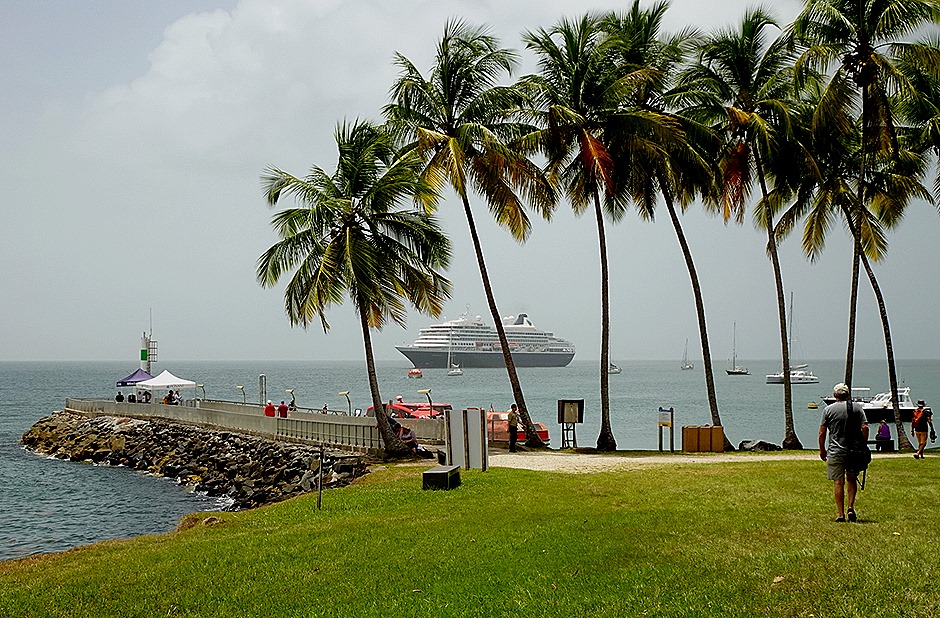 On the ship that evening the wait staff were dressed in striped prisoner attire and one of the penguins was standing guard over some prisoners outside the dining room.  We had some fruit carvings in the Lido during the afternoon.  The next day was a sea day and we were invited (along with a number of other passengers) to dinner in the Pinnacle restaurant with the Captain.  Everyone who took the full voyage was invited to one of these soirees but as the trip was coming to an end we had not received an invitation.  Feeling a little slighted, we asked our travel agent hosts, Henk & Lucia, if they knew why.  Before long we received an invitation for March 17.  It turned out we were on the list for an earlier Captain’s dinner but the invitation was never delivered to our cabin.  This was a good example of why it is good to have a travel agent host aboard, especially one as effective as Henk & Lucia are.  Prior to the Pinnacle dinner there was a cocktail reception in the Captain’s quarters.  For reasons we won’t go into here, the Prinsendam Captain’s quarters are reputed to be the largest and most lavish in the fleet, and we won’t argue with that since the reception was held in a large room next to his living space equipped with a bar.  After this we headed into the Caribbean to visit four islands on the final leg of our journey. 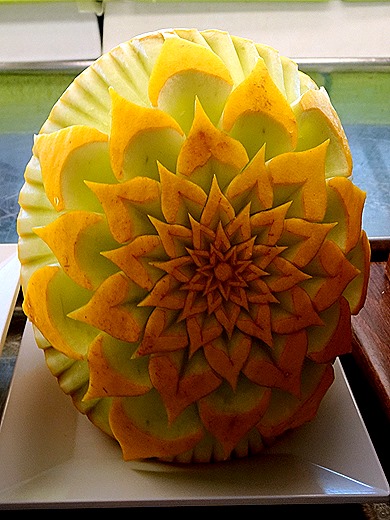 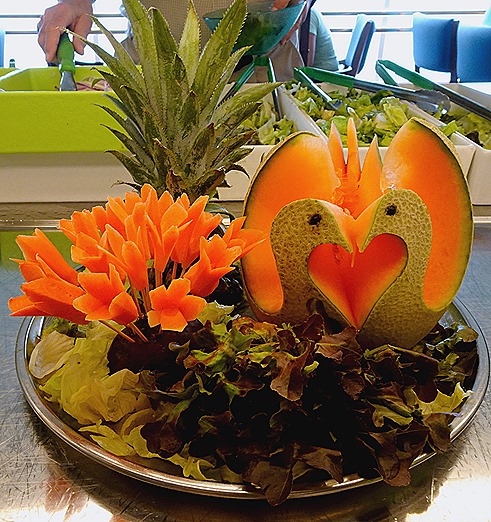