We arrived in Recife on Monday, February 20, a day earlier than originally planned.  This was because the Prinsendam folks decided to skip our scheduled stop in Salvador de Bahia, which I had anticipated to be one of the highlights because it is a special city in a number of ways, particularly in music.  However, there was (as I understand it) a police strike, which had resulted in 50 or more murders & the city was occupied by troops (although I’m not sure any of that was still true by February 19, when we were supposed to arrive).  So, with a lot of older people aboard they decided to skip Salvador, with the result that we spent two days, Monday and Tuesday, in Recife.  The positive side of this was that Monday & Tuesday were the last two days of Carnaval (this is the Portuguese spelling, which is used down here), & Recife is reputed to have one of the best Carnavals outside of Rio.  Rio’s Carnaval is, they say, a spectator event, highlighted by a parade put on by the Samba schools in which everyone else stands by & watches (I saw a little bit on a TV near Recife), while Recife’s Carnaval is more participatory, with large crowds joining in.  This is consistent with our experience.

On Monday we walked through Recife & took pictures of the important buildings, the Carnaval decorations & the people out & about.  That night we took a canal tour (Recife is called the “Venice of South America” because it is built on 3 islands and has a number of bridges over a few rivers & canals, but I have been to Venice & Recife is no Venice; its only advantage over Venice in my opinion is its dearth of mosquitoes, which are more than plentiful in Venice).  We took many pictures during the canal tour of the bridges and Carnaval decorations lighted after dark.  On Tuesday we went on a trip to Olinda, a beautiful picturesque town with its own unique Carnaval atmosphere, & took a number of interesting pictures there as well.

However, you will not see any of those pictures here because on our way back from the tour of Olinda (& an island called Itamaraca) my camera was stolen.  We were in a tour bus that was slowed to a crawl in a small town near Itamaraca because the locals were having a Carnaval parade, consisting of a band on a truck & a large crowd of locals, many of whom were dressed up for the occasion.  We were on the wrong side of the bus to see the crowd but another passenger offered me her seat to take a picture.  As I slid the camera slightly out the window to take a picture, three young men apparently ran over, leaped in the air, & grabbed my camera (I say apparently because I never saw them).  Before I even knew what was happening the camera was gone & all that was left was the strap around my wrist (the strap didn’t break; the metal bar on the camera to which it was attached broke off).  They were gone & there was nothing to be done.  It was an empty feeling, to say the least.

Fortunately, I had already downloaded all the pictures prior to Recife, but I lost all the pictures I had taken there & in Olinda.  And we do have our old camera with us so we will be able to continue providing pictures of our trip (although they won’t be as good, since the old camera’s capabilities are far less).  So, you will see pictures of Recife & Olinda here, but most of them were not taken by us (we did go out that evening to the Recife Carnaval, which was centered about a 10 minute walk from our ship, so some of these pictures are ours).  A couple of the people on the Olinda tour with us graciously offered to share their pictures with us, so we have quite a few pictures, many of which are of the same things we had photographed (although not with us in them, and our pictures of the Olinda library couldn’t be replaced).  So, with the understanding that unless otherwise indicated these pictures were not taken by us, we can proceed to a tour of Recife & Olinda.

As I said before, Recife is built on 3 islands and our ship was docked a short walk from the old part of the city, which dates back to the 16th century.  Recife is a city of several million people, and its high-rise buildings stretch out seemingly forever, as in so many of these cities on the east coast of South America.

On Monday, February 20, we spent the late morning & early afternoon walking around the old part of the city, across the bridges & around the government square.  Everything was closed for Carnaval so we didn’t get to go into any buildings; in fact most buildings were boarded up & had temporary plywood fences (sometimes brightly painted) erected around them, presumably to protect them from revelers.  But everything in the city was also dressed up for Carnaval, including buildings, streets & bridges.  Early in the day, when we were out, there were not very many people around (I guess they were still sleeping off the night before) & the lights were off, but it was interesting to see. 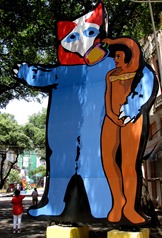 You can see these huge images all over town.  They are flat & painted, and about 8 inches thick between the painted panels.  There was an amazing variety of them everywhere.  We walked by the main Carnaval stage on the water’s edge in Recife old town, & a secondary stage that was set up in a square a few blocks away.  There is a huge open square in front of the main stage that fills with people at night (you will see later what these stages looked like at night). 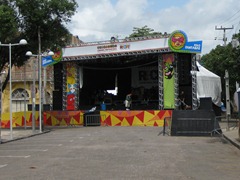 One of the more interesting buildings in the old town is the first synagogue built in the Western Hemisphere.  It was established during the period the Dutch held Recife (1580 – 1640).  The Dutch were very tolerant of Jews at that time but when the Portuguese took back Recife they were no longer welcome.  The Recife Jews left, settling in other Dutch territories such as the island of St. Maarten (which we will visit later in this trip) & New Amsterdam, where they founded the first Jewish community in what is now New York.  The building is no longer a synagogue (although Recife does currently have a relatively small Jewish community).  I think its now some kind of cultural center, but it does still have the synagogue name on it and the street sign still indicates  that it was called Rua Dos Judeus from 1630 to 1654 (these are my pictures, taken at night during Carnaval on Feb. 21). 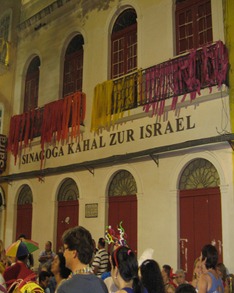 We walked across one of the bridges into the middle island where the center of government is located. We saw the Palacio do Campo das Princesas (Governor’s Palace), the Palacio de Justica & the Praca de Republica, a lovely park between these buildings, which was locked & boarded up for Carnaval; notice the egret walking by the pond. 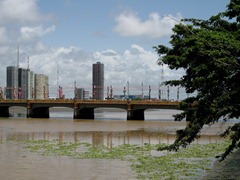 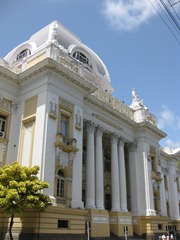 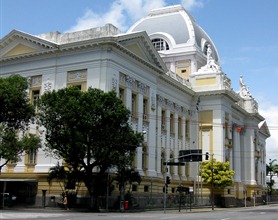 We crossed another bridge, the highlight of which was a giant rooster, the symbol of Recife’s Carnaval, and there were some interesting old Dutch houses along the river in this area.  On the way back we saw a building with unusual images painted on its shutters. 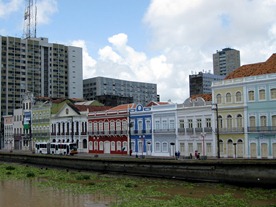 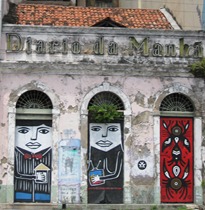 After sunset on Monday evening we went on a boat tour of the canals & bridges.  By this time Carnaval had begun for the night & there were quite a few revelers out & about, many in costumes of a bewildering variety (although this was quite early yet, & the crowds become much bigger & more boisterous by 2:00 or 3:00 AM).  The nighttime perspective is quite different from daytime, so here are nighttime views of some of the same sights set out above.

The bridges were lit up, including the rooster.

There were a number of buildings on which were projected animations.  The best one we saw was a frog, which eventually stuck out its tongue to grab a morsel shaped like one of the windows on the building. 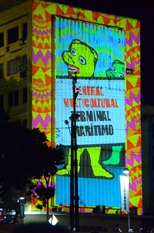 This was very early in the evening, around 7:00 PM, but there were already quite a few revelers about on the bridges & along the riverside. 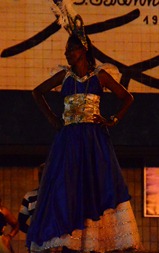 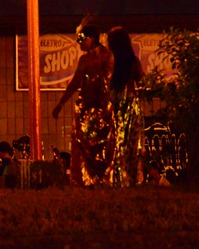 So, having had a full day of festivities & sightseeing in Recife, we returned to the ship to rest up for Tuesday’s trip to Olinda (while 10 minutes from the ship, Carnaval continued well into the night).

This entry was posted on February 27, 2012 by Rick. It was filed under South America Circumnavigation .