Friday, February 17 we spent in Vitoria, another sizeable South American city we had never heard of before.  There are 2 or 3 million people in Vitoria & the 3 other cities that are virtually contiguous to it (estimates vary).  Founded in the 16th century, Vitoria is the capital of the Brazilian state of Espirito Santo.  The ship had to go up a river and under a bridge, so I think few cruise ships visit here.  Oh, yes: we are now nearing the Equator, where days and nights are of equal length all year long & it is very HOT!  Its hard to believe we were freezing in Antarctica less than two weeks ago.

Vitoria is a mixture of modern & historic, mostly modern.  The upper city is above the port area,and you reach it by climbing, mostly stairs.

We toured the Palacio de Anchieta, which started out as a church in the 16th century but has been substantially rebuilt into what is today the Governor’s Mansion.  Padre Anchieta, who is buried inside, was one of the founders of Sao Paulo, which originally grew around a chapel he built there.  However, he was driven out of Sao Paulo because he was a staunch defender of Indian rights, and ended up in Vitoria where he died in 1597.  In fact, the whole Jesuit order was notable for its defense of Indian rights and opposition to slavery, for which it was driven from the Portuguese empire.  Inside the Palacio we saw, among other things, an original 16th century wall & an interesting painting showing the Iberians’ idealistic notion of colonization: an Indian bowing deferentially before a priest who is converting him to Christianity.  Of course, the reality was that the typical Indian of that period was either dead or enslaved. 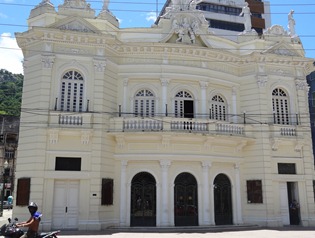 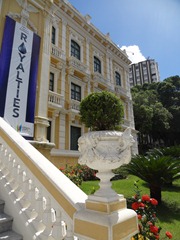 We visited a church called Igreja Sao Goncalo, built in 1766, that is dedicated to “Our Lady Of The Good Death.”  I don’t know the story behind that one, but it must be an interesting one.  Of note, the color of the church was actually more purple than blue, but this is what my camera saw.  And then we walked by the Catedral Metropolitano, which was a good bit more imposing.

Finally, we saw the Teatro Carlos Gomes, an old Italianate theater, and the Praca (Park) Costa Pereira in front of it, which had some interesting trees in it. 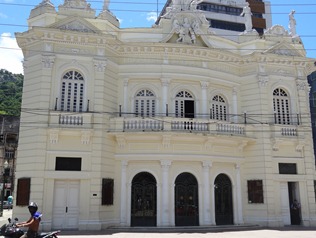 Vitoria also had some mosaic sidewalks, similar to Rio but with different designs.  Note that in the first picture the sidewalk actually is completely flat, contrary to appearances. 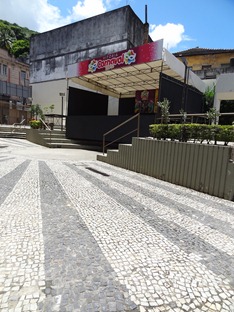 In the afternoon we had a performance on board by a local Samba school.  This was really a school, not just a club, for kids age 8 through 16.  It was similar to the Samba show we saw in Rio; all percussion music,  played by boys,  and all the dancing by girls.  They told us that the purpose of this school was to keep the kids off the street & teach them the traditional dance & music & have fun.  And they were very good.  But I must admit it was a little disconcerting to see young girls like this participating in this sexually suggestive kind of dancing.  The adults went out of their way to assure us this was all in fun, presumably because they were aware of how Americans were likely to react.  Anyway, here are some pictures of this colorful performance. 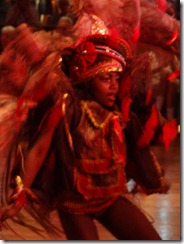 Our next stop after Vitoria was Recife, where we spent 2 days during Carnaval.  We were supposed to stop in Salvador de Bahia, but they decided to skip that port because of “civil unrest” resulting from a police strike.  This was a big disappointment for me, because Salvador is a very unusual city, populated mostly be the descendants of slaves and a center for the development of Brazilian music.  The Washington Post travel section ran a full page article about it 6 or 7 months ago.  But it was most interesting to have two days in Recife (and its neighbor Olinda) during their spectacular carnaval.  However, owing to some extenuating circumstances I will tell you about later, it will be a few days before I can post a Recife entry.  Meanwhile, I will leave you with the beautiful sunset as we sailed away from Vitoria.

This entry was posted on February 22, 2012 by Rick. It was filed under South America Circumnavigation .