We arrived in Fortaleza (Fortress) on Friday, February 24.  It is another big city (about 3 million) with skyscrapers lining its beachfront like Miami Beach.

I could think of only two reasons for stopping here: (1) its on the way, and (2) its our last docking port until we leave the Amazon, so we needed to fill up on water.  A shuttle bus took us to the older part of town, but really it wasn’t much fun to walk around.  Narrow, crowded sidewalks, lots of traffic, people set up all over the sidewalk selling stuff (and not interesting stuff) – altogether it was not a very pleasant city.

We saw two buildings of note.  First was the Metropolitan Cathedral, a 20th century building that is the 3rd largest cathedral in Brazil.  It is in a European style, with flying buttresses no less, and we were told it was inspired by the cathedral of Cologne (I have seen the cathedral of Cologne, & it is much more elaborate & beautiful than this one). 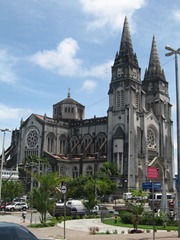 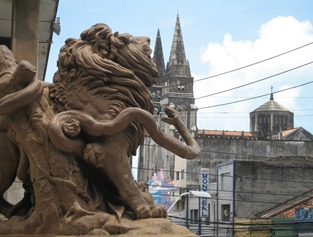 The other building was the Teatro Jose de Alencar (named after a 19th century Fortalezan writer).  Approaching it on the street you see an ornate but fairly conventional Italianate (we were told) building. 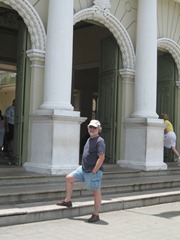 But when you walk through to the inner courtyard you come upon the actual theater, which is made largely of iron in an Art Nouveau style.

It was a whimsical combination, which we enjoyed.

On our way back to the shuttle bus we walked through the Praca Jose de Alencar, where so-called comedians pass the hat and if you don’t put something in it you become the butt of some nasty jokes.  Since we don’t speak Portuguese we decided to skip this entertainment, and we walked on through the Praca dos Martires (park of the martyrs) where there was statuary, fountains and a cooling canopy of trees (have I mentioned that in this part of the world it is HOT?). 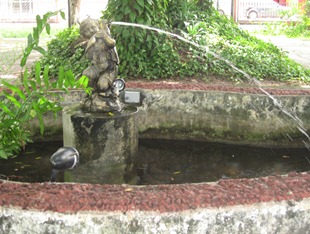 UPDATE on Vitoria:  You may recall (you can look back if you don’t) that we showed you a church in Vitoria dedicated to Our Lady Of The Good Death & speculated that there might be an interesting story behind that title.  Since then, our friend Rita Reimer found the story & sent it to us to share with you:

The Sisterhood of Our Lady of the Good Death (Irmandade da Nossa Senhora da Boa Morte) is a small but renowned Afro-Catholic religious group in the state of Bahia, Brazil.  Founded in the early 19th century as a Church-sponsored beneficent Sisterhood for female African slaves and former slaves, it became one of the oldest and most respected worship groups for Candomblé, the major African-based religion in Brazil. Presently reduced to about thirty members (from 200 or so at its height), most of them over fifty, it still attracts worshipers every year, especially at its August festival.

This entry was posted on February 29, 2012 by Rick. It was filed under South America Circumnavigation .