After a fairly rough crossing we reached Greenland on Saturday,  July 19.  While at sea on the way we spotted some whales not too far from the ship. They were hard to photograph because they surfaced only briefly.  I’m not sure what kind of whale they were, but from the dorsal fin I would guess Orca. Not a very good picture, since I had to zoom out to telephoto & then enlarge it, but its the only picture of whales I have so far (hope springs eternal) so I am posting it anyway.. Other whales were spotted at other times by the officers on the bridge but we didn’t see them.

Greenland is the largest island in the world (I mentioned before that Australia doesn’t count as an island because it is a continent).  It was first settled by Europeans in the late 10th Century Eric the Red. The name derived from the color of his beard, not his politics or his baseball loyalties. A thousand years later a baseball player named Eric Davis, who was one of the best players of his era until he got hurt, was sometimes called Eric the Red because he played for the Cincinnati Reds.  But I digress.

Eric was born in Norway, but his family moved to Iceland so his father could evade family vengeance for his murdering a man.  True to the family tradition, Eric was eventually exiled from Iceland for several years for killing several men (he was said to have a bad temper). He sailed west with a group of people & settled at the south end of the island. He decided to call it Greenland, according to the Icelandic Sagas, because he thought it would entice others to move there. Thus, Greenland was the subject of perhaps the world’s first real estate scam.

The Norse lasted in Greenland for a few hundred years, but it was never easy to farm (mostly ice rather than green). We were told that Greenland has no trees, & we certainly didn’t see any there.  Apparently it is not known what became of the last Norse Greenlanders, but they had disappeared completely by about the 15th Century. Today Greenland is an internally autonomous territory of Denmark.

Nanortalik (na NOR ta lick) was founded by Europeans at the end of the 18th Century but today it is pretty much all Inuit people. It has a long history of whaling but today its few hundred citizens seem to concentrate on fishing and a little bit of tourism (we were told that about 6 cruise ships visit here each year).  When several hundred passengers come ashore from a cruise ship the population increases many times over. It is a very colorful town of brightly painted buildings in a bleak but beautiful setting.

We came ashore from the ship in tender boats through a harbor full of icebergs. Very cool (not to mention cold). And remember, this is the middle of summer! Imagine what their winters must be like. I don’t think I would like living here. 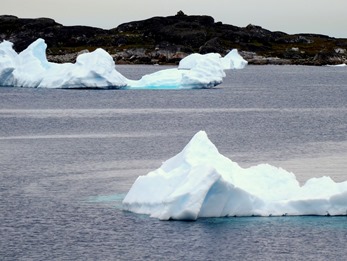 We were given a brief & superficial orientation by a couple of crew members then walked around the town a bit. It was still pretty early in the morning. The terrain is very rocky with large expanses of yellow flowers that looked like mats. 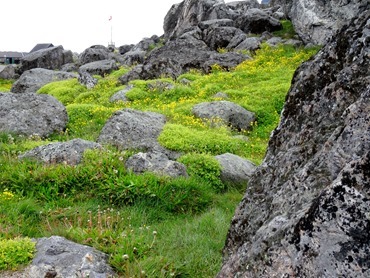 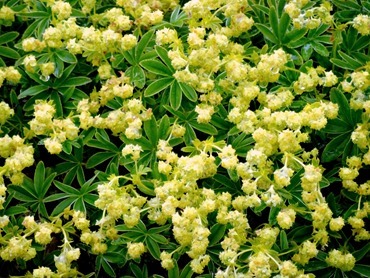 We walked past the docks, which had piles of ship containers.  All of the food & supplies come here by ship & prices are, therefore, pretty high. We discovered that Greenland also has its own flag. 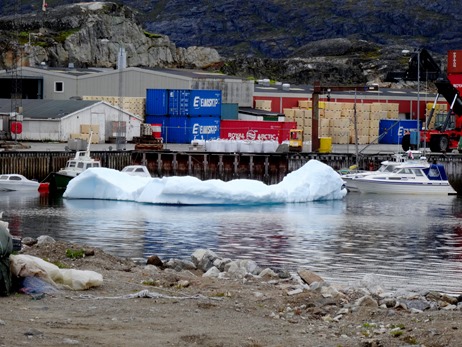 Nanortalik means “place where polar bears go,” & we are told that polar bears do float in around here on ice floes in the Spring, but we didn’t see any this time of year. The city coat of arms, appropriately, consists of 3 polar bears. The Kommune (like a city hall) had an unusual sculpture in front that I think represents a whale’s head. 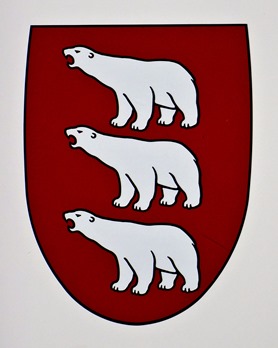 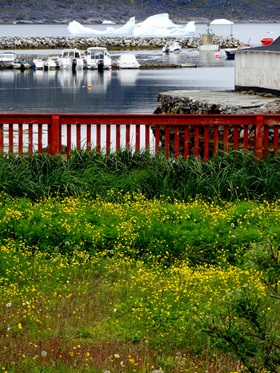 When cruise ships come to town the locals (Nanotorlikans?) put on a show. We attended this folk dancing & choir singing performance at the town cultural center. The dancing style was taught to the Eskimos here by Dutch & Scottish whalers and they have developed it into their own style.  It involves a lot of stomping and dancing in circles and was perfromed by teenage kids to the accompaniment of an electric organ played by an older man. One of the girls was dressed in the full traditional Inuit dress; we saw some just like it in the museum later. 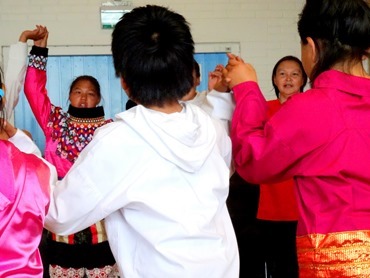 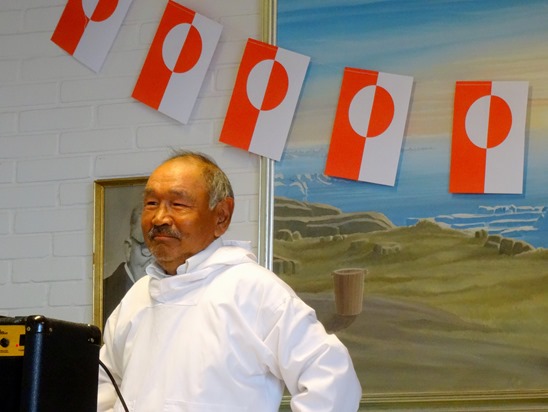 Next was supposed to be a choir singing religious & secular songs in Inuit language & style of 4 part harmony.  But they told us most of the choir were on holiday so there were only 5 people there to do the singing. They sang, in beautiful a capella 4 part harmony, several songs I didn’t recognize and finished with Amazing Grace in Inuit language. The older lady who sang soprano had a particularly powerful voice. 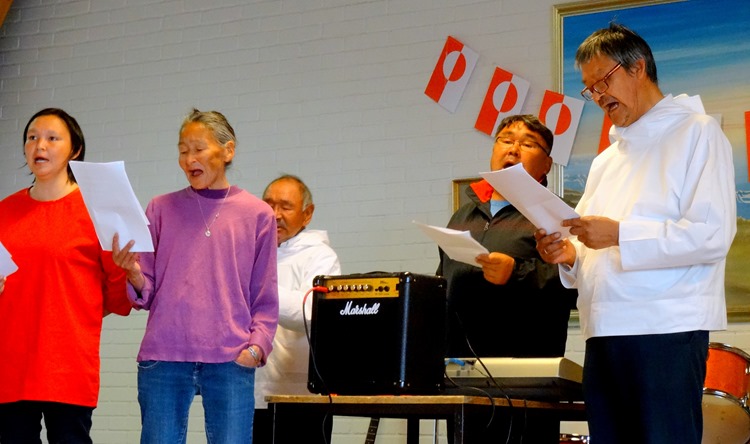 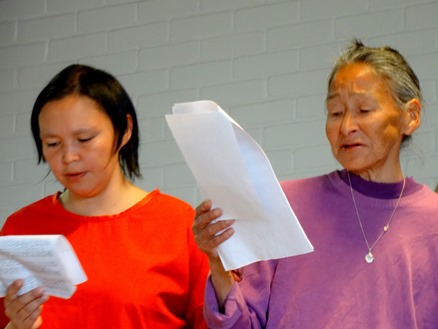 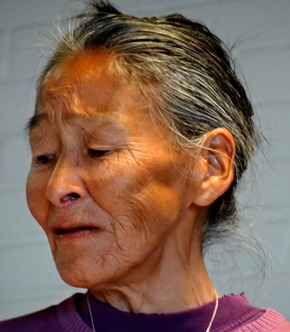 This was also billed as a “Kaffe-mik” (coffee party), in which Greenlanders invite another family into their home for cakes & coffee on special occasions.  The “famous Greenlandic cake” turned out to be more like raisin bread than anything else. It wasn’t bad but it didn’t seem special either. 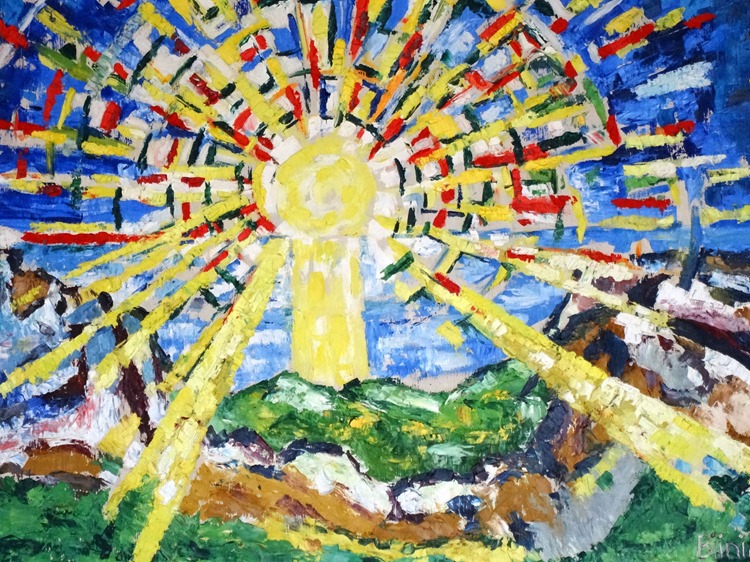 Nanortalik has an “open air museum,” which consists of a building with some displays and several buildings dating from the 1830’s & 40’s, some of which also contain exhibits.  There are supposed to be artifacts from the original Icelandic Viking settlers of Greenland, but the labels in the museum were all in Inuit which, I am sure you will be surprised to learn, we cannot read. In the museum we saw, among other interesting looking items, some small carvings, about 6” that look like whale bone or ivory, and some expressionist looking masks. 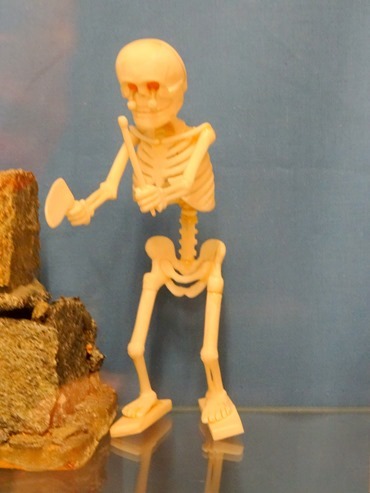 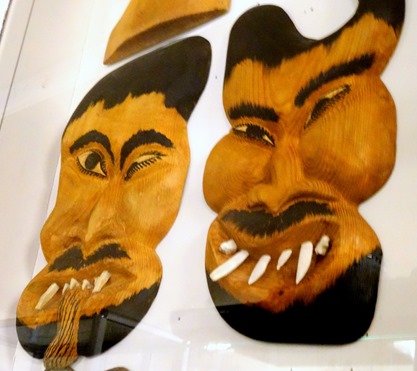 I mentioned that Inuit seems to be the local language, with little English spoken.  Below are some examples from street signs. So you can see why it would be difficult to find your way around without a map. Fortunately we had one. 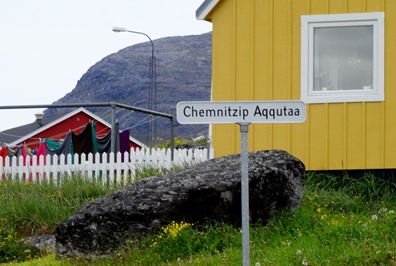 We walked around the “open air museum,” looking at the old buildings (all pretty similar with walls of granite stones) & climbed the steep steps to a watch tower located there.  This provided an expansive view of the town around it. 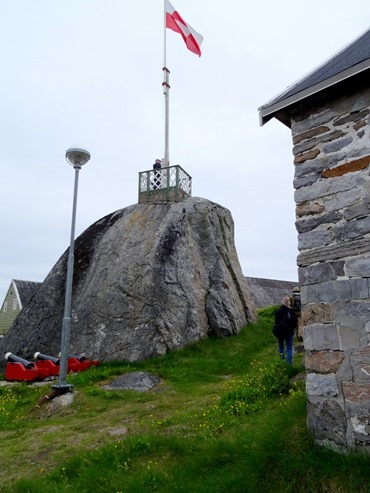 In an old cooper’s house were exhibits about kayaks & umiaks, boats covered in seal skin that were used for whaling by the Eskimos (today, Inuit).  They don’t hunt whales any more & kayaks haven’t been used for hunting since the 1980’s. Today they use regular boats.  But the exhibit included a couple of umiaks & old kayaks. 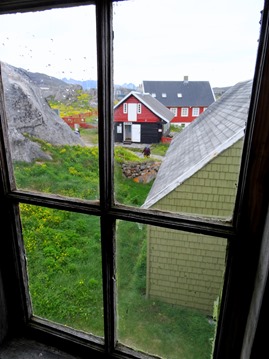 Prominent in town is the church, built in a distinctive style. It is over 100 years old. It was locked when we were there but I took a picture through the window. 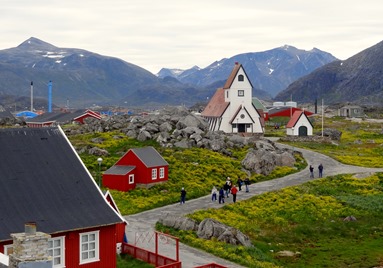 There was a lot of fauna in the area, even though it looked like it would be inhospitable to plants. Most of the flowers were pretty small but colorful (like the houses). 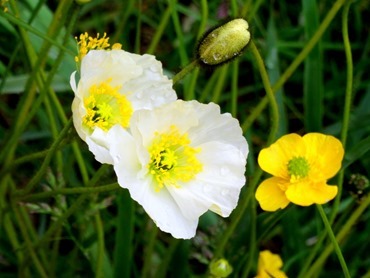 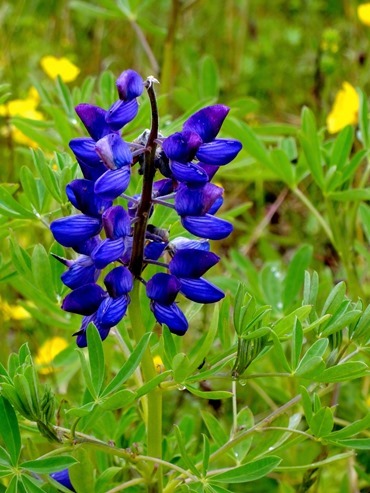 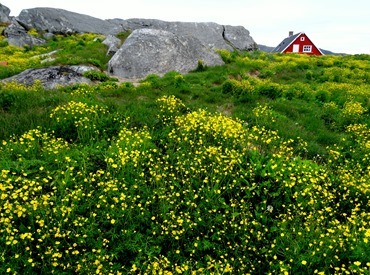 Last but not least before leaving town, here are a few random scenes that didn’t fit anywhere else. Among other things, there were more huge ravens here & very craggy peaks I understand were carved by glaciers. 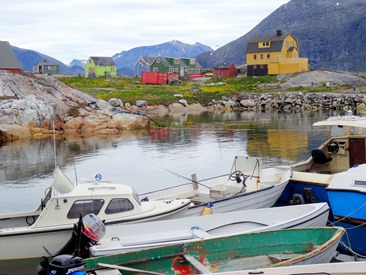 So we left this colorful & friendly remote town & tendered back to the ship.  From there the icebergs in the harbor could be seen clearly & we saw a few more as we sailed carefully away for a two day sail to Iceland. I like icebergs, so I will share a few with you. 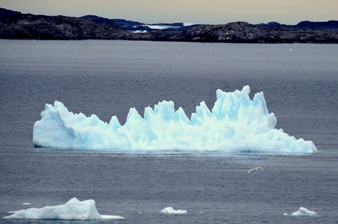 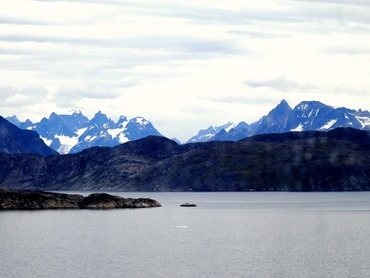 Finally, a couple of towel animals to tide you over until we reach Iceland.