We spent Sunday, January 10, transiting the Panama Canal, a true wonder of 20th century engineering.  We had done this once before, almost exactly 4 years ago during our 2012 South American cruise, which is memorialized in this posting:

We had to get up early in the morning because we were set to approach the first set of locks at Gatun about 7:30 AM.  The bow of the ship was opened for this transit (it is usually inaccessible to passengers) so we went there to watch.  The crew dispensed coffee there, along with “Panama Rolls,” tasty sweet rolls with a sort of peach filling that we were told derive from a Filipino delicacy.  As we approached the first lock we saw another Holland America ship, the Zuiderdam, already inside the first lock in the other lane to our right. 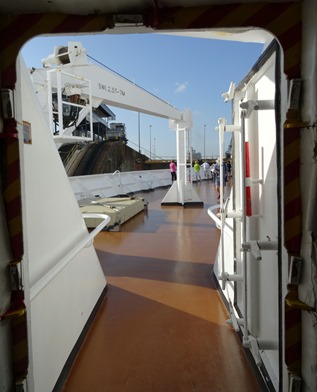 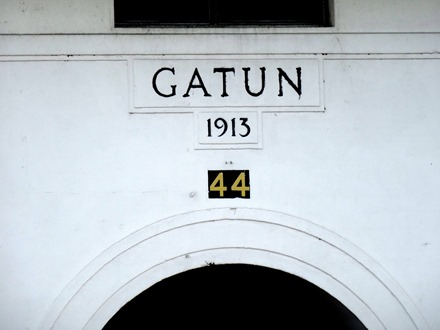 The lock doors are massive.  They swing open from the center & are flush with the side wall when fully open.  A handrail across the top for pedestrians folds down when the doors open.  Like much of the equipment here, they were manufactured in the United States (Pittsburgh) more than 100 years ago.  We were told that 90% of the original equipment is still in use after more than a century! 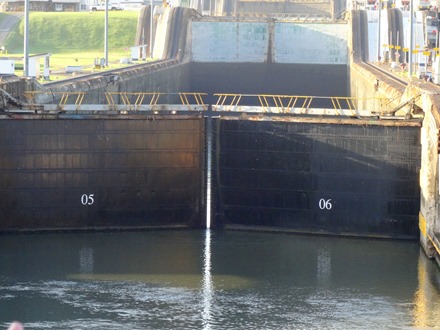 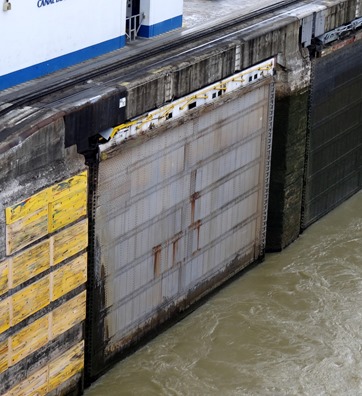 Several kinds of birds flew around the ship as we entered the canal, alighting on posts & taking off again.  We are told that crocodiles also live there and are sometimes sighted from the ships.  The Captain announced a sighting of one just before we entered, but we did not get to see it. 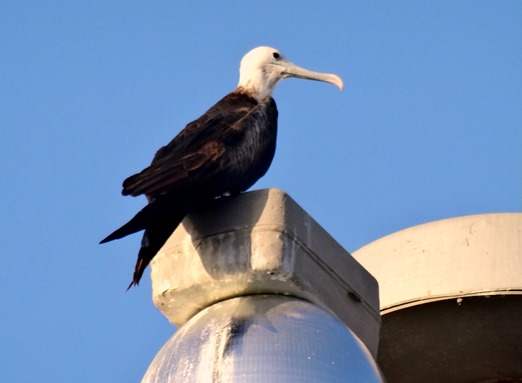 Along the top of the walls of the locks are railroad tracks for the “mules,” vehicles resembling small railroad engines that have no trouble climbing the steep walls as they rise from one level to the next.  They are attached by cable to the ship, one on each side in front and another pair in back.  The ship powers itself through the lock and the function of the mules is just to assist in keeping the ship aligned in the center without rubbing against the walls.  Not easy, since there is very little leeway between the ship & the wall of the lock.  The current mules are the third generation; we passed one of the first mules preserved on display. 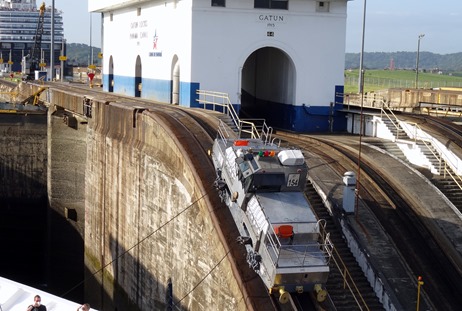 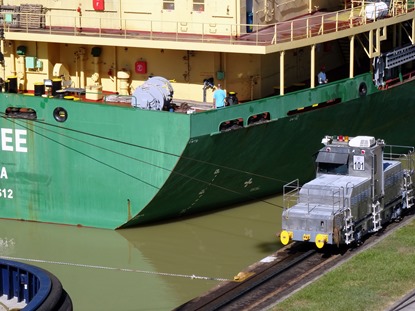 The old map of the Panama Canal below shows that after traversing the Gatun locks on the left you sail across the large Gatun Lake.  This lake was created by damming the Chagres River, which is now the source of the water pumped into the locks to lift the ships.  When a lock is emptied to receive the next ship the water flows into the sea, so an immense amount of fresh water is needed to keep the locks working 24 hours a day. 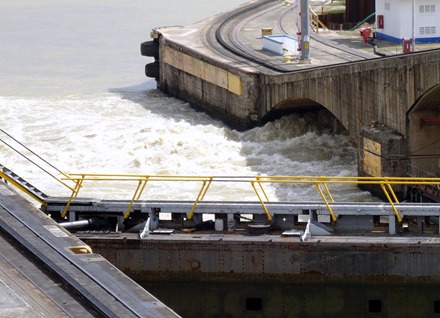 We spent most of the long sail across the lake sitting on deck chairs.  This is a rain forest & the shores of the lake & the large island in the middle are lush with vegetation.

After the lake comes the Culebra Cut.  This was the toughest part of the canal to build, since it involved digging through rock hills, which were unstable enough that debris kept collapsing into the channel from the hillsides.  Much of the hillside along the Cut is terraced to help stabilize it & in some places there are braces driven into the walls.  One of the hills was known as the Gold Hill because it was promoted in France in the 19th century during the unsuccessful French attempt to build a canal as containing a very rich source of gold.  A lot of Frenchmen lost their pants investing in this fraudulent promotion, for there wasn’t a trace of gold there. 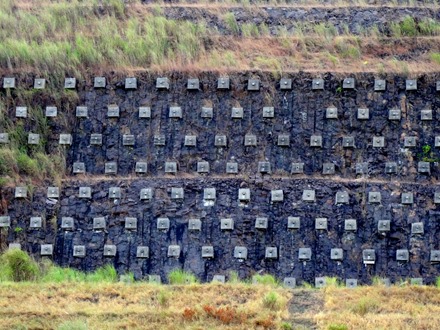 As you approach the Pacific end of the canal there are two bridges and two sets of locks to lower the ship back down to ocean level.  The first bridge is called the Centennial Bridge, which is just before you reach the Pedro Miguel locks.  This bridge is not very old, but we were told that it will have to be torn down & rebuilt because it is too low to accommodate the much larger ships that will begin coming through when the new locks (discussed below) are completed. 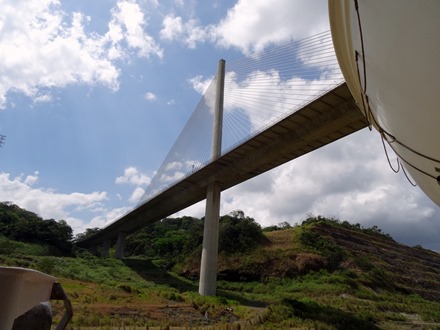 At the Pedro Miguel locks we saw a container train pass by.  There has been a railway here since long before the canal was built (although it was upgraded during the canal work).  In 1849 the Panama Railway was an important route for adventurers from the eastern United States headed to California for the gold rush.  And many of them died here of disease after they ran out of money and were unable to book passage to California.  Depending on the cargo, some shippers today find it less expensive to unload containers onto the train and reload them onto a ship at the other end than to pay the cost of traversing the canal.  This can go up to almost $500,000 for a ship, payable in advance in cash.  The toll is calculated mostly based on the size of the ship.  The smallest ever was about 35 cents for Richard Halliburton, who swam the canal in 10 days in the 1930’s. 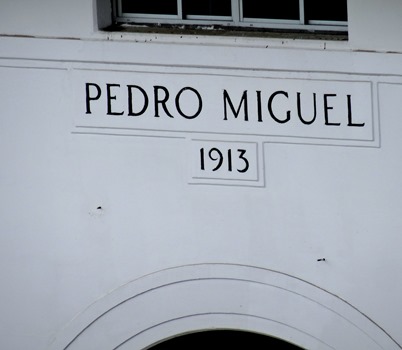 Not far from Pedro Miguel is the final set of locks at Miraflores that lowers the ship to the level of the Pacific Ocean.  There is an observatory building here where folks can come and watch the ships pass through the locks.  It has viewing verandas on four levels and, since it was a nice Sunday afternoon when most people were off from work, it was packed with people waving and taking pictures of us as we took pictures of them.  Meanwhile, on the front deck we spotted evidence that there is no age limit for the use of selfie sticks.

Just after leaving the locks we got our firsts glimpse of Panama City on the other side of the hills on our left.  In the distance on the right is the construction site of the new locks being built to accommodate larger modern ships that can’t fit through the current locks.  Several ports on the East coast of the United States are enlarging their harbors in anticipation of these larger ships coming from Asia.  The new locks were supposed to be opened for the canal’s 100th birthday in 2014; now they are saying they will open this Spring, but it doesn’t look ready from where we were. On our left we also passed some old army barracks built during American control of what was then known as the Canal Zone, and some people boating along the shore. 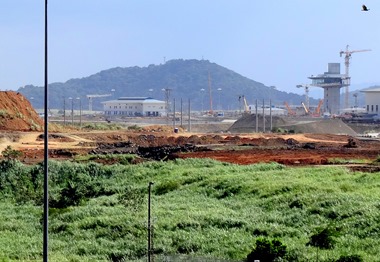 Just around the bend after Miraflores locks we came to the Bridge of the Americas.  This is part of the Pan American Highway, which extends from Alaska (I think) all the way to Patagonia at the tip of South America.  The canal’s two bridges are now all that connect North and South America, since the canal broke the continuity of the land bridge through Central America. 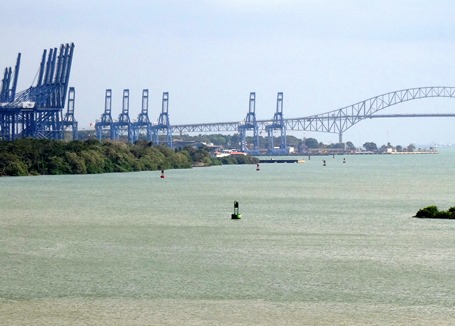 We now had to sail down to the ocean and around some islands to our anchorage for the night off Panama City.  We were told that the islands we sailed around at the mouth of the canal, connected to the mainland by a long causeway, are entirely man-made from debris removed from the canal when it was built.  The causeway, about 3 miles long, was designed to prevent the ocean currents in this area from silting up the mouth of the canal.  The dramatic clouds over Panama City when we arrived soon let loose a downpour, but it was over before sunset lit up the city, a lovely end to a long and interesting day.