At Sea, Sailing Toward New Zealand

We had four days of sailing between Rarotonga and New Zealand.  During this period we crossed the International Date Line (which is imaginary, so no picture of it) & we each received a nice certificate signed by the Captain to memorialize it.  We went to bed on January 27 & when we woke up it was January 29.  It’s an odd feeling.  When Mark Twain crossed this line (recounted in his book Following The Equator) he was worried that the world would be thrown out of whack if some people were launched into a different timeline one day ahead of the rest.  After some analysis he finally decided that about as many people crossed in the opposite direction & lost a day as those who gained a day, so things would balance out in the end.  In any event, we can confirm that living a day in the future (for you) does not enable us to hit the jackpot by learning the Super Bowl score before the game was actually played. 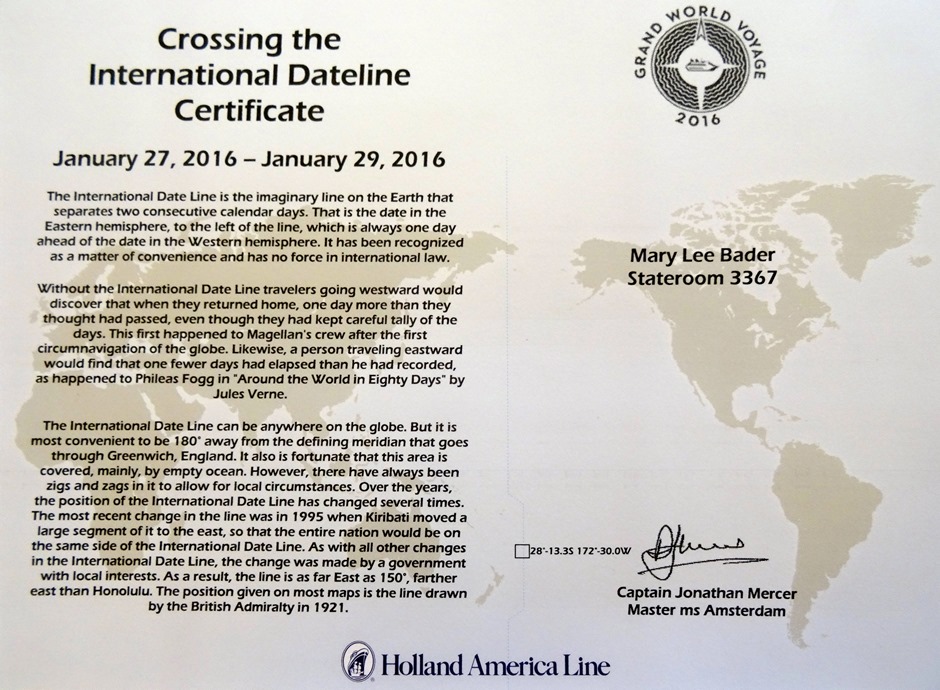 On grand voyage cruises HAL occasionally leaves gifts in your cabin while you are at dinner, mostly on Gala Nights (which just means you have to dress up a little for dinner, & Adagio plays during part of your meal).  About a week before Rarotonga we had received copies of “The Happy Isles of Oceania,” Paul Theroux’s book about his mostly kayaking trip through the islands of the South Pacific in the 1990’s.  It is a very interesting book, which Rick had read last year in preparation for this voyage, and it had an autograph inside, on a sticker on the inside page.  Well, it turned out that Paul Theroux was actually on the ship (many rumors to that effect finally confirmed). For those who don’t know, he is an American who has been a leading travel writer for more than 30 years (& a novelist; Mosquito Coast was made into a successful movie).  He did a Q & A session in the Queen’s Lounge on January 29, then autographed books for quite a while in the Atrium (it was a very long line & we were told he autographed some 300 books).

Every night there is a show, usually be a guest entertainer, in the Queen’s Lounge.  We often attend the 10:00 performance, which is scheduled for late eaters like us.  They are usually on board for a week or so & can be seen around the ship.  On January 30 we had a show by Bobby Brooks Wilson, who is the son of the great singer Jackie Wilson.  He looks & sounds a lot like his father & he put on a very energetic & enjoyable show.  He loves to sing & sometimes spontaneously joined in on some of the smaller music venues on the ship.  On February 1 (technically beyond the timeframe of this episode) he stopped by the piano bar to sing with Debbie Bacon.  It was a rousing performance & everyone had a great time.  Even Paul Theroux was there at the bar, clapping along. 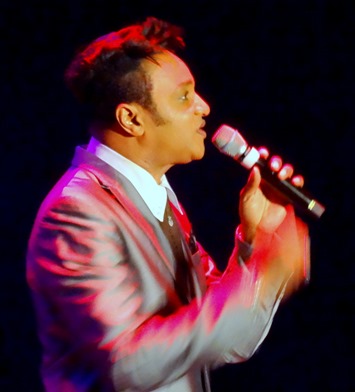 On the afternoon of January 30 we came across some wildlife.  First, it seems that a bird had accidentally hitched a ride on the ship from Rarotonga.  It looked like it might have been injured and unable to fly and was hiding in the shadows on the walking deck.  We hope it made it to New Zealand & a new life.  Then later the ship encountered a group (pod?) of dolphins cavorting nearby.  By the time we made it out on deck they were some ways off the starboard deck, but still looked like they were having a good time. 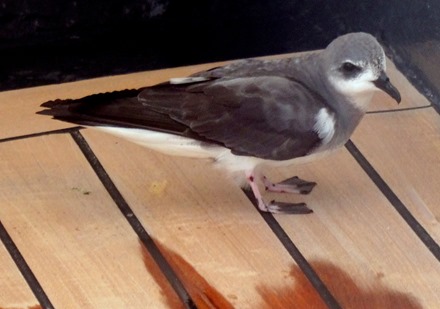 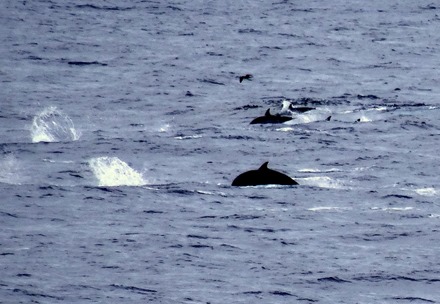 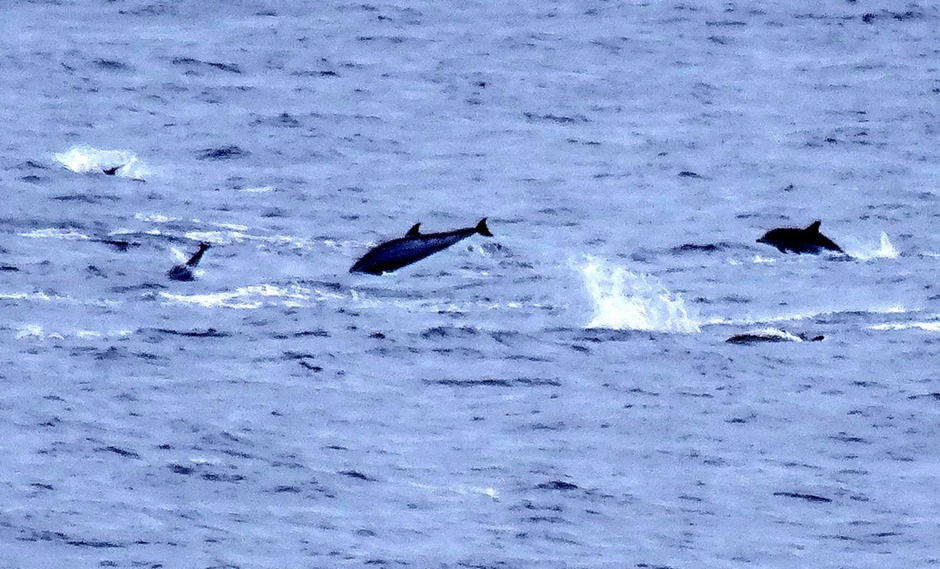 Since Papeete a Maori cultural team had been on board.  The Maori are the original inhabitants of New Zealand, Polynesian immigrants from (perhaps) the Cook Islands.  Like the Polynesian group on board before Papeete, this group taught classes in Maori language, culture, music & dance.  On January 30 they gave a performance of Maori dance on the main stage in the Queen’s Lounge.  The leader of the group (whose name we have forgotten . . . Maori names and words seem rather difficult for Westerners) is a college professor & official of some New Zealand cultural boards.  If I understood correctly, the other four are (or have been) students of his.  His group came in second in the last national Maori dance competition.  I must say, the first time I passed him in the hall near our cabin I did a double take.  But he is quite erudite. 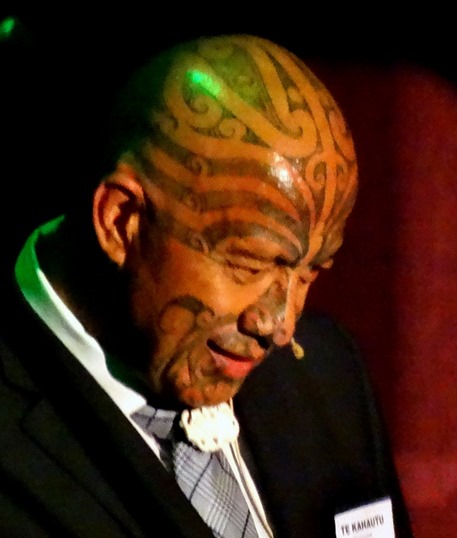 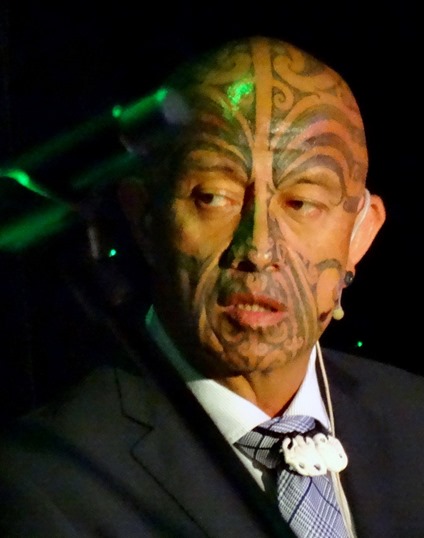 The Maori have a long history of tattooing like this, as you will see in some of the artwork that will be in the next episode.  Women traditionally had tattooed chins; today the dance competitors often apply removable tattoos for performances (as I think was the case with one of the performers on board).  The lighting on stage was poor & we were sitting in the balcony, but we have some decent pictures of the dancing. 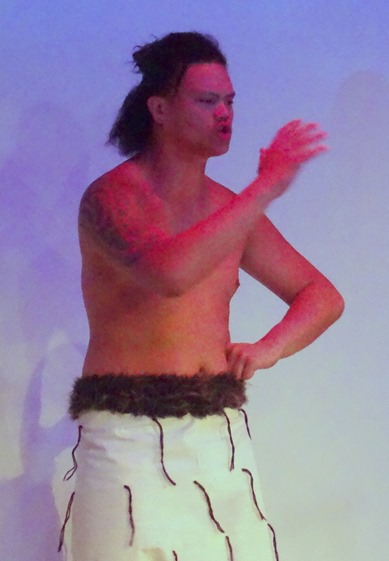 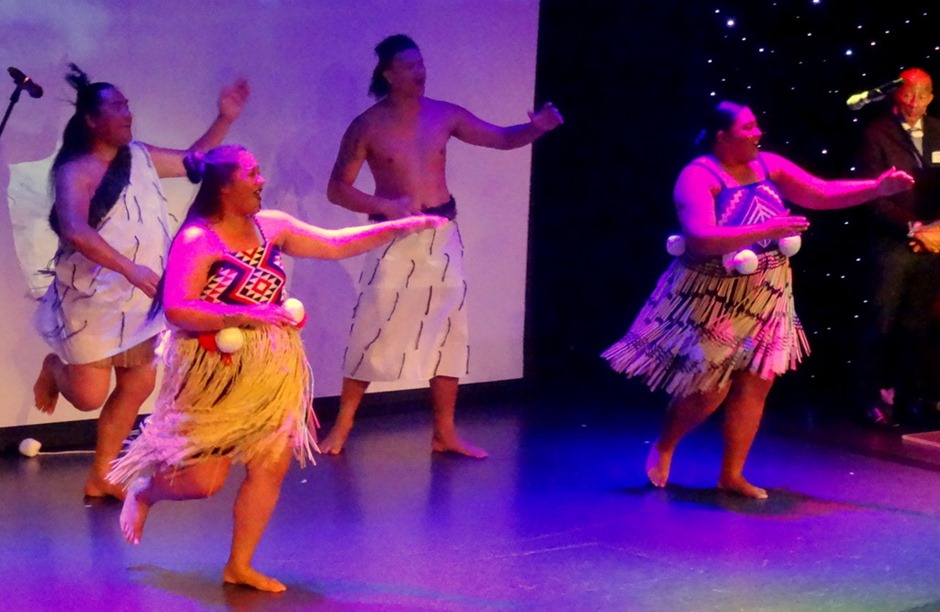 They performed 6 or 7 different dances, but we can highlight two of them here.  One is the Poi, which involves the women swinging those white balls tied to their waists in very fast circles.  It is designed to demonstrate manual dexterity. The Maori team had given dance lessons to the few children on board Amsterdam & they joined the Maori’s onstage for a performance of the Poi. 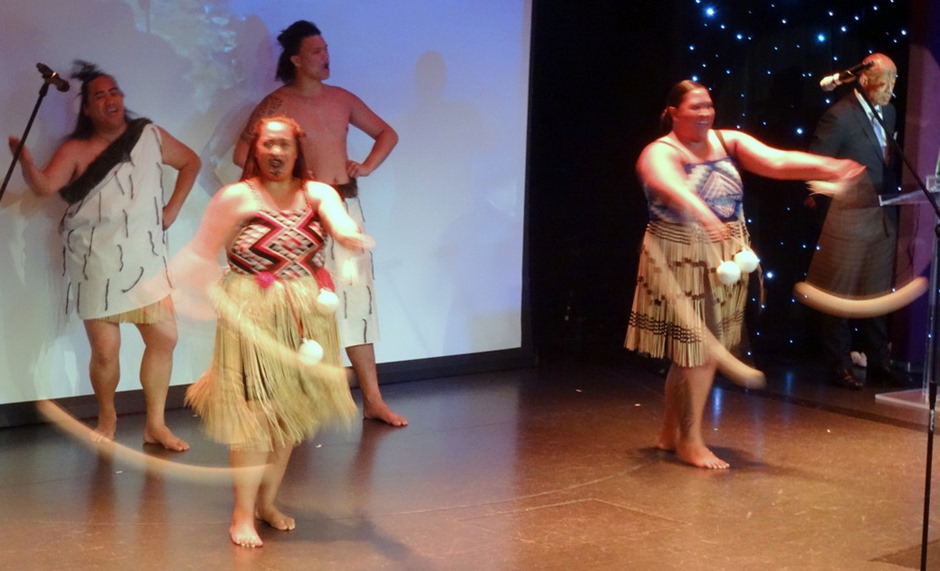 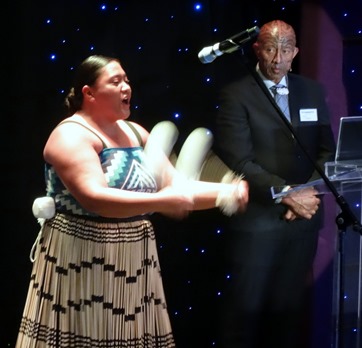 Probably the most famous Maori dance is the Haka.  This is a dance for intimidation of enemies or potential enemies.  Along with a lot of fist pumping and aggressive movement, Maori try to intimidate opponents with scary faces, opening their eyes extra wide and sticking their tongues out & down.  Rugby fans (I know at least one is reading this) may recognize this because New Zealand’s world champion All Blacks rugby team (just a name, the players are not all black) do this dance before each of their matches to put fear in the hearts of their opponents.  It seems to work.  The children were invited back to perform this dance as well. 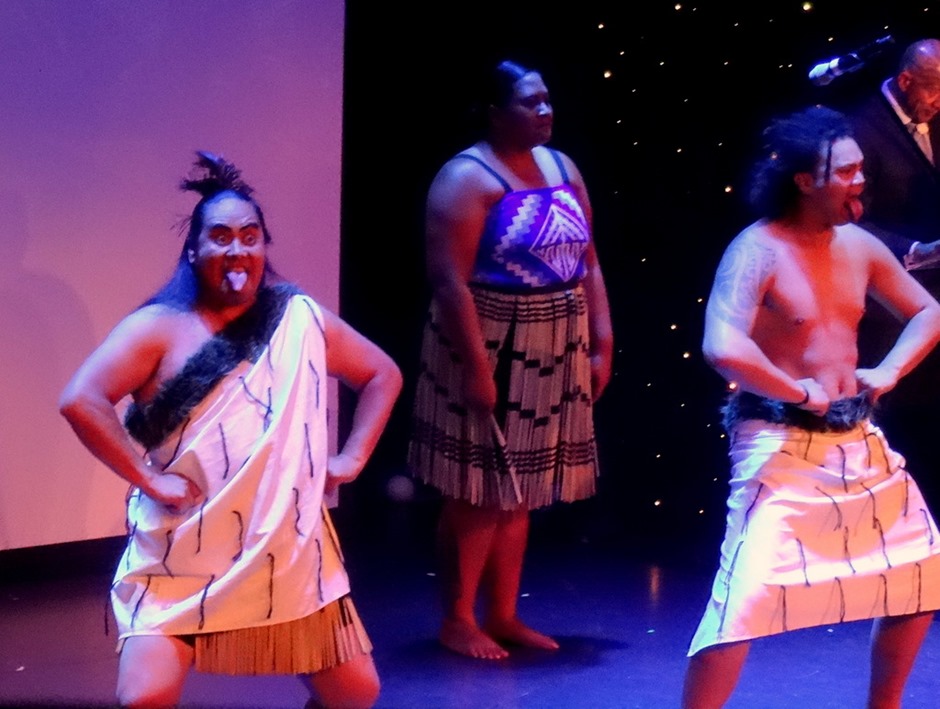 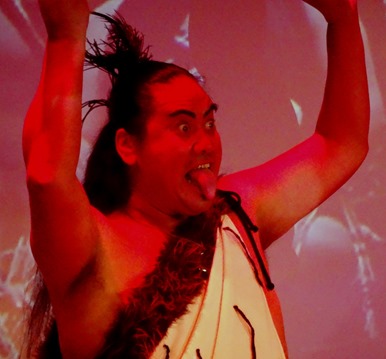 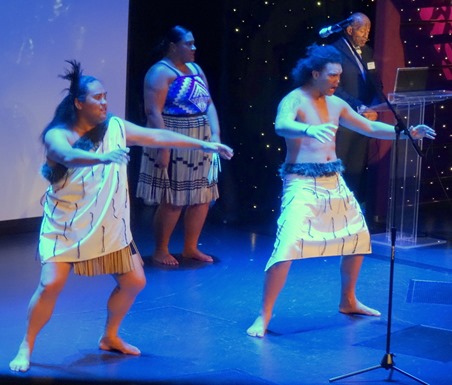 Well, that’s all the Maori pictures until we get to New Zealand.  But we can’t end this shipboard episode without some of the cute little shipboard towel animals.