The Amsterdam entered the Panama Canal at 7:30 on the morning of January 9.  This is our third time through this canal, so we were not planning to be up that early to be outside before reaching the first lock.  However, the Panamanians provide guides to narrate the passage of the canal & ours began broadcasting on the ship’s loudspeaker system at about 6:30, and since one of these speakers is on the deck outside our window that was the end of sleep for us.  Still, we took our usual time to shower & dress before wandering outside, so by the time we got there the ship was already inside the first lock at Gatun.

While we will post a lot of pictures here, for a much more comprehensive review of a Panama Canal transfer take a look at that episode of the blog from our 2016 world voyage here:

That posting also has a link to the episode recounting our first Panama Canal passage, on the Grand South America Voyage in 2012.  So, if you are interested in the canal there is plenty to see in addition to what is set out here.

In contrast to the beautiful morning sun on our last visit, the weather was gray & overcast as we entered the Gatun locks on the Caribbean side of the canal.  The weather proved highly  changeable during the day, moving from cloud to sun to rain repeatedly & often very quickly, so that folks outside taking pictures had to run for the doors.  We followed the Azamara Quest through the canal, passing the Gatun control building with the help of the “mules,” a sort of tractor on rails that helps keep the ship on a steady course through the tight space between the canal walls.  The bow of the ship was opened to passengers for the transit of the canal & in the morning coffee & delicious “Panama Rolls” were served there.  Interestingly, the massive gates between levels of the locks are all still the originals, installed more than 100 years ago. 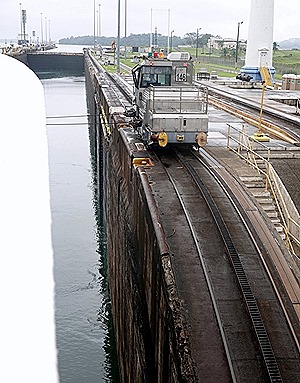 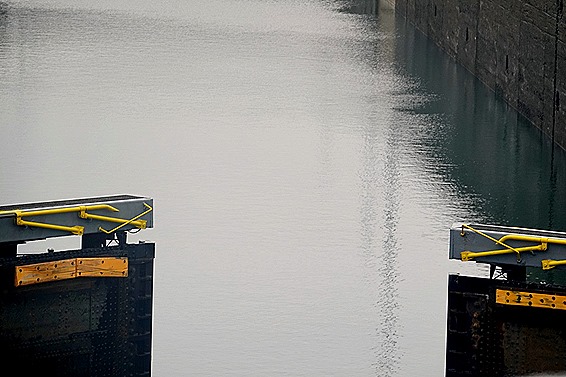 After leaving the Gatun locks we sailed across Gatun lake, a body of water that is probably the largest segment of the canal.  It passes through dense rainforest, but is pretty uneventful. So we went to breakfast, then we went up to the Crow’s Nest for most of the transit.  The Crow’s Nest is a multipurpose room on the top inside deck, a venue for parties, for reading, for activities such as Zumba in the morning and a disco at night.  It has a bar and a panoramic expanse of windows across the front of the ship.  Many passengers seem to spend a lot of time up here. 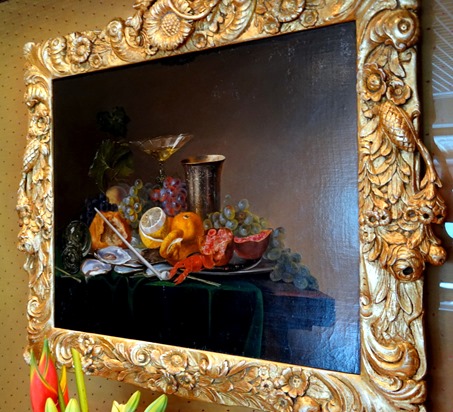 As we sailed through the lake we passed a huge container ship coming the other way, called the Houston Bridge, we think.  This is one of the world’s largest container ship with a capacity of some 11,000 containers, each of which is the size of the payload of a tractor-trailer truck.  Until last year ships this size could not use the Panama Canal, but a little over a year ago they completed a new, larger set of locks on each side that can accommodate these giant “Panamax Plus” ships.  These ships still use the central portion of the same old canal, but enter & exit through the new larger locks.  The Panamanians charge by weight to traverse their canal; a ship the size of Amsterdam pays about a quarter of a million dollars for one passage, so these new ships must be paying a lot more.  We also passed several dredges, employed to scoop muck from the bottom to ensure the canal does not fill up with silt.  This is, we were told, a never ending process. 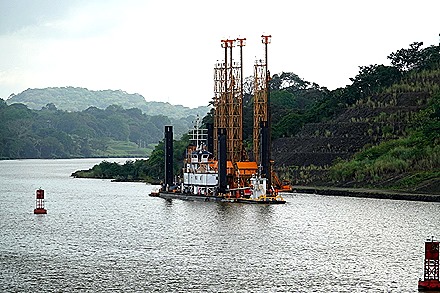 Following us through the canal was a strange looking armored ship.  We were told that this is the Pentagon’s newest intelligence ship & the extra plating includes stealth technology that obscures it on radar.  It is too wide for the original locks & instead passed through the new locks.  We speculated that maybe it is headed for the waters off North Korea. At one point a tugboat pulled around & pushed us for awhile; no idea why.  Soon we came to the Centennial Bridge, built (guess when) in 2000.  This area is known as the Cut,  It was blasted out of solid rock during the building of the canal, perhaps the most difficult & dangerous part of the project.  The walls are terraced to help keep debris from sliding down into the canal. 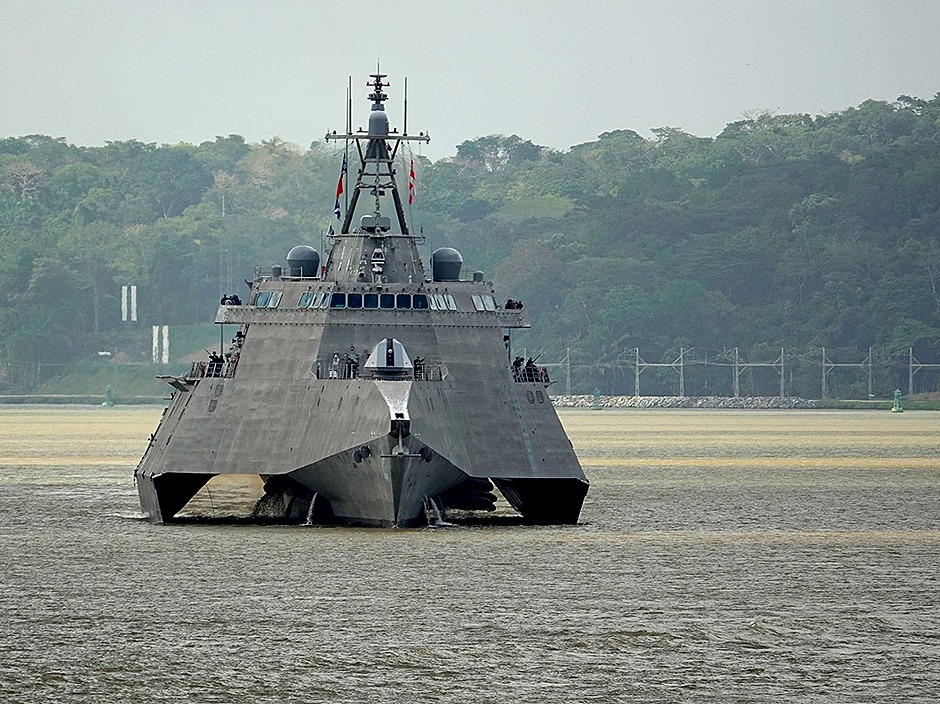 On the Atlantic side the Gatun locks raised the ship three levels.  On the Pacific side the Pedro Miguel locks lower it two levels & the Miraflores locks lower it one more level to reach sea level again.  As we approached the Pedro Miguel locks we could see the new larger version to our right.  On the left was a tree dressed in bright yellow that we were told only blooms for three days a year. 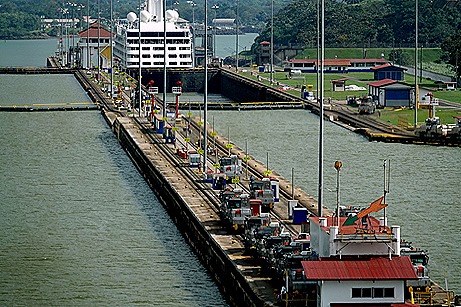 The Miraflores locks only drop one final level, but as you go through on the left is a building housing a museum that always has hundreds of people on the balconies welcoming you.  They wave & take pictures of you while you wave & take pictures of them.  On our right we could see a big ship going through the new channel & locks, but we couldn’t see the locks themselves because there was a hill in front.  We noticed that the Panamanian flag was at half staff all day & learned later that it was a holiday. Martyr’s Day commemorates a student uprising in 1963 against the Americans for reneging on an understanding that the Panamanian flag could fly along with the American at schools in the Canal Zone (if I have this right). Some 21 students & one toddler were killed as students tried to shimmy up a flag pole with a Panamanian flag.  The next day we saw a monument to these students. 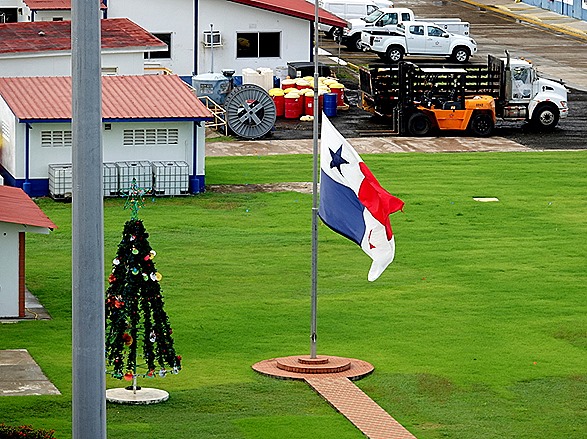 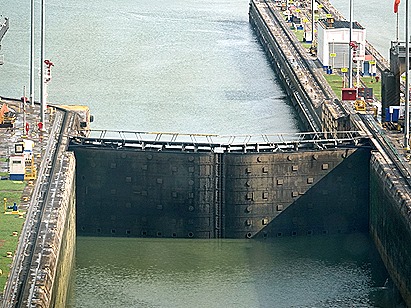 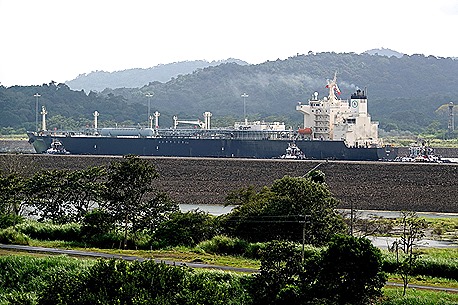 After finishing with the locks we sailed on to Fuerte Amador, a group of connected islands off the coast of Panama City, near which we anchored.  The islands are connected to the mainland by a causeway on top of a huge breakwater that was built with rocks & dirt removed when digging the canal.  In this last part of the canal we could see some of the towers of Panama City beyond the hills, above an old American military barracks.  We passed under the Bridge of the Americas, which connects North & South America, completing the Pan American Highway that extends all the way from Canada to Patagonia. And on one side was the modern ecological museum designed by noted architect Frank Gehry. It looks a little like a brightly colored building that has collapsed into a heap. 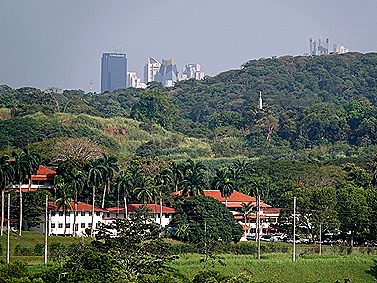 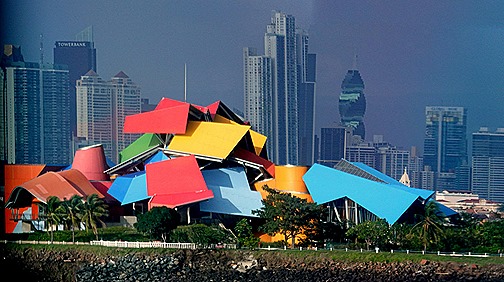 Tenders were running to Fuerte Amador during the evening, but not many went.  We had a full day in Panama City in the morning (with yet another early wake-up call) so after dinner & a show we retired for the evening. We heard later that those who went found there was nothing to do, so it was just as well.

This entry was posted on May 6, 2018 by Rick. It was filed under Around The World Again .