We stayed in Tahiti overnight and sailed for Moorea at 5:00 AM, arriving in beautiful Opunohu Bay by 8:00.  We had been scheduled to anchor in Cook Bay but the pier there was under renovation so we were switched here (Cook Bay is on the right & Opunohu on the left in the map of this heart shaped island below). 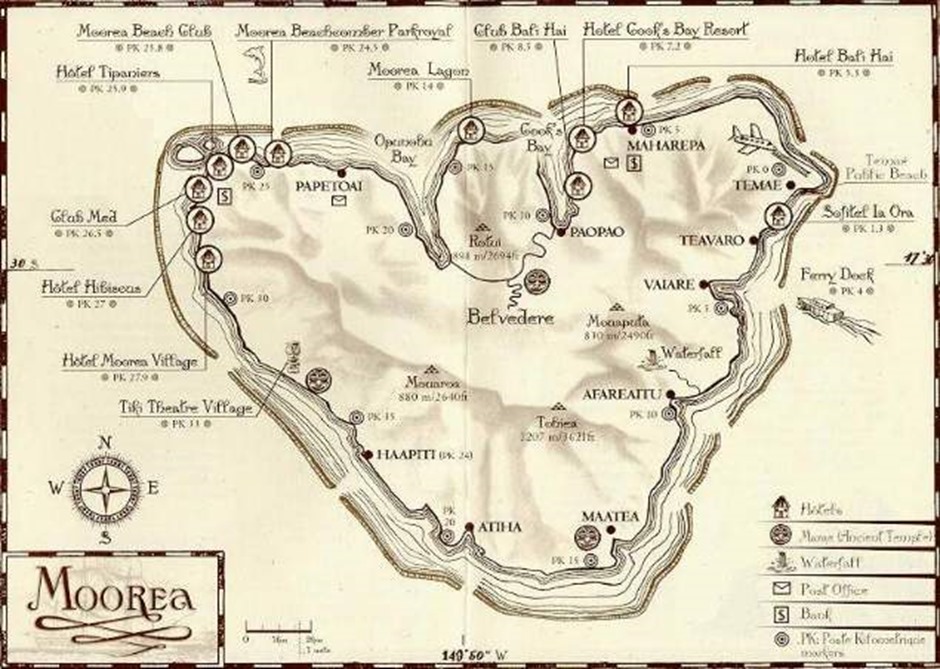 Someone told us that Cook Bay is more scenic, but I really can’t imagine anyplace more scenic than this (picture taken when we were leaving Opunohu Bay in the evening, since the ship was already anchored when we emerged from our cabin in the morning).  By the way, despite the name Captain Cook never anchored in Cook’s Bay; he anchored in Opunohu Bay like we did.  Go figure.  For those who haven’t guessed yet, this was the spot pictured in the teaser in our first small posting.

Moorea is said to be the inspiration for Bali Hai, the mysterious nearby island created by James Michener in his book Tales Of The South Pacific, the basis for the musical South Pacific. Michener actually was stationed in what is now Vanuatu during World War II & that is what he wrote about, but the view of Moorea from Tahiti shown in the previous episode of this blog sure is reminiscent of what it looked like in the movie.

This is a sparsely populated island (about 16,000 people) lacking good roads into the mountains beyond the coast.  So to get into the interior we took an excursion in open 4×4 trucks, which turned out to be an excellent choice, especially because it turned out we would be traveling with 3 of our 5 tablemates.  We tendered to a pier that is actually outside the bay, on the right in the picture above.  We were welcomed by the usual musical group in native dress.  Boarding our vehicles we drove first to a pineapple plantation.  The pineapples are grown on a hillside and are used primarily for juice.  Each plant can grow 3 pineapples, one at a time, before the fruit becomes too small to use.  Then all the plants are replaced.  Planting these prickly plants on these steep hills must be a difficult job. 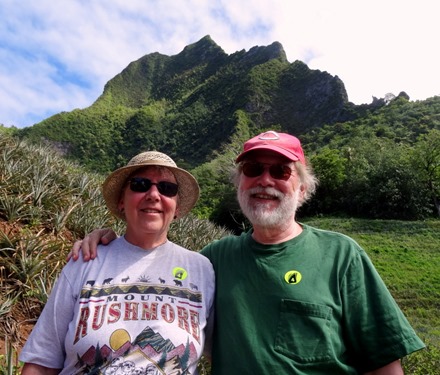 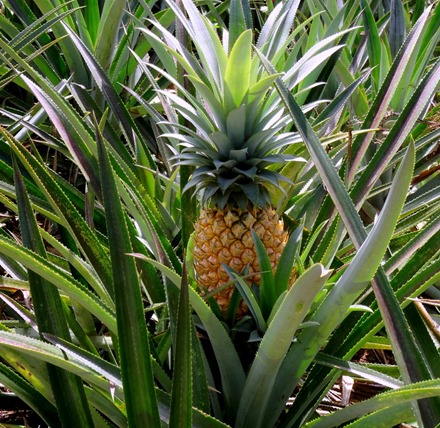 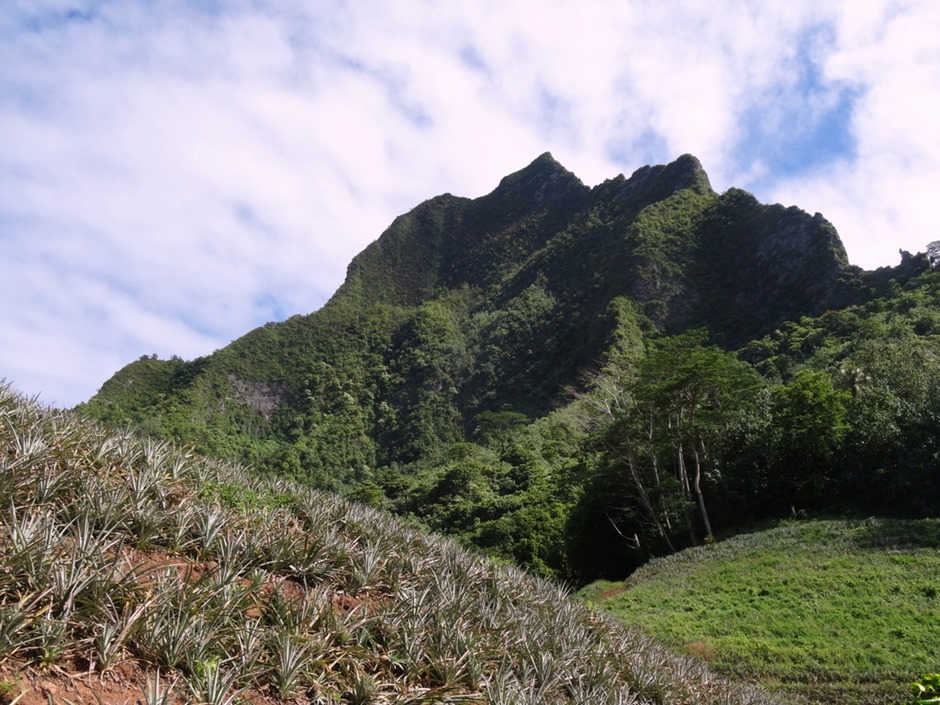 Next we went to a plateau surrounded by mountains (I think its called Opunohu Valley) which is what remains of the crater of the volcano that created the island about a million years ago.  All of the islands we visited are volcanic, which means that the visible island is only the tippy-top of a gigantic mountain reaching all the way to the ocean floor.  Anyway, this is a gorgeous valley with pointy mountains and one (Monaputo) with a hole through its top.  I mentioned before that South Pacific was filmed in Hawaii, but one of these mountains was used to represent Bali Hai on the movie poster (I don’t know whether it is the original or the remake).  One movie that was filmed here, in this valley and apparently in Opunohu Bay, is the 1984 remake of Mutiny on the Bounty. 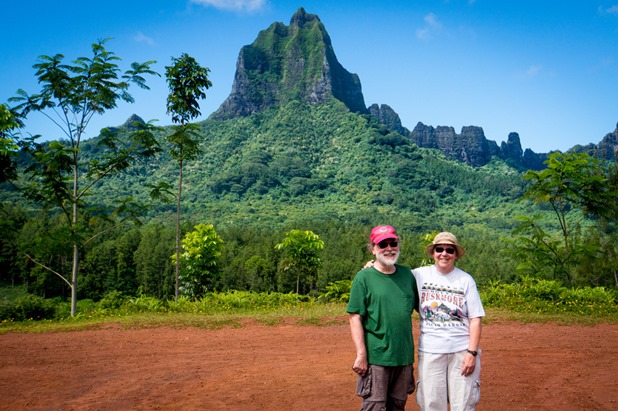 When Lee (in the last picture above) bent way over to squeeze out the back of the truck at our first stop, our driver Ari asked if he was having trouble.  When Lee stepped down & stood up Ari looked up & said “Whoa, I’m short!”  We left the volcanic valley and drove (over some pretty bumpy & uneven roads, all day) to Belvedere lookout.  This is located on top of a mountain between the two bays (Cook & Opunohu), with Mount Rotui between them.  It’s quite a sight. 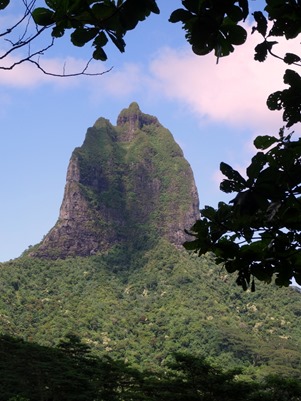 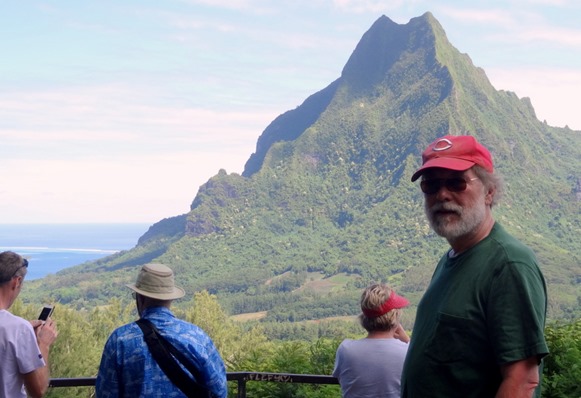 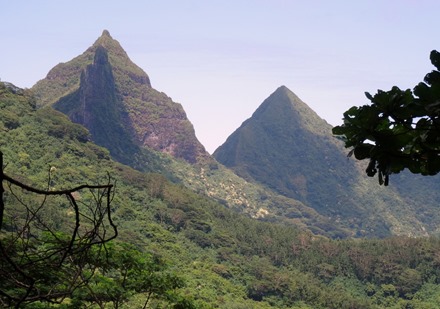 We drove halfway down the mountain and stopped at an archaeological site called Marae Afareaito.  We saw a reconstructed marae yesterday in Tahiti but this is the real thing, some 500 years old.  At one end is a platform for religious activities (men only, of course) & there were several flat stones stuck upright in the ground, looking a little like tombstones, that were used as backrests for chiefs during the proceedings there.  Nearby were a couple of smaller platform that were used for archery contests.  While there Pierre showed us some nuts (can’t remember the name) that were shelled & strung together on sticks, then lit & used for candles.  When burned all the way down the leave a very black ash which the Polynesians used for tattooing.  Note that the marae is made of stones fitted tightly together, without any mortar or cement. 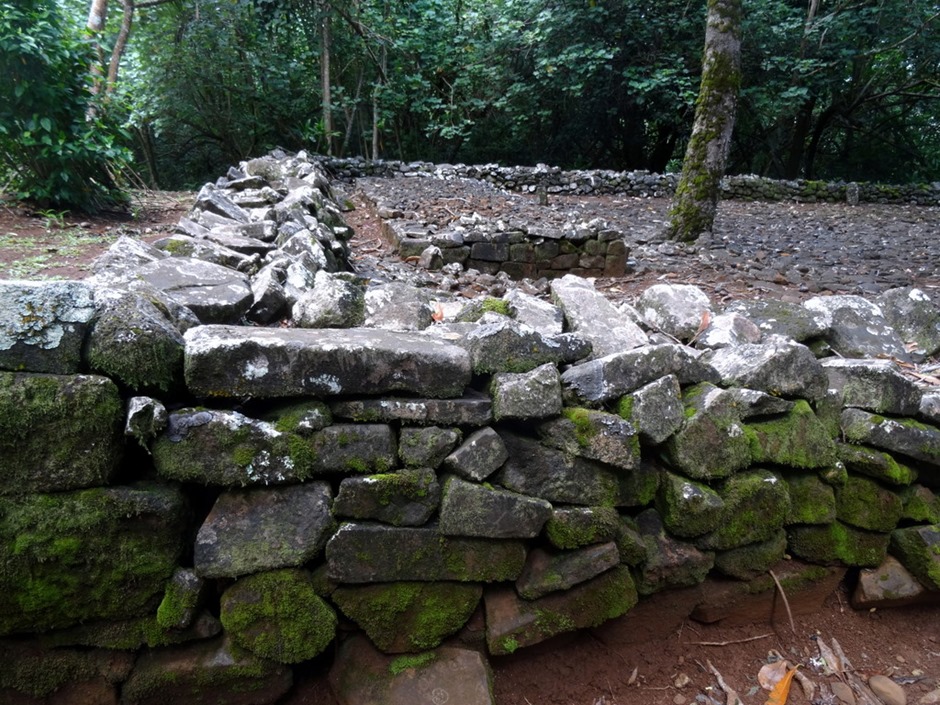 We continued on to a botanical garden that had a nice view of the ship in the bay.  I think it was called Jardin Kellum.  We saw a variety of fruits, trees & flowers here; we were told the names but most have been forgotten (if you know, feel free to say so in a comment).  There was also a greenhouse of vanilla vines, looking very much like green beans.  Vanilla is an important crop in these islands & they claim it is the best in the world.  We were given a plate with small amounts of each fruit to taste & they were all good.  There was also a stream with a fountain that looked suspiciously like a fertility totem. 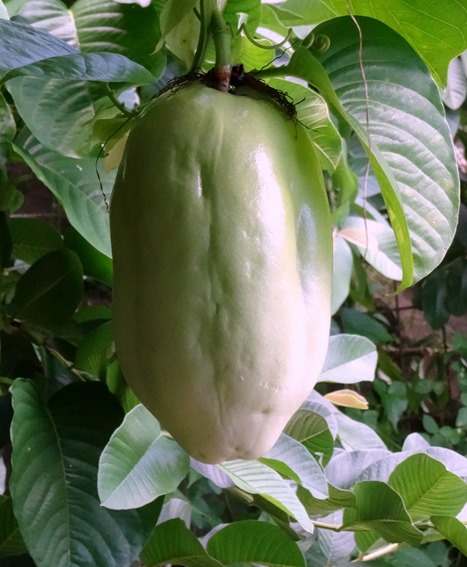 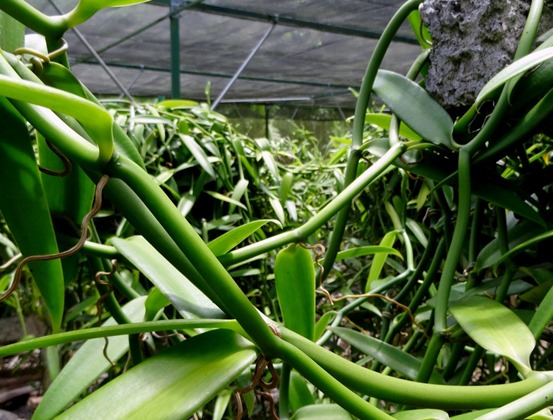 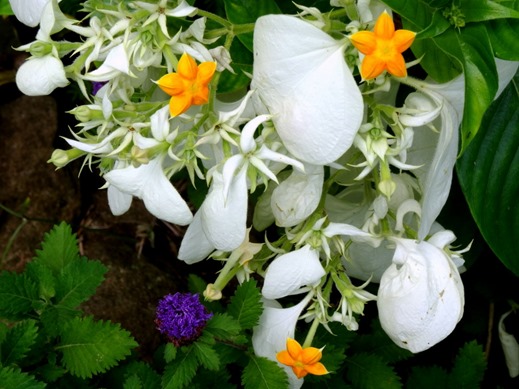 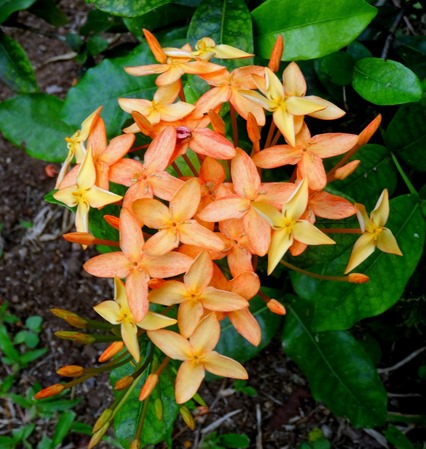 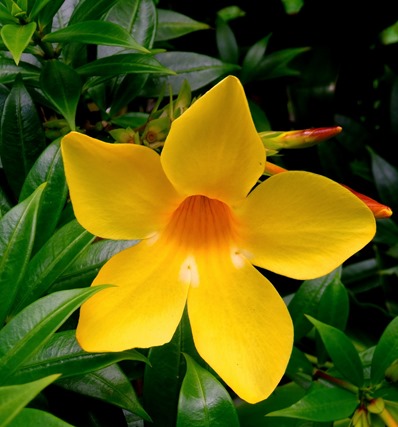 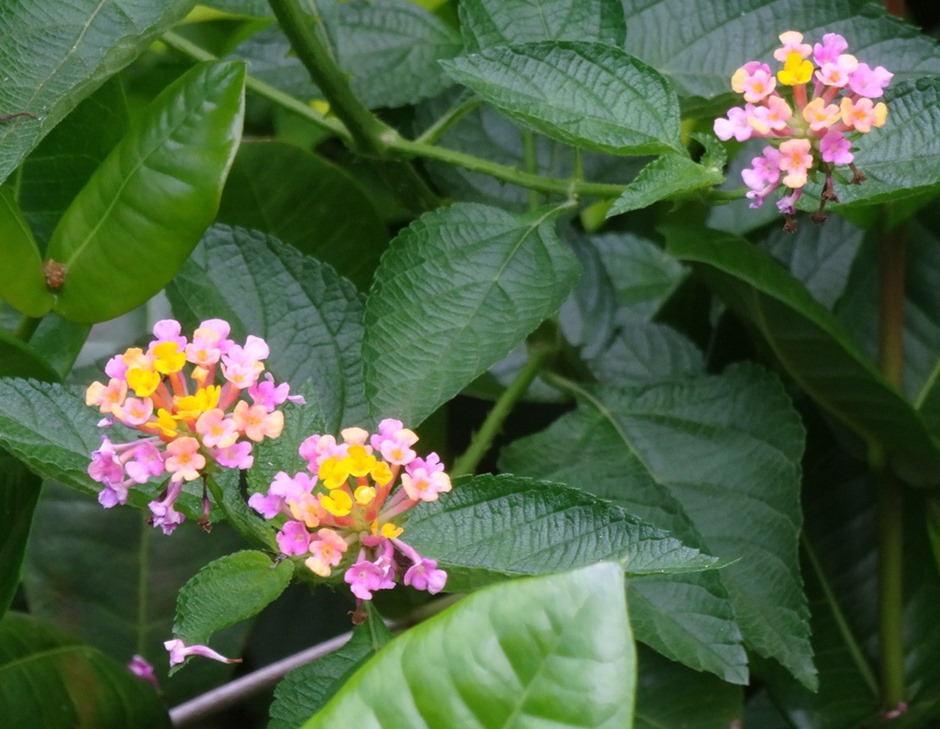 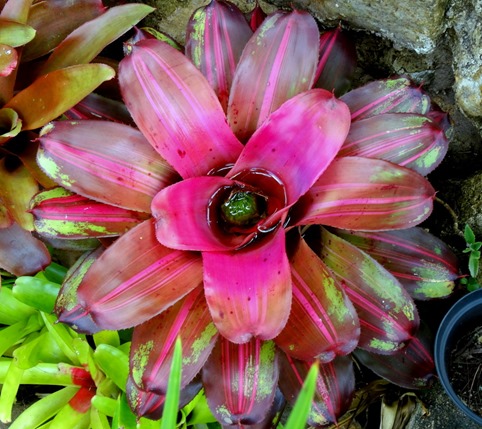 Last, but far from least, we drove up an uneven, narrow, windy road with no guardrail between the car & the steep dropoff, to reach Magic Mountain.  When we got to the end of the road we had to climb up a very steep & narrow cement path to reach the viewpoint at the top.  But it was well worth it, with views of the bay on the right & the coastline & lagoon where the tender docked on the left.  In the distance were a group of over-the-water huts, which are really very pricey hotels with glass floors to watch the fish.  They are generally associated with Bora Bora, but were in evidence on Moorea as well. 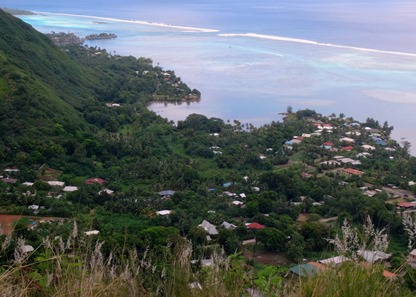 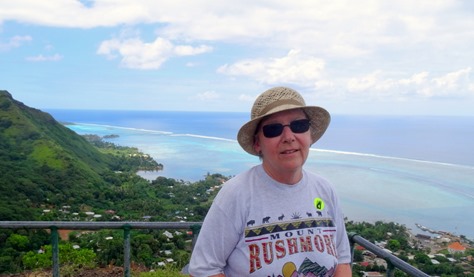 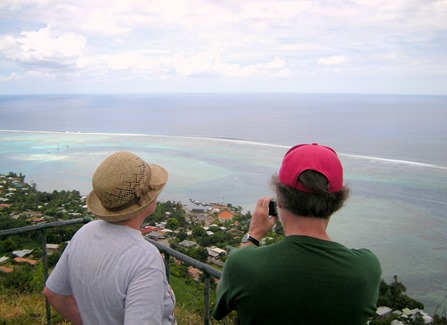 The excursion over, we returned to Papetoai, where the tender pier was located.  Here there is an octagonal Protestant church, called the Papetoai Temple.  First built in 1822 on the site of a destroyed marae, this is the oldest European building in Polynesia.  It was closed (this was a Sunday), but we were able to see through the glass door.  Behind was an unusual bell tower that looked like a ladder.  An open air building had been erected near the pier for craftspeople & pearl merchants.  We did some business there & returned to the ship.

It was a beautiful sunny afternoon as we sailed away & the bay & island looked stunning.  We passed the reef on our way out, protecting the lagoon from the heavy surf.  And later that evening there was a dramatic South Pacific sunset to cap a very good day. 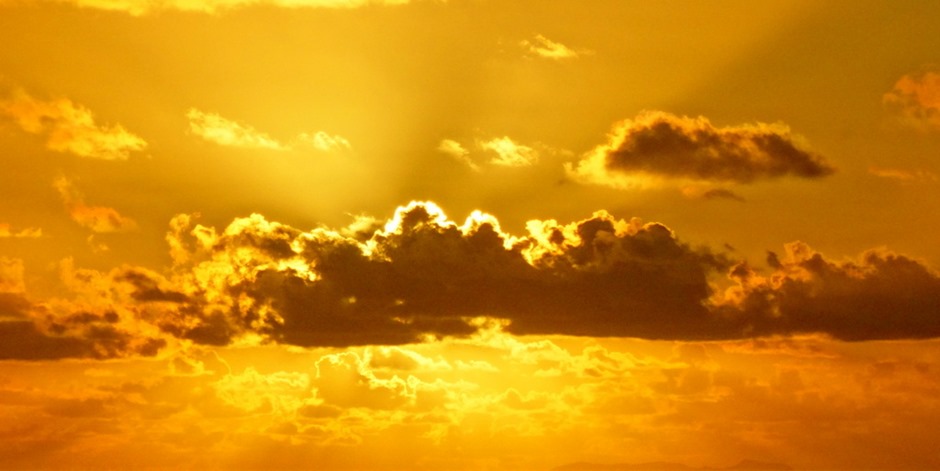 This entry was posted on February 16, 2016 by Rick. It was filed under Around The World .