We spent January 12 in Manta, Ecuador.  Ecuador is named for the Equator, which runs right through it.  Consequently, its climate is pretty much the same year round, and usually pretty hot.  Manta is the fifth largest city in Ecuador and the second largest port.  We visited here in 2012 and you can view that visit here:

Manta produces more tuna per capita than any other city in the world.   On our last visit we were fortunate enough to have a tuna boat docked next to us on which they were actively unloading their catch.  It was fascinating to watch.  No such luck this time, as we had tuna boats docked on the other side of our pier but no fish in sight.  They were loading clean nets, though, for their next outing.  The importance of tuna in this city is shown by the large statue of a tuna in the traffic circle where the pier meets the main street.

We spent most of the day on an excursion that took us to a museum of sorts and three craft workshops.  The museum was mostly devoted to displays showing how the indigenous people in this area lived.  This has been a thriving fishing area since about 500 A.D., but the Spanish conquistadors arrived in 1534 and within two years the indigenous population of about 20,000 had been reduced to about 50.  Sadly, this is the usual story and it is not only about Spanish brutality, since the people living in America had no defense to the European diseases the Spanish unknowingly brought with them.

After the museum we drove up on a mountain to the village of El Chorrillo. 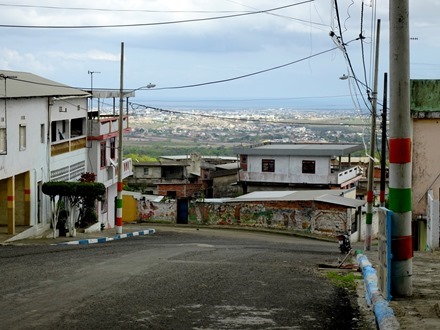 We visited a workshop there that makes sisal bags from the leaves of the Agave plant that grows in the area.  There was once a thriving market for these bags, used for carrying coffee and cacao by local farmers.  But the development of agribusiness and synthetic materials has undermined that.  We watched them derive fibers from the Agave leaves, mainly by pulling them apart, then refine the fibers by combing them.  They spin the refined fibers into thread and weave them into cloth. 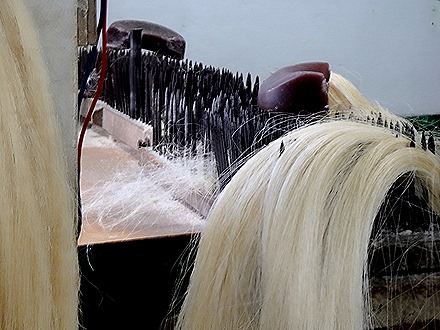 We drove then to a place called Ciudad Alfaro near Montecristi.  Montecristi is a mountain town just a few miles from Manta that was founded in the 16th century by refugees from Manta seeking shelter from pirate attacks on the coast.  It is famous as the home of Panama hats, which are actually made here and not in Panama.  They acquired the name because most international sales are made in Panama.  They were popular among US gold rush prospectors who came through Panama on their way to California and with workers on the Panama Canal.  Teddy Roosevelt’s photo wearing one when he visited the canal construction was widely published in the U.S. and greatly increased their popularity.

Made from the Toquilla Palm, these hats are strong, lightweight and breathable, very practical for warm weather.  A well made hat can also be rolled up tight (they are often sold rolled up into a small wooden box) and will regain their shape when unrolled.  They come in many grades of quality, from a standard hat for about $35 to a super fine hat that may sell for $1,000 or more.

We were told that true Panama hats are only made in Montecristi (and should say so on the inside hat band). Toquilla palm cultivation has been tried in other locations but only the ones that grow here produce the right kind of fiber.  At one time there were hundreds of weavers of these hats, but the work is  backbreaking and today there are fewer than 50.  The pictures below show women weaving hats in the traditional way and they bend over their work like this for some four hours at a time before a break.  It’s hard to imagine how they keep all of the small straw fibers sorted out, much less weave them together in tight stitches for hours on end. 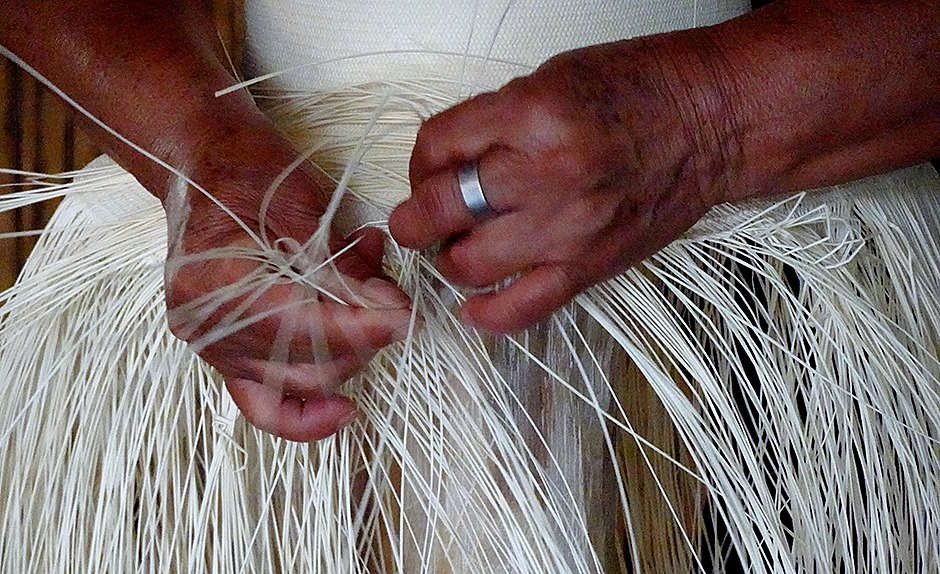 Ciudad Alfaro is an area showcasing many local crafts and it has a museum and we understand that legislators sometimes convene here as well.  It is high on a cliff.  Eloy Alfaro was president of Ecuador for a number of years around the turn of the 20th century.  He was an important reformer and is much revered.  We came across a statue of him later in the heart of Manta. 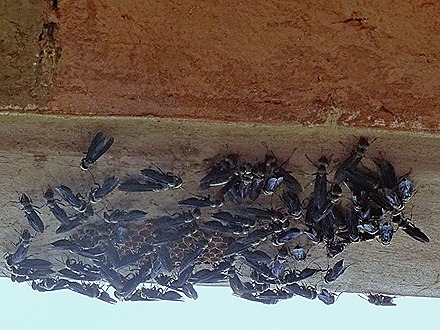 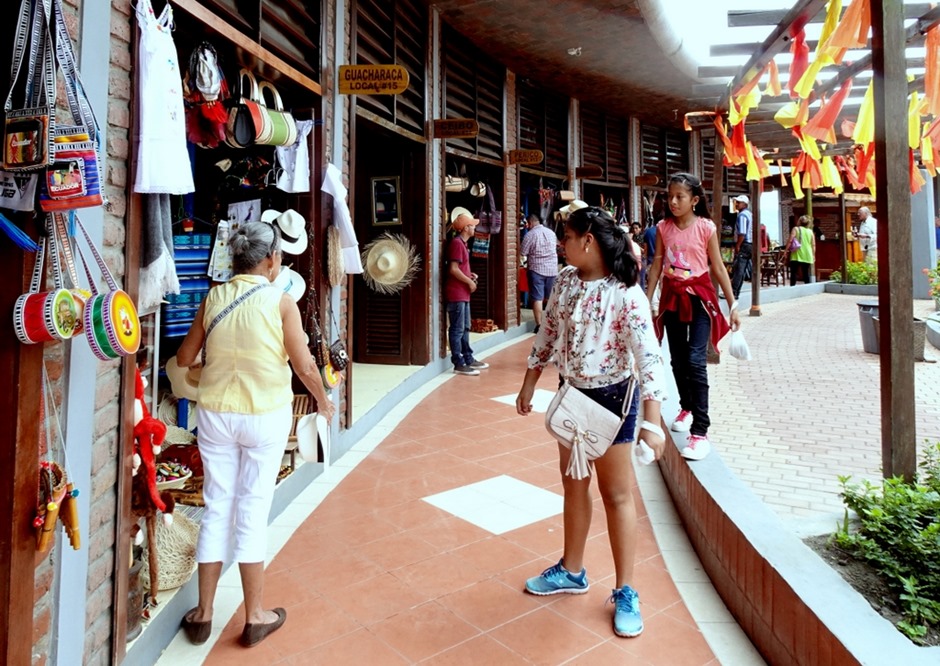 Our last visit was to a tagua nut workshop.  Tagua nuts come from the Ecuadorian Ivory Palm.  They are brown on the surface and white inside and are very hard, almost like stone.  Often called ‘vegetable ivory,” tagua nuts are carved into jewelry, figurines and buttons.  At one time tagua buttons were exported worldwide and commonly used on shirts, suits and coats, but the development of good plastic buttons dried up this trade.

When we arrived at the workshop thousands of these nuts were spread out on the grounds to dry in the sun.  They are so hard that our bus just drove over them without harming them.

Inside was a demonstration of how the nuts are refined and carved.  The tree fruit is large and contains many nuts.  One worker sliced a nut into rounds for buttons (using his bare fingers on a spinning saw) and then punched out a round button shape.  Then we watched an artisan make a small rhinoceros out of a single nut, using his bare fingers (he still had all of them) to push it against a spinning saw to carve each feature.  There was also an opportunity to buy some of his work (of course), much of which really was quite beautiful. 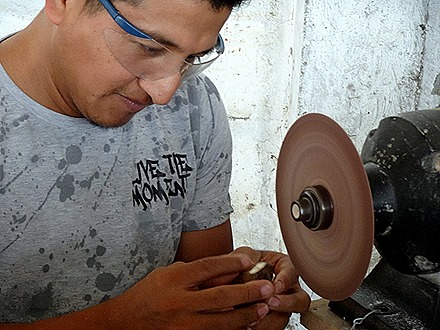 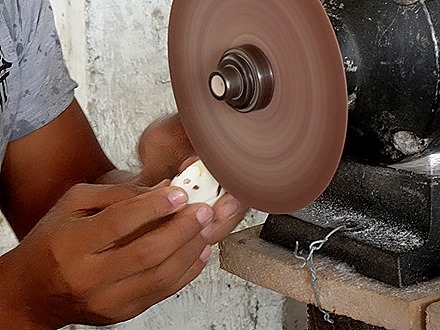 On the way back to the ship we passed a makeshift boatyard on the beach where fishing boats were being repaired.  The scaffolding is bamboo, just like we saw in Hong Kong last year. 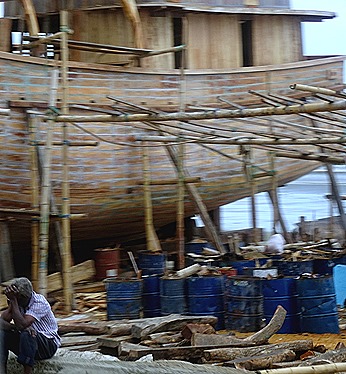 After returning to the ship we rode the shuttle bus into town to visit the craft market set up in a central square.  It was bustling with vendors selling jewelry made from shells, sculptures made of tagua nuts, Panama hats, t-shirts and other crafts and souvenirs. At the back of the square was a statue of Eloy Alfaro, who we had run into earlier in Ciudad Alfaro. 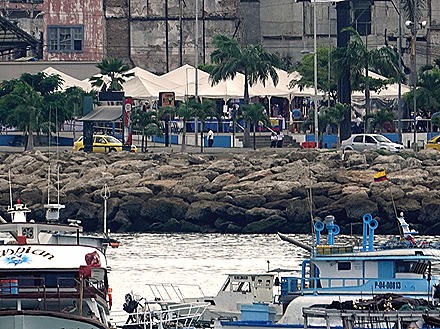 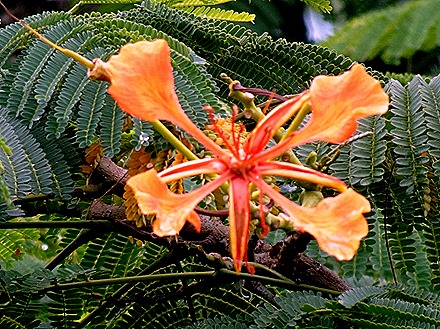